Tashiev was one of the most divisive candidates in the recent elections. 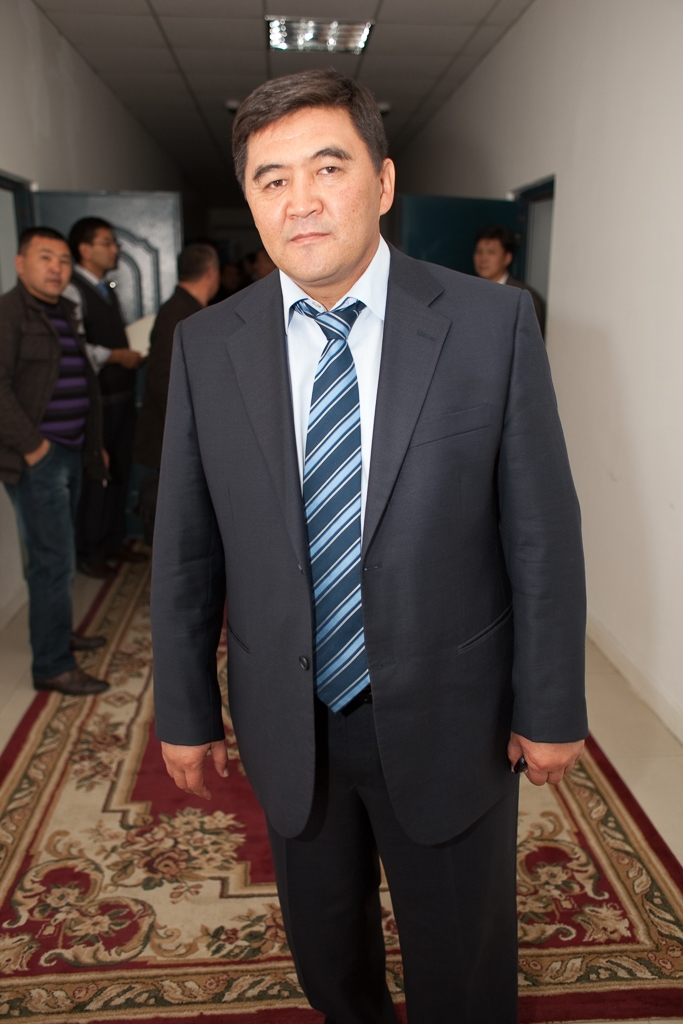 During Kyrgyzstan’s surprisingly peaceful parliamentary election campaign, Kamchybek Tashiev was one of the most divisive candidates. As a leader of the party with the most votes, Ata-Jurt, he is now set for one of the most prominent positions in a future government.

Ata-Jurt has been accused of nationalism and attempting to restore the unpopular regime that collapsed in April. Several top party officials were high-ranking members of ousted President Kurmanbek Bakiyev’s government, including Tashiev, who served for two years as Bakiyev’s emergencies minister. Tashiev has criticized the parliamentary system enshrined in a new constitution voters approved in June, called for a stronger president, and said the American airbase at Manas “should not be on the territory of our country.”

Yet thanks to widespread support in the South, Ata-Jurt (“Fatherland”) did better than expected on October 10, winning 28 seats and an advantage in the ongoing coalition building. Tashiev, 42, is originally from the southern province of Jalal-Abad.

Tashiev spoke with EurasiaNet in his party’s Bishkek headquarters on October 13. This interview has been edited for length.

EurasiaNet: Yesterday, one of your fellow party leaders said that the programs of the five parties that won seats in parliament are basically the same. How is the process of forming a new government going to work? How long do you expect it to take?

Tashiev: We are now working on creating a coalition, together with all the other parties that made it into parliament. I think today or tomorrow we’ll ultimately resolve this. Within two weeks [of the official election results], we must create a coalition and form a government. My personal proposal is that all five parties must be in a single coalition and work together. This means we must all, together, create both the government and the parliament and pull the country out of this political and economic crisis.

EurasiaNet: What is Russia’s role in Kyrgyzstan’s current politics? Does it have particular interests? There have been indications that the Kremlin has been trying to exert some influence, for example by publicly supporting certain party leaders.

Tashiev: My great hope and goal is that no other country interferes with our domestic politics. All domestic political processes must be settled by the leaders of those political parties that won the elections. No matter which leaders of other countries have met with Kyrgyzstan’s political leaders, any and all processes inside our country must be resolved within the framework of our legislation. The people [of Kyrgyzstan] elected those parties whom they trust. That means the leaders of these parties must determine the future fate and policies of our country. […] Before the elections, on principle, I did not meet with the leadership of the Russian Federation.

EurasiaNet:  Before the elections, you said you opposed a parliamentary system. Why was that and would you like to call for another referendum?

Tashiev: This issue was discussed in great detail during the election campaign. Many of our voters asked about this. We, as deputies elected by the voters, are obligated to express the opinion of the voters. They want this issue to be resolved by the people – because there have been so many times that constitutional reforms have been introduced all to please a few leaders or bureaucrats. No one asked the people. Things were just forced on the people, who were told, “Go on, you’re going to vote for this constitution. Period.” Nobody asked them what form [of government] they would choose. So I think we’ll discuss this issue, together with our fellow deputies, and most likely will present it for a referendum.

EurasiaNet: Don’t you feel that people were just recently asked for their opinion and they voted resoundingly to support a parliamentary system?

Tashiev: In June, the people were not asked. It was forced on the people. They were told, “Either you vote for this or no.” They [the interim government] presented three questions in one package: choosing the president; disbanding the Constitutional Court; and passing the constitution. So, mildly speaking, things shouldn’t be pushed through by force. The people must make their own choices.

EurasiaNet: It appears many Uzbeks voted for your party, so what will you now do for them as winter descends on southern Kyrgyzstan and many remain homeless?

Tashiev: We have concrete plans for helping those who suffered [from June’s violence]. The most important thing right now is not to delay the formation of a government, so that decisions can be made quickly, especially since winter is around the corner. So, decisions must be made about preparing the country for winter and about providing aid to those who suffered. There’s a lot of work to do and that’s why we shouldn’t waste valuable time on any sort of political intrigue.

EurasiaNet: You have said the American base at Manas “should not be” in Kyrgyzstan. Will you seek to close it?

Tashiev: The thing is, it’s not us trying to do this. We must view this in the context of mutual worldwide security. It’s not just about the security of our country or Afghanistan or some other. No. This includes the security of other countries. So, naturally, we’ll have to discuss this issue with the authorities of those countries that have a base here, including America. But to categorically say that it should be closed and they should be kicked out – no, I don’t hold such an opinion. [Editor: Russia also maintains a base in Kyrgyzstan; Tashiev has said that base should remain open.]

EurasiaNet: You have said Kyrgyz should be “the first” ethnicity in Kyrgyzstan and if any group says they are “on a par” with the Kyrgyz, the nation could fall apart. Can you explain how?

Tashiev: What happened in our country in June was a direct consequence of the failure to abide by law and order. The so-called interim authorities weren’t capable of ensuring people’s safety. As a result, this interethnic conflict occurred. I’ll say it once again: I have never been a nationalist. I have never belittled the virtues of other ethnicities. This is all underhanded scheming by our opponents who wanted to diminish our standing during the electoral process. Nonetheless, the Uzbek part of the population voted for me. Why? Simply because they know that I’ve always helped them, that I will stand by them, that I never considered Uzbeks to be beneath Kyrgyz. I believe that in our country all ethnic groups must be equal before the law. Those who are educated, those who are viewed as an authority by the people, those who can lead this country out of this crisis – they are the ones who will be working in the government and other leadership positions.

EurasiaNet: Could you explain what exact concerns you had about the nation falling apart?

Tashiev: I was concerned and am still concerned that domestic nationalist separatists who want to somehow divide our country into different ethnic groups could lead to the collapse of our country. That’s why we should be concerned about them.

EurasiaNet: Do you have any concrete groups in mind?

Tashiev: Yes, there are concrete groups, which have made statements on television and in the media, which took certain actions – for example, the one led by Kadyrjan Batyrov. [Editor: Batyrov was an Uzbek community leader in Jalal-Abad, but fled the country after the June violence.]

EurasiaNet:  Even though you are quite young, you have worn many hats: engineer, businessman, politician. Throughout it all, for nearly 15 years you have been the president of the National Boxing Federation of the Kyrgyz Republic. Tell us a little about this work.

Tashiev: My main goal was to pull young guys out of the provinces so that they could see the world, perform, show their skills. For example, in Suzak District [of Jalal-Abad Province], there’s a boxing club called Taimraz. The guys from this club have performed at world championships, at Asian championships. They won major prizes and many of them have become Masters of Sports. [Editor: a prestigious athletic rank left over from Soviet times] This is my joy.

I used to be very active both in boxing and in martial arts. Now I go to the gym very often – to get my anger out on the punching bags.