Kyrgyzstan: Rapper voices nation’s angst in the time of coronavirus

Sayasat is based on stories pulled straight from the headlines. 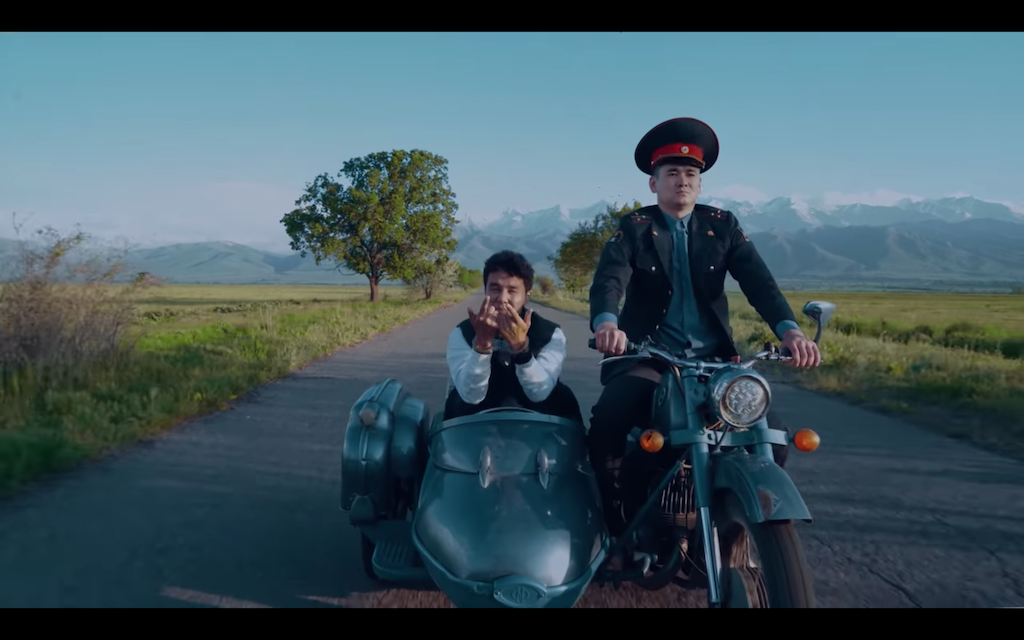 In Begish, Kyrgyzstan has found an urgent voice to articulate popular frustration at the government’s handling of the coronavirus crisis.

Sayasat (Politics), the song that the 28-year-old rapper, whose real name is Begaly Belekbayev, released last week, is a short and fierce burst of anger.

The accompanying video, all filmed in a single take, is its own denunciation.

The opening frame is of a long, straight, lonely country road seen against a stunning, crystalline mountain backdrop. After a few moments, a handcuffed Begish is dragged into the shot and bundled by a uniformed policeman into the sidecar of a waiting motorbike. As the impassive cop drives his vehicle toward the retreating camera and viewer, Begish delivers his invective in the staccato rhythms of automatic gunfire.

The themes are evergreens and yet entirely of this moment.

The arrest depicted in the video, Begish told Eurasianet, was a nod to the recent incidents in which people who have taken to social media to complain about the government have resurfaced online days later, under evident pressure from the police, pleading for forgiveness.

Begish sings about front-line workers struggling to cope with a medical emergency. Around one in every five known coronavirus cases in Kyrgyzstan are among medical workers.

“Doctors can barely make it/ Fighting an invisible disease / Doctors without masks/ Tired and sick / For sleeping at work / Their pay goes up 500 som.”

That line about 500 som (which is around $6.50) is a reference to the extra pay that health workers are being given under a government decree adopted in April.

“So much money has been allocated [for fighting COVID-19], but the main people fighting this illness are doctors. And you can count them on your fingers,” Begish told Eurasianet. “Our country is small, and we don’t have that many people. 500 som is just a joke. They are going around in disposable masks. I’ve seen on social media how members of parliament are handing out humanitarian aid in these sophisticated masks and top-quality gowns. Why don’t they give them to the doctors?”

Other verses pulled directly from the latest headlines are about last week’s fresh episode of violence among residents along the Tajik-Kyrgyz border: “They sell our own electricity / To our own people at higher rates / Whatever money comes this way / Goes straight into their pocket / And yet our borders are in turmoil / And our people are oppressed.”

Then there is the plight of migrant laborers stranded in places like Russia and Turkey by the global coronavirus lockdown: “People stuck overseas / And the homeland closed its doors / Where do they go? / Sleeping in train stations.”

The Foreign Ministry has estimated that nearly 9,000 Kyrgyz nationals have appealed to them for assistance in returning home. The government plans to bring back about 1,000 people, mostly from Moscow and Istanbul, this month.

The word altyndarym, which translates as “my dear little golden ones,” was particularly favored as a form of address to the population at large by former President Almazbek Atambayev, but subsequently began to be used ironically to satirize the way in which public officials tend to patronize the public. Begish disdains the word as infantilizing and hypocritical.

Begish said that he has been offered money for performing on the parliamentary election trail by candidates running for seats in a vote later this year, but that he has so far demurred.

“This year, if there are people I can trust, I may get involved, but only on condition that I am not campaigning for them. I might perform at their shows,” he said.

Sayasat came about in record time. Begish wrote the lyrics in half an hour and the musical arrangement was ready by the next day. The actor who plays the cop in the video is popular blogger Bolot Ibragimov, who writes about police abuses.

“I wanted people to know that I am worried about everything that is going on in our country, and to show them that I'm with them, that I cannot see what is happening and stay quiet,” Begish told Eurasianet. “That at least through me and my song they can have the voice of the people heard by high-ranking officials.”