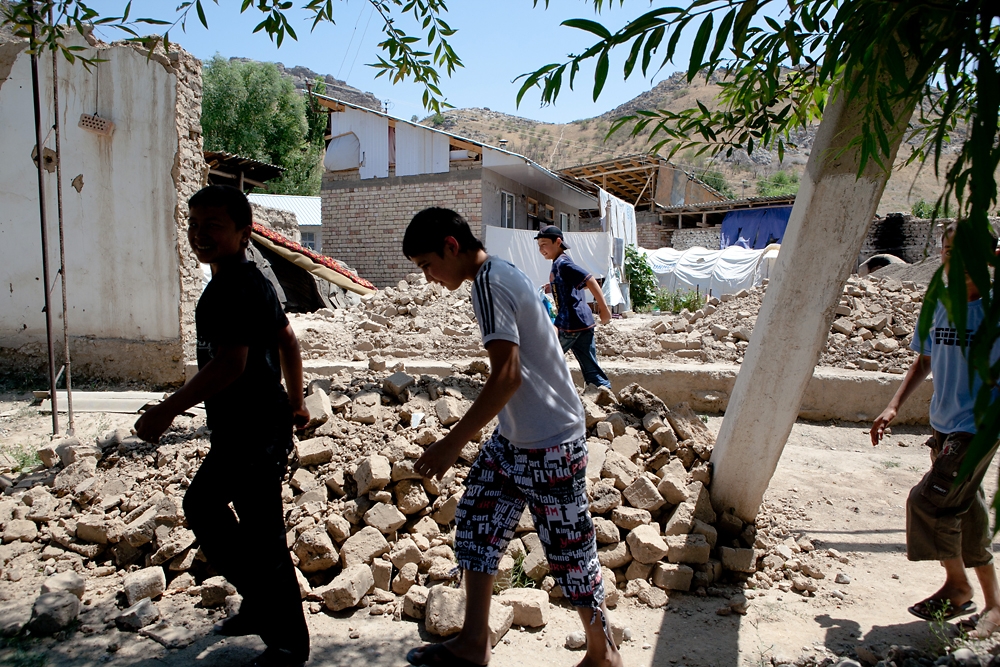 The city is making it difficult to rebuild homes in central Osh, where officials would like to see some Uzbek neighborhoods replaced with apartment blocks. (Photo: David Trilling)

There is a pile of neatly stacked bricks in the corner of Tokhtokhan’s yard, placed there by helpful neighborhood boys. Her home in central Osh, destroyed during last year’s ethnic violence between Kyrgyz and Uzbeks, is ready to be rebuilt. But work is at a standstill because her reconstruction hopes have run up against redevelopment plans being pushed by city officials.

Tokhtokhon, an ethnic Uzbek who is 70, shares her two-room, brick “transitional shelter” in the Cheremushki neighborhood with seven family members, all of them relying on her monthly $70 pension. After last summer’s clashes, the UN High Commissioner for Refugees (UNHCR) helped hundreds of families build such homes to get them through the winter. Now Kyrgyzstan’s State Directorate for Reconstruction and Development has secured $30 million from the Asian Development Bank (ADB) to expand each of these homes to 100 square meters. But while mahallahs -- ethnic Uzbek neighborhoods -- in suburbs like Furkhat and Sharq show clear signs of reconstruction progress, those in downtown areas stand in limbo: city officials plan to bulldoze them to make room for high-rise apartment buildings.

Cheremushki was one of the areas hardest hit during the June 2010 violence in southern Kyrgyzstan, with 283 homes destroyed. At the time, Tokhtokhon – who declined to give her last name for fear of reprisals – lived there with her son, his wife, and six grandchildren. A mob attacked their house and torched it with her son inside. “All I had left of him was bones,” she recalls. Despite the two-room dwelling she has now, she says she still feels vulnerable -- the cherry trees that once formed a fence around her compound burned to ash, the mud walls mere piles of dust along the street. She is eager for the 70-square-meter expansion promised by aid groups to be built.

Aid workers say the city -- whose mayor, Melisbek Myrzakmatov, is a staunch Kyrgyz nationalist -- is doing everything it can to stop reconstruction in downtown areas, many of which were inhabited mainly by ethnic Uzbeks. Myrzakmatov insists on implementing a “Master Plan,” originally designed in 1978, that would redevelop neighborhoods like Cheremushki. The stalemate means that several hundred families will likely be living in temporary shelters for another winter.

City officials say that the efforts of international organizations to build permanent housing in central areas violate the law. “We say, ‘Yes, let’s restore the homes,’ but only temporarily. When implementing the Master Plan, some houses will have to be destroyed. They will be destroyed according to the laws of the Kyrgyz Republic,” Osh’s First Deputy Mayor Taalaibek Sabirov told EurasiaNet.org. “There is available land outside in the hills. If they don’t like that, we will provide them with apartments in the multi-story housing that will be built.”

Proponents of the Master Plan say mainly Uzbek mahallahs will be replaced by ethnically mixed neighborhoods, a change that is meant to cool tensions and improve relations. That seems unlikely to work, though: the one apartment block already completed for families affected by last year’s violence is occupied “85 percent” by ethnic Kyrgyz, said Sabirov, even though the overwhelming majority of victims were ethnic Uzbeks.

“Uzbeks were pretty scared, so they put in their applications later than other ethnicities. And we must allocate the apartments according to what paperwork we have,” he explained.

The city wishes to move 250 families, mostly Uzbeks, out of the downtown area, said Gulgaki Mamasalieva of Interbilim, a nongovernmental organization monitoring the reconstruction process. The Osh government, she explained, fears that the ADB money -- which will have to be repaid “by our children” because half is a loan -- will be wasted on reconstruction since city authorities plan to tear down the houses anyway.

For many Cheremushki residents, matters are complicated by the lack of ownership documents. Some never had them, and others lost them in the arson attacks that accompanied the violence. “The state registrar office now is greatly unwilling to produce registration paperwork for those who would like to build,” Mamasalieva said.

International aid officials say the city is using these technicalities to delay reconstruction. “The delay is political. It is clear that as long as houses are not registered legally, people are extremely vulnerable with regards to property rights during future development,” said one senior Western aid official. “If there was political will, they could get these homes registered.”

Aid workers are looking to the ADB for that political will. “The mayor is using the Master Plan as an excuse to not do anything. ADB must push for assurance that what will be built will not be demolished,” the aid official said, speaking on condition of anonymity because of the sensitivity of the issue.

“We’ve been extremely disappointed with the lack of progress in Osh,” said an ADB spokesman in Bishkek, calling the mayor the source of the delays. But the central government has little writ in Osh. Last summer, Bishkek tried to fire Myrzakmatov. He brought his supporters into the streets and has been left in place ever since.

City authorities seem little interested in calming tensions. A number of public ceremonies have vaunted ethnic Kyrgyz identity and culture. International rights groups have documented widespread arbitrary arrests of Uzbeks, and young men in Cheremushki say they are afraid to leave the neighborhood. “At night, Kyrgyz come and yell, ‘Death to sarts,’” said Tokhtokhan’s neighbor, citing a derogatory term for Uzbeks. Like many of her neighbors, she refused to be photographed or named, saying she was too afraid.