A low turnout may dent the legitimacy of the exercise, however. 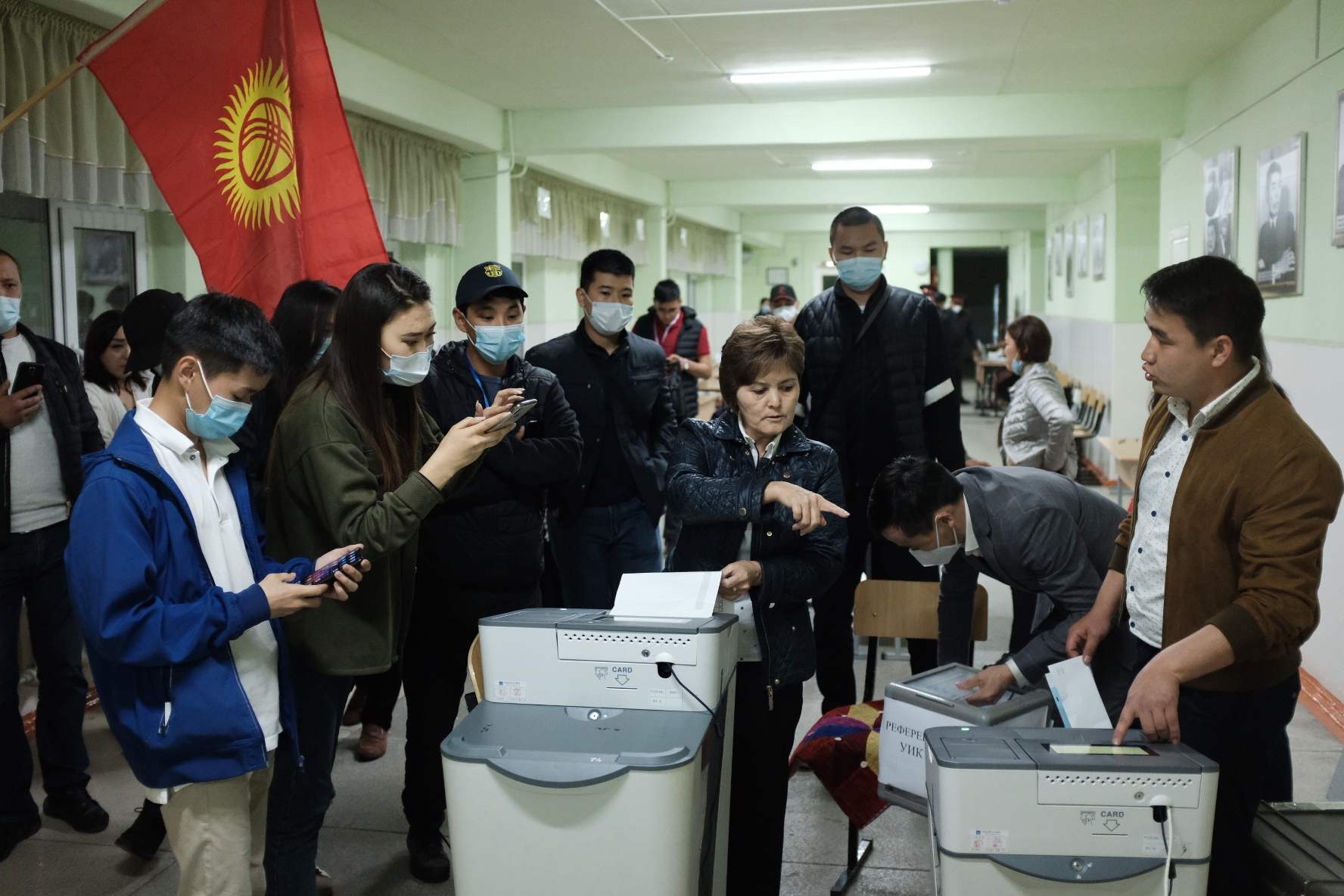 Voters in Kyrgyzstan have approved a new constitution that will give sweeping new powers to the president, ending a decade-long experiment with a mixed-system that never quite lived up to expectations.

Turnout for the April 11 referendum, which also saw voters across the country cast ballots for local government representatives, was low, however, which may in theory weaken the legitimacy of the exercise.

According to preliminary figures released late in the evening, 36.7 percent of eligible voters took part in the referendum, thereby surpassing the required 30 percent threshold. Out of that total, 79 percent voted in favor of the presidential constitution.

“This constitution was devised by us, together with community elders, scholars and legal experts,” President Sadyr Japarov said in remarks on the day of the vote. “Everything was discussed openly with the people. […] If the people support this, we will begin living tomorrow under the rules of the new constitution.”

Contrary to what Japarov has claimed, though, grassroots discussion of the constitution was relatively muted. As a result, even those who ostensibly supported it have struggled to articulate quite what ideas the revised basic law advanced.

All the same, Klara Erkinbayeva, a 65-year-old voter in Bishkek, told Eurasianet that she was optimistic about the prospects for presidential rule.

“I think it is the right way to go. Scholars, experts and historians all worked together to create the constitution,” Erkinbayeva said, echoing Japarov’s remarks. “I voted in favor. People have lost trust in the authorities. But we have great faith in Japarov. We believe in him.”

Erkinbayeva said she had not personally studied the constitution, but that she learned about it on television.

Critics of Japarov, who came to power in October in the wake of discredited parliamentary elections and on the wave of a largely aggression-fueled street movement, accuse him of ushering in a return to authoritarianism.

Under the new dispensation, the head of state is to become head of the executive and assume the authority to appoint almost all judges and heads of law enforcement agencies. Another section envisions the creation of something called the People’s Kurultai, a national-level analogue of a traditional if often erratic form of local power-brokering. Skeptics carp that this vehicle may become a smokescreen for lending a sheen of popular legitimacy to questionable policies.

Parliament, meanwhile, is set to shrink. In the next election, which is due to take place later this year, 90 members will be elected to the legislature, instead of 120.

In another change that stands to undermine the relevance of parliament, the president will be able to summon a referendum at his own initiative. That will circumvent the previous arrangement whereby only half the members of parliament or a public petition supported by 300,000 signatories could invoke such a plebiscite.

The constitution adopted in 2010 was intended to give lawmakers more responsibility in deciding the country’s fate. Even that document’s most ardent supporters would hesitate to argue that plan came to fruition, though. Legislators remained, by and large, malleable pawns doing the bidding of the president of the day.

One area of the new constitution that has many activists and journalists concerned is a vague provision envisioning restrictions on anything deemed to go against moral values and the “public consciousness of the people of the Kyrgyz Republic.” This has been read by advocacy groups as opening the path to arbitrary censorship and the repression of minority communities.

Still, the outcome of the referendum vote was largely considered a given. Local elections appear to be producing a little more intrigue.

Of the 25 parties in the running for the Bishkek city council, at least six appeared to have surpassed the 7 percent threshold, according to data published on the evening of the vote. The most dominant parties were Emgek (Labor), the National Democratic Party of Kyrgyzstan, or NDPK, Ata-Jurt Kyrgyzstan (Fatherland Kyrgyzstan) and Ak-Bata.

Emgek, which was leading the pack, includes in its ranks former MPs and representatives of several now-defunct or severely diminished parties once close to the ruling order. Party leader Zhanybek Abirov, for example, was an MP during the presidency of Almazbek Atambayev, who is now languishing in prison. He was also a close friend and business associate of Atambayev, who stepped down in 2017 at the end of his single permitted term.

In the southern city of Osh, meanwhile, Ata-Jurt Kyrgyzstan took a commanding lead, snatching up about 50 percent of the vote. This may be significant since this is the party most clearly aligned with President Japarov. The party is, in fact, essentially a rebrand of the Mekenchil party of which Japarov was a prominent member.

The general consensus is that the local elections may prove a rehearsal for the parliamentary elections scheduled for September.

Deputy Prime Minister Ulukbek Karmyshakov said at a post-election news briefing that election officials recorded “no gross violations.” Complaints, he said, centered on malfunctions with electronic ballot boxes. He also maintained that there had been no deployment of “administrative resources,” a term that describes the manipulation of electoral processes by state entities in the interests of pro-governmental forces.

News website Kloop, which organized a monitoring exercise involving 3,000 people, was less forgiving in its assessment. Its observers recorded 840 violations, most of which involved the technical issues that Karmyshakov appeared to be alluding to.

Elections expert Atyr Abdrakhmatova was caustic in her judgment on the day’s voting.

“The elections and referendum saw a level of violations similar to what we saw in last year’s parliamentary elections. Unfortunately, there was vote-buying and the use of administrative resources. This had the intended effect, and the results are obvious,” she told Eurasianet.