Kyrgyzstan: Referendum Sails Through with Push From Students 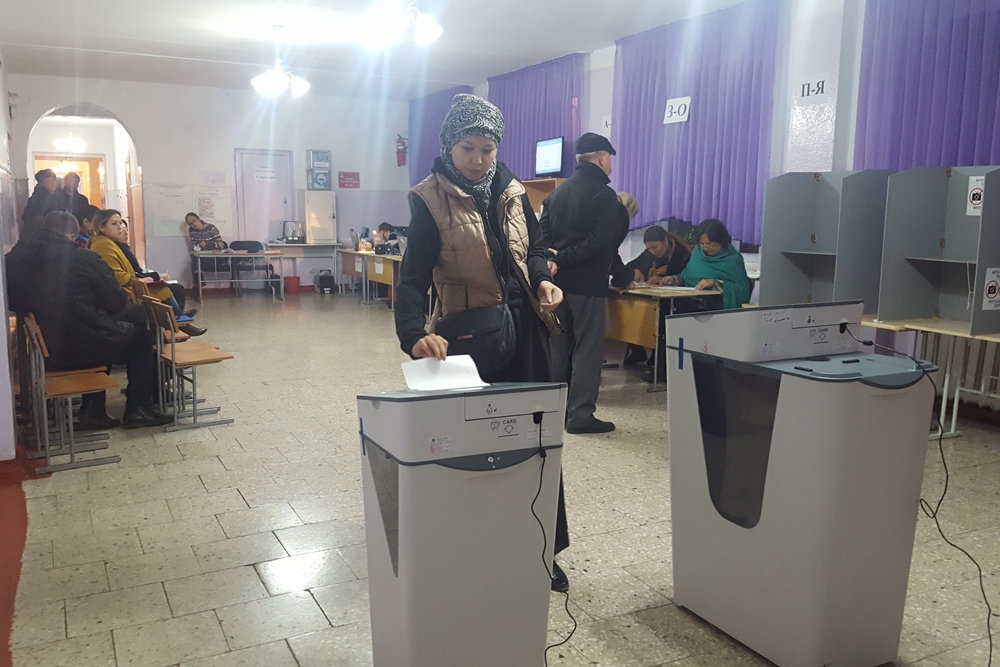 A woman votes in a referendum on December 12. Voters in Kyrgyzstan backed amendments to the constitution that will see the prime minister given greater powers, and introduce language defining marriage as being specifically between a man and a woman. (Photo: Anna Lelik)

Voters in Kyrgyzstan backed amendments to the constitution that will see the prime minister given greater powers, and introduce language defining marriage as being specifically between a man and a woman.

Critics contend that the constitutional reforms will make it easier for incumbent authorities to retain their hold on power, even though a term-limit requirement is preventing President Almazbek Atambayev from running for re-election this fall. Supporters say the constitutional changes will broaden support among rural and traditional communities for the constitutional process. Authorities, meanwhile, insist the amendments will boost the stability of the state.

Election officials said on December 12 that of the 42 percent of Kyrgyzstan’s 2.8 million voters who cast a ballot, 79.6 percent voted in favor of the constitutional reforms. While the 42 percent turnout figure is relatively low, by Central Asia standards, it is comfortably above the 30 percent threshold required for a referendum to be considered valid.

The head of the election commission, Nurzhan Shaildabekova, described the referendum, which took place alongside nationwide elections for city councils — in 22 cities and 389 villages across the country — a triumph for transparency and democracy. “We expended every effort to vote in an open and honest manner. We expended all our energy on ensuring there was no fraud,” Shaildabekova said on the day following the vote.

According to preliminary figures, almost one-third of voters were aged under 30 years old, raising suspicions that university students in particular were corralled into voting by their instructors in order to boost the numbers.

Rita Karasartova, a rights activist who took part in an election-monitoring drive, published photographs on her Facebook page of large groups of young people being directed toward a polling station at the Kyrgyz State Medicine Academy. Karasartova said observers noted that university staff members were seen in numerous polling stations directly monitoring students as they cast votes.

Many young people quizzed by reporters at polling stations were unable to explain what changes were being proposed to the constitution. While there were numerous proposed changes to the constitution, the question on the ballot was a simple “yes” or “no” and provided no additional information.

The general indifference to the specific nature of the constitutional reform was best illustrated ahead of the vote in a report by RFE/RL’s Kyrgyz service, which quizzed members of the public about the referendum. Most people questioned said that while they were voting, they were not clear about the 26 changes under consideration.

Technical issues also marred the referendum. Kyrgyzstan in 2015 introduced biometric voting to identify citizens by their fingerprints before they could receive their ballot. The initiative drew widespread skepticism from civil society activists, who worried that authorities would struggle to safely store private data. Last year’s parliamentary elections were roundly praised by international observers, however.

Things did not go quite as smoothly during the referendum. Newsrooms received multiple complaints of people saying they were unable to vote as the fingerprint readers were malfunctioning. The Taza Shailoo election-monitoring group said that voters were allowed 10 attempts to scan their fingerprints. If definitive identification could not be confirmed, would-be voters were turned away. In some instances, it took several hours for precinct election officials to fix equipment, meaning all but the most patient of voters bothered to wait around.

Voter lists were another much-reported problem. Many people had trouble finding themselves on the lists, despite having voted in the same precinct in previous elections. In some instances, voters discovered that unknown people were registered as living at their address. Some voters complained to the election commission that the system showed them as having voted already when they came to cast their ballot.

The scale of these issues is not yet clear, and it is not immediately evident whether an investigation will ensue. On Election Day, the head of the state registration service, Tayirbek Sarpashev, characterized many reports of technical faults as gossip intended to dampen the electorate’s confidence in the process.

Likewise, President Almazbek Atambayev was sanguine about the problems reported. “These are machines. It is unavoidable for them to have some glitches. What do you propose, that we return to the old system? The equipment is better. It may break, and we can wait for an hour or two, but we will vote honestly,” Atambayev told reporters.

The vote was overseen by monitors from friendly post-Soviet organizations, who provided their customary clean bill of health. The Organization for Security and Cooperation’s Office for Democratic Institutions and Human Rights did not monitor the referendum, citing lack of funds.

Concerning the municipal elections, the Social-Democratic Party (SDPK), which is indelibly associated with Atambayev, won a majority of votes in the biggest cities and villages, except for Cholpon-Ata in the Issyk-Kul region, where the locally focused Tabylga party had the edge.

Here too, what are referred to as “administrative resources” may have been at play, however. Ilyar Ilakhunov, a student at the Kyrgyz State Medical Academy, told EurasiaNet.org that his lecturers urged him to vote for SDPK, but that he refused, as he is an activist for a rival party.

The governing party’s dominance was particularly strong in the capital, Bishkek, where four of the five parties elected to the city council are broadly supportive of the nation’s current leadership. The fourth-biggest party was Mekenim Kyrgyzstan, which has been linked by some political observers to Atambayev’s former driver and close associate Ikramjan Ilmiyanov.

The only successful party in Bishkek not connected to the ruling party was the southern-based Onuguu-Progress, which came third after receiving tactical support from Ata-Meken party, which is also increasingly opposed to Atambayev.