Kyrgyzstan is trying to combat radicalism by teaching religious history in schools. Easier said than done. 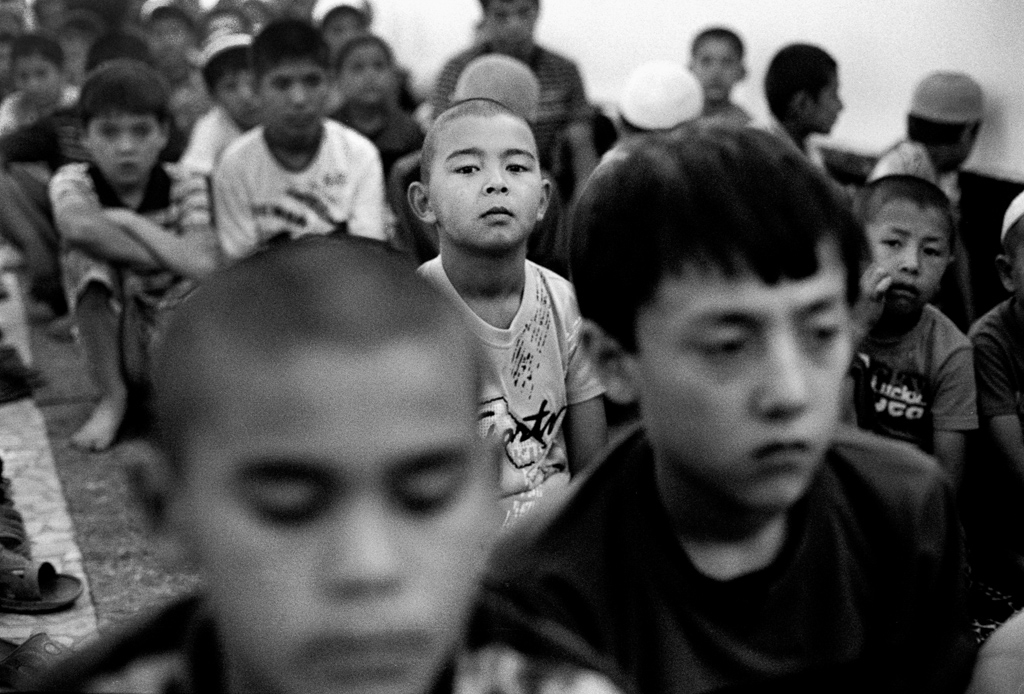 Boys at a mosque in Osh (David Trilling)

When ninth-grade schoolchildren in Kyrgyzstan began classes this year, they discovered a new subject in the curriculum: the History of the Development of Religions.

President Sadyr Japarov laid out the ambitious reasoning behind introducing the subject in a June decree.

“An understanding of the foundations of traditional religions plays an important role in forming, supporting and preserving national identity, as well as preventing extremism and intolerance,” the decree read.

The position of the Japarov government has been echoed by a broad spectrum of people within the analytical community and civil society. If young people better understand the role religions play in society, they argue, they will gain a surer grasp on the world around them.

The plan is to roll this course out to seventh and eighth graders starting with the next academic year.

Many experts warn, however, that the authorities may have to revise their approach to how this new subject is being taught if they are to avoid legal issues and a public backlash.

One objection is over the textbook, which critics complain feels more like religious propaganda than a secularly informed guide to the evolution of faith.

Only two brief chapters are devoted to major world religions and state religious policy in Kyrgyzstan. The rest covers the history and principles of Sunni Islam, mostly as interpreted through the lens of the jurisprudential Hanafi school and the avowedly rationalist Maturidi creed. This gloss on the faith, which began to be promoted by the state in the middle of the last decade, is often presented as having the most established roots in Kyrgyz society and boasting sufficient doctrinal flexibility to blend in with local beliefs and traditions.

Opponents of the new subject nevertheless complain that seeking to propagate religion through the state school system is in direct violation of the principle of secularism as enshrined in the constitution.

“The textbook is written from a religious perspective. It is basically religious propaganda, it pursues the interests of only one religious group,” Muratbek Imankulov, a historian and education expert, told Eurasianet.

The identity of the textbook’s authors tells its own story: Five of the people whose names appear on the cover are Islamic clerics.

There is also concern over the haste with which course content and teaching materials have been put together. Introducing new subjects into the curriculum typically requires lengthy piloting and revision procedures. Here, corners have been cut, say critics.

And as of mid-October, many schoolchildren have still not been provided the textbooks by the Education Ministry.

The history of this initiative began with what was known as the action plan for the State Policy in the Religious Sphere Concept 2014-2020. In 2014, a team of scholars and representatives of several state agencies began developing materials for a course to be known as the History of Religious Culture.

The subject was piloted at selected schools in the academic years 2016-17 and 2017-18. It was then amended three times following consultations with schoolteachers and feedback from religious organizations.

As described by a former head of the State Committee for Religious Affairs, Zayrbek Ergeshov, who oversaw the piloting and review of the subject, the main goal of the course was “to explain to children how religion had influenced the development of culture and science, and how it has influenced the progress and development of human civilization in general.”

Even though Japarov’s June decree alluded to that piloted course, the team that devised the History of the Development of Religions has largely set aside didactic materials that were developed over an eight-year period, including a textbook entitled History of Religious Culture. The content of the textbook may offer some clues as to why it was jettisoned. It devotes roughly similar attention to all major religions, not to speak of ancient beliefs like paganism and Zoroastrianism, the study of which is condemned by Islamic clerics.

One of the authors of that defunct textbook, religious studies expert Nazira Kurbanova, told Eurasianet that the pious Islamic community has been a particularly fierce opponent of the idea that children in Kyrgyzstan should study religions other than Islam.

Kurbanova attributes this stance to what she described as the rapid Islamization of Kyrgyzstan, wherein a proliferation of mosques and Islamic teaching establishments has been seen in recent years.

“All the people who have studied at these madrasas (religious schools) have been socialized according to the tenets of sharia [and that is how they want to live],” Kurbanova said.

It is also unclear that the school system even has enough suitable staff to teach this course. The government has so far enlisted 2,430 instructors – 2,210 history teachers and 220 theologians – to teach the subject. Following a vetting process conducted by the State Committee for National Security, the would-be instructors underwent three-day courses to prepare them for the job.

Imankulov, the religions and education expert, warned that while “history teachers may lack knowledge on religions, theologians may lack necessary teaching skills and experience.”

“A dangerous situation could develop if theologians favor one religion over others,” he said.

Since the vast bulk of theologians in Kyrgyzstan have been trained doctrinally at madrasas, it is improbable they will be able to stick to the principles of secularism as required by law, experts like Imankulov caution.

The Education Ministry has addressed this concern with the reassurance that if teachers impose their own views on children, “students and parents may contact school principals.”

“If no measures are taken, then you can contact the ministry,” it has said.

Champions of this educational initiative insist that the youth of Kyrgyzstan is in urgent need of ideological immunity against pernicious and nihilistic forms of Islamic belief.

One such person is religious studies expert Daniyar Muradilov, who alludes to the trend of increased religiosity among youth when warning that “religiosity without education leads to fanaticism and radicalism, which are fraught with consequences such as extremism and terrorism.”

Mametbek Myrzabayev, the head of the Islamic Studies Research Institute, which has conducted extensive research into radicalization among youths in Kyrgyzstan, is skeptical. He argues that the dry and encyclopedic tone of the material being made available to schoolchildren is not liable to do much to prevent radicalization.