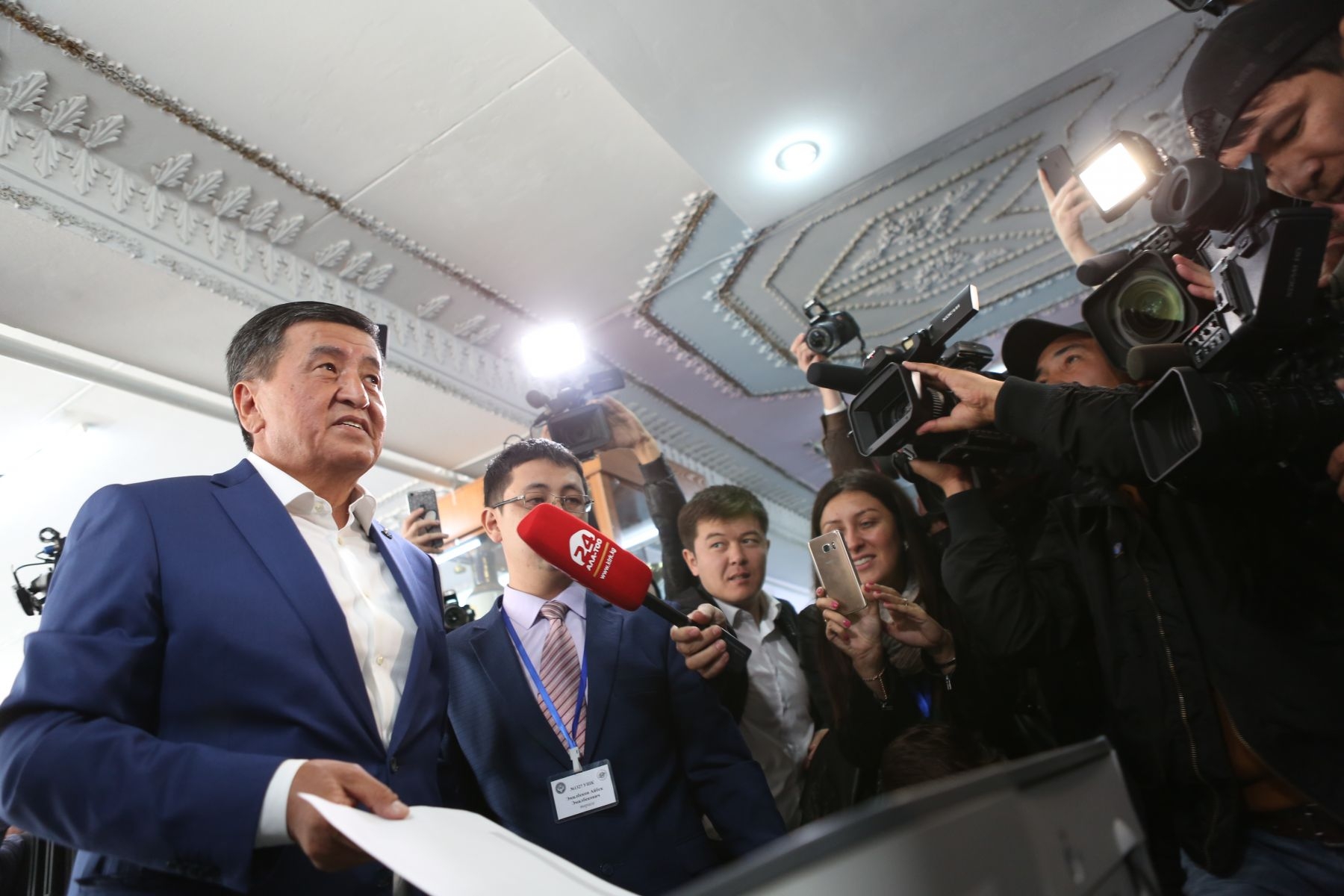 An in-depth investigation by news website Kloop.kg has revealed evidence of collusion in Kyrgyzstan between the government and the winner of this month’s presidential election. A Kloop.kg report states its research shows that Sooronbai Jeenbekov’s campaign gained direct access to government computer servers, almost certainly giving it access to vast pools of personal data about the nation’s voters.

When Jeenbekov, who was nominated to run by the ruling Social Democratic Party, unexpectedly won a majority of the vote in the October 15 election, his detractors were quick to suggest that he had benefited from the deployment of what are known as “administrative resources.” This usually describes a cocktail of methods that can range from unfair and disproportionate access to state media to placing pressure on civil servants and students to vote for a given candidate.

For administrative resources to have any certainty of success, however, campaign workers need to be able to access detailed information about voters. And that, Kloop.kg found in its investigation, is what exactly they appear to have obtained.

The story begins in mid-September, just as the election campaign was getting underway. Around that time, Samara.kg, an obscure website that previously advertised real estate services, was suddenly converted into a voter data management system. After plugging in log-in details, visitors to the website would find spreadsheets containing names, addresses, tax numbers and other information. But even more importantly, as Kloop.kg discovered with assistance from Qurium, a Swedish nonprofit specializing in IT security, the website was relocated to a server belonging to the State Registration Service — a government entity that collates and processes personal data on Kyrgyz citizens. The server is at the heart of ambitious e-government initiatives intended to do away with vast amounts of red tape.

“What we have shown is that government servers that process and handle the data of citizens of Kyrgyzstan … was hosting an election campaign website that was collating similar data,” Kloop.kg chief editor, Eldiyar Arykbaev, told EurasiaNet.org.

The existence of the voter management data system was being actively discussed on forums and social media in the weeks before the election. But the bulk of details divulged by Kloop.kg only came to light because of an anonymous self-styled activist going by the nickname suppermario12. On the eve of the election, suppermario12 hacked into Samara.kg, and then wrote a letter to multiple local news outlets informing them of the website and how it was operating on a government server. In a curious detail, Qurium’s research found that the Samara.kg domain had been registered by Uchunbek Tashbayev, who occupied a ministerial portfolio for about one year, in 2011.

The identity of the person behind suppermario12 is not known beyond doubt, but Arykbaev told EurasiaNet.org that much of the factual claims made by the hacker have subsequently been independently verified.

As suppermario12 told Kloop.kg, his intent was to derail the voter data system by locking out other users, which is why Samara.kg was unavailable on the eve of the election and on the day of polling itself. But the functions fulfilled by Samara.kg were simply taken up by another previously semi-dormant website, mls.kg, according to research done by Kloop.kg. Both websites have now reverted to their prior bland, anonymous functions — Samara.kg advertises carpet-cleaning services.

While hacking into Samara.kg, suppermario12 managed to download data relating to one precinct-level election commission — a list of 600 names, mainly of teachers and students at Bishkek’s Kyrgyz State Technical University, or KGTU in its Russian initials. A KGTU student contacted by Kloop.kg said he could not be certain how all his details ended up in the Samara.kg database, but that all the listed information was included in an official application form for would-be voters wishing to cast their ballot anywhere other than their permanent place of residence.

The chairman of the State Registration Service, Dastan Dogoyev, who has held his job since June, denied his department had any ties to Samara.kg.

“I can tell you with every authority — no third parties have had any physical or remote access to our servers,” Dogoyev told Kloop.kg.

Tashbayev, the formal owner of Samara.kg, denied all suggestions his website was somehow used for electoral purposes. He called suggestions his site had been relocated to a government server “sheer nonsense.” He said that the only use to which Samara.kg had been put was as a vehicle for a failed carpet-cleaning start-up.

The existence of a Samara.kg database would seem difficult to dispute. Kloop.kg managed during its investigation to speak to several Jeenbekov campaign workers who confirmed, speaking on condition of anonymity, that they used the voter register, adding that in essence, it differed little from the kinds of databases any election campaign teams use to try and effectively target their message. And footage surfaced online in the days before the election in which Jeenbekov campaign employees discussed the database.

In a commentary appended to its article, Kloop.kg stopped short of asserting that access to the voter database was, on its own, enough to assure Jeenbekov of an outright victory in the October 15 vote. What the website did argue, however, was that access to state servers packed with voter data would have “seriously simplified electioneering from any presidential candidate.” In addition, such access potentially compromised “private data of the citizens of Kyrgyzstan,” the Kloop.kg commentary added.

Qurium, meanwhile, said that allegation made by suppermario12 were serious enough that they should “trigger a deeper investigation.”

Other than to deny outside parties could have gained access to the State Registration Service, officials have yet to comment.