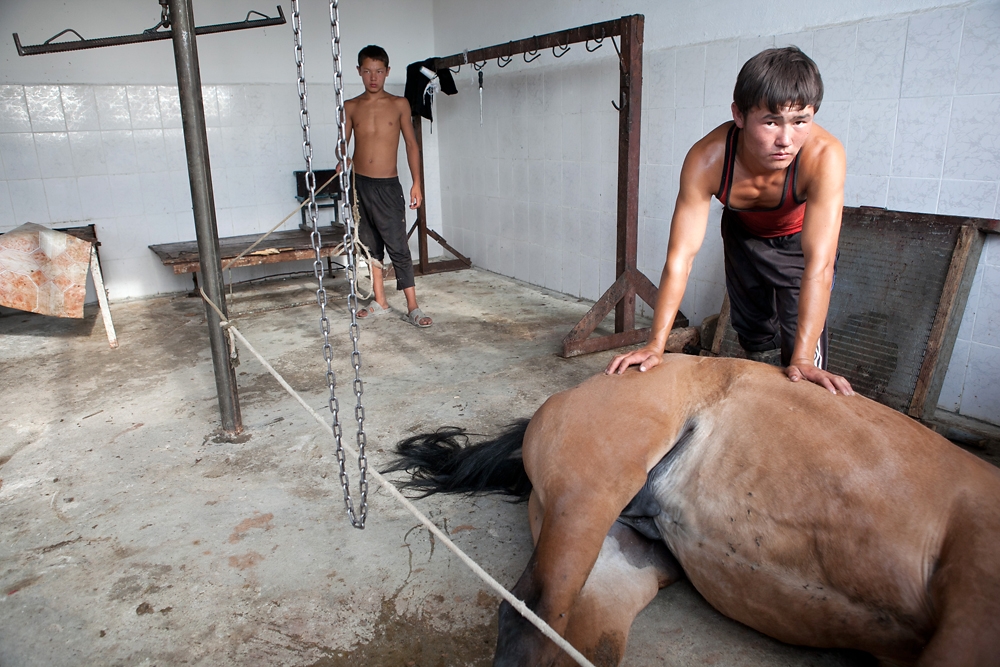 Horsemeat in Kyrgyzstan is not forbidden, but its consumption is sometimes frowned upon in other Muslim countries. (Photo: David Trilling)

Walk into one of the ubiquitous Bishkek butcher shops advertising itself as “halal” and ask what the word means, and you are likely to receive a shrug and a gesture pointing to a certificate on the wall. In Kyrgyzstan, where the observance of Islamic customs appears to be spreading quickly, there’s little agreement about how to prepare meat in a religiously proper way.

Traditionally, “halal” refers to “lawful” or “permissible” foods accepted by Islamic law, which forbids followers from eating pork and requires a specific method of slaughter. Many Muslim countries have a national halal standard agreed upon by authorities, clergy and producers of halal goods. Kyrgyz law allows individuals and entrepreneurs to issue their own halal certificates, and the Ministry of Economy’s Halal Division is supposed to ensure compliance with an approved standard.

In reality, the Halal Division has little authority, says Almaz Kaiyrbekov, the head of the department. Kaiyrbekov told EurasiaNet.org that his office supports Malaysian halal standards, which are “modern and trustworthy.” But when he will have the authority to enforce the standards, and what punitive measures violators will face, is “not exact, as all these things are still being developed.”

Further muddying the meaning of halal, Kyrgyzstan has two competing religious bodies with two different definitions – and they don’t get along. One is the Islamic Center for Religious, Scientific and Medical Studies, which is allied with the Ministry of Economy and thus uses the Malaysian standard; the other is the government-sanctioned Spiritual Administration of Muslims (the Muftiate), which backs something called the Eurasian Halal Standard. Muftiate supporters point out that the Eurasian standard makes special dispensations for horsemeat, which is widely consumed in Central Asia. Horsemeat is not strictly haram (“forbidden”), but its consumption is sometimes frowned upon in other Muslim countries.

In this murky situation, a wide array of food products are sold as “halal” – or sometimes marked ambiguously as “Muslim.” But a poor understanding of Islamic law means that even proscribed pork has reportedly ended up in some so-called halal products on sale in Bishkek. For this reason, believers like Karina Hadjimuratova often rely on word-of-mouth, rather than certification, for picking and choosing what she eats.

“I try hard to avoid breaking halal, but it’s the burden of producers to be honest with consumers,” says Hadjimuratova, a devout young woman in her early 20's. She is comforted by the forgiveness of Islamic law: “In Islam, if you eat something that you thought was halal, and it turns out somehow it was not halal, it’s not a sin.”

Some skeptics believe the two bodies keep the definition of halal purposely vague in an attempt to control the potentially lucrative certification process, and to collect licensing fees from producers who wish to stamp some sort of official-sounding name on their products. Those suspicions are fueled by near-constant corruption scandals at the Muftiate, where six Muftis have resigned in disgrace over the past four years.

Hadjimuratova is not convinced. “You can never be 100 percent sure what you are eating is halal,” she said. “Sometimes you just have to trust with your eyes closed.”