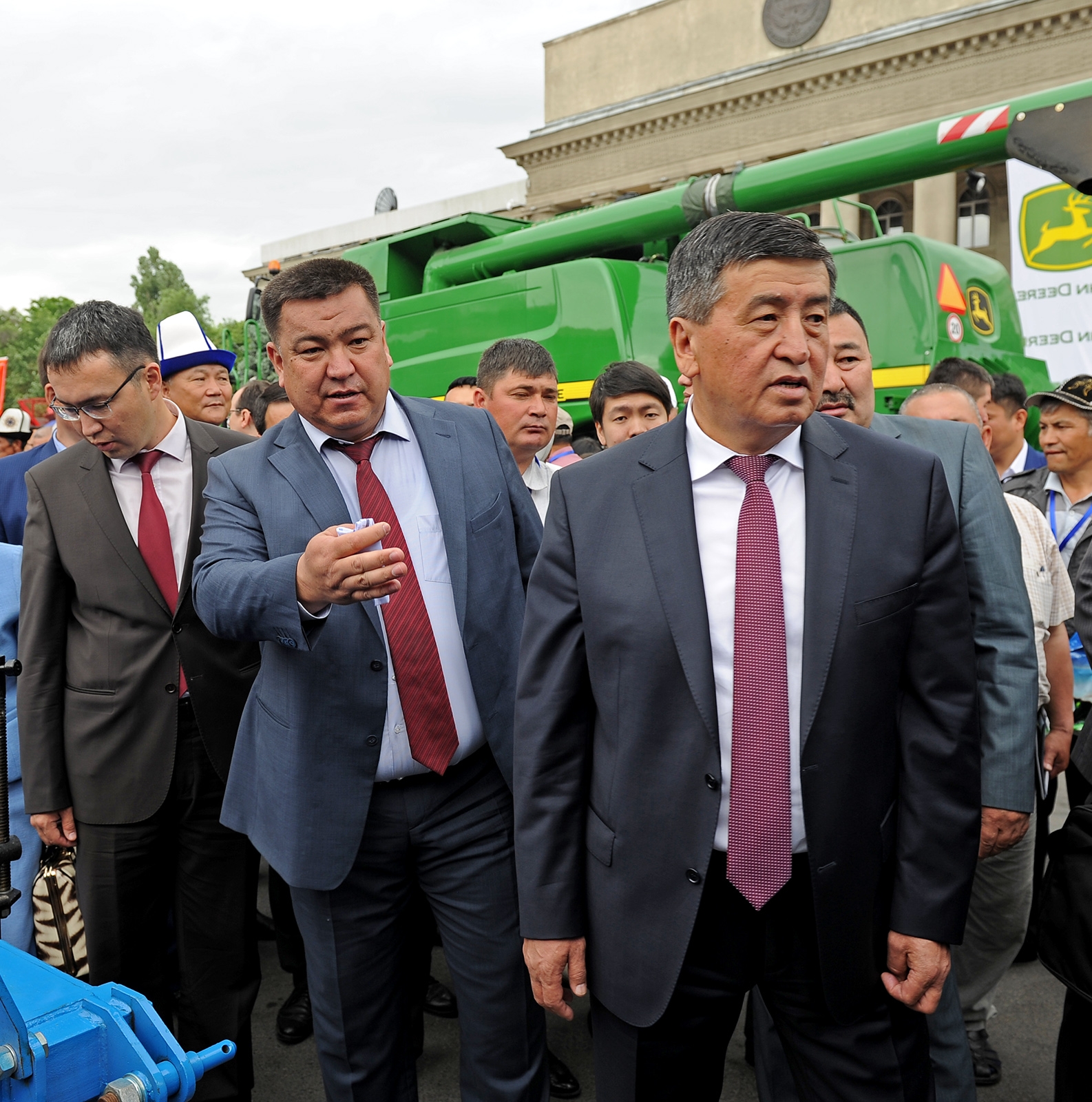 Kyrgyzstan's prime minister Sooronbai Jeenbekov, seen here on the right, as he attends an agricultural fair in Bishkek on May 17, 2017. (Photo: Kyrgyzstan Cabinet website)

Jeenbekov, an Atambayev loyalist from the southern region of Osh, was picked following a gathering of the parliamentary party on May 17.

Thanks to Atambayev’s evident backing he will immediately be viewed as a potential frontrunner for a ballot that seems likely to be pushed forward from November 19 to October 15 following a vote in parliament that took place the same day SDPK announced its decision on Jeenbekov.

With Jeenbekov’s candidacy confirmed, there will now be questions about when he resigns from his post given that the longer he controls levers of power in the state apparatus, the more he will be perceived to be at an advantage by his fellow competitors.

The fact that another potential race favourite, former premier Omurbek Babanov, hails from the north invites the possibility of a fierce competition between the geographic halves of the country, whose elites have traditionally jostled for power.

A native and former governor of Kyrgyzstan’s second most populous region, Osh, Jeenbekov is the antithesis of a charismatic politician and has been mocked on social media in the past for appearing to be on the verge of sleep in meetings.

But along with his brother, the former speaker Asylbek Jeenbekov, Sooronbai Jeenbekov’s political stock has risen steadily since the 2010 revolution that culminated the overthrow of ex-president Kurmanbek Bakiyev, under whom he served very briefly as agriculture minister in 2007.

Prior to becoming prime minister last year, he was a deputy head of Atambayev's presidential administration.

His nomination confirms the president's preference for hand-picking a successor and puts paid to a swirl of rumours that the the president's baby-faced chief of staff, Sapar Isakov, could emerge as such a figure.

Jeenbekov’s entry into the presidential race might also be seen as an attempt to nullify the chances of other southerners such as nationalist rabble-rousers Kamchibek Tashiyev, Adihan Madumarov and Akhmatbek Keldibekov, all former Bakiyev allies who had reportedly formed a cooperation pact ahead of the race.

Most importantly, however, it makes the vote more competitive and further increases the possibility of a second round of voting, which is why parliamentarians are now seeking to move the election forward a month.

If the November 19 date is kept, they have argued, a second round could see a future president take office after Atambayev’s single six-year-term expires in early December.

Of the 120 member parliament, 111 MPs voted for amendments to the electoral law to allow the vote to go ahead earlier than previously announced.

Other prominent politicians that have announced their candidacies include another former ex-prime minister, Temir Sariyev, Bakyt Torobayev, who heads the Onuguu-Progress party in parliament, and avowed Atambayev foe Omurbek Tekebayev, who is currently behind bars and awaiting trial in a contentious corruption case.

But polling conducted by the local SIAR Research and Consulting company suggests that Babanov, a skilled and hugle wealthy political operator who heads the Respublika party in parliament, enjoys substantially more trust and favor among voters than that trio. The same polling also suggests he is significantly more popular than Jeenbekov, making the SDPK nomination something of a risky bet.

What role Atambayev truly envisions for himself post-election is still unclear. While he had at one stage promised to seek contented retirement and take up the piano, he has more recently hinted he will remain in politics to lead the reorganisation of his party.

Given the dubious legacy he is leaving behind — from non-existent efforts to uproot corruption and stillborn reform to state institutions — Atambayev’s decision to respect his constitutionally permitted single term in office may well be remembered as his greatest achievement.