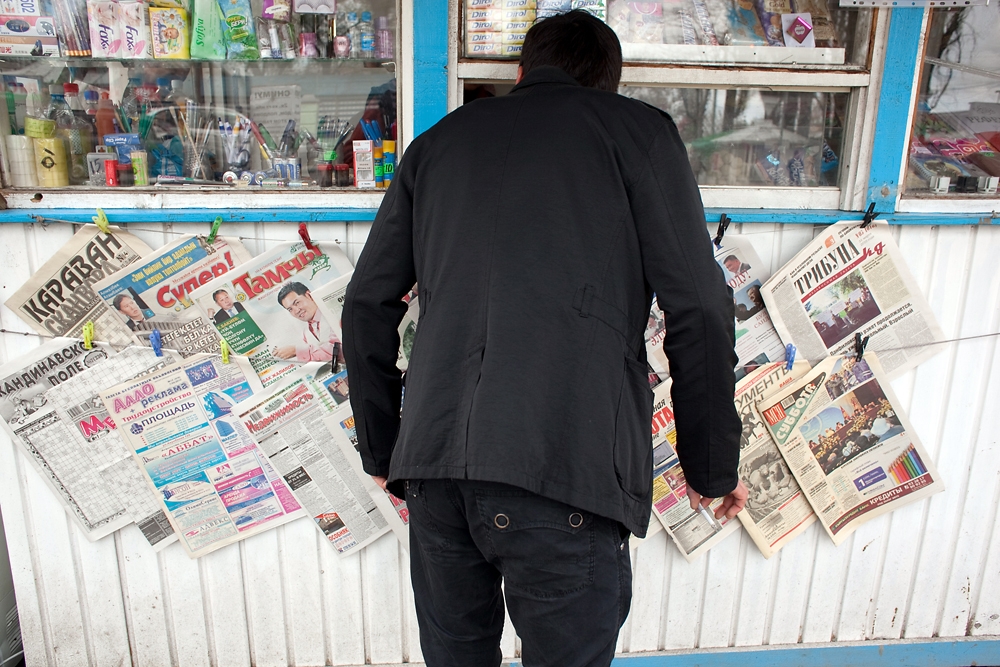 Relative to other Central Asian states, Kyrgyzstan has a fairly free and perennially noisy domestic media scene. Even so, Kyrgyz outlets tend to be no match for Russian state-controlled media when it comes to establishing narratives for current events.

A recently released and annually updated poll funded by USAID and carried out by the Gallup-endorsed SIAR consulting company indicates that the Ukraine crisis is enabling Russian media outlets to expand their reach in Kyrgyzstan, a country where 94 percent of respondents claimed to obtain news about politics from television. According to the latest poll, Kremlin-funded Russian Public Television (ORT) is the second most-watched channel in Kyrgyzstan. It also shows that ORT’s popularity is on the rise, with 20 percent of respondents selecting it as their “most frequent” source of political information and 16 percent as the “most trusted” outlet. Those figures are up from 13 percent and 10 percent respectively in the previous year’s poll.

ORT’s rise is coming at the expense of Kyrgyzstan’s national broadcaster, OTRK, which saw its popularity percentage fall to 34 percent this year from 38 percent in 2013. Likewise, OTRK’s perceived reliability slipped to 29 percent from 32 percent.

The polling data has important implications for Kyrgyzstan’s political future, as Russian media now seems better positioned than ever to influence Kyrgyz public opinion. ORT and other Russian-controlled outlets have an established history of trying to shape its coverage to suit the Kremlin’s interests. Most notably, ORT led a media campaign against former Kyrgyz president Kurmanbek Bakiyev in the run-up to his violent ouster four years ago.

In the coming weeks and months, analysts of the local press believe that a Russian “information war” will intensify as Kyrgyz officials dither on the issue of joining what is Russian leader Vladimir Putin’s pet project -- the Customs Union. Beyond the government’s hesitation about joining a Kremlin-led economic group -- which currently comprises Belarus, Kazakhstan and Russia, and which is expected to metamorphose into a Eurasian Economic Union as early as May -- public opinion in Kyrgyzstan about the country’s growing fealty to its northern neighbor is growing more skeptical. Polling data from the latest SIAR survey showed that the number of Kyrgyzstanis “categorically against” Bishkek joining the union has risen from 10 percent in 2013 to 21 percent this year.

Speaking to local media on April 11, Kyrgyz officials involved in accession negotiations said most of the Kyrgyz side’s key demands for concessions had not been met. The Customs Union -- along with the sale of the country’s gas network to Russian state energy giant Gazprom and the mooted sale of a majority stake in the country’s main airport to another Kremlin firm, Rosneft -- were all sources of discontent expressed at a recent 1,000-strong protest on April 10 in Bishkek, organized by the nominally anti-Russia National Opposition Movement.

Nargiza Ryskulova, a Bishkek-based journalist who writes for the BBC’s Kyrgyz service, suggests most Russian-speaking Kyrgyz tend to tune in to cash-strapped OTRK for national news and ORT for international news. “Now people are interested in Ukraine since Russia is interested in Ukraine. But many people lack an alternative to Russian coverage of world events. Internet penetration is only about a fifth of the population,” Ryskulova said.

Other observers are more worried. In a fiery April 8 op-ed for the Kyrgyz news outlet AkiPress, Edil Baisalov, who served as chief of staff to the former interim government, wrote: “I am willing to bet that the average Kyrgyzstani consumes more products of Russian propaganda annually than the average Tatar, Chechen or Yakut.”

The consequence of such viewing habits, he added, can be seen in the national parliament, where lawmakers are considering bills almost identical in substance to those discussed in the Russian state Duma, and among illiberal youth groups that parrot the Kremlin’s homophobic and anti-Western rhetoric at press conferences that receive disproportionate airtime. These trends showed some Kyrgyz have become “tired of independence,” Baisalov asserted.

In print media, traditionally pro-Russian publications have been mirroring ORT’s narrative concerning Ukrainian events (i.e. that Ukrainian fascists are trampling on the rights of Russian speakers) and other topics. The introduction to an article titled Russophobic Hysteria in the April 9 edition of the Russian language weekly Delo Nomer vented against Washington-funded Radio Free Europe, which earlier had alleged that the Kyrgyz periodical received funding from Moscow. The remainder of the article featured an interview with “political scientist and ex-diplomat” Bakyt Baketaev, who opined: “let’s speak openly - if there was a referendum on Kyrgyzstan entering the Russian Federation, many Kyrgyz would vote [yes], first and foremost those who remember the Soviet Union.”

Pro-Russian periodicals in Kyrgyzstan offer a heavy dose of anti-Americanism. Another article in same edition of Delo Nomer, for example, raised alarm about the supposed danger posed by “The United States’ Kyrgyz Front.” It linked a recent visit to Bishkek by the US State Department’s Assistant Secretary for South and Central Asian Affairs, Nisha Biswal, to the April 10 National Opposition Movement protest. US officials have denied financing such activity. Meanwhile, Dengi i Vlast, another newspaper that leans pro-Russian ran a story in its April 4 edition with a headline that read "Who is this bird Jomart Otorbayev?" The story featured a cartoon of Kyrgyzstan's new prime minister on a tank with an American flag. Otorbayev's "great mission" is "to block Kyrgyzstan's entry into the Customs Union," it alleged.

Funding sources for Kyrgyz media outlets are notoriously difficult to trace, prompting speculation that Russia is funneling money to local periodicals and broadcasters. It is “completely possible” that Kyrgyz media platforms receive money from Russian and other foreign sources, acknowledges Ilim Karypbekov, the chair of the public advisory board at the Kyrgyz broadcaster OTRK. But, he adds, the republic’s media woes go deeper than that. Kyrgyz media is generally unprofitable, he says, meaning that “any sharp political confrontations” are “a means to earn money in exchange for coverage of a certain kind.” What results is less an information war and more an “information vacuum” wherein outlets “attack politicians and each other, but don’t really highlight issues,” Karypbekov told Eurasianet.org.

Given its weak, fledgling democracy and strategic geopolitical location, Kyrgyzstan remains vulnerable to media manipulation, adds Karypbekov. “In our current situation we are located at the crossroads of a number of interests – internal and external -- political speculation is profitable and objectivity is expensive,” he said.