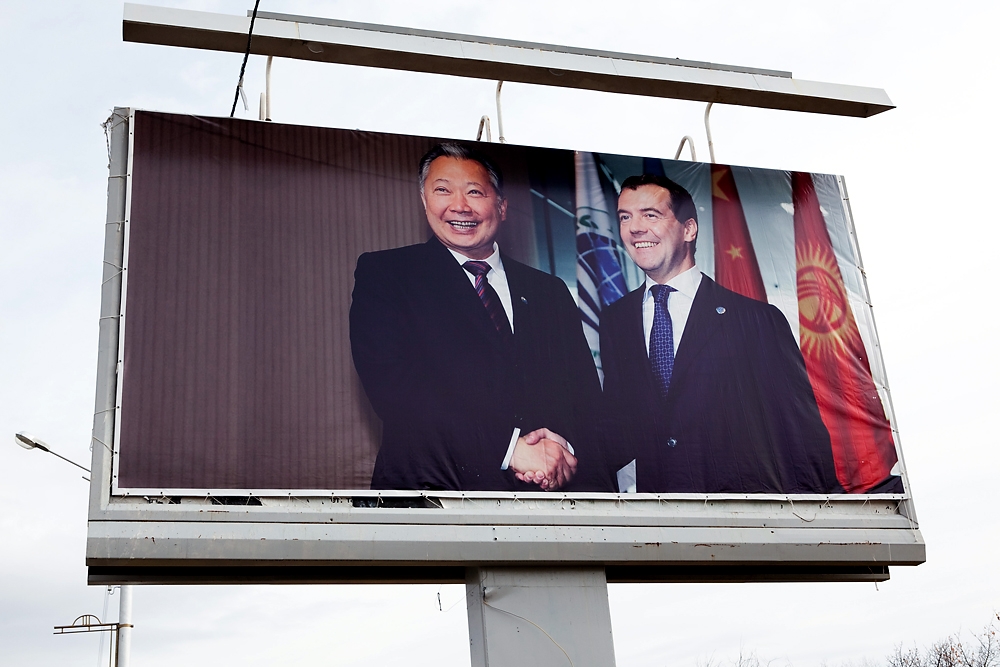 Kyrgyz President Kurmanbek Bakiyev has been taking a beating in the Russian press over the last week. The burst of media attacks suggests Moscow is losing patience with what one commentator characterized as Bakiyev's "small tricks."

Many in Kyrgyzstan obtain their news from Russian media outlets. Thus, the critical tone adopted by Russian commentators could spell trouble for the Kyrgyz government. The Bakiyev administration is already grappling with domestic discontent over a sharp increase in many essential goods and services. [For background see the Eurasia Insight archive].

The media bashing began even before a Bakiyev-backed national gathering, officially called the Kurultai Soglasiya (or Congress of Accord), ended in Bishkek. On March 24, the Vremya Novostei newspaper compared Bakiyev to Genghis Khan. The same day, the gazeta.ru website called him Kyrgyzbashi, an unflattering reference to deceased Turkmen dictator Saparmurat Niyazov, known as Turkmenbashi. On March 25, both the Izvestia and Kommersant dailies reported that Bakiyev is attempting to anoint his 32-year-old son, Maxim, as his successor. Izvestia dubbed the kurultai, "Operation Successor."

Russia's Regnum news agency expressed surprise at the bevy of negative reporting, but blamed Bakiyev for "dropping relations with Russia to their lowest level."

The source of Russia's displeasure can be traced back to early 2009, when the Kremlin offered a $2.15 billion aid package to Bishkek in what nearly every observer at the time believed was a quid-pro-quo arrangement in which Kyrgyzstan agreed to terminate the lease for a US air base at Manas, outside Bishkek. [For background see the Eurasia Insight archive].

Bakiyev at the last moment opted not to kick the Americans out of Manas, and instead negotiated a substantial increase in the US lease payment. [For background see the Eurasia Insight archive].On top of that, news surfaced in early March of this year that the United States planned to construct a training center in southern Kyrgyzstan. That announcement could make Russian plans to locate a Collective Security Treaty Organization base in southern Kyrgyzstan redundant. [For background see the Eurasia Insight archive].

Even before the Russian media attacks began on Bakiyev, Moscow was balking at handing over $1.7 billion in promised aid, which would be used to construct a hydroelectric dam in Kyrgyzstan. [For background see the Eurasia Insight archive].

The Russian press bashing may have started because Moscow is tiring of Kyrgyzstan's "drifting policy between the United States and Russia," said Dmitry Alyaev, editor of the Moscow-based Oasis Internet magazine. "Kyrgyzstan fully depends on Russia."

Bakiyev at first tried to downplay the hostile Russian media coverage, telling the kurultai plenum on March 24: "There are politicians in Russia who are trying to sow discord between Russia and Kyrgyzstan, despite the fact that there are very good relations between our countries."

But when the Russian sniping did not abate, Kyrgyz authorities sent signals that they do not feel intimidated. On March 29, the Kyrgyz Foreign Ministry formally complained to the Russian Embassy in Bishkek about the media attacks, local media outlets reported.

Kyrgyz officials also appear to have taken action to block unfavorable Russian reporting. For example, the local NTS television station, which rebroadcasts Russia's NTV news programming, replaced one critical report, which alleged that some Bakiyev political allies were engaging in corrupt practices, with advertising. The report was posted on local websites, but was quickly blocked on at least one.

Russian media outlets are not acting on its own, but following orders, said Marat Tokoev, head of a Bishkek-based non-governmental organization, called Journalists.

"Those TV channels that have shown the reports are state-owned and most likely it was done by an order from the top," Tokoev said, noting that a sharp plunge in relations was obvious when Prime Minister Daniar Usenov received a cold reception in Moscow in February. "We know that an informational war is always a prerequisite for political decisions."

"We have an information dependency on Russia and other foreign countries. We have a lot of their television channels and papers, and that's how people will judge this situation," Tokoev continued. He added that there is growing concern in Kyrgyzstan that Moscow could opt to retaliate by ordering Kyrgyz migrant laborers out of the Russian Federation. Such a move would deliver a devastating blow to the Kyrgyz economy, as many Kyrgyz families depend on remittances sent by family members working in Russia and elsewhere.

As bilateral relations began deteriorating late last year, several Russian political experts and journalists were involved in violent incidents. Alexander Knyazev -- director of the Bishkek branch of the CIS Institute and a prominent political analyst and author -- was beaten up December 9. A week later, Gennady Pavlyuk, an ethnic-Russian journalist from Kyrgyzstan, was murdered in Almaty

Knyazev cautioned that the Kyrgyz government's continued use of tough tactics on its critics, especially Russians, could invite massive retaliation. "If Russian journalists [continue to] be targeted, it will have bad consequences for Kyrgyzstan. If [Kyrgyz authorities] want a repeat of the August 2008 events in Georgia, it will happen, but only because of the fault of Kyrgyzstan," he said. Knyazev was making an ominous reference to the 2008 five-day war between Russia and Georgia.