No evidence was produced to back up the allegation. 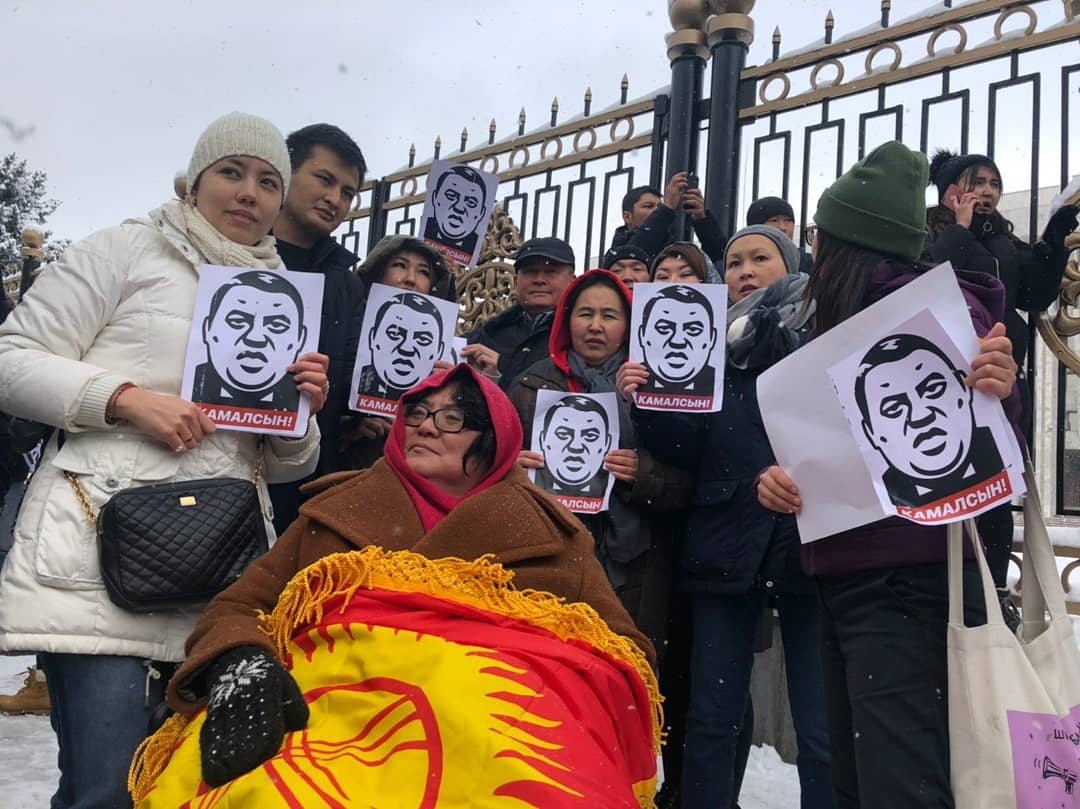 Protestors hold a rally against corruption in Bishkek in November 2019. (@umut2020kg)

The security services in Kyrgyzstan have tried to deflect claims of rampant corruption in the country’s customs service by alleging, without attempting to provide evidence, that reporters have taken kickbacks for conducting investigative work.

The accusation was leveled at RFE/RL’s Kyrgyz service, Radio Azattyk, by a chief investigator at the State Committee for National Security, Sagynbek Samidin uulu, during a parliamentary hearing on June 2 on the murder of Aierken Saimaiti, an ethnic Uyghur national of China who was shot dead in Istanbul last year.

Saimaiti was a key source in a series of media investigations, including one run by Radio Azattyk in May 2019 in which he contended that he was the conduit through which Kyrgyzstan’s influential Matraimov family had funneled hundreds of millions of dollars out of the country. After his death, he surfaced as the key source in a milestone media investigation, overseen by the Organized Crime and Corruption Reporting Project, or OCCRP, and compiled in cooperation with Azattyk and Bishkek-based news website Kloop, in which more detailed allegations were made.

Attention since the appearance of those reports has centered on Rayimbek Matraimov, a former senior customs official accused by his detractors of presiding over a web of corruption. Matraimov has denied these accusations. The wave of public indignation nonetheless prompted the authorities into pledging an investigation.

Samidin uulu’s remarks in parliament indicate that those investigations have been set aside and that the spotlight, and heat, will instead be turned onto those who did the original reporting.

The investigator said that Saimaiti had in 2017 fallen out with a wealthy business associate called Khabibula Abdukadyr, who Radio Azattyk and others have shown to have business ties with the Matraimov family, and that it was this fact that prompted Saimaiti to purported concoct a story implicating Abdukadyr in unlawful activities. Samidin uulu said that Saimaiti had paid Radio Azattyk journalists $100,000 to conduct their investigation. While claiming to have evidence, he made no attempt to produce it.

RFE/RL President Jamie Fly dismissed the allegations as “the latest attempt in a longstanding campaign of retaliation against journalists by corrupt individuals seeking to protect their wealth and power."

"We condemn such efforts to distort the truth, and once again call on Kyrgyz authorities to ensure that those responsible for threatening and attempting to intimidate the journalists related to this story are held accountable for their actions," he said.

Late last year, it emerged that Rayimbek Matraimov and his relatives had filed a suit seeking damages from media outlets, including Radio Azattyk and Kloop.kg, and also from Radio Azattyk reporter Ali Toktakunov individually. Toktakunov has since moved to Prague, where RFE/RL has its European headquarters, out of concern he could face further reprisals.

Disaffected former associates of the Matraimov family have also alleged to have been charged by them with tracking down Toktakunov and either kidnapping or killing him. The Matraimovs deride such accusations out of hand.