Babanov has reportedly been living in Moscow since losing the 2017 presidential election. 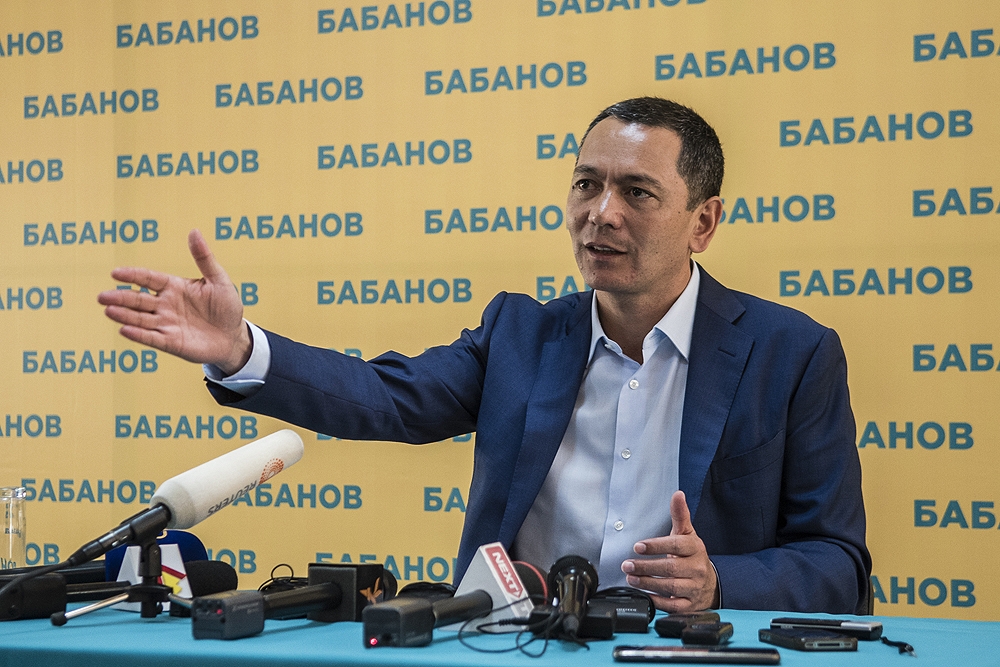 As Kyrgyzstan enters spring and a season of renewal, a figure from the past is staging his return.

Businessman Omurbek Babanov, who ran a costly but ultimately doomed presidential campaign in 2017, has intimated this week, through his political party, that he is planning to travel to Kyrgyzstan.

Babanov tantalized his Facebook followers on March 21 with this prospect while wishing them a happy Nowruz: “We will meet soon.”

The cryptic remarks were then followed up with confirmation from Maksat Sabirov, a member of parliament with the Respublika-Ata Jurt party, who reportedly said that he and several of his party colleagues had recently met with the businessman in Moscow.

According to Sabirov, Babanov may be returning to Kyrgyzstan within the month.

If that happens, he will have a welcoming delegation organized for him by the State Committee for National Security, or GKNB, the successor agency of the KGB.

“Measures will be adopted in conformity with the law,” GKNB chief Rakhat Sulaimanov is reported to have said.

This has to do with some criminal charges filed in the wake of the elections that Babanov lost in October 2017 in a hard-fought contest against incumbent President Sooronbai Jeenbekov.

Babanov waged a modern and energetic campaign against Jeenbekov but was ultimately unable to overcome the advantage accrued by the winner’s ability to draw on what are euphemistically termed “administrative resources.” Because Jeenbekov had been endorsed by outgoing President Almazbek Atambayev, he received tacit institutional support by various means.

News website Kloop also found that Jeenbekov’s campaign appeared to have gained an unfair advantage through its direct access to government computer servers, which likely enabled it to harvest vast amounts of personal data about the nation’s voters.

In any event, it was Babanov who was placed under investigation after the vote.

First, the GKNB announced it was investigating him on suspicion of inciting ethnic tensions during his campaign. Babanov strenuously denied the allegation and said some of his remarks on the stump had been taken out of context — review of the material certainly seemed to support his defense.

And then in March 2018, the security services followed up by opening a probe into claims that Babanov had plotted to seize power by fomenting unrest after failing to win the presidential contest. This claim too seemed remarkably weak, considering Babanov went out of his way after the election to urge supporters not to hold protest rallies.

Babanov may be banking for safety on some of the political developments that have occurred in Kyrgyzstan during his self-imposed absence, which began as soon as the first of those criminal investigations was announced.

It was under Atambayev that the GKNB began aggressively sniffing about for pretexts to put Babanov behind bars and neutralize him as a political opponent. But since relinquishing the presidency, which he was required to do by law after serving a single six-year term, Atambayev has fallen out with with Jeenbekov in dramatic fashion.

Multiple second-tier politicians jailed on dubious grounds during Atambayev’s time in charge have of late been released.

In February, for example, the Supreme Court ruled in favor of the release of Bektur Asanov and Kubanychbek Kadyrov, who were sentenced to four years in prison last summer on charges of plotting to overthrow the government. In the same month, the courts likewise ruled that there were no legitimate grounds for the 14-year jail sentence handed down in 2017 to Bekbolot Talgarbekov, a member of the soi-disant People’s Parliament, who also accused of scheming to seize power by force.

An even more relevant case for Babanov is that of Kanat Isayev, who was allowed to leave prison last July when the corruption charge under which he was sentenced was downgraded by Bishkek city court. Isayev had backed Babanov in the presidential election, attracting all kinds of negative attention, including, of course, a charge of plotting to seize power by force.

Jeenbekov is not, so far, exactly cutting the figure of the principled democrat, but his preference has been to avoid unnecessary confrontations. This could act in Babanov’s favor.

Then again, the increasingly friendless Atambayev is determined to cause mischief even from the political afterlife. In December, he told April television station in an interview in a singular display of chutzpah that he believed the criminal charges against Babanov should be dropped — as though he was not the person who allowed them to be initiated in the first place.

“After the elections, he could have incited unrest, but he did nothing of the sort and decided instead to quit politics. This truly shows that peace in this country is what matters most to him,” Atambayev said, quite shamelessly.

Atambayev’s belated offer of an olive branch is the last thing Babanov needs.