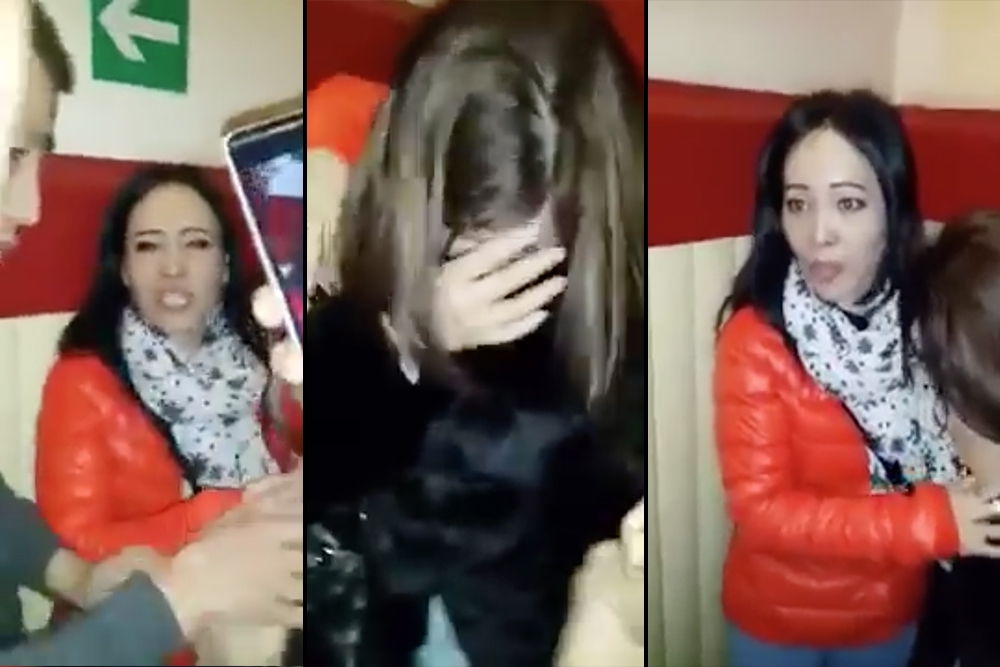 Several frames from a mobile phone video, published on YouTube on Feb. 16 and circulating among social media users in Kyrgyzstan, purportedly shows two Kyrgyz women being harassed and insulted by a group of male compatriots at a nightclub outside Moscow. (Video Frame Grabs)

A video now circulating on social media platforms in Kyrgyzstan is highlighting a persistent and problematic trend – the intimidation of Kyrgyz women by self-styled conservative patriots, both at home and abroad.

In the footage, reportedly filmed at a nightclub outside the Russian capital, Moscow, two Kyrgyz women are seen being shoved and insulted by a group of male compatriots indignant at them for consorting with non-Kyrgyz men. Desperate to avoid the grilling, one of the women attempts to shield her face. “Why are you so shy to show your face to the camera, and yet not shy to go to the restaurant with an Azerbaijani?” one person in the group of men can be heard saying.

One of the women explains that she was consistently disappointed by the behavior of Kyrgyz men, and that was why she had begun to date other nationalities. “My boyfriend was Kyrgyz. He started dating a Russian girl and now they live together in my apartment,” the woman says.

The video provides rare documentary confirmation of a widely reported trend, in which aggressive bullying behavior is justified by perpetrators as action intended to uphold traditional values.

A Kyrgyz Interior Ministry spokesman for the agency’s Moscow representative office told 24.kg news website that authorities were still trying to identify the individuals appearing in the video.

“First of all, we need to identify the women from the video, the place where the incident happened and the date [when the incident occurred]. After that, there is a chance we can find the creators of the video. It is too early to say what penalty the attackers could face,” the spokesman said.

Police say they need to receive a complaint from the women harassed in the video before they can proceed with an investigation. No progress has yet been reported. Social media users have been quicker off the mark, however, managing to locate the nightclub in question and demanding immediate action.

“Let’s get to them [the police]. We cannot tolerate this anymore,” wrote one Facebook user Jamilya Kirgizalieva. “The guys who did this can be identified through CCTV footage. Judging by the video, this is taking place at Soho nightclub in [the town of] Kolomna, in the Moscow region. Let’s track down these morons. The Interior Ministry has representatives in Moscow. They should quickly go and make sure the footage is not deleted.”

Remarks posted on Facebook by the head of the Kyrgyz Interior Ministry representative office in Moscow, Askat Aliev, raised questions about the willingness of Kyrgyz authorities to pursue the case. While condemning the actions of self-styled patriots, he added that he also deplored the “modern lifestyle of Kyrgyz women.”

“Over the last 10 years, because of migration and many other factors, young Kyrgyz women are not getting a decent education, are not graduating from high schools and universities, so these young women are not learning about all the good and bad things in life,” Aliev said. “So when they come to Russia in search of work, they cannot resist all the challenges they encounter, and they become the playthings of Kyrgyz, Tajik, Uzbek and Caucasian men, who take advantage them.”

This is no isolated case.

Attacks by self-styled, nationalist-motivated vigilantes on Kyrgyz women dating non-ethnic Kyrgyz are commonplace, in both Kyrgyzstan and Russia, where hundreds of thousands of Kyrgyz have moved in search of work. Those engaging in bullying behavior rarely face justice.

The relatively low incomes earned by Kyrgyz migrant laborers in Russia and the often bigger salaries of international workers inside Kyrgyzstan is a sore point. It is commonly perceived that foreign men wave their money at desperate Kyrgyz women only to then take advantage of them.

In December 2014, a group called Kyrk Choro (Forty Knights) mounted a raid on a karaoke bar, claiming that the young Kyrgyz waitresses working there were providing sexual services to the mainly Chinese clientele.

Speaking to EurasiaNet.org, Kyrk Choro member Baktybek Nuraly uulu argued that bullying Kyrgyz women was ultimately aimed at protecting them. “I am against the idea of our young women dating other men, especially in Russia,” Nuraly uulu told EurasiaNet.org. “Very often in Russia, their rights are being abused, and when they contact the Kyrgyz Embassy there, they don’t get any help.”

Nuraly uulu admitted that his fellow self-styled patriots should avoid using violence against women, but said it was important to see the deeper social problems at play. “In one way, I understand these guys. They work in Russia too, their rights are being violated and they themselves are being humiliated. So they vent their rage on our girls, who date the men of other ethnicities,” he said.

Bubusara Ryskulova – the head of the Sezim center in Bishkek, a facility for women subjected to domestic abuse – said that the violence registered in these cases of harassment stems from the patriarchal values that continue to dominate Kyrgyz family life. “The age of attackers is usually between 20 and 30. During perestroika [the late Soviet period], they were kids or teens, when they were witnesses to chaos and a lack of moral principles or culture,” Ryskulova told EurasiaNet.org.

The broader problem of violence against women causes much anxiety among local and international advocacy groups. Human Rights Watch in October urged the government to take more action to address violence against women, and expressed concerns over the slow or non-existent reactions of the police to reports of abuse.

In 2015, three similar cases only received media attention as a result of footage of the incidents being posted online. The real numbers of such attacks is unknown, especially since police are typically reluctant to pursue investigations.

One video showing a woman being undressed, beaten and insulted by a group of men for “sleeping with Uzbeks” was sent to local media outlet by an Internet user, who demanded that police take action. In July, police managed to identify the woman, but the probe appears to have ended with that.

A month later, another video appeared showing a group of men beating a woman and an ethnic Uzbek man. Law-enforcement authorities never reported about any success in finding attackers.

The most egregious case involved the rape in September in Moscow of a 20-year old Kyrgyz woman by a fellow national, who identified himself as the member of a patriotic group. The attacker filmed the rape and then used the footage to blackmail his victim. On this occasion, the woman quickly contacted the police, leading to the arrest of the attacker.