Kyrgyzstan sends troops to Kazakhstan, but not everybody is happy

150 troops from the elite Scorpion unit have already been deployed. 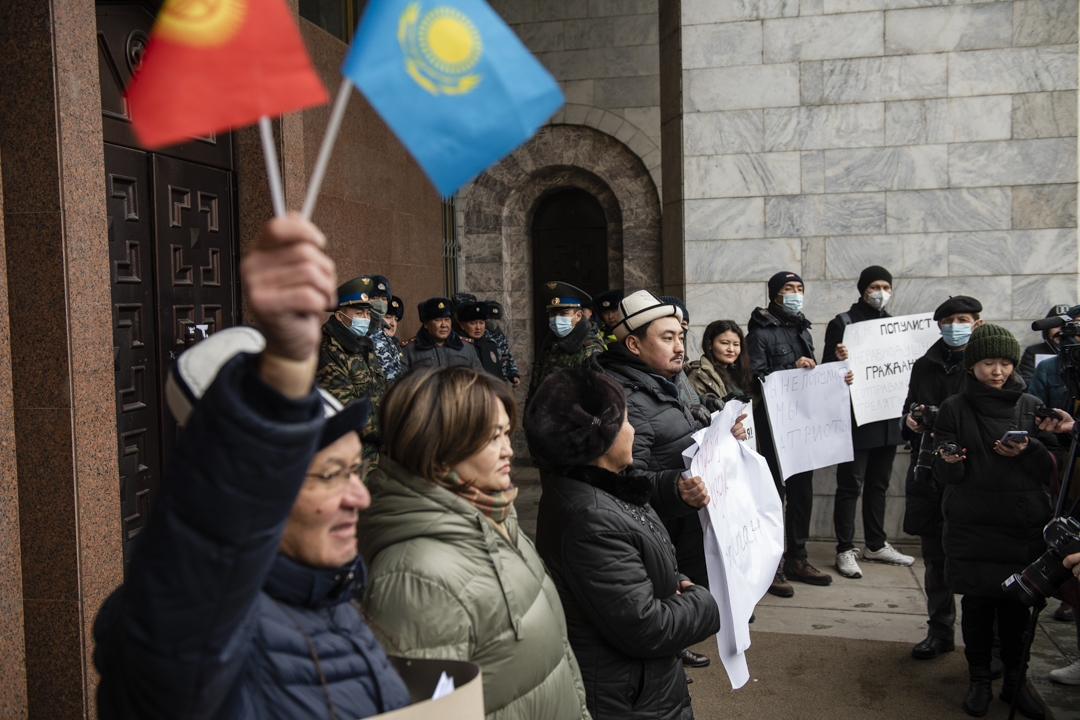 Protesters outside the parliament in Bishkek. (Photo: Danil Usmanov)

Lawmakers in Kyrgyzstan have voted to approve the deployment of 150 troops in Kazakhstan as part of a Collective Security Treaty Organization, or CSTO, peacekeeping operation intended to restore calm to the country.

The vote on January 7 was backed by almost all the MPs present, although many activists have opposed the idea.

Kamchybek Tashiyev, the head of the State Committee for National Security, told deputies that the mission of Kyrgyz troops had only peaceful purposes, but he acknowledged that there were risks that could not be anticipated.

“They had internal aggression and [Kazakhstan’s President] Kassym-Jomart Tokayev appealed to us,” Tashiyev said. “Of course, a state can always refuse, it has every right to do so, but we are parties to a collective security agreement and these agreements have been ratified.”

At Tashiyev’s request, the parliamentary hearing on the deployment was held behind closed doors. Dastan Bekeshev, an independent member in the legislature, said on his Twitter account that 69 of the deputies present voted in favor of the deployment, while another seven voted against.

Planes carrying the troops were reportedly on the runway at the CSTO air base in Kant, a town around 25 kilometers east of the capital, Bishkek, awaiting a presidential confirmation of the parliament’s vote. Russia’s Defense Ministry later announced that two of its Ilyushin-76 heavy transport planes carrying Kyrgyz troops and military equipment had taken off and were headed to Kazakhstan.

Opposition to this move has been full-throated inside and outside parliament.

Lawmaker Zhanybek Kydykbayev said deploying troops stood to discredit Kyrgyzstan in the eyes of the Kazakh people since it signaled the government’s support for Kazakhstan’s Tokayev.

“Under CSTO rules, we can send humanitarian aid instead of military support. What if we send the army and it runs into provocations? What if something happens to our armed forces? Who will take responsibility for that?” Kydykbayev said. “We should avoid getting involved in Kazakhstan’s internal conflict. And Tokayev’s appeal to the CSTO is, in my opinion, just his attempt to hold onto power.”

Bekeshev took issue with Tokayev referring to the people that the Kazakh armed forces are now stifling as “terrorists.” The same term could be applied to supporters of Tashiyev and Kyrgyz President Sadyr Japarov, both of whom came to power in late 2020 on the back of street unrest, Bekeshev said.

Bekeshev further question the utility of Kyrgyz troops in Kazakhstan, whose armed forces comprise around 100,000 troops.

“Our neighbors could probably cope with this internal political problem on their own,” he said.

Defense Minister Baktybek Bekbolotov said the Kyrgyz contingent will be drawn from the ranks of the Scorpion Spetsnaz elite unit.

“Not all of Scorpion, just part of it. About 150 troops. There won’t be any soldiers, just officers, warrant officers. There will be no young soldiers among them,” he said.

While the vote was proceeding, dozens of protesters with banners stood outside. Their signs carried slogans like “Kyrgyz and Kazakhs are family,” and “CSTO is Russia, hands off Kazakhstan.”

One protester, Ernis Isayev, a lawyer from Bishkek, told Eurasianet that he believed Tashiyev put pressure on parliament to hold the vote behind closed doors as a way of ensuring he got the right outcome.

“Our constitution states that the armed forces of Kyrgyzstan should not participate in any conflicts outside the country,” Isayev said. “This is just the fulfillment of the imperial ambitions of the Kremlin, which have foolishly been supported by our leadership.”

Political analyst Edil Osmonbetov told Eurasianet that he saw the entire peacekeeping mission as an attempt to improve the CSTO’s reputation, which has suffered over the years from charges of inaction.

This marks the first time since its inception three decades ago that the CSTO has agreed to deploy military forces to support an ally. It has refused requests on at least two other occasions: from Kyrgyzstan, during massive ethnic unrest in 2010; and from Armenia in 2021, as Azerbaijan pushed its post-war advantage by carrying out military incursions into Armenian territory.

“When parliament discusses options, it assumes legal and political responsibility by voting for or against,” Osmonbetov said. “Russia stands to earn the most geopolitical benefit from what is happening in Kazakhstan. This will have a major impact on the post-Soviet countries in the future and it will undoubtedly affect Central Asia.”