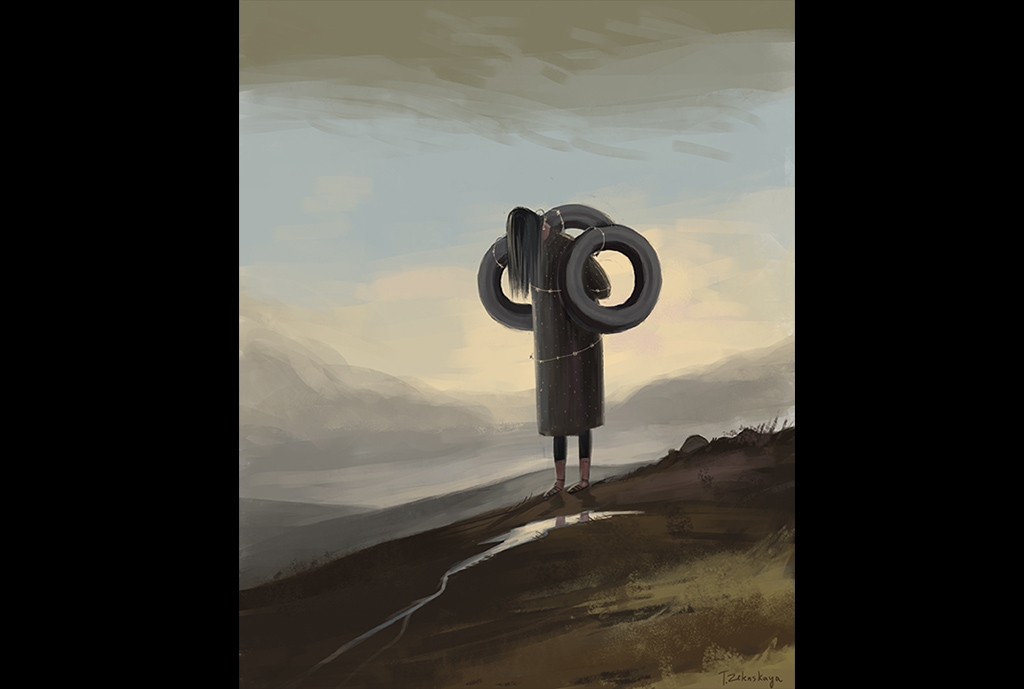 The chilling incident as reimagined by Bishkek artist Tatyana Zelenskaya.

“She’ll remember this afterward. She needs this. Keep filming,” says the man, urging his younger sister to keep the camera trained on him.

The scene that then unfolds has scandalized many, even in Kyrgyzstan, where grisly tales of domestic violence emerge with unerring regularity.

The man, who is aged around 50, repeatedly barks orders at a woman, his wife, to turn and face him so that he may slap her. Car tires filled with bricks are tied around her neck. Again and again, the man disappears off-screen to collect buckets of cold water that he empties over her head.

The woman filming the scene, which played out in the southern Jalal-Abad province, begs the man to stop, but he ignores her.

The wife’s offense, in her husband’s eyes, was that of going to visit her own sister without asking for permission. By recording the punishment, the man intended that the sister would learn the consequences of her and his wife defying his wishes.

The video has been widely shared on social media and messaging apps, generating considerable indignation in the process. Constrained by coronavirus-linked restrictions on assembly, activists invoked an online get-together on June 14. A rally was also held by women’s rights activists outside parliament on June 15.

The man in the video was already detained, on June 13, and has been sentenced to serve 15 days in jail.

But one-off punishments, such as they are, do not seem up to the job of ending a resilient scourge. Deputy Prime Minister Aida Ismailova said in remarks after the footage surfaced that in households where domestic violence has occurred, there are repeat incidents in at least 70 percent of the cases. The number of recorded domestic violence incidents keeps growing. In the first three months of this year, they were up by 65 percent compared to the same period in 2019.

Just acknowledging the problem does not go far enough, however.

Natalya Nikitenko, a lawmaker, proposed opening state-funded crisis centers for victims of domestic violence. All such existing facilities are run by nongovernmental groups and are funded through grants and donations.

“This high-profile case has illustrated a problem that has been ripening for a long time and that has matured with the connivance of the authorities, law enforcement agencies and prosecutors,” Nikitenko said.

Lawmakers are doing their bit to make life harder for the few organizations that are now helping, however. Parliament on June 15 approved the second reading of legislation that will require NGOs to engage in more exhaustive reporting on their finances than is currently required, draining the often-small organizations of their already depleted human and financial resources.

Public shows of solidarity are also not tolerated. The June 15 rally, which was organized by a local feminist group and attended by about 10 people in full respect of social distancing requirements, was quickly broken up by a group of more than a dozen policemen.

“We made our posters in advance and gave only one day notice of our one-person pickets, because we were afraid to do it before in case of provocateurs or an attack. The police said we were spoiled and badly brought-up and accused us of failing to maintain a proper distance,” one organizer, Aizhamal Bektenova, told Eurasianet. “None of the policemen volunteered their name, position or showed any identification. One of them shoved me.”

Bishkek deputy police chief Yerlan Atantayev told Kloop news website that the rally was broken up because of the coronavirus restrictions on public gatherings.

“We say the same thing at other rallies, and people disperse. If we do not take them away from there, then other people will arrive and start making a racket,” Atantayev said.

Women’s rights activists may be forgiven for not wanting to give too much notice about their intentions to rally. When hundreds of people turned out for a peaceful march in the city center on March 8, International Women’s Day, their assembly was assaulted by a mob of men describing themselves as traditionalists seeking to uphold morality. Police on that occasion largely looked on impassively.

Last year, police recorded more than 8,000 instances of domestic violence. In around 85 percent of the cases, complaints to the authorities were withdrawn, often under pressure from relatives.

This last episode has followed in that pattern. Even as the man’s case was being heard in court, the victim appealed to judge to clear him, insisting that the entire matter was a personal family affair. Police proceeded undeterred, however, on the basis of the video material.