Kyrgyzstan: Sifting Through the Lessons of Collateral Damage 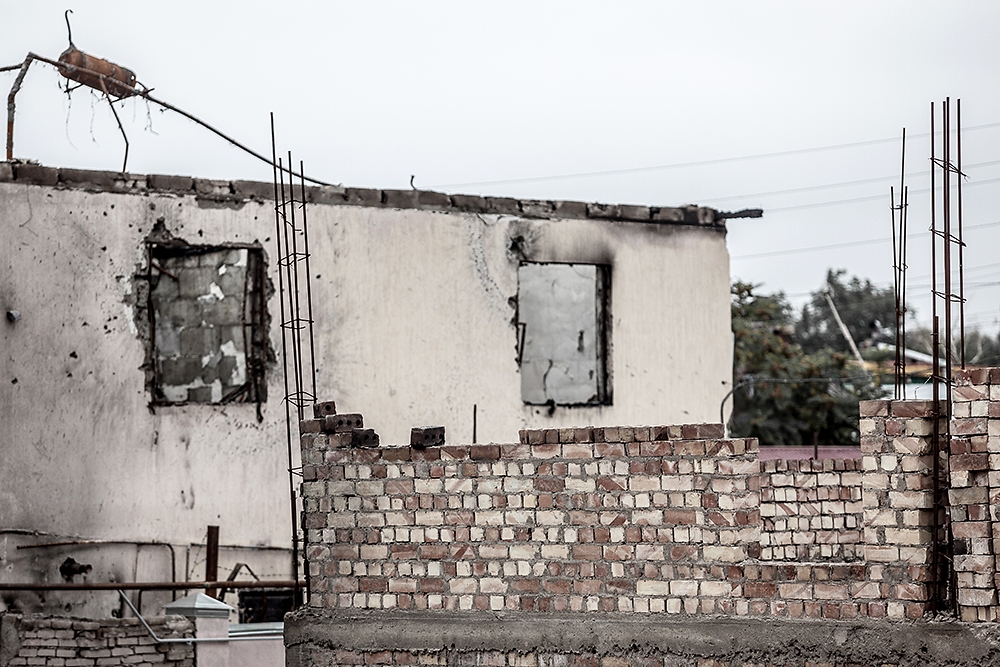 When Kyrgyz special forces swooped in on a group of suspected Islamic radicals holed up in a Bishkek house in mid-July, they brought out the heavy weapons. The rockets and gunfire fired by government troops destroyed not only the building targeted in the operation, but also three adjacent homes along Shurukova Street, and partially damaged two others.

Three months later, on October 14, the owners of two destroyed properties smiled for photographers, as officials handed them the keys to new homes. As Emergency Situations Minister Kubatbek Boronov chatted with residents, however, it quickly became clear all was not settled.

Yevgeniya Krapivina, a human rights lawyer and owner of one of the homes burned to a cinder, asked Boronov to explain when heating systems in the new residence would be installed. The minister said the work would be done, but noted caustically that Krapivina had developed a “growing appetite.”

“What are you complaining for?” he told Krapivina.

Authorities have demonstrated little desire for transparency in either the investigation into the July 16 blitz, or the clean-up operation that ensued. Difficulties experienced by victims are highlighting shortcomings in the government’s handling of the operation’s aftermath.

In an attempt to hold the government accountable, Krapivina’s family plans to file a request with the General Prosecutor’s Office to investigate how funds allocated for reconstruction were actually spent.

In the immediate aftermath of the firefight, Krapivina and others were in the dark about compensation plans, even after a flash visit from the mayor of Bishkek on the day after the special operation.

Krapivina eventually gathered friends and relatives for a small rally on the central Ala-Too square, which is across the road from the parliament and government building. The lawyer has experience in tackling difficult cases, including serving as counsel to ethnic Uzbek rights activist Azimjan Askarov, who is serving a life sentence for his claimed involvement in violence in southern Kyrgyzstan in 2010.

The Ala-Too protest appeared to have the desired effect. “It took the (Emergency Services Ministry) only 15-20 minutes to find my number and tell me that they would provide us with a tent and food,” Krapivina said.

In the days that followed, government representatives arrived with rehousing proposals.

One of the affected homeowners, Tilek Mambetaliyev, an employee with the presidential administration, said he never had any doubt the authorities would come through on their promises. “The president said the government would help us, so I was sure of it,” he said. Despite that, Mambetaliyev did not wait around for the official help and went ahead with rebuilding his home by himself.

His two neighbors, who were wholly reliant on government compensation, had a tougher time. No tender was announced for companies to do the work and builders were eventually found through a newspaper advertisement, according to Krapivina.

The Emergency Situations Ministry, which oversaw the reconstruction effort, provided no floor plans for the new homes and instead offered just an image of a generic model home erected after disasters. “We even struggled to get a list of the materials used in construction,” Krapivina said.

When Krapivina got the list, she was shocked by what she found. The prices of each material used for the construction were calculated on the basis of prices of 1984. Krapivina said that she had no way to know how the actual prices were determined and could not explain how the 1.65 million soms allocated by the government for the reconstruction of the house were used.

Krapivina’s husband, Ivan Zaryayev, also took note of several details. For example, the list of building materials showed that 40 fuse boxes were supposed to be installed in their three-room residence. “They only used six of them”, said Zaryayev, who is an electrician.

Plans included no contingencies for a ceiling or wall insulation. And the heating system — which never got fitted — was coal-powered instead of gas-powered, as had been the case before.

Cracks have already appeared in the walls of the bathroom, suggesting shoddy workmanship and the use of cheap materials. After the key handover ceremony, the new owners assumed responsibility for the maintenance of their homes, meaning any repair expenses must come out of their own pockets. “If there are any issues with this house — and there will be — we will have to pay for it”, Krapivina said.

Families received 500,000 soms ($7,200) from authorities as compensation for their material losses, substantially lower than their own estimate of 1.4 million soms.

That money will likely now go to completing restoration work.

When special forces began their hours-long operation, they did so without providing any warning to residents. Some bystanders who endured the ordeal remain bitter that officials never made any post-trauma counseling available.

Valentina Pavlovna, whose house also went up in flames, responded with anger to questions about what precautions were taken as the clashes unfolded. “My grandson was in the swimming pool in the garden when the police came and started shooting,” she said. Some residents caught in the crossfire were forced to flee burning buildings through windows.

The charred, bullet-riddled walls of the building believed to have been occupied by the alleged terrorists on July 16 still stand as a daily reminder of the unrest.

There is some relief and gratitude that any assistance has been provided. “After the special operation, we thought that we would have to rebuild our house ourselves,” said Krapivina.

But Krapivina added the experience should still serve as a lesson for the future. “We still have a lot of problems and the process raises a lot of questions that must be addressed,” she said.