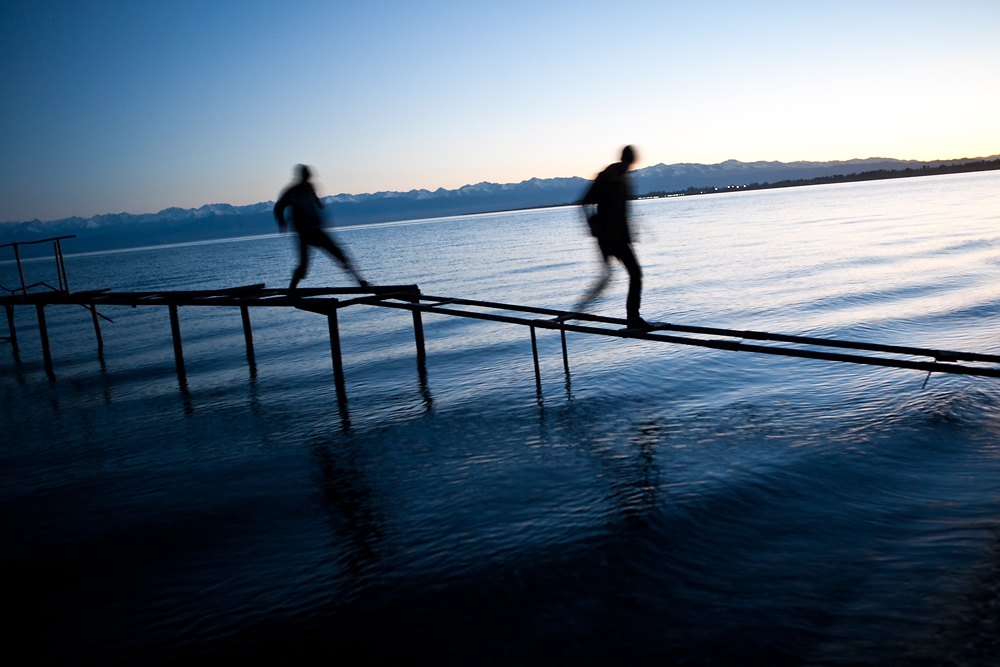 A slow-motion ecological calamity is unfolding at Lake Issyk-Kul in Kyrgyzstan. An underground plume of refined oil products – the result of a spill back in the 1990s – is migrating toward the lake and, today, it’s only a few meters away from hitting water.

During the Soviet era, a diesel and benzene storage depot sat in Balykchy, a once-bustling railhead at the western tip of Issyk-Kul that has succumbed to industrial blight over the past two decades. Following Communism’s demise, the depot’s infrastructure quickly decayed, and at some point in the mid-1990s oil products started seeping into the ground. Experts believe that nearly 600 tons of oil products, or the equivalent of roughly 4,400 barrels, have contaminated an area roughly one hectare in size, situated not far from the shore. Due to a lack of records, environmentalists studying the problem say, it is impossible to find out who was responsible for the spill, and when exactly it started.

Attracted by the alpine lake’s pristine waters, Alexander Sadykov moved to Balykchy over 20 years ago. On a recent walk through nearby steppe, Sadykov, who heads a local non-governmental organization working to spotlight the spill, points at a withered tree trunk. “This one was still alive last spring. And now look what’s happened. Even grass doesn’t grow here anymore,” he said.

Today, it’s less important to apportion blame for the spill than it is to contain the underground plume before it reaches the lake, said Evgeniia Postnova, national coordinator at the Global Environment Facility, a UN-funded project working to estimate the scope of the damage. “This is not a simple project,” she told EurasiaNet.org.

Tinatin Doolotkeldieva, a soil microbiologist at the Kyrgyz-Turkish Manas University, says the plume is now just 30 meters from the lake and could begin to seep into the water within one or two years. “This lake is our pearl,” Doolotkeldieva told EurasiaNet.org. “The consequences will be terrifying. We can’t let this happen.”

Since 2006, authorities in Balykchy have been pushing central government officials in Bishkek to help with a cleanup initiative, as well as implement a plan to move the depot further from the lake. But not much has been accomplished to date: the city lacks resources to move ahead with its plans, and is having trouble attracting the central government’s attention, according to Begaim Algozhoeva, Balykchy’s deputy mayor. Algozhoeva added that Russian energy giant Gazprom, which currently operates the depot, has helped repair local pipelines and equipment, “but this is not enough to cope with the consequences” of the spill.

Central government foot-dragging is difficult for many locals to understand. When a truck carrying cyanide to the Kumtor gold mine spilled into a tributary on the far side of the lake 1998, it became a national issue that is still hotly discussed. But the Canadian-owned Kumtor is a political football that national politicians use to make a name for themselves. Though Issyk-Kul is a protected bio reserve – described by UNESCO as “home to many ecosystems of global importance” with “a wide variety of endemic species of wild fauna and flora,” including some endangered birds – without someone to blame for the slick, politicians seem indifferent to getting involved in the cleanup.

While the amount of oil products threatening the lake is relatively modest when measuring the Balykchy situation against other mishaps around the globe in recent years, the reputational risk for Issyk-Kul is enormous. Tourism is a major source of income for local residents, who already suffered last year when visits dropped due to Kumtor-related political unrest. Even if a comparatively small amount of oil starts polluting the waters, the news could keep vacationers away for years to come.

One cleanup option that local researchers are exploring is bioremediation, a process in which microorganisms that feed on petroleum products are introduced into the soil. Postnova, the coordinator at the Global Environment Facility, says this option is likely to be recommended by her team.

Manas University is ready to help supply bacteria (such as Pseudomonas, Arthrobacter, Rhodococcus, and Streptomyces) as an “emergency” measure before planting trees and other vegetation to help clean the soil, said Doolotkeldieva. She has carried out tests with soil from the affected area that she says have been successful. The process is expensive and would require financing, but could neutralize the contamination within six months, Doolotkeldieva says.

Some scientists are skeptical. William Mohn of the Department of Microbiology and Immunology at the University of British Columbia explains that while bioremediation has worked in some cases, success depends on a variety of factors, such as type of petroleum product, type of soil, and other environmental conditions. “Microorganisms are an attractive product for companies to market … but have not been rigorously shown to be effective,” Mohn said.

Back on the sandy shores of Issyk-Kul, Sadykov is worried that time is running out. “What will we leave behind for our sons? Deserted land? We need to save what we have today, to save nature,” he said.