The White Falcons were scuppered by some highly dubious refereeing. 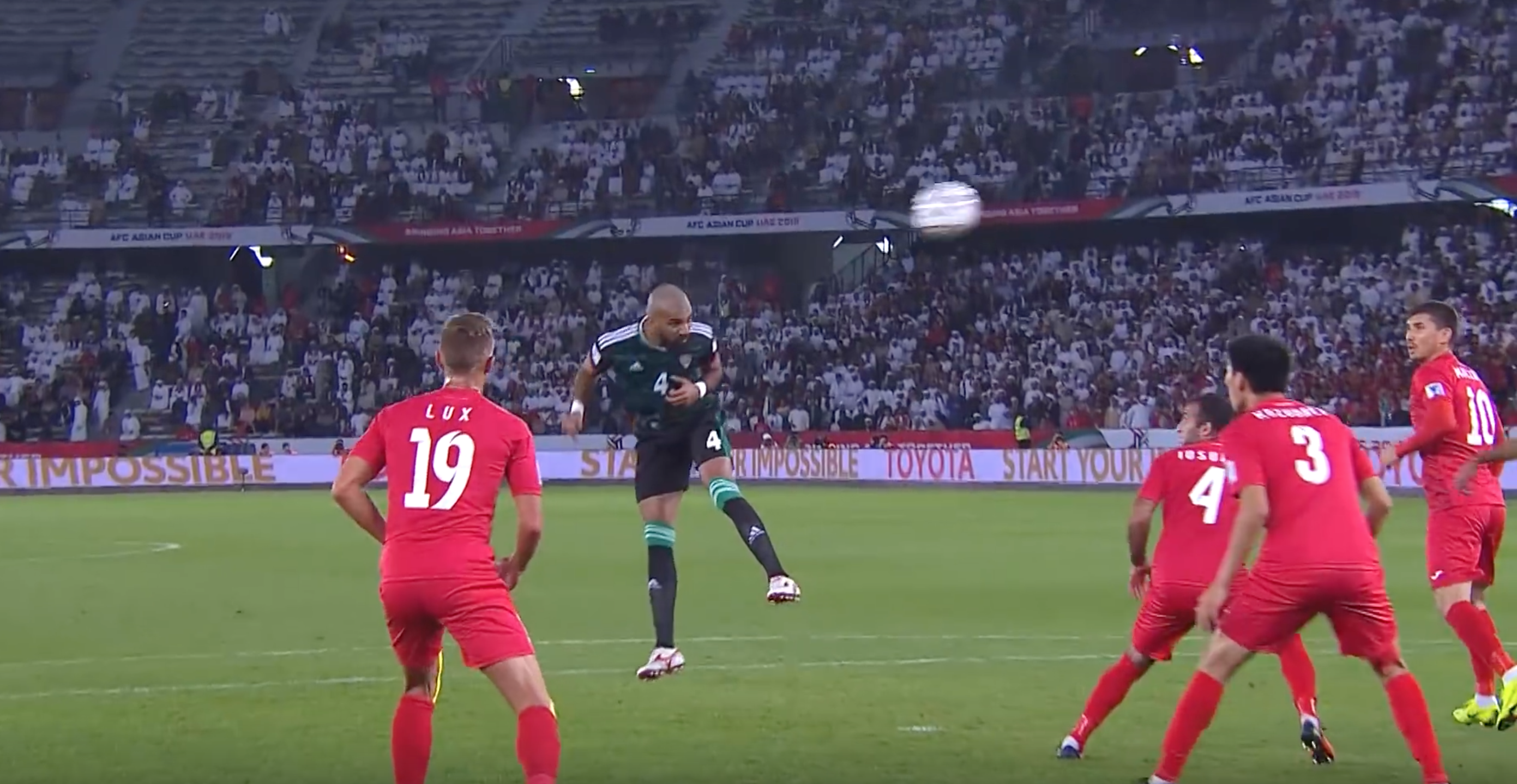 UAE's Khamis Esmaeel putting his side ahead in the 13th minute of the game. (Photo: Screengrab from AFC official YouTube channel)

By any measure, Kyrgyzstan’s run to the knockout stages of the AFC Asian Cup – an international soccer tournament the country had never before qualified for – was a phenomenal success.

But the nature of their 3-2 defeat against tournament hosts United Arab Emirates on January 21, decided by a dubious penalty decision in additional time, has left a sour taste in the mouths of supporters.

A few years ago, Kyrgyzstan would not have dreamed of reaching this stage. A 4-1 defeat to Tajikistan in a friendly in Bishkek in 2013 marked something of a nadir for the domestic game. The Philippines, whom Kyrgyzstan routed 3-1 in the group stages of the Asian Cup last week, beat the team nicknamed the White Falcons twice in 2016.

Now, Kyrgyzstan is sitting pretty in 91st, 27 places above the Philippines in the FIFA rankings, having risen 24 places in the last year alone.

Such rankings leaps in the lesser half of the football world are in and of themselves not necessarily indicative — they may be the result of victories over a string of easy opponents, say, or spectacular failures on the part of other low-achievers. But the Kyrgyz proved they were the real deal with a string of full-blooded performances to secure their passage through the group stage at the Asian Cup in the UAE.

In addition to the mauling of the Philippines, the team went toe-to-toe against South Korea – a top-tier team considered among the favorites to win the tournament – and lost by a very respectable 1-0.

Then there was the opening defeat against China, a game Kyrgyzstan was on course to win before it turned on a catastrophic goalkeeping blooper in the second half. That inaugural major tournament game came on the same day that hundreds protested against Chinese migration and a host of other ills perceived to be emanating from the Middle Kingdom.

Sentiments towards Beijing were not helped by the fact it was a Chinese referee that awarded a very disputable match-winning penalty against Kyrgyzstan in the 103rd minute of their contest against the UAE.

Before and after that contentious moment Kyrgyzstan resembled a brave team that didn’t know when it was beaten.

Twice coming back from behind against a side that was clear favorites to win – once in the last minute of normal time – Kyrgyz players hit the frame of the goal three times over the course of the biggest fixture in the country’s 27-year independence.

The last of these near-misses came in the final minute of added time when Tursunali Rustamov, scorer of Kyrgyzstan's second goal, burst onto a loose ball in the penalty box and smashed it against the crossbar.

Kyrgyz supporters inside the stadium were visibly overwhelmed with emotion as they applauded their players at the finish.

On social media, adulation of the players was accompanied in many posts by the hashtag #FuMingShame, a reference to the Chinese referee.

Once the dust has settled on this sporting high point for the country, the question will be where Kyrgyz soccer can go from here.

Although the fruits of Kyrgyzstan’s 2010 revolution are debatable as a whole, the fact that this year marked a turning point for the beautiful game there is enshrined as fact in the country's profile on FIFA’s official website.

Moreover, the upturn in the sport was overseen by the son-in-law of the country’s embattled former President Almazbek Atambayev, Semetei Sultanov. But Sultanov's period at the helm came to an abrupt end when he left his post on January 10, immediately after Kyrgyzstan progressed past the group stages.

He stressed that his decision had nothing to do with external pressures, such as the ongoing political struggle between Atambayev and his successor, President Sooronbai Jeenbekov.

An alternative interpretation might be that Kyrgyz authorities didn’t like the idea of an ex-presidential in-law basking in the glory of a tournament run that could have gone even further.

Sultanov claimed credit in his leaving statement for fundamental improvements to the Kyrgyz game at grassroots level as well as in the national team.

Whether or not that is true, several of the stars that made the difference for Kyrgyzstan at this tournament were shrewd acquisitions who had made their footballing careers beyond the country’s borders, rather than homegrown stars.

Vitalij Lux, the handsome striker who netted a hat-trick against the Philippines, was born in Kyrgyzstan but moved to Germany when he was six.

His call-up to the national squad came in 2015, when he was playing lower league football in Germany. Classy midfielder Edgar Bernhardt’s emergence for the national team is a similar story.

Given Bernhardt will be 36 and Lux 33 when the next Asian Cup comes around, there are fears that Kyrgyzstan’s impressive debut in international football proper may also be a swan song.

Supporters will hope otherwise, but for the moment they seem content to bask in the pride and perceived injustices that are the divine right of any soccer supporter. 2023 is a long way away.