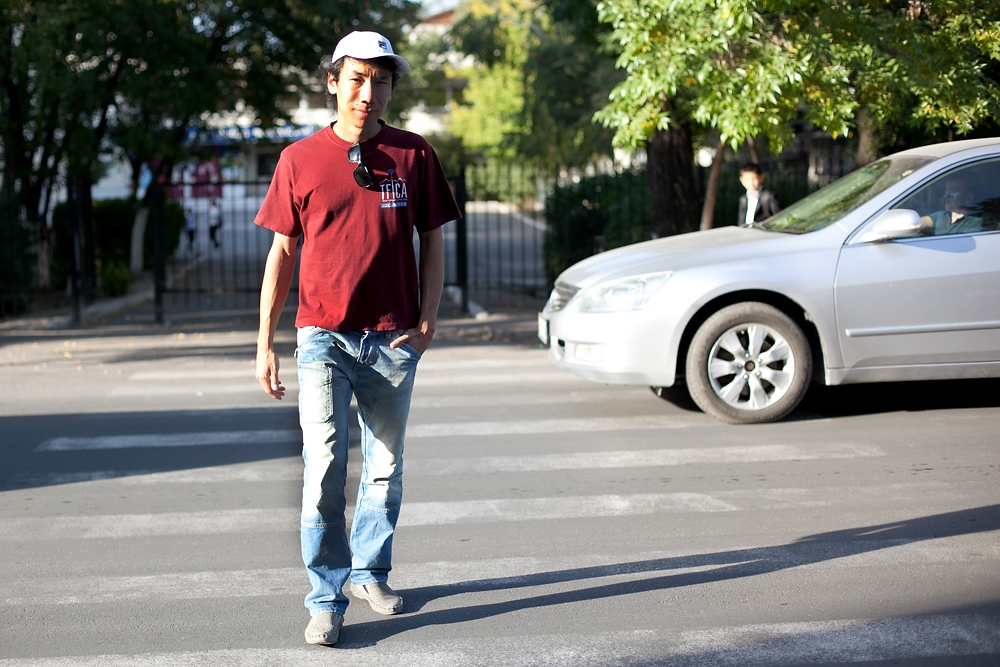 Activist Aibek Baratov uses one of the crosswalks he painted last March outside a school on Bishkek's Bokonbaeva Street. Baratov, who has thousands of active online supporters, has amassed something of a cult following in Bishkek in recent years. (Photo: David Trilling)

Late at night, Aibek Baratov is driving around Kyrgyzstan’s poorly lit capital testing his latest project. Tired of hearing about pedestrian deaths, and frustrated with a lack of interest among Bishkek city officials to address the hazard, the activist took matters into his own hands and installed reflective signs marking crosswalks.

“This is a problem that bothers me personally, and as it turned out, it bothers a lot of other people, too,” he explained. “Every day each one of us goes to school or work and we face such rudeness on the streets.”

“When I try to cross the road, and cars almost drive over my toes, it irritates me a lot,” he added.

Baratov, 31, has thousands of active online supporters, and he has gained something of a cult following in Bishkek in recent years. It all started in 2009, when he began posting videos of traffic violations, by drivers and police, on his Facebook page.

Over the past 18 months, Baratov has taken his online campaigning to the streets – literally. He has organized campaigns to increase road safety and attract the attention of the mayor’s office to the city’s potholed streets, a topic of endless grumbling from drivers. Baratov’s followers support him not only with Facebook “likes” and “shares,” some donate cash for necessary equipment like paintbrushes and garbage bags.

Pedestrian safety is a concern that appeals naturally to many residents in Bishkek, where crossing the street can be a terrifying experience. A 2009 report from the World Health Organization (WHO) said pedestrians are involved in 43 percent of all traffic-related deaths in Kyrgyzstan. (The global average is 22 percent.) The figure was 16 percent in neighboring Kazakhstan, which is larger and wealthier and where cars on central thoroughfares of the country’s largest city, Almaty, tend to stop at crosswalks.

Many blame Kyrgyzstan’s feeble rule of law for the disregard for traffic regulations, others cite the ease with which police can be bought. But there are also indications that leading governmental authorities do not see road safety as a high priority: the WHO notes that Kyrgyzstan has no national road safety strategy.

Last month, Baratov grabbed Bishkek’s attention by highlighting a video
showing a woman in a Lexus SUV leading police on a dangerous chase through the city to her office. In the video, when police confronted the woman, Nazik Chodronova, and seized her license plates, she shouted obscenities and threatened to call a high-placed friend. Later, the police were forced to return the plates. But Baratov’s post received so much attention on social networks that the woman was publicly shamed and forced to pay a token fine, approximately $20. Online commentators say the small fine, and the driver’s sense of impunity, underscore just how far Kyrgyzstan has to go to civilize its driving culture.

One of Baratov’s initiatives aimed to attract Mayor Isa Omurkulov’s attention to Bishkek’s litter-strewn streets. In March, Baratov, along with 50 volunteers that he recruited online, collected a hundred bags of garbage and left them in a pile in front of the mayor’s office. “There was much more garbage, we just didn’t have enough bags,” he said.

In June, again with the help of volunteers, he painted officials’ faces into potholes.

Baratov’s campaigns have called attention to possible criminal wrongdoing. This year, for example, he and his supporters found that Bishkek’s crosswalks are 10 centimeters narrower than the standard set by the government, and that the city is using below-par paint that wears off quickly. “The mayor’s office saves big money on this. And this money ends up in someone’s pockets. I just wanted to open people’s eyes,” said Baratov.

A spokeswoman for Mayor Omurkulov refused to discuss crosswalk regulations or corruption allegations. The relevant city department did not reply to repeated requests for comment.

Born and raised in Bishkek, where he attended university, Baratov received a master’s degree in business administration in the UK. “You come back [from abroad] and see what’s missing, what’s being done wrong, and this contrast forces you to move and make the government move with you,” he said. After returning to Kyrgyzstan in 2008, Baratov worked with a local non-governmental organization, where he realized that social media could help him spread his message to the public. With the notes he posts on his Facebook and Twitter pages often picked up by local media, he has become an influential opinion-shaper.

The Bishkek mayor’s office, which until recently had not reacted to any of Baratov’s campaigns, finally, in August, seemed to throw its support behind the most recent one – installation of the reflective signs. “It is necessary to attract drivers’ attention to pedestrians, especially now that the new academic year has begun and many students will be out in the streets,” said Edita Ayipova, a spokeswoman for the mayor’s office.

“Campaigns that are related to security and enhancement of our city are supported by the mayor’s office. We believe that there should be more activists among residents,” Ayipova told EurasiaNet.org shortly after Baratov was invited for an meeting with Omurkulov. During the August 19 meeting, the mayor promised to send workers to help install the signs and provide safety for the volunteers. The workers never showed up, says Baratov, who went ahead with the installation anyways.