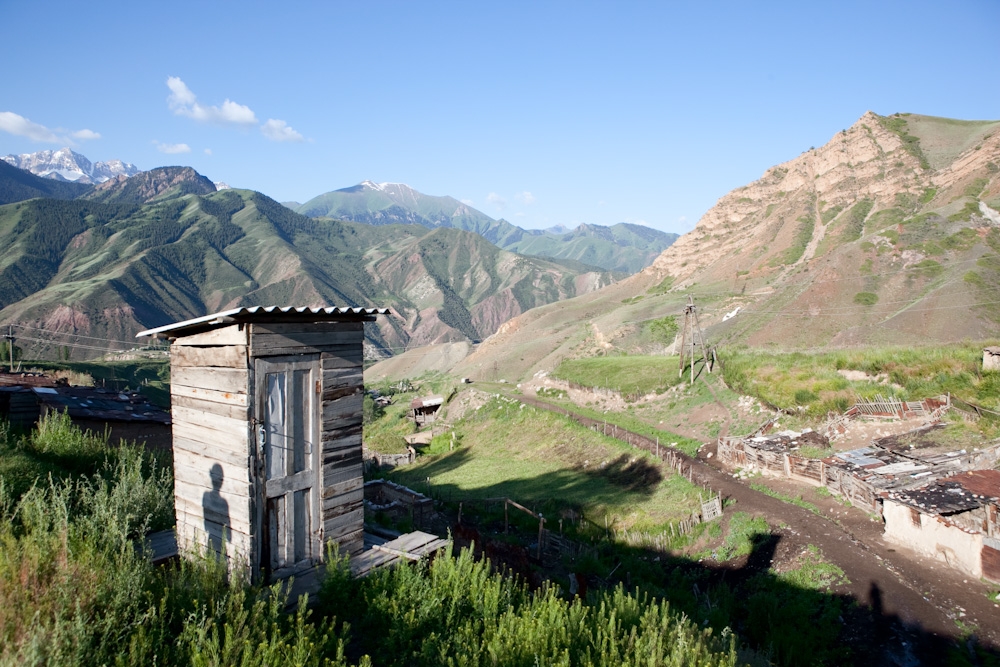 Nestled high in a stunning valley with an abundance of mineral deposits, residents of Min Kush once had many reasons to boast.

Meaning "1,000 Birds" in Kyrgyz, the industrial town was known throughout Kyrgyzstan as "little Moscow." Despite being a closed zone in Soviet times -- not appearing on maps and requiring special permission to enter -- people from all over heard about its stores stocked with imported fruits, a wide selection of shoes and jewelry, and plentiful, lucrative jobs. Salaries were 50 to 100 percent higher than elsewhere. Min Kush's reputation was such that there was a waiting list to work in its factories.

"They would bring fresh beer from [the northern city of] Karabalta every morning at 7:30," recalled Kanibek, an electrician, with a grin.

But the town bore another, more troubled, legacy: it was one of the Soviet Union's leading sources of uranium. Workers were paid well in part so that they would keep secrets and ignore the health hazards, including the high rates of cancer experienced by miners.

The town's remote location, two hours from the nearest settlement, ensures that it remains isolated and forgotten. The pavement eroded long ago and landslides frequently close the sole dirt road connecting Min Kush with the outside. Up to 80 percent of its population has departed since the Soviet collapse in 1991, mostly ethnic Russians and Germans. Factories closed. Stores vanished.

With the looting, some parts of Min Kush look like the worst-hit districts of Kabul after the mujaheddin fighting in the early 1990s.

Scavenging factories for scrap metal, 13-year-old Nuradil says he is saving to build a house in Bishkek, the capital. He can sell each kilo he excavates for seven soms (about 16 cents). But it is the rebar in the former electrical plant that is most valuable. In three hours he can scrape and wield out one meter of the rusting rods, earning 32 soms (75 cents).

Much of what has any value has already been deconstructed. "There is nothing left, only bricks," laments Oleg Nekritov, a cardiologist. "People sell the bricks, because they have to live somehow; there are no jobs. All the best and big parts of the factories were taken away long ago."

The town these days functions only on a minimal level. "About 70 percent of our people are unemployed. Only hospitals, kindergartens, the post office and schools work now. Last year, some coal mines opened, but only 15 or 20 people can work there and they don't solve the problem of unemployment," said Mayor Toktobubu Madieva. "Our village government is the poorest in the republic." On the day after speaking to EurasiaNet this summer, Madieva left Min Kush for good, striking out in search of work elsewhere.

Madieva expressed concern about the health risks posed by uranium mining. Yet she was clearly proud of what Min Kush used to be. "We had uranium mining here until 1969. The USSR's first space rocket was built and powered with our uranium. Back then there were 20,000 people living here. Everything ended with the collapse of the Soviet Union," she said somewhat wistfully. "Most of the people were specialists coming here from other [former Soviet] republics."

The harmful side of the town's mining past continues to be felt today. Uranium tailings, a radioactive byproduct, are often found underground, in side valleys along streams. "Uranium tailings are dangerous due to the high risk of landslides in this area. The tailings are located right near the rivers. [?] If all of that were to get washed into the Naryn River, which flows into the Syr Darya [and Uzbekistan], it might cause a regional catastrophe," she said.

Others say the radiation risks are overblown. "They should look at me, my 76-year-old father and my five kids," said Nekritov, the cardiologist. "Radiation in Kyrgyzstan is all over the place. In some places it is normal; in others it is higher. Yes, we have some radiation in the locations of tailings. Also, there are some deep coalmines where there may be radiation as well. Here, where we eat, live and work, it is fine."

Nekritov is part of a small group of dedicated locals who believe Min Kush still has potential. "We could organize here in Min Kush a very nice tourist zone. We could use honey and kumis [fermented horse milk] for treatment. It is very good for people who have tuberculosis, lung, heart and intestinal diseases. We have clean air and nature."

Conflicting studies commissioned by Kyrgyz and foreign aid agencies have provided no definitive answers about the level of radiation risk, although anecdotal evidence suggests rates of cancers and other illnesses are higher than elsewhere.

Even if the health problems are overstated, many say they would leave if they could. "We have nowhere else to go. Look, we have not had hot water and heat since the collapse of the USSR," explains 70-year-old Ziha-eje.