Tashiyev's standing has been compromised, but he will likely ride out the crisis. 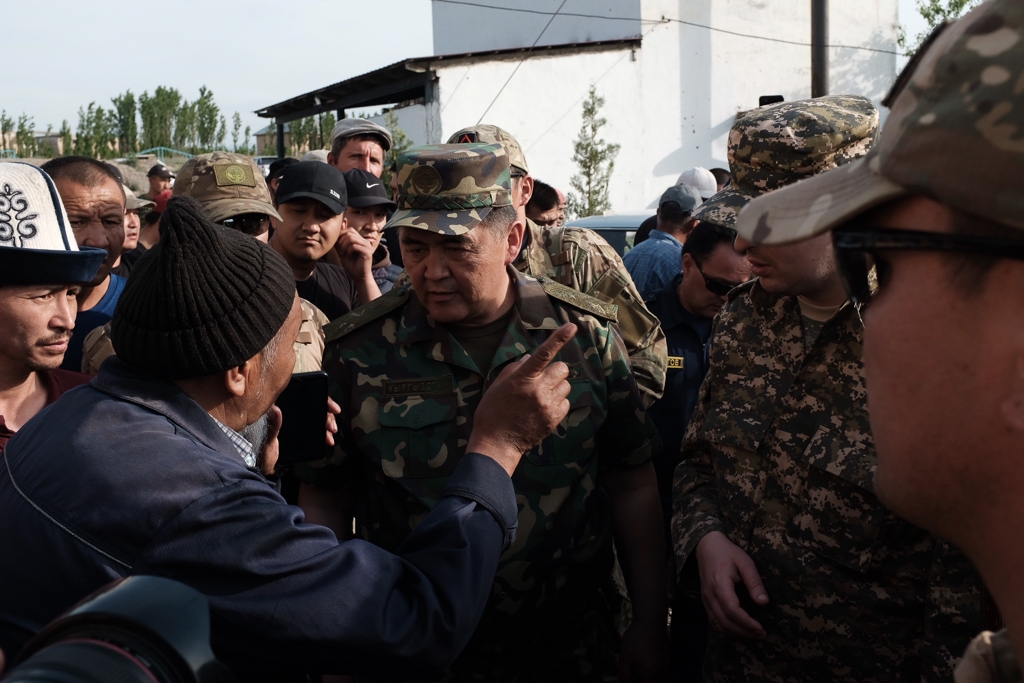 Tashiyev speaking to the public in Batken. (Photo: Danil Usmanov)

As recriminations fly over the bloodshed on the Kyrgyz-Tajik border, one man’s role is coming under particular scrutiny.

Their alarm only deepened when the GKNB’s writ was expanded to cover the border service, thereby mirroring the structure existing in more authoritarian neighbors, like Tajikistan.

Following attacks that left 36 people dead and dozens of homes and two schools destroyed on the Kyrgyz side last week, Tashiyev has been compelled to deal face-to face with villagers returning to settlements they barely recognize.

Many have argued Tashiyev’s blustering behavior over the border may in part at fault for what has happened.

Tashiyev, who spent most of the last decade in opposition, seemed genuinely to want to finally solve Kyrgyzstan’s disputed borders – not only with Tajikistan, but Uzbekistan too.

Results suggest he fell short on both counts.

In Tashkent, he found a government as keen on a prompt resolution to the decades-old delimitation standoff as Bishkek was. But after the countries agreed a draft treaty for full delimitation in March, he encountered opposition to proposed land and water swaps from communities in southern Kyrgyzstan enraged that they had not been consulted.

Addressing gatherings of the type that once met him with enthusiasm as a government opponent, Tashiyev pledged concessions, undermining Kyrgyzstan’s commitments in the process.

“I’ll try to offer [Uzbekistan] not 50 hectares in exchange, but only 20 hectares,” Tashiyev said of land close to a strategic reservoir during a gathering on April 19, holding a microphone in one hand while pointing at a map with a stick with the other. “I’ll try, OK? Everything else, God will decide.”

With Tajikistan, Tashiyev faced a negotiating partner reticent to making concessions. His own stance was also less conciliatory and bound to irritate sensibilities in Tajikistan.

His remarks about Vorukh, a Tajik exclave inside Kyrgyzstan, proved especially incendiary.

Tashiyev on March 26 said Bishkek had offered Tajikistan a swap deal that would see 120-square-kilometer Vorukh absorbed into Kyrgyzstan in exchange for an area elsewhere of identical size in the southern Batken region.

Its attitude to the proposal was instead conveyed by a proxy in the form of ex-Tajik foreign minister Hamrokhon Zarifi. He branded the comments “contrary to all the canons of the negotiation process, ethics and self-respect.”

In another Facebook post, the former diplomat recalled an episode in 2012 when Tashiyev, then an opposition politician, had led his followers over the metal gates of Kyrgyzstan’s main government building during a rally. “Now [he’s] decided to try out this experience on the territory of another sovereign state,” mocked Zarifi.

On April 9, Tajik leader Emomali Rahmon made a trip to Vorukh, where he reassured residents that no swap deal was in the offing. He inaugurated new premises for special forces there for good measure.

Since hostilities ended on May 1, the two countries continue to contest the narrative of who opened fire first. The definitive answer to that question may be lost in the mist of battle.

What is better understood is what Tashiyev was up to when the violence broke out: He was making a trip to Europe. His office said it was for medical reasons. Kyrgyz social media commentators, meanwhile, cocked eyebrows at reports that Tashiyev’s son, an apprentice pro-footballer based in Spain, was celebrating his birthday on the same day.

Tashiyev said on Facebook that when he learned about the conflict, he swiftly canceled his plans and returned home “without even making it to the hospital.”

That evening, when an official ceasefire was signed after hours of intense fighting, Tashiyev’s name was conspicuously absent from the document alongside that of his Tajik counterpart, Saymumin Yatimov. Instead, the now-since dismissed governor of Batken region, Omurbek Suvanaliyev, had signed for Kyrgyzstan.

When Tashiyev did finally make his first public appearance in Batken on April 30, the full extent of the devastation wrought by Tajik attacks on Kyrgyz villages was becoming known.

After he emerged from talks with Yatimov the following day, Tashiyev appeared defeated and deflated. Yatimov, on the other hand, looked buoyant.

None of this means Tashiyev’s resignation is in the cards. He is widely viewed as one half of a tandem with Japarov, having helped ease his companion’s return to the political scene in October. Instead, three Batken district chiefs have been fired from their positions, while Suvanaliyev has been rotated out of the regional governor post.

Tashiyev will live to ride another day, but his star is no longer shining quite so bright.