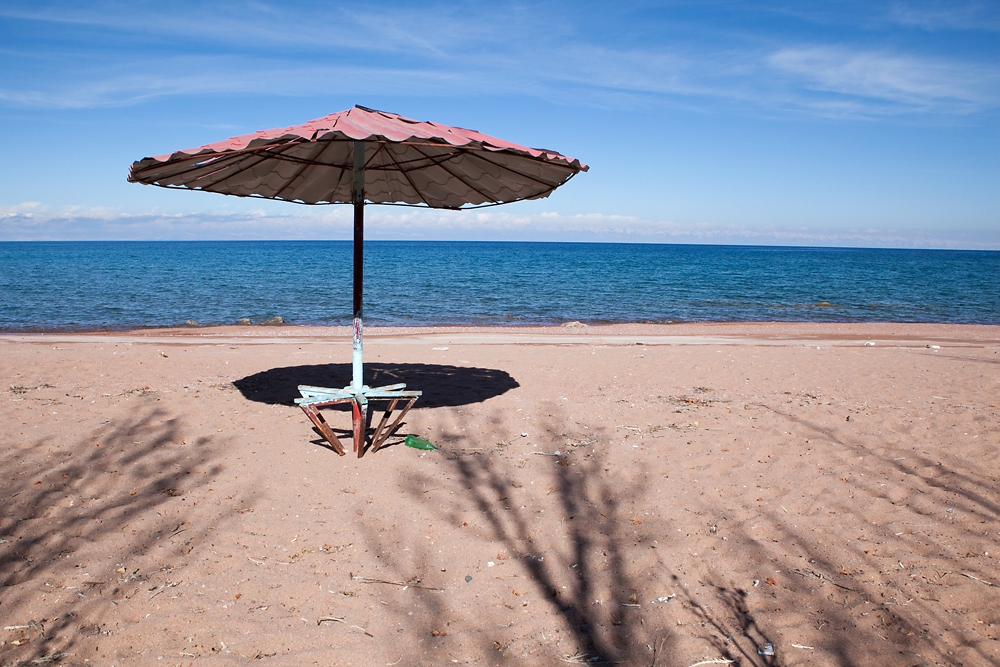 Olga Gotovshikova stares out at Lake Issyk-Kul from her shore-front guesthouse. Last year she could only dream of a minute like this to rest; the place was packed with 60 tourists at a time, all summer long. But now she sits anxiously in the deserted guesthouse.

“We are left with nothing. This has never happened before,” Gotovshikova, 45, says.

Like many others who depend on the short summer tourist season at Issyk-Kul, Gotovshikova blames the protests that shook the province earlier this year for the drastic drop-off in visitors: “Travelers are calling. Everyone is asking the same question: Is everything ok? Is it safe? I’m tired of persuading people that everything here is back to normal.”

The series of demonstrations that, according to locals, spoiled the tourist season started with a protest outside the Kumtor gold mine on the southern shore of the lake in late May. Hundreds blocked the road to the Canadian-owned mine and cut the electricity, demanding increases in social spending. Approximately 55 people were injured in clashes with police; the president declared a state of emergency.

Kumtor-related violence is nothing new for Kyrgyzstan, but then another protest, in early July, struck the heart of the Issyk-Kul tourist industry right at the beginning of the season. On July 3, approximately 100 protestors in the resort town of Cholpon-Ata demanded that four men suspected of assaulting a police officer be released.

Though that protest only lasted several hours, it frightened tourists, says Gotovshikova. It also revived long-standing fears among foreigners that Kyrgyzstan is too unstable a destination for a restful vacation. Many of Gotovshikova’s regular guests come from neighboring Kazakhstan, she explained. One, after a seven-hour trip by car, got stuck in a traffic jam caused by the protesters. He called Gotovshikova to say that he was returning to Almaty, she says, and added, “I will tell everyone not to come here.”

At the beginning of the season, officials were optimistic, predicting an increase in visitors to Issyk-Kul this summer. Most tourists are domestic, but thousands are from Kazakhstan and Russia.

But by late July, the Ministry of Culture, Information and Tourism was backtracking on its prediction. On July 24, the Vechernii Bishkek newspaper, citing the ministry, reported that two-and-a-half times fewer tourists have visited Kyrgyzstan this year compared with the same period last year.

The Finance Ministry, in a June press release, warned that the low visitor numbers would affect government coffers. “Most of the [tax revenue of the Issyk-Kul region] is, of course, related to tourism. Disruption of the tourist season will, consequently, cause a risk of revenue shortfalls in the region,” the Finance Ministry said.

Some blame unseasonable weather for the downturn, as well as the ongoing economic crisis in Kyrgyzstan.

But Gotovshikova is convinced that if order is restored in Kyrgyzstan, the tourism business will flourish. She blames locals’ “short-sighted” actions.

“Why is everything resolved in this way?” she said, referring to the protest trend in the country. In 2012, there were 1,286 protests, both large and small, across the country, according to the prime minister’s office. “If one little thing goes wrong, we block the road; we strike. What is this?” she says. “Let them [protesters] count how much money the region has lost because of that.” Gotovshikova explains that many families in the region count on tourism to survive.

For 12 years, Farida Kubanychbekova’s family has operated a small café near one of the largest hotels on the northern shore. The café, outside of Cholpon-Ata, is her family’s principle source of income. She says that if the season continues so badly, she won’t be able to pay the rent and could lose the lease. “We will struggle,” she sighs, also blaming rioters: “Everything that happens here is published on the Internet. Many people abroad find out about what’s going on and they don’t want to visit.”

Officials remain optimistic. Daniyar Kazakov, director of the Tourism Department at the Ministry of Culture, Information and Tourism, claims that it is still too early to calculate losses. Speaking of the drop in visitors, Vechernii Bishkek quoted him as saying on July 24, “This is only preliminary statistics for June and half of July. There is still a month and a half which is the most profitable.”

Gotovshikova is not soothed, however. She’s losing money every day. “At best, I’ll be able to cover my expenses,” she says, staring alone out at the empty beach.