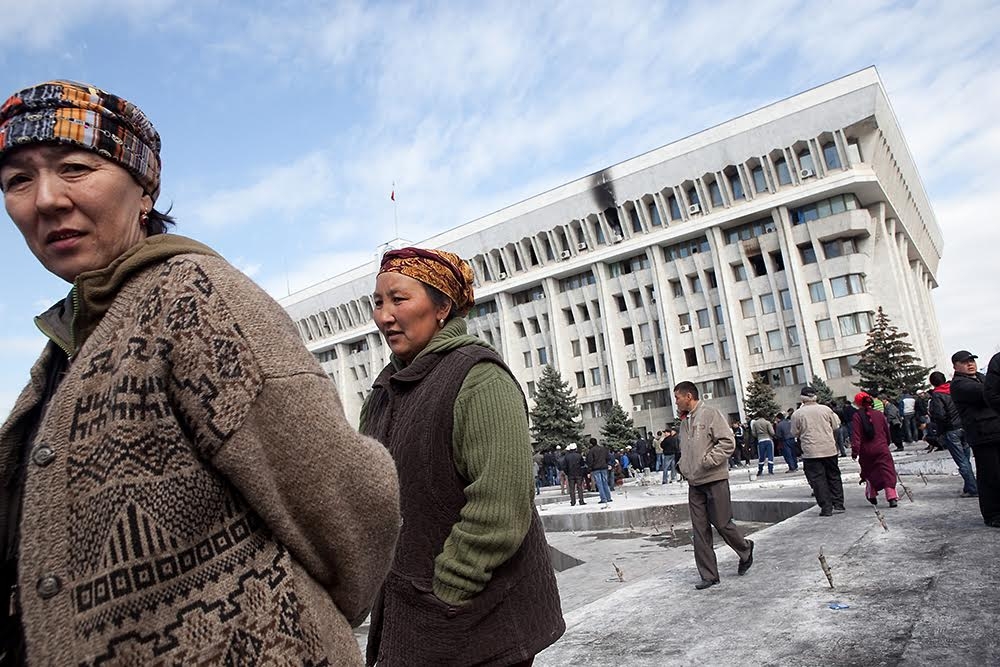 During Kyrgyzstan’s political upheaval in April 2010, crowds gathered in central Bishkek outside the fire-scarred White House – then the seat of the president, but after the coup becoming the parliamentary assembly building. Kyrgyz President Almazbek Atambayev declared that parliamentary elections are to be held Oct. 4. (Photo: David Trilling)

On a baking July day in Kyrgyzstan’s capital Bishkek, under-employed taxi driver Sadyrbek Kerimov, 34, stooped over a frothing irrigation channel to splash water onto his face.

“There are three things you cannot escape in this country,” he complained. “Heat, death and politics.”

With the president decreeing parliamentary elections are to be held on October 4, things are about to get hotter for the country’s excitable political class.

Kyrgyzstan is an outlier in Central Asia with its history of hosting genuinely competitive votes, so when campaigning officially begins on September 4, countless billboards will begin springing up across the country.

The 120-member Jogorku Kenesh is in recess until the beginning of September, so many lawmakers are still busy posting photos on social media of their breaks to Europe and the United States – destinations well beyond the means of most regular folk.

Public attitudes on the parliament in Kyrgyzstan are decidedly mixed. Results of a survey conducted in February-March by the International Republican Institute showed that while 54% of respondents assess parliament positively, another 42% deem it to be deeply corrupt. A further 37% consider the Jogorku Kenesh only “somewhat corrupt.”

President Almazbek Atambayev – whose Social Democratic Party of Kyrgyzstan (SDPK) is all but certain to lead the pack – fueled the prevailing anti-Western mood in remarks to reporters on July 27.

That kind of bluster may not be enough to win over disgruntled voters like taxi driver Kerimov, whose occasional vocation is reflective of surplus labor in a poor, remittance-dependent post-Soviet economy.

“When I have clients, I drive them places,” he told EurasiaNet.org. “What have these MPs done in five years? Look at the roads. They are still the same as five years ago! They use our money to fight for power!”

Although favorite, SPDK is limited by the constitution from winning any more than 65 seats. (Any changes to the constitution require support from two thirds of parliament). That has kindled speculation that the president’s office may resort to various ploys to make the legislature bend to its will.

“They have an advantage in terms of administrative resources, but not the same advantage as previous Kyrgyz ruling parties would have had,” said Emil Joroev, a politics professor at the American University of Central Asia. “To get any strong majority, SDPK would need one or two satellite parties to enter the parliament too.”

One recently created party possibly fitting the satellite bill is the controversially named Kyrgyzstan, which has been holding showy rallies across the country showcasing leading musicians. Robustly patriotic-minded people bristle at exploitation of the country’s name for political ends.

Partly bankrolled by the country’s leading vodka producer, Kyrgyzstan has an emblem bearing a striking resemblance, oddly enough, to the all-blue national flag of Kazakhstan. That is an apparent nod to those wishing to change Kyrgyzstan’s own deep-red flag to a less blood-like color that some feel would be more in keeping with the national character.

But SDPK’s bid to dominate the parliament could be undermined by two well-funded north-south tandems whose existence testifies to an electorate still divided along regional lines.

The alliance formed by Butun Kyrgyzstan and Emgek can draw on the financial resources of northerner Askar Salymbekov and the political capital of nationalist southerner Adahan Madumarov. Meanwhile, Respublika and Ata-Jurt are being powered by the deep pockets of former Prime Minister Omurbek Babanov and a firebrand former boxer and son of the south, Kamchybek Tashiev.

Elsewhere, the Ata-Meken party that scraped into the legislature in 2010 appears to be enjoying a renaissance on the back of its support for nationalizing the Canadian-run Kumtor gold mine, which accounts for roughly one-tenth of the economy.

In the run-up to the vote five years ago, veteran party leader Omurbek Tekebayev’s chances were badly damaged when Russian media aired grainy video footage appearing to show the politician in an extramarital clinch.

In those days, Tekebayev, who authored the current constitution, cast himself as a pro-Western politician. He is unlikely to make the same mistake again.

It may still be early to divine which issues will dominate – although the smart money is on “stability” becoming a mantra for many – cynicism is already strong.

Azamat Akeleev, a Bishkek-based economic consultant, said that while a “small minority” of deputies in the next convocation will work for the benefit of the country, “the majority of places on the party lists will be taken by people for whom politics has become a business.”

“They come to power to earn money and defend their business interests,” Akeleev said.

Cholpon Djakupova, an opposition-minded political commentator and head of the Adilet legal clinic, was less charitable.

“Parties as such do not exist in Kyrgyzstan. The next parliament will be full of bazaar chiefs and grey personalities,” she told EurasiaNet.org. “The country is ruled by a band of idiots.”