At least 79 front line workers have fallen sick as of April 13. 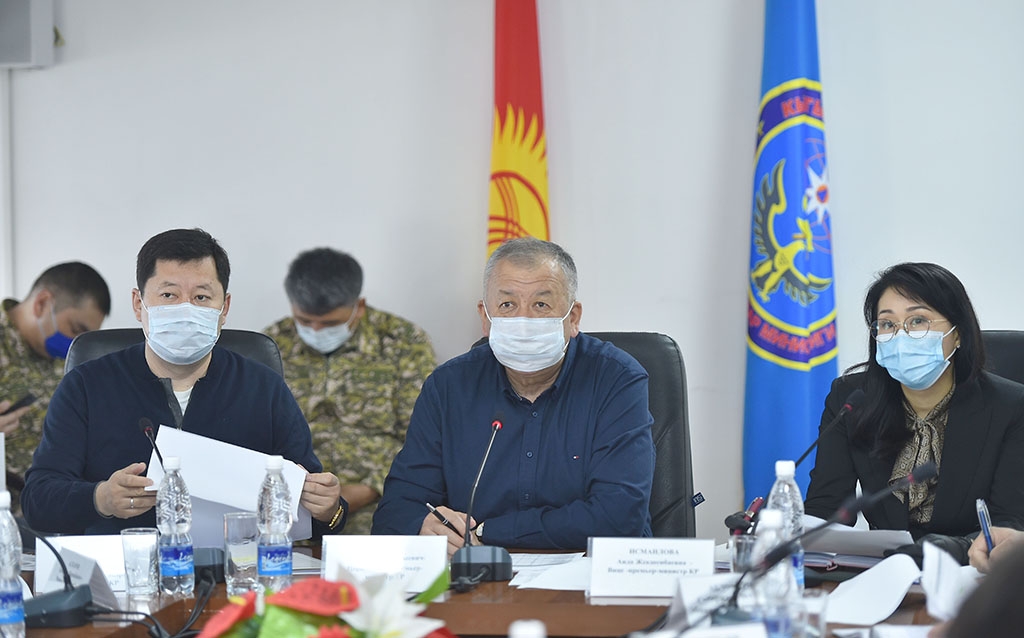 Kyrgyzstan is struggling to keep health workers safe from the spread of the coronavirus, sparking calls for the government to provide more protective equipment and to refrain from scapegoating frontline medics.

As of April 13, at least 79 of the 419 people diagnosed with COVID-19 were known to be health sector staff. And the problem appears to be escalating rapidly. That number was 39 before the weekend.

The medics infected with the virus include doctors, epidemiologists and a variety of support staff. At least half of the carriers work in the southern Osh region, which has emerged as a coronavirus hotspot since the crisis erupted.

The government has said it will provide every healthcare worker diagnosed with COVID-19 a compensation payment of 200,000 som ($2,570). In the event of a fatality, families will be eligible for a 1 million som ($12,850) payment.

Medical workers exposed to situations of high risk are also to been given salary increases of anywhere between $370 and $570. The Health Ministry has already effected more than $40,000 worth of such emergency bonuses.

All these payments are coming out of dedicated funds set up by the government to tackle the coronavirus situation in Kyrgyzstan. As of April 8, that war chest contained around $1.3 million.

The Health Ministry has received some in-kind aid to help shield staff from the coronavirus. Last week, the Asian Development Bank and UNICEF donated 1,300 protective suits to front-line health workers. Deliveries of other essential equipment, such as ventilators, are expected in the weeks to come.

The growing number of coronavirus cases among front-line health staff indicates this has not proven enough, however, and doctors are increasingly taking to social media to highlight the problem.

One doctor wrote on Twitter to complain that he had to walk more than 20 kilometers to work and that he was given gauze masks, which do not provide sufficient protection.

“Today, when I was on duty, they gave us these masks with holes big enough for a midge to fly through, let alone COVID-19,” the doctor, who identified himself only by the name Bektur, wrote above a picture of the mask in question. “And then they are still surprised that the doctors are getting infected.”

Shortly after tweet was published, the account was deleted. The doctor then appeared in a video uploaded to the internet in which he apologized for spreading “false information.” It was unclear whether he forced by his superior into retracting his earlier statements.

Officials have also generated anger by seeming at times to blame medical staff themselves for falling sick.

Deputy Prime Minister Kubatbek Boronov on April 8 told reporters that some doctors at Osh City Children’s Hospital, which has been temporarily shuttered after emerging as a virus hotspot of particular concern, may have been infected while attending a feast thrown by somebody who had returned from a pilgrimage to Mecca.

“The Health Ministry has informed us that before getting [a positive] result, the doctor noticed no symptoms and continued to go to work. In the end, the worker infected all their colleagues,” Boronov said, alluding to one alleged and unnamed apparent super-spreader.

Sputnik news agency cited government officials as saying that 15 staff at the hospital were found to have the virus.

But Tamila Nurkamilova, an employee at the hospital, lashed out and described Boronov’s remarks as “false accusations” and “slander.” Nurkamilova, who appears to have perceived the remarks as being directed as those like herself, said last week that she had been in serious condition since April 3 and was receiving oxygen at the Osh Regional Hospital.

According to Nurkamilova’s own account, she was in a minibus back in March with two colleagues suffering from high temperatures. Some days later, she too came down with a fever. When she began to experience the potential symptoms of COVID-19, she called the head of her hospital to request a test, but she was not called back, Nurkamilova claims.

“Due to the fact that I began to feel worse, I asked virologists to carry out a test. The following morning, I underwent a PCR-based test and they told me that the results were uncertain,” she said.

More than a dozen of Nurkamilova’s colleagues have lined up behind up her and signed a petition condemning Boronov for his remarks and talked about their bad working conditions.

Lawmaker Aida Kasymaliyeva said that she has received worrying reports from health workers in the Osh region who are forced to travel together in cramped conditions and to eat their meals in treatment facilities. Kasymaliyeva also registered alarm at the state of health of medical workers now battling the virus themselves.

“Every day the condition of doctors grows worse – they are all on ventilators. There are some coughing up blood and who cannot even speak. They have informed me that they are not getting enough oxygen. They say: ‘We are not interested in money. We just want to live. Protect our names and honor,’” Kasymaliyeva said.

Human rights organization Adilet has appealed in a strongly worded letter addressed to the president to press the government to step up its efforts to provide PPE. In their statement, the group calls the attitude of the authorities toward health workers "criminal and treacherous."

“The Health Ministry is forcing staff to work in dangerous conditions under threat of dismissal, and [security services] officials are hounding them for telling the truth. As a result, the doctors themselves are becoming victims of this infection,” Adilet said.

Adilet has also pressed the government to be more transparent in explaining how it is deploying the financial resources it has at its disposal to mount its battle against the coronavirus.

In addition to the in-kind donations, Kyrgyzstan has been allocated $129 million by the International Monetary Fund to handle the crisis. The European Bank for Reconstruction and Development is expected to allocate up to $150 million, with half of that amount coming in the form of a grant. More is anticipated.

“Negotiations are ongoing with the Asian Development Bank for $100 million,” said Deputy Prime Minister Erkin Asradiyev on April 7. “In addition, $9 million from past World Bank projects are still on our books – it has been agreed that this will be used to buy medicines. The World Bank will provide an additional $12 million.”