The new parliament is dominated by figures loyal to the president. 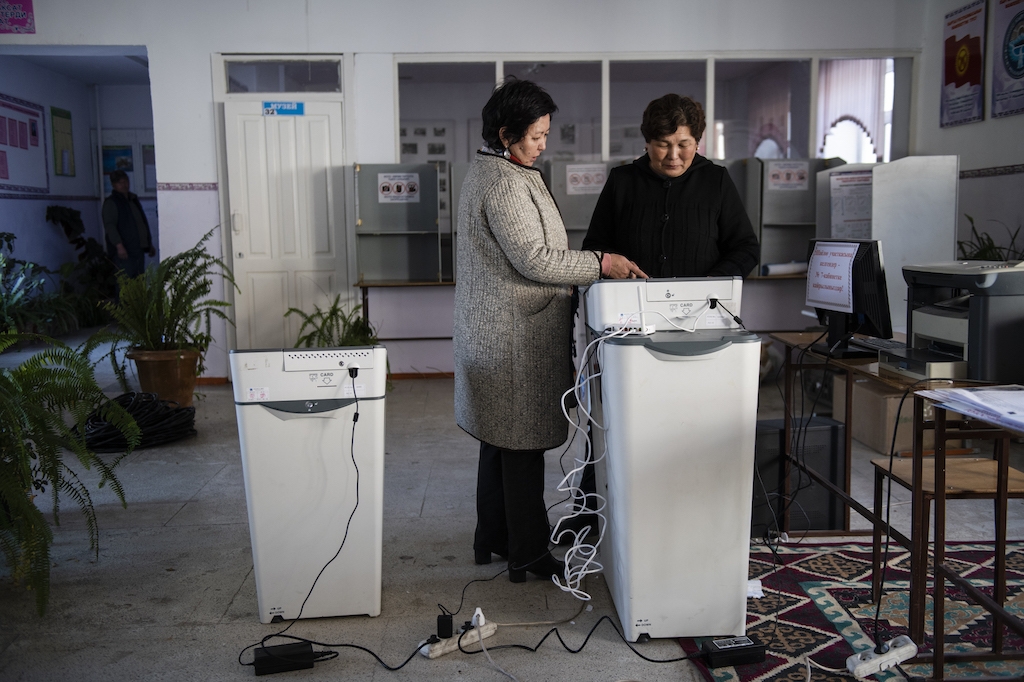 Election officials inspecting voting machines, many of which malfunction on election day, ahead of the vote. (Photos: Danil Usmanov)

The president of Kyrgyzstan started out election day on an uplifting note. The vote to pick a new parliament, he said, would be a decisive moment, “not only for the future of Kyrgyzstan, but for the children too.”

But around midnight on November 28, as yet another vote in the nation’s troubled political history fell prey to mounting suspicions of malfeasance, Sadyr Japarov warned that election officials would “answer with their heads” if it was discovered that there had been any trickery.

In stark contrast to elections in neighboring countries, polls in Kyrgyzstan are rarely fully predictable, but this one may have people scratching their heads for a long time yet.

The purpose of the vote was to pick members for the 90-seat chamber. Of that total, 36 seats were to be decided in single-mandate races. Parties would scoop up the larger share.

Voters were offered a dizzying array of choices. Political formations in Kyrgyz politics are by and large best understood not as indicative of ideological leanings so much as alliances of convenience.

The best-equipped campaign war chests belonged to a group of parties notable for their loyalty to Japarov: Ishenim (Trust), Yntymak (Harmony), and Ata-Jurt Kyrgyzstan. While older faces prevailed among that trio, a fourth party of big-spending Japarov sympathizers, El Umutu, promoted itself as “the party of untarnished and knowledgeable youth.” 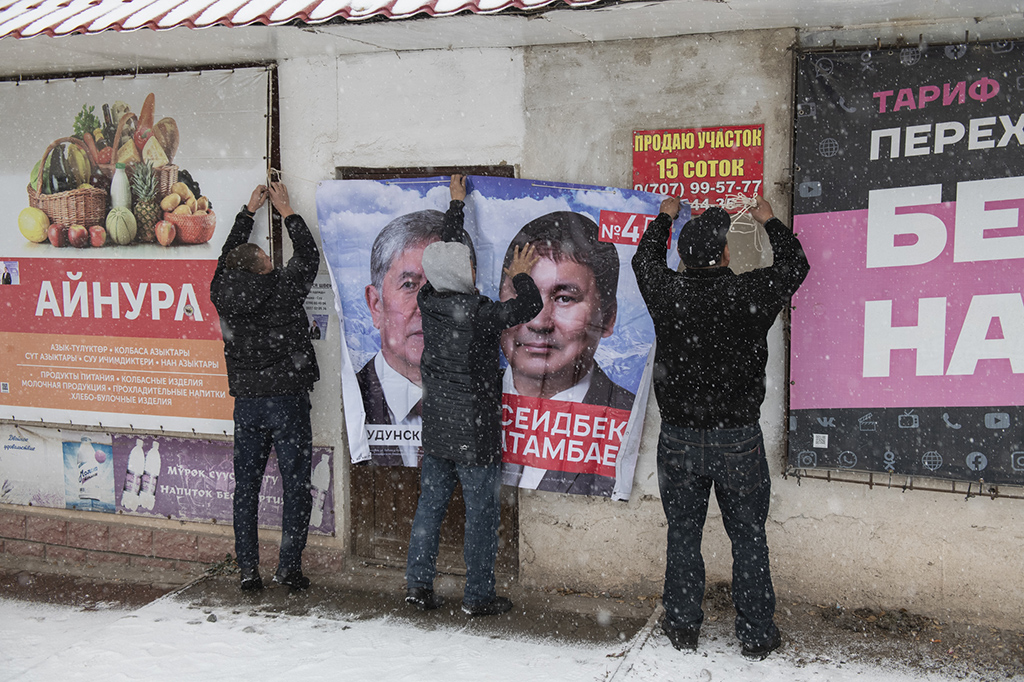 At the other end of the spectrum were Ata-Meken, which allied for the purposes of this vote with the young anti-corruption Reforma party, and the Social Democrats, a successor party to now-imprisoned former president Almazbek Atambayev’s Social Democratic Party.

Also in the mix were Alyans (Alliance), an assortment of politicians yoking one-time members of the ostensibly liberal-leftish Ata-Meken with orphans of the defunct business-friendly Respublika party. Butun Kyrgyzstan and Yiman Nuru have tailored their appeal to a more conservative, traditional values electorate.

That sheer variety and changes to the election law portended the prospect of a rambunctious and diverse legislature. During the abortive elections of October 2020, whose collapse amid rowdy streets protests paved Japarov’s path to power, the threshold for parties to enter parliament was 7 percent. The bar has since been lowered to 5 percent.

As results rolled in after polls closed at 8 p.m., it began to look as though that broad parliament might come to pass. A Eurasianet correspondent at the Bishkek headquarters of El Umutu watched as young party volunteers cheerily congratulated one another on handily surpassing the 8 percent mark. 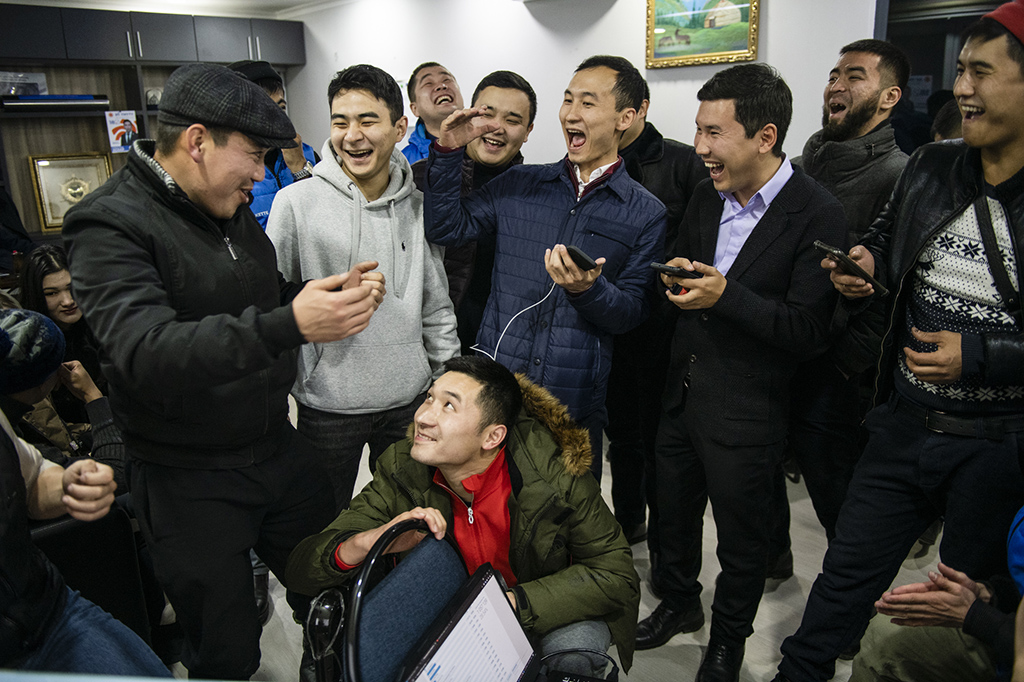 “Going off the work we’ve done and the support that we have received, that was the result we were expecting,” a cheery party chairman, Askar Almaz uulu, told Eurasianet, as a pair of the campaign’s TikTok account handlers lounged nearby.

They may have been similar scenes across town among supporters of Ata-Meken and Social Democrats, both of which were seen making it over the finish line. The pro-Japarov old guard parties led by a long margin, but that was to be expected.

Something was off, though. When the percentage of votes tallied by each party were all totted up, they amounted to a mathematically impossible 150 percent or thereabouts.

Then, just before 9 p.m., the website of the Central Election Commission began glitching. First, the results disappeared. And when they reappeared some minutes later, the situation had transformed dramatically.

All the parties that had seen themselves sailing over that 5 percent mark were suddenly pulled up short. The hardline opposition parties Ata-Meken and Social Democrats were out. So was El Umutu. Eurasianet had departed that latter party’s offices before the bad news was broken.

The adjusted early returns showed only six parties making the cut: Ata-Jurt Kyrgyzstan with 15 seats, followed by Ishenim with 12, Yntymak with nine, Alyans with seven, Butun Kyrgyzstan with six, and Yiman Nuru with five.

It did not take long for the accusations to surface.

“This supposed technical glitch looks an awful lot like cheating,” Kadyr Atambayev, a candidate with the Social Democrats and a son of the former president, ruefully told journalists.

Ata-Meken has already said it wants a re-run.

“There were loud pronouncements from the president and ministers about how the elections would be fair, and that there would be no pressure or fraud,” veteran Ata Meken politician Natalia Nikitenko told Eurasianet at her party’s headquarters in Bishkek. “But watching how the count of votes was done in the electronic system – it was all seen online by journalists and the general public – I cannot but conclude that there was a falsification [of results].”

The single-mandate races threw up some notable results too. The “against all” option beloved of politics-weary cynics won in two districts in Bishkek, which will require a repeat election. Shairbek Tashiyev, a brother of the head of the security services, secured a crushing victory in his native Jalal-Abad district in the south of Kyrgyzstan. The brother of a disgraced former customs officials accused of embezzling hundreds of millions of dollars won with similar ease in the neighboring Kara-Suu district. Outspoken gadfly lawmaker Dastan Bekeshev had no access to the kinds of resources those two wielded, but his creatively run campaign ensured him a dominant triumph in his Bishkek district.

The stink provoked by the phantom adjusted vote is going to linger over the result, but Japarov appears hopeful he can defuse any potential crisis by ordering a scrupulous manual recount.

“I want to address the parties making a fuss and talking about how the election commission server crashed and saying that votes have been stolen: Nobody is going to prevent you from counting the ballots by hand. Recount them by hand,” he wrote on his Facebook account, while intimating that any election officials found responsible of committing any wrongdoing would face serious penalties.

Japarov understands the stakes better than most. He owes his own political fortunes to an October 2020 uprising that led to him being sprung from prison and shuffled into the president’s chair following rowdy protests over allegedly fraudulent elections.

In a case of poacher turned gamekeeper, it is now Japarov and his entourage that warn darkly of the dangers inherent in violent seizures of power. Only two days before the election, in fact, the State Committee for National Security, or GKNB, announced that it had detained 15 people on suspicion of plotting to do that very thing.

“One thousand aggressive young people were being recruited for participation in large protests,” the GKNB said.

The detainees include members of the outgoing parliament and former top officials, the security services said, without specifying names.

Civil society will be conducting its own probes in the coming days. Bishkek-based news website Kloop, which organized a large vote-monitoring exercise, said it had registered 400 rule violations. Many of these consisted of malfunctions in the optical scan voting system that provides the data on which early returns are based. Eurasianet correspondents witnessed several such breakdowns, including one at the polling station where President Japarov cast his ballot. 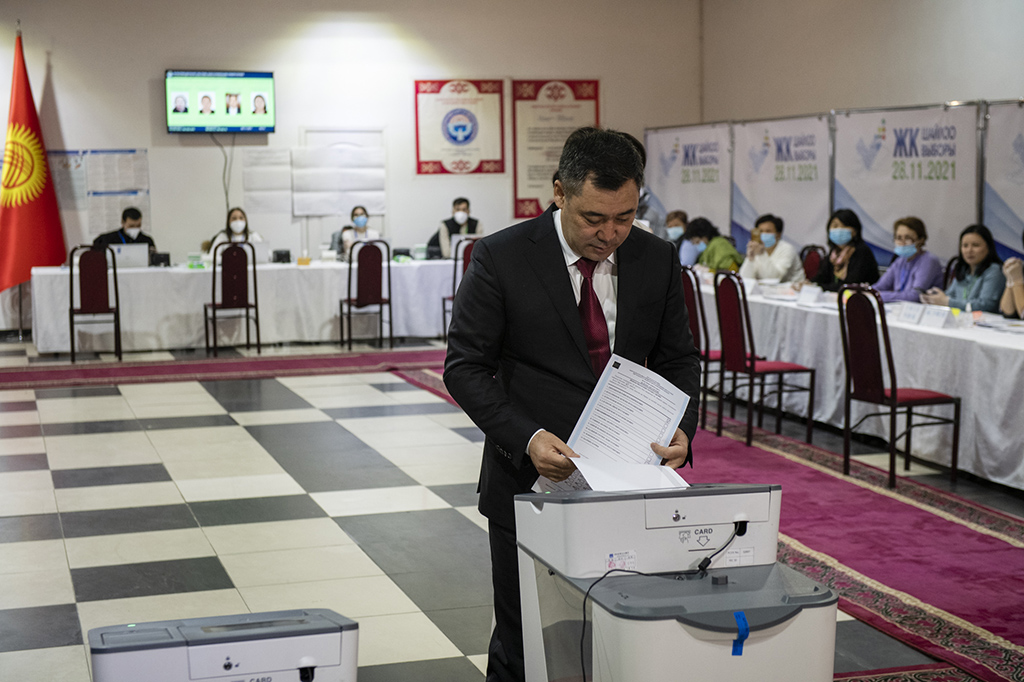 The hand count ordered by Japarov could lead to some significant adjustment to the figures, suggested Ayzirek Almazbekova, who led the Kloop monitoring effort. Attention may be focused on the spoiled ballots, which the head of the elections commission, Nurjan Shaildabekova, said accounted for 9.6 percent of the ballots cast.

These unsettled matters notwithstanding, there is little prospect of a repeat of last year’s turbulence, political analyst Denis Berdakov told Eurasianet. The vanquished parties will likely only manage to muster low-key rallies near their headquarters, he said. What will form afterwards, Berdakov forecast, is a new-look parliament focused more heavily than its predecessor on regional affairs.

“These regional elites will wheedle out preferential treatment for their own regions,” he said. “Parliament will not be oppositional, but it will operate instead in a pragmatic fashion as MPs work on getting money out of the government for spending on their districts.”