The number of eligible voters in Osh has risen by 25 percent since the start of the year. 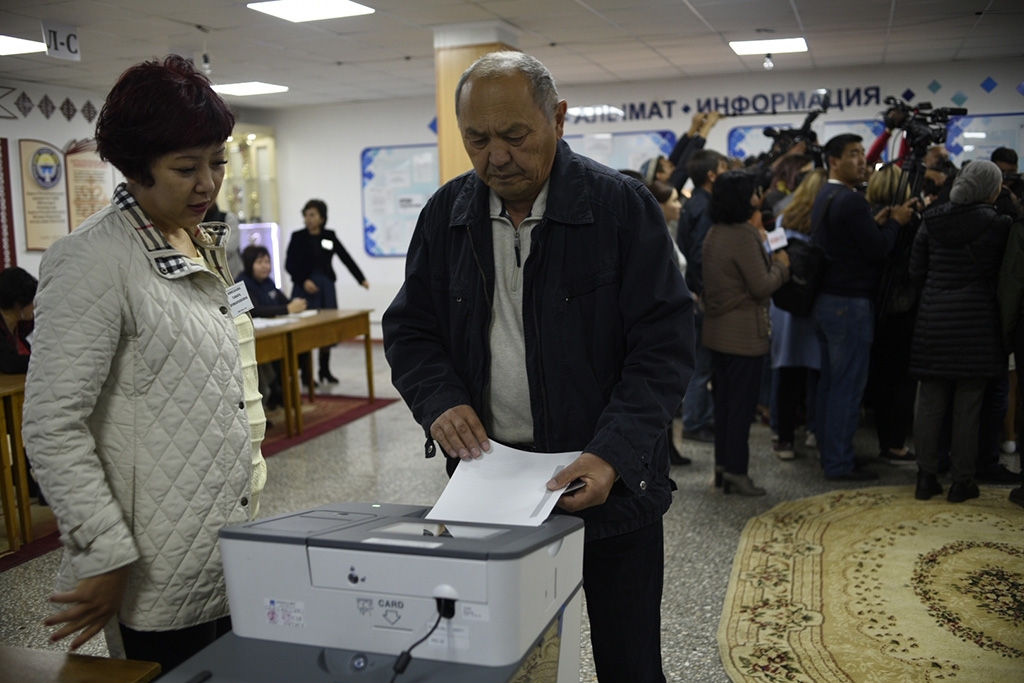 Biting the ballot: An elector casting his vote at the 2017 presidential elections. (Photo: Danil Usmanov)

The number of officially registered residents in three cities in Kyrgyzstan has seen a sharp and suspicious spike only weeks ahead of local elections there.

In the country’s second-largest city, Osh, the quantity of eligible voters has apparently grown by as much as 25 percent, equivalent to almost 36,000 people, over the space of less than two months. Large quantities of people appear to be registered to single addresses.

Some election officials and members of parliament have called for the government to take action against what they suspect may be a major vote-rigging operation, but those pleas may have come too late.

Reporters from RFE/RL’s Kyrgyz service, Radio Azattyk, together with election commission member Atyr Abrakhmanova, earlier this month observed huge lines at a branch of the Population Service Center in the city of Tokmok, which has a population of around 53,000, as people from nearby areas sought to re-register their place of residence. Almost 7,000 people have registered themselves as residents of the city since the start of this year – 17 times as many people did over the same period in 2019.

Ainura Ismanaliyeva, the head of the Tokmok Population Service Center, said the surge in applications began in the new year.

“As you can see for yourself, there are many people,” Ismanaliyeva told Azattyk. “Many people are coming from the Chui region wanting to register in Tokmok. We can do nothing about it because their landlords are coming with them and saying that that is what they want, so we are required to oblige.”

Abrakhmanova said that one day saw a young man holding the passports of two women whom he wanted to register at his property. When she approached the women to ask why they were seeking to move to Tokmok, they refused to answer and left the area, Abrakhmanova said.

“If a person had nothing to hide they would hardly behave in that way. They would instead simply explain their situation,” Abrakhmanova said.

It is a similar story in the city of Karakol, in which, like Osh and Tokmok, city council elections are due to take place on April 12. Since the start of the year, almost 2,800 people have been registered. That is eight times more than over the same period last year.

One student at Osh State University, or OshGU, told Eurasianet, on condition of anonymity, that tutors at the college are actively requesting that undergraduates provide their passports for the purposes of registration. The college is heavily attended by young people not originally from the city, and who are therefore not historically registered as residents.

“Students, of course, do not want any problems and so they hand over their documents. The teachers explain that they too are being pressured by their higher-ups,” the anonymous student said.

The student said that previous experience suggests that the undergraduates being registered as Osh residents will now be pressured to vote for political parties.

“During the presidential elections [in 2017], students were likewise pressured to vote for certain parties. Full use was made of administrative resources,” he said.

The sudden uptick in registrations – and some particularly egregious cases – have been discussed in parliament. Abrakhmanova, of the election commission, has written on social media that one building in Osh had 1,300 people registered at the address. She said it was not possible to divulge information about the landlord at the property in question because of privacy laws.

Another member of the election commission, Kairat Osmonaliyev, said that timely action needed to be taken, if for no other reason than the fact that government regulations stipulate that each person registered as living in a given property should have at least 12 square meters of living space.

In the wake of media reports about anomalous mass registrations, the Population Service Center, a state entity responsible for assisting citizens with their bureaucratic needs, has initiated an investigation. The heads of citizen registration departments in Osh, Karakol and Tokmok have been suspended pending completion of that process.

Dastan Bekeshev, a member of parliament, has suggested that all newly registered residents in the affected town should be required to receive a residency qualification before they are eligible to cast a ballot. For that qualification to be granted, people should need to have to have lived in a given location for a period of at least six months, he said.

It does not seem probable that any rule changes will be implemented in time for the April vote, however.

Another area of concern is the number of reports of outright vote-buying. The OshGU student who spoke to Bishkek-based news website Kloop about registrations said he had been promised 1,000 som ($14) in exchange for his ballot. Another student who spoke to Kloop said he had been offered 500 som to cast his ballot for a candidate from the Bir Bol party.

Police in Osh say they have already initiated a criminal investigation into allegations of vote-buying. In theory, candidates found to have bought votes could face sanctions ranging from loss of their mandate to sentences of up to two-and-a-half years in prison.