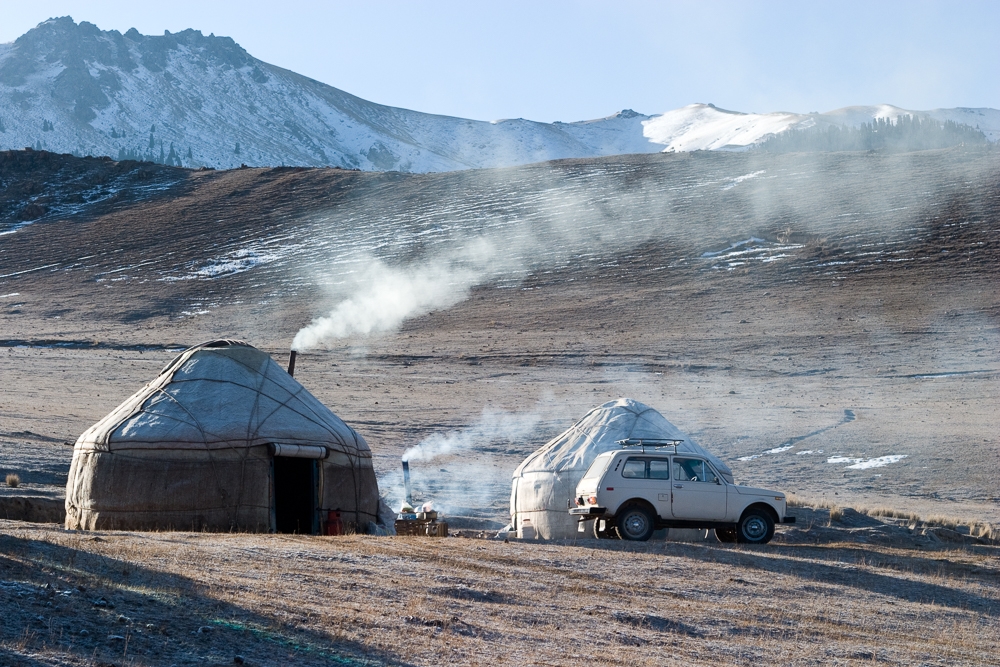 Portable felt yurts dot the Kyrgyz landscape from spring to fall. In winter most families return to houses in villages. (All photos David Trilling) 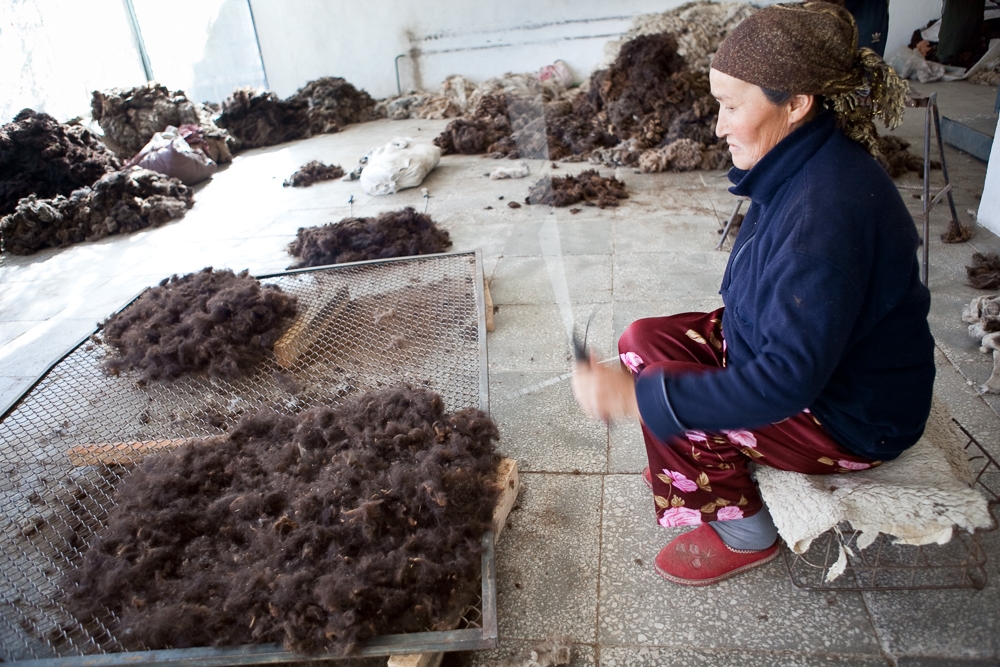 Agitation and rubbing together of the wool causes little hooks and scales on the wool fibers to link together and form felt. 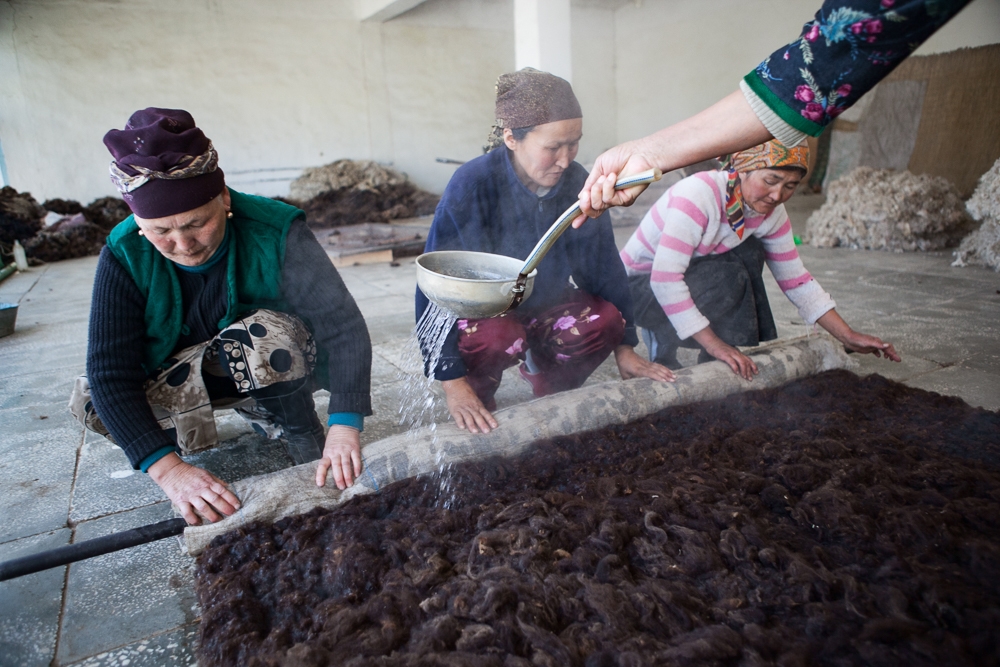 After the wool is sorted it is subjected to boiling water and rolled tightly into a coil. An hour later, the felt sheets are hung to dry. 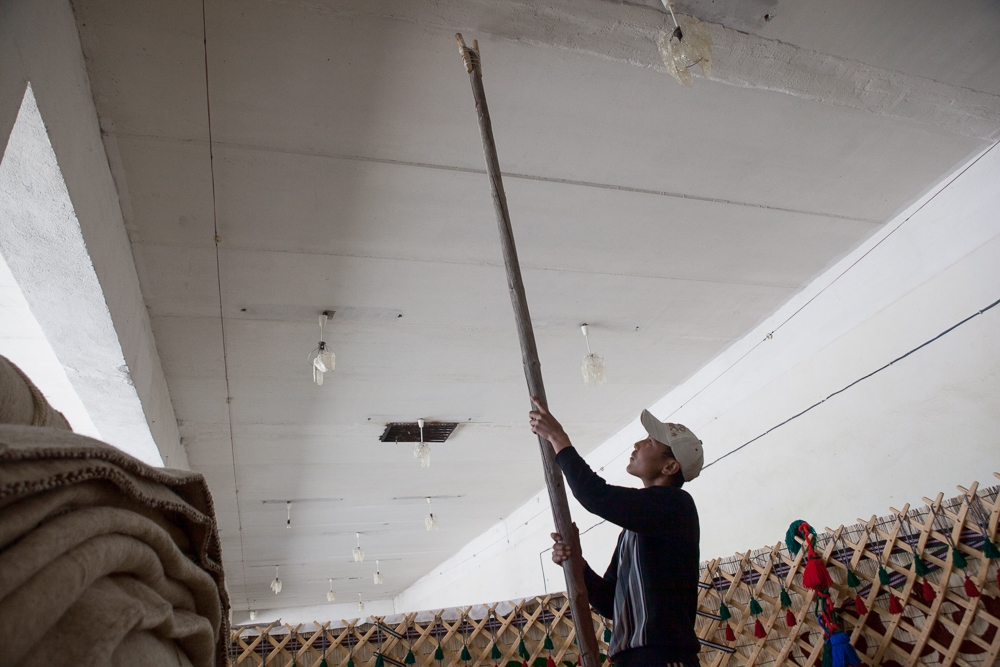 Jinak Kasmalkulov demonstrates how to assemble a traditional felt yurt inside the abandoned shop his family uses as a yurt factory. He, his mother and a group of villagers make approximately six yurts per year in the former general store. 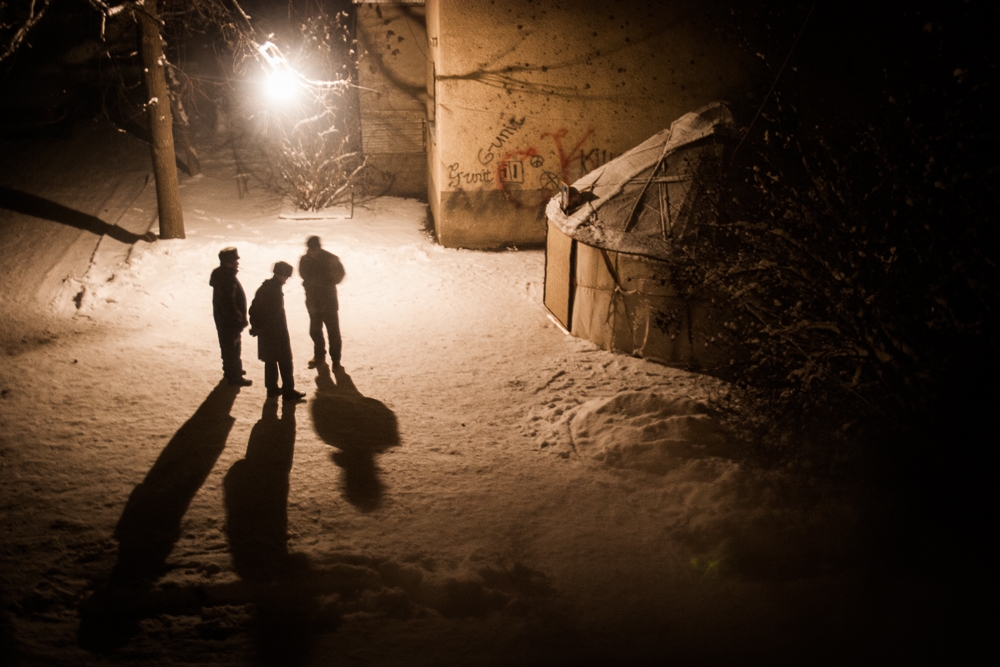 A funeral in Bishkek last winter was held in a yurt placed between large apartment blocks. For approximately $100, a family can hire a yurt for special events. The fee includes set up and three days' rental. 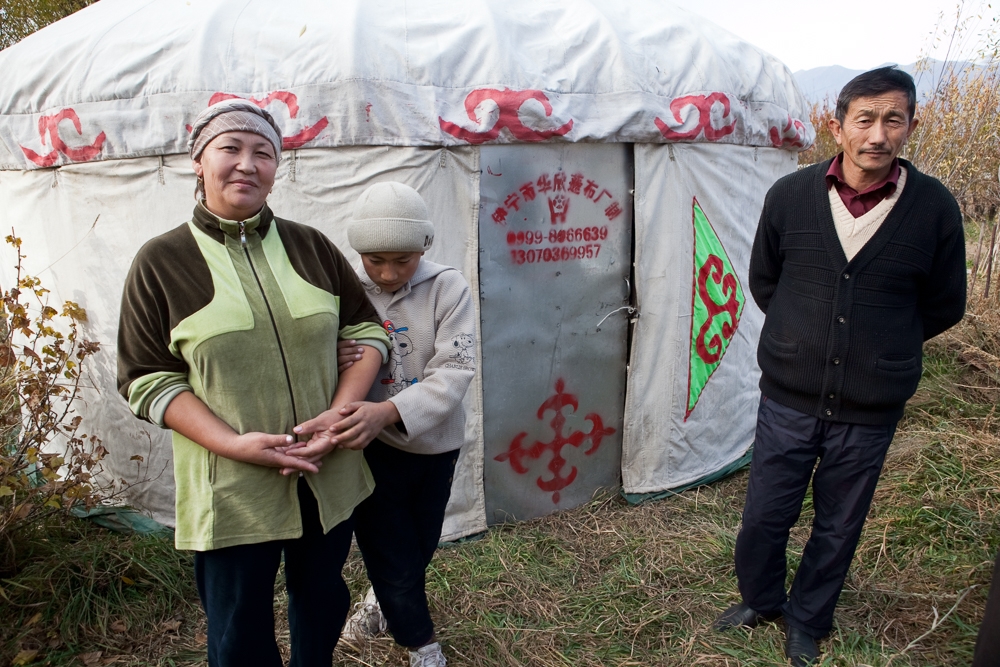 Anara Bolotova with her husband Marat Moldokanov and son in front of a Chinese yurt they imported. The yurt has a metal door and takes only 20 minutes to assemble, Bolotova says. 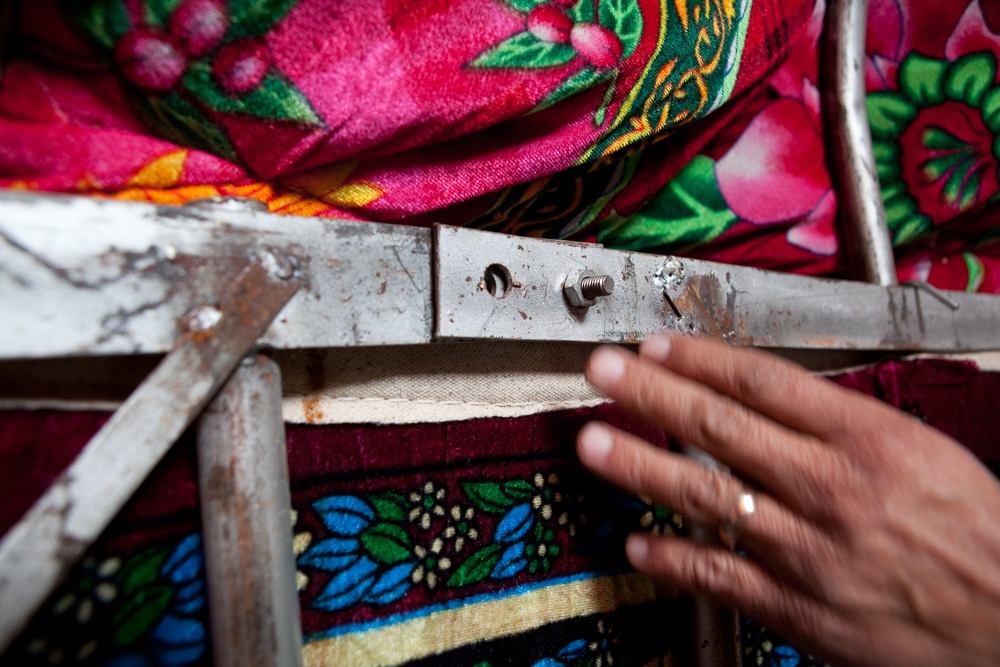 The Chinese-made yurts have a metal frame that is easier to assemble. 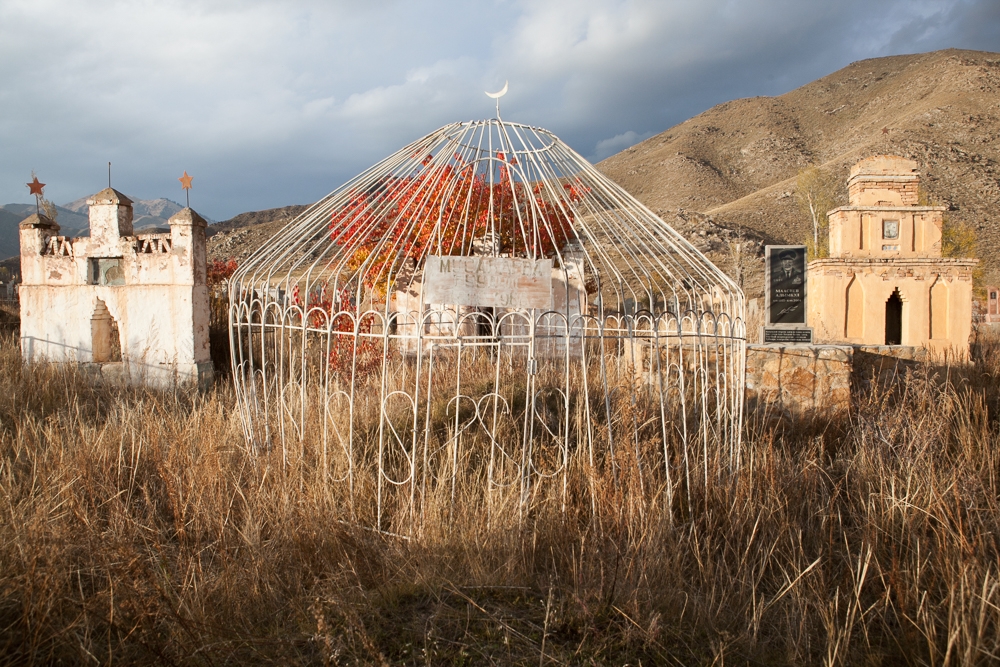 A cemetery on the north shore of Lake Issyk-Kul.
prev
next

Yurts are a quintessential element in Kyrgyzstan’s national identity. Not only are the felt tents emblematic of Kyrgyzstan’s nomadic past, they lend their shape to cemeteries, souvenirs and World War II monuments, and help frame national consciousness.

"Every Kyrgyz family should have a yurt. If they don't have one, they're not Kyrgyz," says Jinak Kasmalkulov. Jinak, his mother and family friends make about six yurts a year as part of their full-time business occupying a rural Soviet-era general store in the village of Kara-Koo on the southern shore of Lake Issyk Kul.

Kasmalkulov believes nothing should replace his felt and wood yurts.

But at the far end of the lake, Anara Bolotova for the past two years has been importing synthetic cloth and metal yurts manufactured across the border in China's western Xinjiang Province. She sells up to 15 a year and says business is good.

Red spray-painted characters adorn the tin doors of her yurts. They are part of a deluge of inexpensive imports from China. According to the Kyrgyz Ministry of Economic Regulation, Chinese imports exceeded $728 million in 2008, up from $78 million in 2003, an increase of more than 800 percent. By comparison, Kyrgyz exports to China reached only $44 million in 2008. In a grievance echoing around the world, many Kyrgyz these days complain their country is being overrun with cheap and inferior Chinese goods.

Even so, many Kyrgyz admit Chinese-manufactured yurts are easier to assemble, and they are growing in popularity.

"A Kyrgyz yurt requires very intense care," explained Bolotova, speaking in her home in Toktoyan village. "It requires constant drying and taking care of the felt to protect it from bugs. The wooden frame should be stored carefully so it doesn't get warped. Using a Chinese yurt is very comfortable for me because I just put it in a dry place and take it out when I need to put it up. For me, it doesn't really matter where it's made. I buy whatever is more comfortable."

"It takes two people 20 minutes to put one up. It's much easier," she added.

The Chinese yurts provide the urban middle class with an easy means to stay in touch with cultural tradition. "Before, Kyrgyz people used yurts for funerals. Now, people see that it is nice to use yurts for weddings, large family reunion parties, for having guests," said Bolotova.

Traditional yurts are expensive. For an average model, the felt alone requires the wool of 100 sheep. Felting the wool and building a wooden frame can take 15 people over two months and cost over $5,000. Because sedentary families are unlikely to purchase the costly Kyrgyz yurt simply for special occasions, the cheaper Chinese yurts have broader appeal, Bolotova reasoned.

Despite their advantages, Kasmalkulov does not see the Chinese imports as a threat to his family business. "They don't have a future. People will not like them much because they don't last long. Our yurts are like medicine to people, and people value that a lot," said Kasmalkulov, adding that only city dwellers or foreigners tend to buy a Chinese yurt.

He says the imported yurts will only last two or three seasons, while the traditionally crafted felt yurts can last generations, if cared for properly.

Bolotova admitted that the Chinese yurts have not faced the trials of time, but she expressed optimism that they would hold up. "We've had one Chinese yurt [...] for nine years now. It depends on how you keep it and look after it. If you keep it well, it will last long," she asserts. "The people we buy it from make it very well, so we don't get embarrassed when we sell it here."

These days, the enduring test may be in urban perceptions. For Damira Sakieva who rents traditional yurts for family events and parties in Bishkek, a foreign-made yurt is an anathema. Ninety-five percent of her dial-a-yurt business is funerals. "I don't think our clients would be happy to hear that our services are held in Chinese yurts. When they call us, they want information about our yurts," she says. "I don't think that it is time yet for Chinese yurts. When a close person dies, family members want to give them a worthy burial. They want to bury them in a real Kyrgyz yurt."

For approximately $100, Sakieva will set up a yurt between Bishkek apartment blocks for the customary three-day funeral service. "People want yurts for funerals because this has been a tradition for centuries. Ours are Kyrgyz felt yurts," she explains.

Many traditionalists, however, fear China's export machine. Bolotova's comments concerning the next generation of entrepreneurs would seem to feed these concerns. "Our daughter studies Chinese in Bishkek because we see a lot of business is now conducted in Chinese," she said.