Kyrgyzstan, Tajikistan border tensions simmer amid a flurry of accusations

Both sides are accusing one another of secretly returning troops and weapons to the contested border. 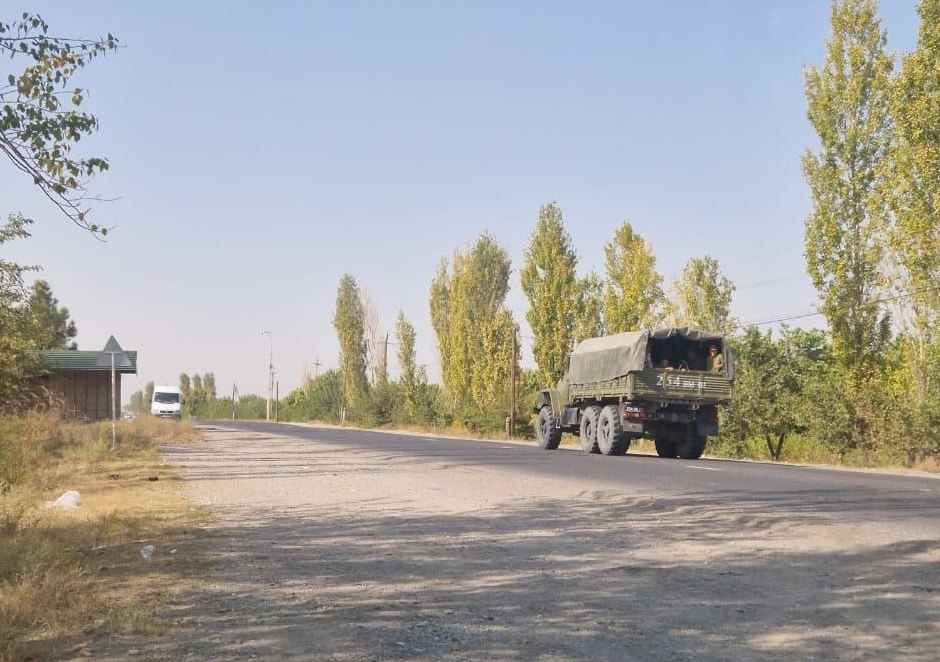 An image that Kyrgyzstan says shows Tajik troops being moved to an area of the contested border. (Photo: Kyrgyzstan GKNB)

Kyrgyzstan and Tajikistan have once again traded accusations of covertly mustering their armed forces along a contested section of their shared border, stirring worries that a fresh bout of unrest may be looming.

In a statement on October 19, the Tajik security services accused Kyrgyzstan of deploying military equipment and digging trenches along the border, as well as repeatedly violating Tajikistan’s airspace with unmanned drones.

“[This] is a clear confirmation of the Kyrgyz side’s malicious plans,” the Tajik State Committee for National Security, or GKNB, said in the statement.

Kyrgyzstan’s security services, also known as the GKNB, fired back with their own statement, expressing bewilderment at the accusations made by Tajikistan.

Tajik border forces are “deliberately disseminating distorted information in an attempt to provoke the population on the border into committing illegal actions,” the Kyrgyz GKNB said.

It is Tajik armed forces that have been installing firing positions, digging trenches across the entire perimeter of the border, and making incursions with unmanned aerial vehicles, Kyrgyz security services said.

“Since September 25, 2022, there have been more than 10 instances of [Tajik] drones conducting reconnaissance activities and violating the airspace of the Kyrgyz Republic,” they said.

More than 100 people were killed in mid-September when a clash between border patrols in an isolated mountain area escalated into what both sides later went on to claim were broad, premeditated military assaults by one against the other. Civilians bore the brunt of the violence. Most available evidence strongly suggests non-combatants in Kyrgyzstan sustained a particularly heavy toll.

The uneasy peace that has prevailed since that time is underpinned by a September 25 protocol that committed Kyrgyz and Tajik troops to vacating four border posts apiece in the areas where clashes took place. The parties also agreed to withdraw heavy military equipment from the border and install surveillance cameras in particularly sensitive locations so as to minimize the likelihood of one or other side initiating hostilities.

Kyrgyzstan has furthermore pleaded with the Russia-led Collective Security Treaty Organization, a defense bloc of which Tajikistan is also a member, to station troops along the border to help prevent a repeat occurrence of violence.

"I recently met with CSTO Secretary General Stanislav Zas. I told him that there would be no peace between Kyrgyzstan and Tajikistan. Why? Because the Kyrgyz have their own truth, and the Tajiks have their own. Until an arbitrator comes between us, say a small contingent from the CSTO, peace will not be achieved,” Kyrgyz Defense Minister Baktybek Bekbolotov told reporters on October 19.

“He said: ‘Maybe you could assist, since our two countries are finding it difficult to resolve things and everything ends in conflict,’” the secretary of Kyrgyzstan’s security council, Marat Imankulov, said, citing remarks purportedly made by Japarov to Putin.

The dueling statements released on October 19 highlight that mutual suspicion is deep and intense.

Tajikistan has accused Kyrgyz civilians of also getting involved in what it described as constant assaults on people attempting to reach the Tajik enclave of Vorukh, which is separated from the mainland by Kyrgyz territory.

“Residents of the village of Ak-Sai, which has a population of 3,500, have for an extended period been systematically attacking Tajik citizens and their vehicles, blocking the only road to Vorukh and thereby restricting the movement of 45,000 Tajik civilians … infringing their rights and isolating them from the outside world,” the Tajik GKNB stated.

The GKNB produced several images it said proved that Tajik homes and cars have been coming under attack.

Kyrgyz civilians in Ak-Sai came in for particularly brutal treatment during September’s unrest. Dozens of homes were destroyed by rampaging mobs. Eyewitnesses reported seeing uniformed Tajik men among the attackers.

The Kyrgyz security services have responded with their own set of allegations. One was the claim that mosques in Tajikistan are being used for training mercenaries and storing weapons and ammunition. Kyrgyz officials also say that Tajik armed groups are using ambulances to transport weapons.

“The border service of the State Committee for National Security of Kyrgyzstan notes with regret that despite the signing of the protocol and [an agreement on] measures to stabilize the situation in the border areas, the Tajik side continues to pursue activities that could serve as a catalyst for another border conflict,” the security services said.

The apparent increased use of drones by both armed forces is another signal of the relentless escalation in the standoff between Kyrgyzstan and Tajikistan.

Clashes in earlier years have largely involved the use of light weapons, mortars and portable rocket launchers. In September’s fighting, it appears that Tajikistan made use of multiple rocket launchers, while both sides deployed heavy armored vehicles.

In another precedent, Kyrgyzstan’s armed forces reportedly struck targets within Tajikistan by means of a Turkish-manufactured Bayraktar drone of the type that has been used to great effect by Ukrainian forces resisting the Russian invasion.

On October 12, the head of the Kyrgyz GKNB, Kamchybek Tashiyev, uploaded a photo to his Facebook page showing himself posing next to a Bayraktar drone, the full Turkish name of which is Bayraktar Akinci.

“The Akinci is ours!” Tashiyev wrote in a message with the photo. “Thank you to our brother nation.”

The post has widely been interpreted as an indication that Kyrgyzstan may have acquired more of the drones from Turkey since September’s troubles.

In more circumstantial evidence that Kyrgyzstan is seeking to build a broader fleet of drones, unattributed footage circulated online this week displaying an armed drone purportedly designed and built in Kyrgyzstan. Sections of the footage show what appear to be Kyrgyz soldiers handling the aircraft. Nothing certain is known about the drone other than its name – SAARA-02.

Tajikistan likewise has drones at its disposal.

In May, the chief of staff of Iran’s armed forces, Major-General Mohammad Bagheri, traveled to the Tajik capital, Dushanbe, to attend the opening of a facility for the production of Iranian-designed Ababil-2 tactical drones. The unmanned aerial vehicle is described by U.S. military sources as a single-engine, long-range, low-technology drone that is mainly used as a target drone for training anti-aircraft defense crews, but which can also be deployed for “rudimentary surveillance capabilities” and as “a loitering munition.”

Tajikistan is also being supplied with $20 million worth of Puma reconnaissance drones by the U.S. government, although the expectation is that those aircraft are to be used for patrolling the border with Afghanistan.