Tajik authorities have only glancingly acknowledged the crisis. 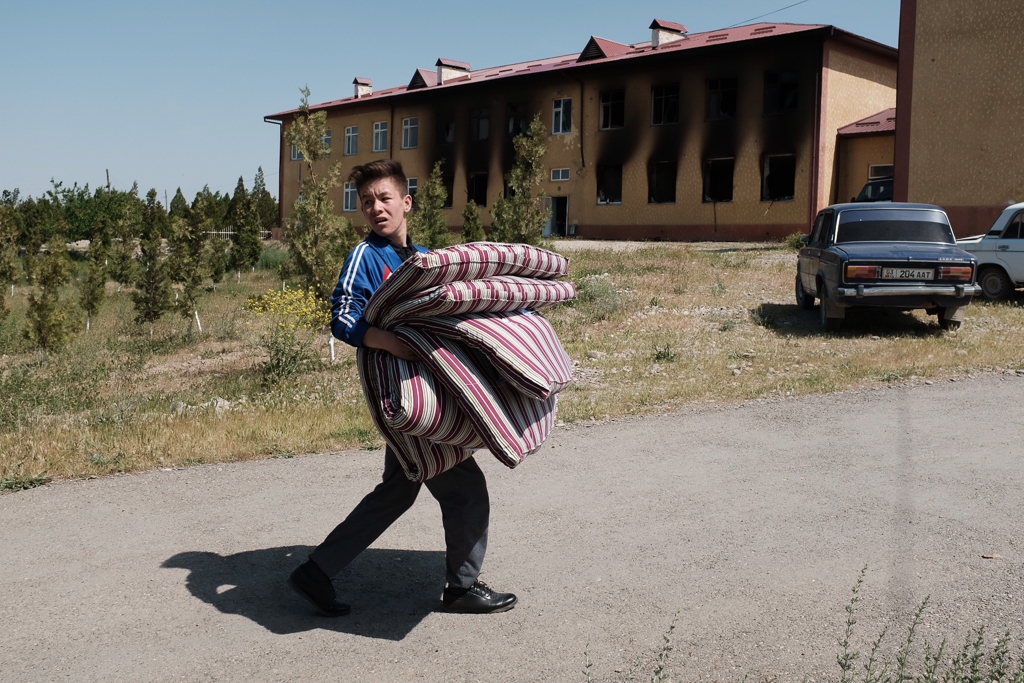 A man carries mattresses outside a burned school in Maksat. (photos by Danil Usmanov)

After days of fighting along the border of Kyrgyzstan and Tajikistan, large swathes of villages on the Kyrgyz side are scenes of devastation. The toll on the Tajik side has been much lighter, but communities there too have felt the brunt of clashes.

When Eurasianet visited the Kyrgyz border settlement of Maksat on May 2, spent bullet cartridges were scattered on the roads and the smell of burning still lingered in the air. Fire-gutted houses were arrayed in a checkerboard pattern, alternating with intact buildings.

The highway running by this area – about 70 kilometers west of where the first clashes broke out on April 28 in a disagreement over a river water sluice – is an anomaly. On one side, it is Kyrgyzstan. Cross the road and you are in Tajikistan. No border controls. 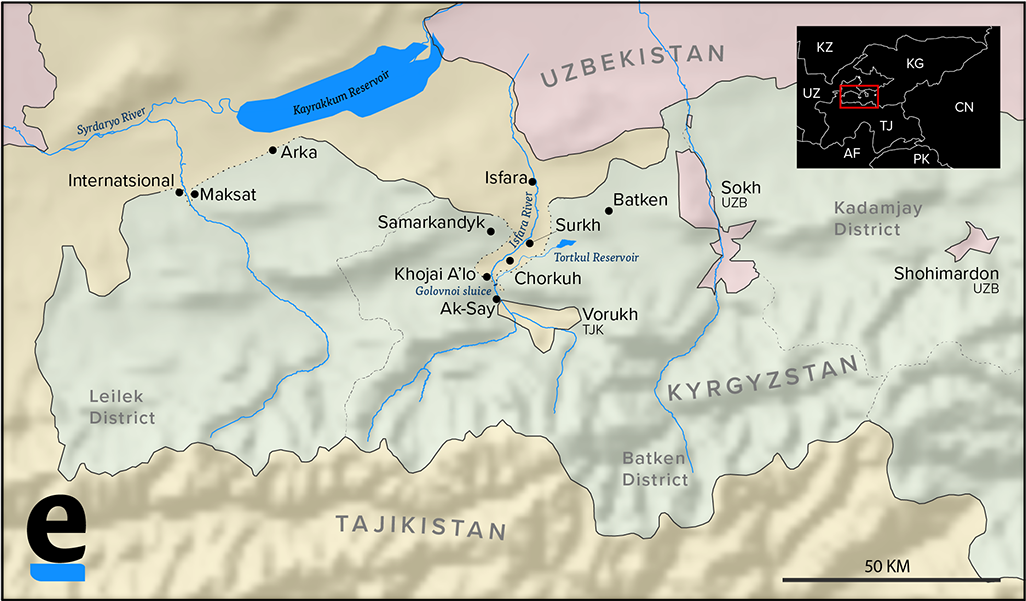 Maksat resident Nazymbai Kabyrayev, 45, lives right on the highway. Just a week ago, small children and a dog were running around Kabyrayev 's home.

There are two buildings on his 3,000 square meters of land: one older one that belonged to his parents, and a new one he built himself seven years ago. Only the foundations of the old one remain. The new building is still standing, but it has been emptied of all its valuables and had its windows smashed. Several rooms are charred.

Kabyrayev says that Tajiks took everything valuable from his house, including three televisions, a washing machine, a water heater and a computer.

“There is nothing else left. They took away all the valuable and expensive things. There was an Opel car, but it is not there anymore. I had four rams out in the yard, but they’re gone too,” he said.

Onlookers passing by entered the house, took a look around as if it were a museum, and offered words of sympathy. 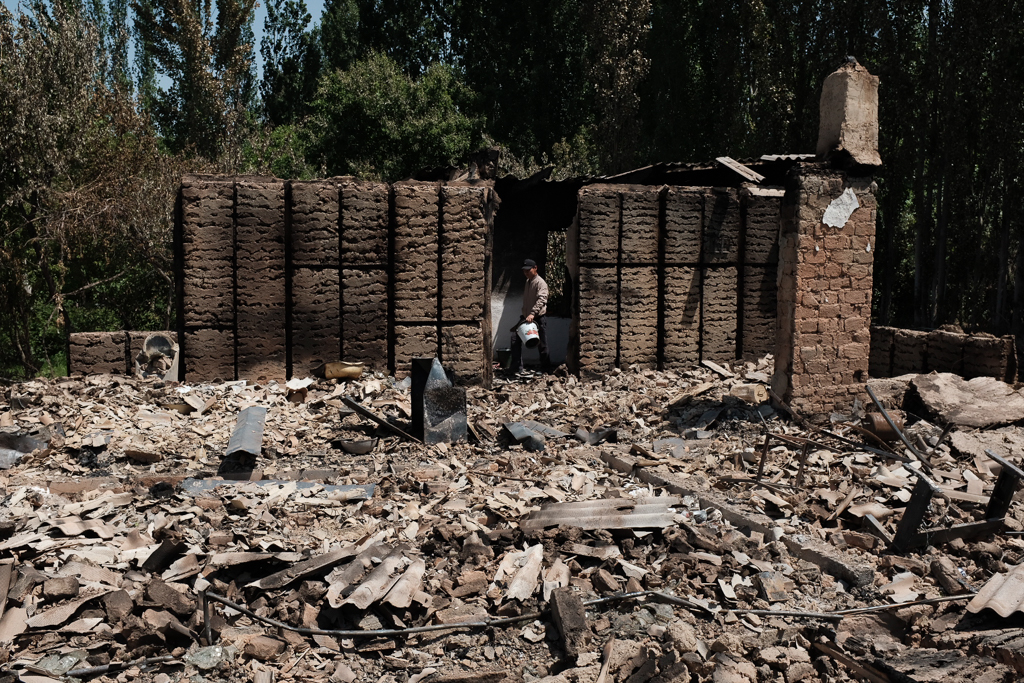 Kabyrayev says he built his home through his hard work, toiling at a construction site in Russia. He returned four years ago, once the building was done.

“I have worked for this house all my life. Slowly, year after year, I saved and built. One year, I poured the foundation. Another, I erected the walls,” he said.

Seven other members of an extended family lived in the same home. Now, they are scattered across the homes of other relatives.

He assesses his damages at around $90,000. If the government can’t cover that cost, then his relatives will do their bit, Kabyrayev said.

Local government administrators had already visited and put Kabyrayev on their list of victims of the pillaging. But he said that they initially only took down his name. Only after he kicked up a fuss did they audit his losses, he said.

Sitting on a topchan, a remaining bit of furniture, Kabyrayev lit a cigarette and mused in resignation.

“What’s to be done?” he said. “Everybody must submit to God’s will.”

For others, the burned homes are matter of deeper despair. Fellow villager Rakhat Esenova raked through her charred belongings with tears in her eyes.

“I don’t have a home anymore. Our Tajik brothers left us with nothing. Who will answer for all this? I don’t know. Why did they do this to us? We did nothing bad to the Tajiks,” Esenova said, sobbing.

It was the same story. All the furniture and appliances were gone. Even the supplies of rice and cooking oil stored in the cellar had been taken. Only the smoldering foundations remained. Among the debris were burned utensils and shell casings – a sign that soldiers had been around. 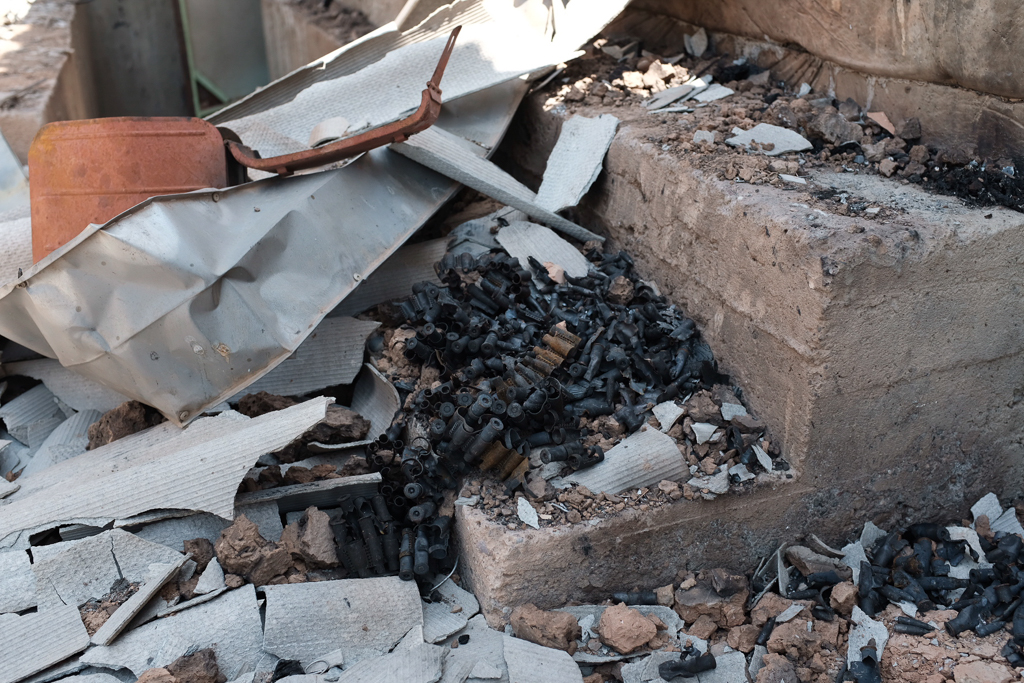 Tajikistan acknowledges only that its citizens participated in looting and arson. But Khurshed Mukhammadzoda, the head of the Tajikistan Interior Ministry’s special forces department, denied that any government forces were involved.

“This incident is the result of the bitterness that has built up within people over many years. These are people who live in border areas. By doing this, they were probably just venting their emotions,” he told Eurasianet.

According to early estimates by Kyrgyzstan’s Emergency Situations Ministry, more than 100 houses across a handful of villages were damaged or destroyed. Two schools got the same treatment. At least 36 people, including three soldiers, have died as a result of the unrest.

The clashes also affected private enterprise. In Arka, about half an hour’s drive east of Maksat, 20 businesses were destroyed. They included modest food stalls, hairdressing salons, and other larger stores too. 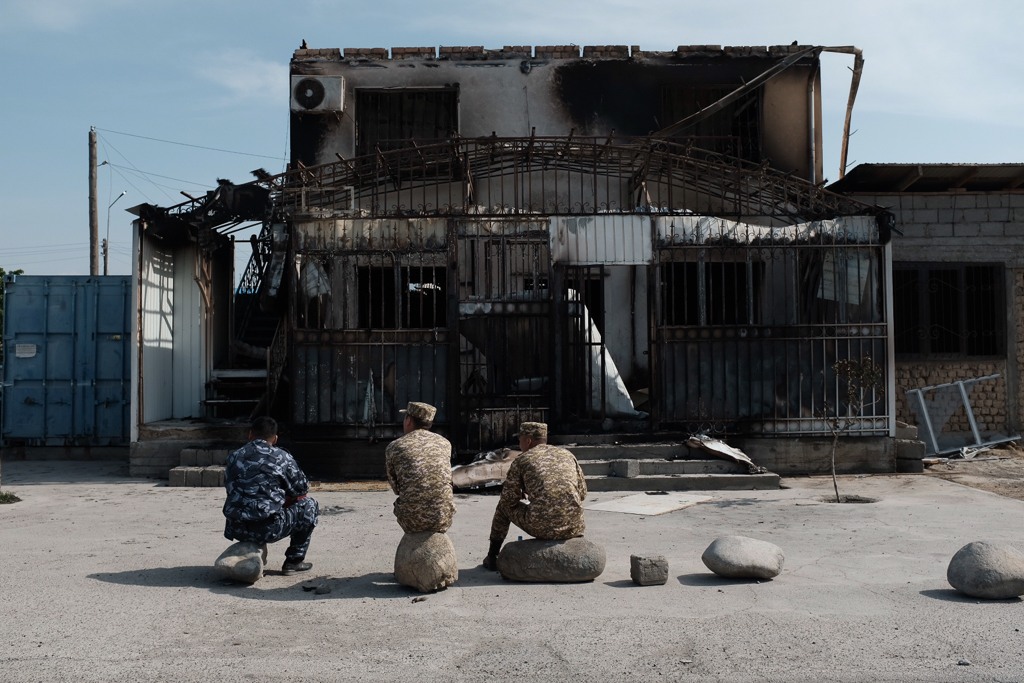 Akmar Mirsaitov lost an entire gas station and a car wash. A building he leased to a microcredit bank was damaged as well. With these businesses he supported his wife and five daughters and provided for five employees. Fully 10 gas stations owned by Kyrgyz businesspeople have been destroyed.

For three nights, Mirsaitov and hundreds of others from his village took refuge in the mountains, looking down from a height as they watched one business after another go up in flames. Bitter humor kept them going.

“It was very upsetting, but we kept our spirits up. We joked, we didn’t cry. But we couldn’t go down to put the fires out or they might have shot us. We joked: ‘Oh look that thing is burning now, and now that other one is burning, the gas station, a house.’ We could see it all,” Mirsaitov said.

Spirits are buoyed by the idea of reconstruction.

“We will repair everything, so long as the government helps,” Mirsaitov said.

Kamchybek Tashiyev, the head of the State Committee for National Security, or GKNB, said on May 2 that the authorities would provide all help needed to rebuild. But he indicated that no compensation would be sought from Tajikistan – a statement that has attracted some grumbling from online critics.

“We will not take any help from Tajikistan. We, on our own, will in short order build burnt-out houses back up and provide for those in need. There are some who have lost cars and livestock. We plan to restore those things as soon as possible,” Tashiyev said.

He was unable to offer a specific timeframe though. Maybe one month, maybe two. Reconstruction might drag on through to September, he said.

In the meantime, displaced people are living in tents provided by the Emergency Situations Ministry or in the homes of relatives or host families. The ministry said people whose homes are still intact would be able to return by May 3.

Civil society has sprung into action too. A burned-out school in Maksat has been turned into a warehouse holding mattresses, sacks of potatoes and onions, jars of pickles and clothes donated by the public. The Emergency Situations Ministry said that the aid began arriving on May 1 and that they already have 290 tons of food and equipment to distribute.

Some are bringing material in without government involvement as they are wary of donations being purloined.

“We have collected about two trucks full of material,” one volunteer from the city of Jalal-Abad told Eurasianet on condition of anonymity. “We decided to see with our own eyes what needs to be sent where, which people need help.”

Tajikistan’s authorities have only glancingly acknowledged the entire crisis. After days of total silence, the central government issued a bulletin on May 3: 14 homes destroyed entirely, 15,000 people evacuated. RFE/RL’s Tajik service has counted at least 16 fatalities. And officials in the northern Sughd region have belatedly indicated that help would be provided for people whose homes had been damaged or destroyed in attacks.

The slack had before now instead been picked up civil society.

Collection boxes have been placed at the entrance to mosques to help raise funds for families who lost their homes. And businesses have also pledged support.

One entrepreneur from Dushanbe told Eurasianet on condition of anonymity, because he does not want to publicize his philanthropy, that he is sending consignments of flour, cooking oil and other groceries to families who have suffered financially during the crisis.

“It is our duty to help each other in difficult times,” he said.

Other small enterprises in Isfara, a mid-sized market town a short distance from the villages on the way to the Tajik enclave of Vorukh where the disturbances first began, are providing food parcels for people breaking the fast during the ongoing month of Ramadan.

Many of the displaced are staying with relatives.

A resident of the village of Khoji A’lo who introduced himself as Abror said that his wife and their children and staying at her parents' house. He is spending the nights at a local mosque.

“It is the third day that I am walking around [in the clothes] that I was able to rescue from home. We sent the women away already on the morning of [April] 29. Toward lunchtime that day this tragedy happened. We weren’t able to save our belongings,” Arbor said.

“What do you think? When will a commission begin to assess our losses? And who will compensate us?” he asked visiting journalists.