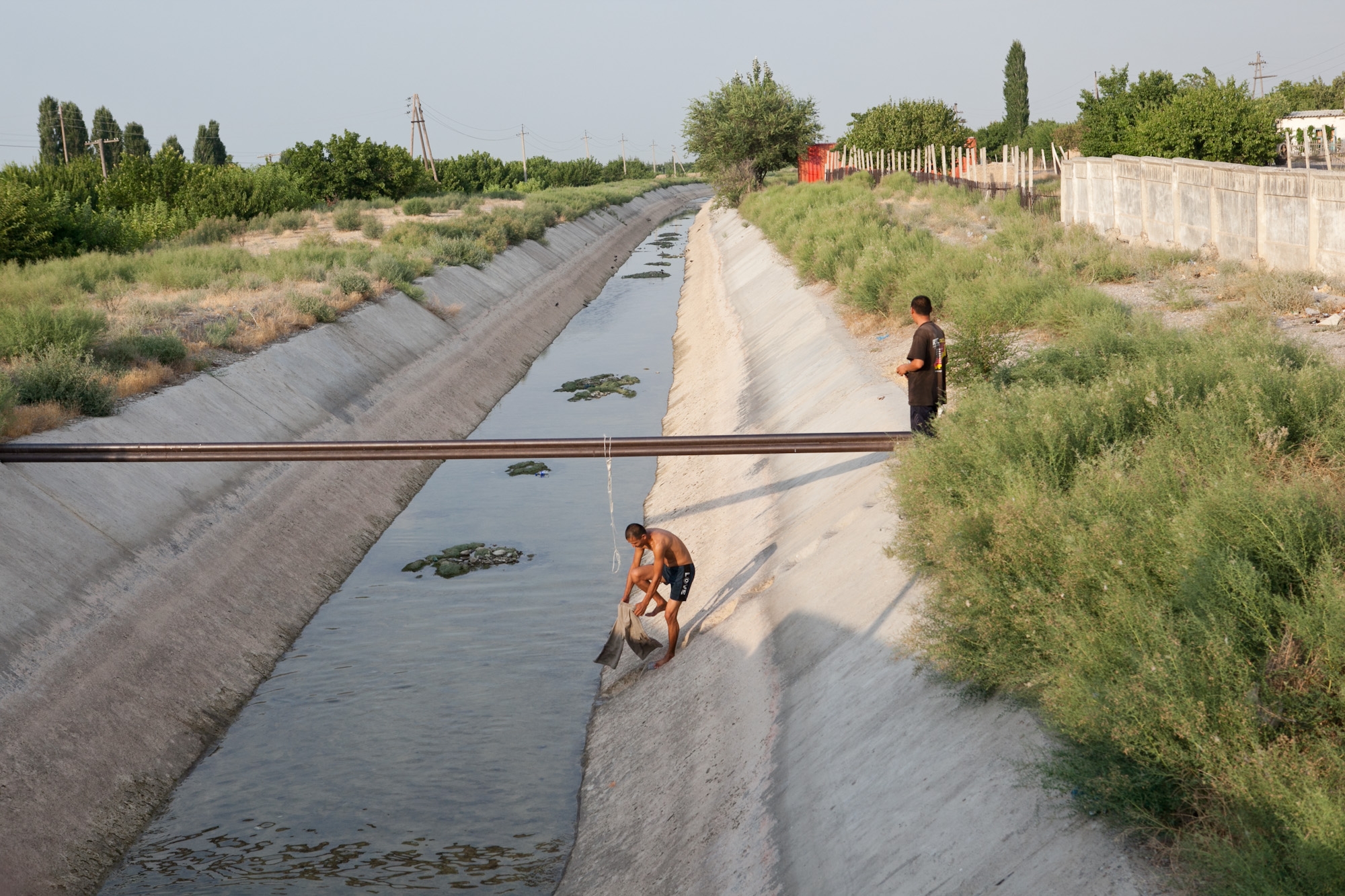 Men bathe in a canal near Arka, Kyrgyzstan. Locals say the canal marks the border with Tajikistan. (Photo: David Trilling)

Ask an ethnic Kyrgyz in the cramped village of Tash-Tumshuk what country he lives in and he will reply confidently, “Kyrgyzstan.” Shout over the mud-brick fence to the ethnic Tajik next door and he will, with equal conviction, say he lives in Tajikistan, in a village called Hojа Alo.

In this fractured rural community in the fertile Fergana Valley, where the border has been disputed for more than 20 years, the homes of Kyrgyz and Tajiks stand in a checkerboard pattern and citizenship almost always coincides with ethnicity.

Thousands of families now live in territory disputed by Kyrgyzstan and Tajikistan, the two poorest former Soviet states. In some places, Kyrgyz and Tajik homes are jumbled together; in others, “mono-ethnic” communities are linked by contested roads or waterways. As this uncertainty enters its third decade, problems have piled up – land and water shortages, economic hardship, crumbling infrastructure, poor governance, nationalism. Not surprisingly, interethnic tension is simmering.

“Our children play together, we go to each other’s parties. On the surface, everything looks good. But underneath, it is not so good,” Sharof Tuychiev, a 79-year-old Hoja Alo resident, said of Kyrgyz-Tajik relations.

When problems arise, villagers turn to their respective governments. But in remote border communities, getting officials to ensure basic legal protections or provide public services is even harder than elsewhere, since responsibility is often unclear. Tuychiev has lobbied officials for months to investigate the nighttime destruction of his fence, to no avail. A few kilometers up the road, a dangerous intersection has no stop signs.

Most often, residents and aid workers say, conflicts fall into three sometimes overlapping categories: disputes over land and water; fistfights among young men; and friction between residents and soldiers or police officers.

“With young people there is constant conflict. It’s so constant we don’t even consider it a conflict,” said Ismailov of Tash-Tumshuk. “But in the summer, when there’s not enough water for irrigation, that’s when adults start to quarrel.”

In one case, relayed by an aid worker, the “checkerboard” village of Kok-Tash/Somonion had no drinking water, so residents had to walk to a river through pockets of Kyrgyz and Tajik homes. Along this route, fights would sometimes break out, particularly among youths. The situation improved after potable water was piped into the village, but this required the efforts (and funding) of several non-governmental organizations.

Outside the villages, border areas also have no markers or checkpoints, just hills and roads straddling a squiggly imaginary line. Of 971 kilometers dividing the two countries, just over half – 519 kilometers – has officially been agreed upon, according to the Kyrgyz government department for border delimitation. This creates opportunities for both negligence and abuse. Both countries’ border troops regularly patrol contested areas and residents allege the soldiers sometimes harass them, limiting their movements, looking through their belongings or trying to extract bribes.

To make matters trickier, the porous frontier stimulates a robust shadow economy. One hot commodity is petrol, now about 30 percent cheaper in Kyrgyzstan than in Tajikistan. Along a stretch of paved road marking the boundary, a bevy of filling stations has cropped up on the Kyrgyz side in recent months; diplomats monitoring the area have heard that smugglers use these as fronts for delivering Kyrgyz fuel, which then enters Tajikistan duty-free. Sometimes illicit cross-border trade feeds into the interethnic tensions: In June, more than 20 Tajiks were briefly held hostage by a group of Kyrgyz in retaliation for the arrest of several accused smugglers.

During the Soviet era, when Bishkek and Dushanbe were both subordinate to Moscow, the border’s exact location wasn’t clear either, but disputes were muted by the sticks and carrots meted out by heavy-handed Communist authorities. Today, each country stakes its claims based on different Soviet-era maps.

“It is clear that the land is ours based on all the archival materials and Soviet documents,” said a local government official in Kyrgyzstan’s Batken Province. Negotiations are “being artificially protracted, not by us, but by our neighbors,” he said, on condition of anonymity due to the sensitivity of the topic.

Officials on the other side of the border, in Tajikistan’s Sughd Province, were more sanguine.

The Kyrgyz official also accuses Tajik authorities of condoning the illegal purchase of land and homes by its citizens on Kyrgyz soil – a charge Sanginov denied.

In the meantime, laws and injunctions meant to improve life in the border areas seem to exist on paper only. A 2011 Kyrgyz law conferring special status on border communities “doesn’t establish any clear mechanisms for implementation,” according to Bazarbai Masaitov of For Tolerance International, a Batken-based NGO working on conflict-mitigation.

Like other well-informed observers, Masaitov points out that delimitation won’t be enough to solve the area’s grave socioeconomic problems. Jobs are scarce and education inadequate.

“Much more has to be done to provide young people with employment,” he told EurasiaNet.org, adding that “young people are very aggressive, very nationalistically inclined,” especially after deadly clashes between Kyrgyz and Uzbeks in June 2010.

The longer the problems in the border areas are allowed to fester, the harder it will be to mend fences.

“When people have been living for many years with tensions between them, it's difficult to quickly unite them,” says Azam Azimov, project coordinator for the Association of Scientific and Technical Intelligentsia of Tajikistan, which is based in Khujand and partners with FTI on its conflict-mitigation projects.

For now, in Tash-Tumshuk/Hoja Alo, each ethnic group can do little more than insist its ancestors were there first. They justify their claims with a story of their forebear, Lord Holmat, a medieval landowner who fatefully started giving land to newcomers in exchange for their labor. Predictably, the villagers disagree on one detail: Kyrgyz say Holmat was Kyrgyz; Tajiks maintain he was Tajik.