Kyrgyzstan has sent a delegation to the Taliban, while neighbor Tajikistan flirts with the Afghan resistance. 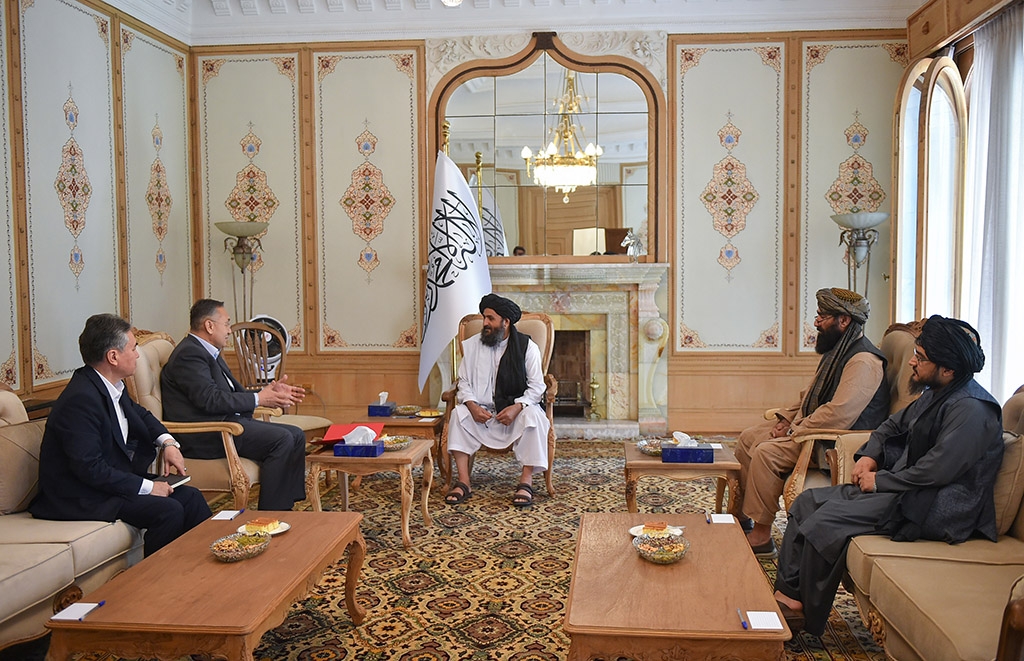 Eyebrows rose on September 23 when a Taliban spokesman tweeted to say that they had welcomed an official delegation from Kyrgyzstan headed by a senior security official from that country.

The Kyrgyz presidential administration later issued a statement to say that Taalatbek Masadykov, the deputy head of the national security council, was in Kabul to “exchange views on security issues in [Afghanistan] and in the region as a whole.”

Kyrgyzstan’s neighbor, Tajikistan, meanwhile, is worrying out loud that Afghanistan could become a haven for terrorist organizations.

“Various terrorist groups are actively using the unstable military-political situation in Afghanistan in order to strengthen their positions,” Tajik President Emomali Rahmon told the 76th session of the UN General Assembly on September 23.

Rahmon obliquely cast doubt on the willingness or ability of the new regime in Kabul to quash the proliferation of unrest across the region.

"We have seen the release of thousands of militants with the Islamic State, Al-Qaeda and other terrorist groups,” he said. “We are seriously concerned and regret that Afghanistan is once again on its way to becoming a platform for international terrorism.”

The posture adopted by Kyrgyzstan, meanwhile, is indicative of a desire to normalize Afghanistan’s new status on the global stage. Which is not to say Bishkek is not discomfited by the new order in Kabul.

Speaking earlier this month at a presidential summit of the Moscow-led Collective Security Treaty Organization, Kyrgyz President Sadyr Japarov voiced alarm at the ascendancy of the Taliban.

“He noted that the formation of a theocratic state in our region will undoubtedly have a negative effect on the situation in [CSTO] member countries,” his office cited him as saying in a statement.

Masadykov’s trip to Kabul, accordingly, represents either a desire for reassurance or a bold change of posture.

“It is hard to judge what is motivating Kyrgyzstan to take such a step – offering de facto recognition to the Taliban government – when most countries in the region are unwilling to engage in open dialogue,” Bishkek-based political analyst Emil Jurayev told Eurasianet.

Jurayev’s theory was that the trip was undertaken at the behest of Russia, which is Kyrgyzstan’s main security guarantor.

“This visit could have happened only in consultation with Moscow. I think that Russia is looking for options on how to initiate dialogue with the Taliban,” he said.

While talks between Masadykov and Baradar dwelled to some extent on security questions, the latter also appealed during the conversation with his Kyrgyz visitor for outside assistance.

Baradar complained that the international humanitarian aid that had been promised to Afghanistan had not yet been delivered and that the government’s foreign-based financial assets were still frozen. He then suggested designing confidence-building measures with neighboring countries as a way of dispelling distrust and in turn helping Afghanistan’s economy prosper.

But Tajikistan is not yet prepared to swallow how the Taliban came to power and, judging by its early decisions as rulers of Afghanistan, how it intends to rule further.

Rahmon has said he is particularly troubled by the Taliban’s failure to recognize the ethnic diversity of Afghanistan. In late August, he told the foreign minister of Pakistan, whose government is widely acknowledged to be a sponsor of the Taliban, that he would not recognize the movement’s rule over Afghanistan unless the ethnic Tajik minority was accorded a “worthy role” in the running of the country.

Moreover, at the grassroots level in Tajikistan, support for the armed opposition to the Taliban still understood to be holding out in remote areas of Afghanistan’s Tajik-dominated Panjshir Valley is intense. This sentiment has been offered the tacit blessing, and possibly encouragement, from the government.

Dushanbe may, however, be exploring ways out of the predicament of backing itself into openly hostile relations with a potentially troublesome neighbor.

Rahmon’s meeting with Pakistan’s Prime Minister Imran Khan on September 17 was in part devoted, according to a readout from the Tajik presidential administration, to seeking the “timely conclusion to conflict and tensions in the Panjshir province by declaring a ceasefire and opening roads for the provision of humanitarian assistance to the area.”

Tajikistan has to this end offered to host negotiations in Dushanbe between the Taliban and ethnic Tajik opposition formations.

Multiple elements within the Panjshir resistance movement – including, it has been reported, its most prominent figures: former Afghan First Vice President Amrullah Saleh and Ahmad Massoud, the son of late Northern Alliance leader Ahmad Shah Massoud – have already quietly been offered sanctuary in Tajikistan.

Sputnik Tajikistan, a Russian state-run outlet, on September 24 cited unnamed sources as saying that Rahmon had met with four representatives of the National Resistance Front of Afghanistan. The purpose of that alleged meeting is not known.

Dushanbe-based analyst Abdumalik Kadyrov sees the potential involvement of Russia, which has thousands of troops stationed in southern Tajikistan, in this set of developments too.

“Russia is invested in Panjshir as well. Russia has always played a double game in Afghanistan, and it is doing that now,” Kadyrov said.

The Kremlin’s stated preference before the fall of President Ashraf Ghani’s government was for an interim so-called transitional government brokered by itself, the United States, China and Pakistan.

With that option having evaporated in August, Russia’s leverage was greatly weakened. But tacit or implicit support for a counterweight to the Taliban in Afghanistan, argues Kadyrov, could help redress the situation.

“If the Taliban doesn’t pay heed to Russia’s interests, Panjshir can be used as an instrument of blackmail against them,” he said.

Kadyrov drew attention to how Moscow has in recent weeks pledged its readiness to sell weaponry to Tajikistan at a substantial discount.

“And yet, we have no money,” he said. “Maybe [the weapons are] intended for Ahmad Massoud?”