Tajik media sources say one of its soldiers was killed. 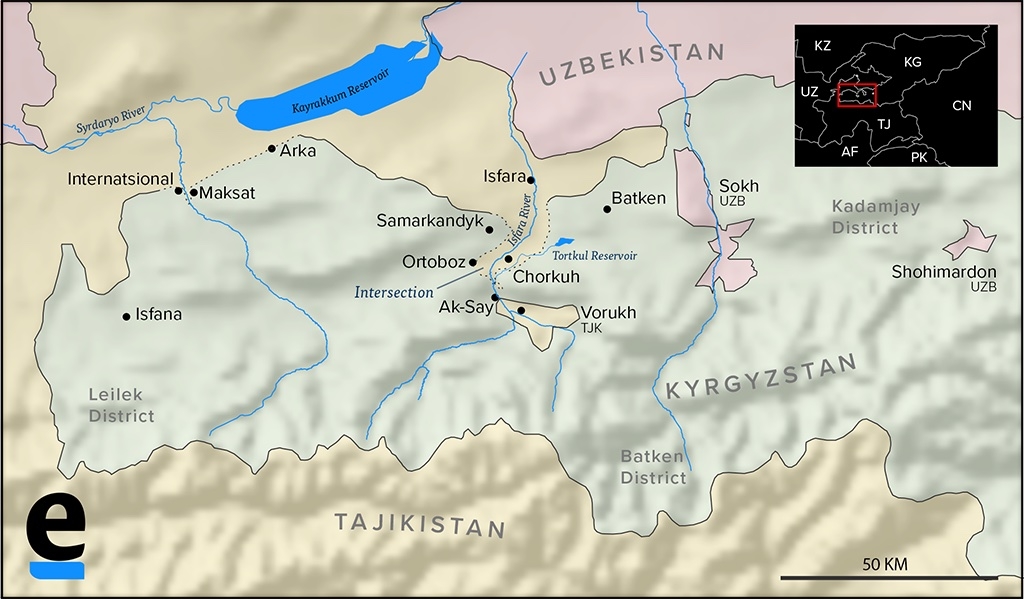 The unmarked border has seen multiple clashes over the decades.

Border troops from Kyrgyzstan and Tajikistan exchanged sustained gunfire over several hours on September 14, just one day after Kyrgyzstan flaunted Turkish-made drones that it has implicitly touted as its guarantee for ensuring an edge in future confrontations.

Security officials from both countries agreed on little except that a clash had occurred.

“They fired without reason at Tajik border guards with machine guns, automatic rifles, and other weapons,” the Tajik GKNB said in a statement, which described the incident as having started at 7:30 a.m. Bishkek time (0230 GMT).

At least one Tajik border guard was killed and another five were wounded in the clash, Dushanbe-based outlet Asia-Plus reported, citing hospital workers in the Vorukh enclave.

Tajik security services say their troops returned fire and that officials from both countries later engaged in negotiations to deescalate the conflict.

Dozens of such incidents have occurred along various points of the un-demarcated Kyrgyz-Tajik border in the past few decades. In a development that has troubled international organizations that have sought without success to push the countries toward mediation, increasingly powerful weaponry has been deployed by the countries’ troops over the years.

Kyrgyz security services, also known by the Russian-language initials GKNB, claimed the confrontation began when one of their men discovered a Tajik border guard in a position beyond a demarcation line previously agreed upon by both countries. The Tajik soldier refused to step down and eventually opened fire, they said in a statement.

“Despite a cease-fire agreement having been reached, the Tajik side from time to time opens fire at Kyrgyz positions,” the border service in Bishkek said.

In yet another statement, the border service said that by 12:40 p.m. Bishkek time, all gunfire had ceased. Kyrgyz officials said in that press release that border service representatives were engaged in another round of talks.

Kyrgyz officials said none of their troops were injured in the clash.

One day before this latest round of fighting began, Kyrgyz President Sadyr Japarov and the head of the security services, Kamchybek Tashiyev, attended a ceremony to mark the opening of a base to be used for deploying recently acquired Turkish-made Bayraktar TB2 unmanned aerial vehicles. The drones have been used to great effect by Ukrainian forces fighting against the invading Russian army and, before that, by Azerbaijan in its war with Armenia in 2020.

Japarov said in a speech at the base opening ceremony that “ensuring the security of the borders of Kyrgyzstan is considered one of the state’s priorities.”

Tajikistan has similarly been undertaking concerted efforts to develop its own drone fleet in a certain indication it is unwilling to lose aerial superiority in future border conflicts.

In May, Iran’s armed forces chief of staff, Major-General Mohammad Bagheri, traveled to Dushanbe with pledges to enhance bilateral security cooperation. During that visit, Bagheri and his Tajik counterpart attended the opening of a facility for the production of Iranian-designed Ababil-2 tactical drones.

The unmanned aerial vehicle is described by U.S. military sources as a single-engine, long-range, low-technology drone that is mainly used as a target drone for training anti-aircraft defense crews, but which can also be deployed for “rudimentary surveillance capabilities” and as “a loitering munition.”