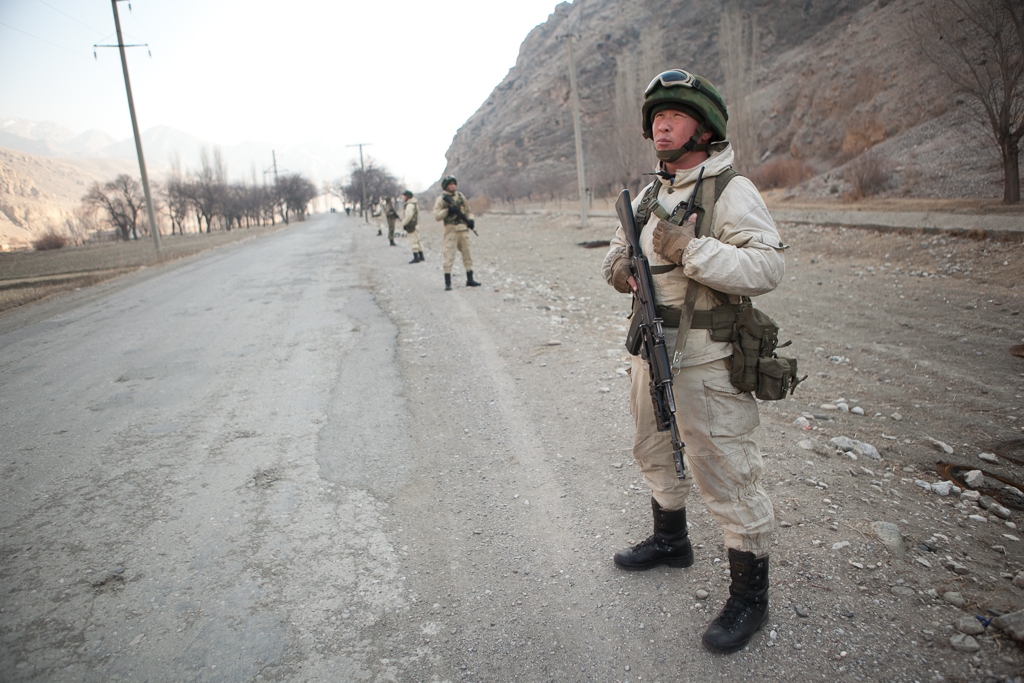 Kyrgyz border troops patrol a road on disputed territory connecting Ak-Sai with Kyrgyzstan and Vorukh with Tajikistan. (all photos by David Trilling) 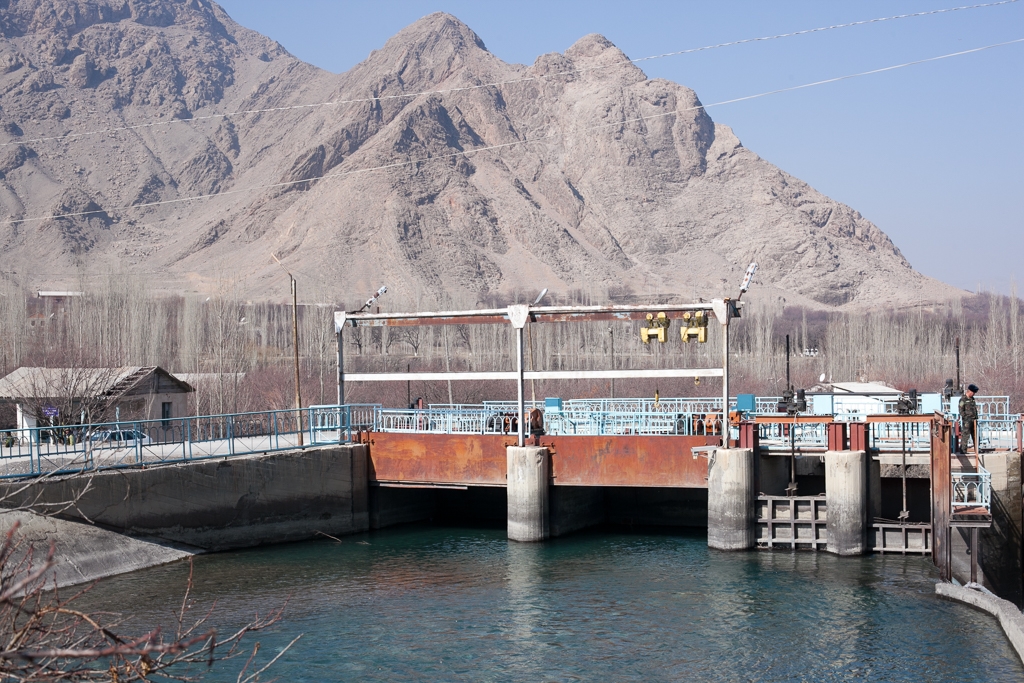 Tajik and Kyrgyz military units face off across a bridge over the Golovnoi sluice, where a Jan. 11 shootout chilled relations between the countries. 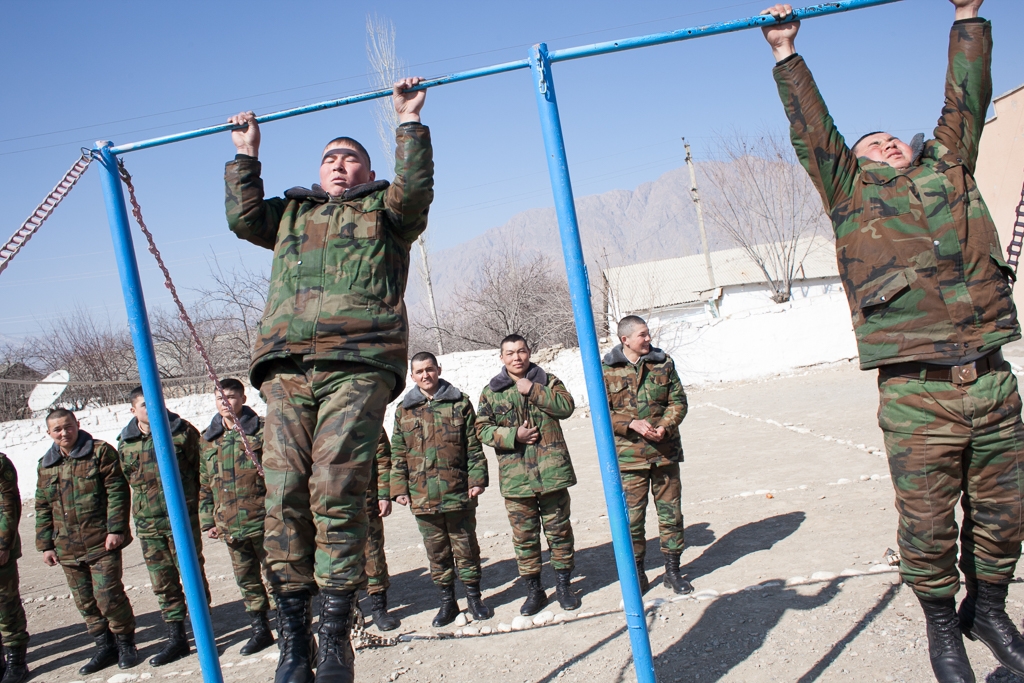 Kyrgyz conscripts train at the Kapchagay border post in Ak-Sai. 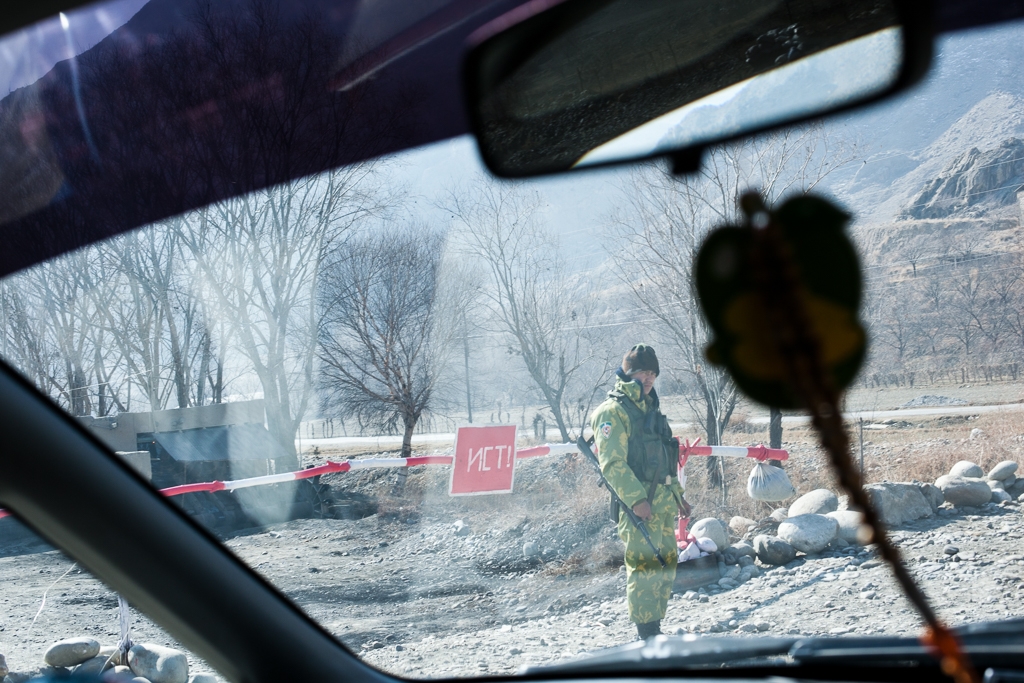 A Tajik soldier guards a post in disputed territory between Tajikistan and Kyrgyzstan near a village the Tajiks call Hoji Alo. 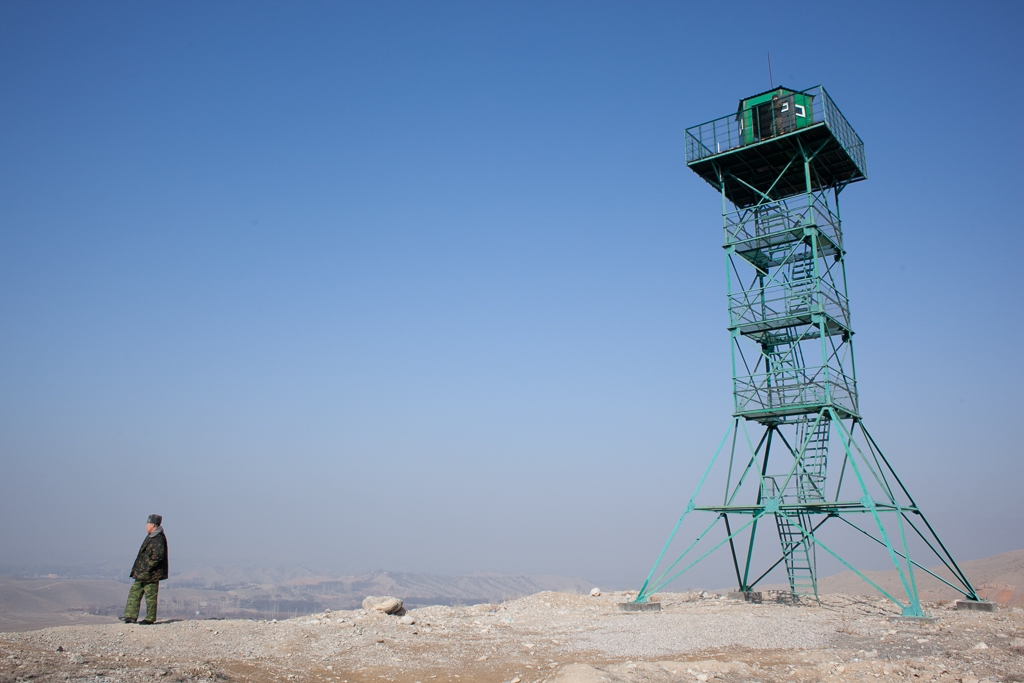 The Kyrgyz are building new watchtowers as part of their efforts to secure the border. 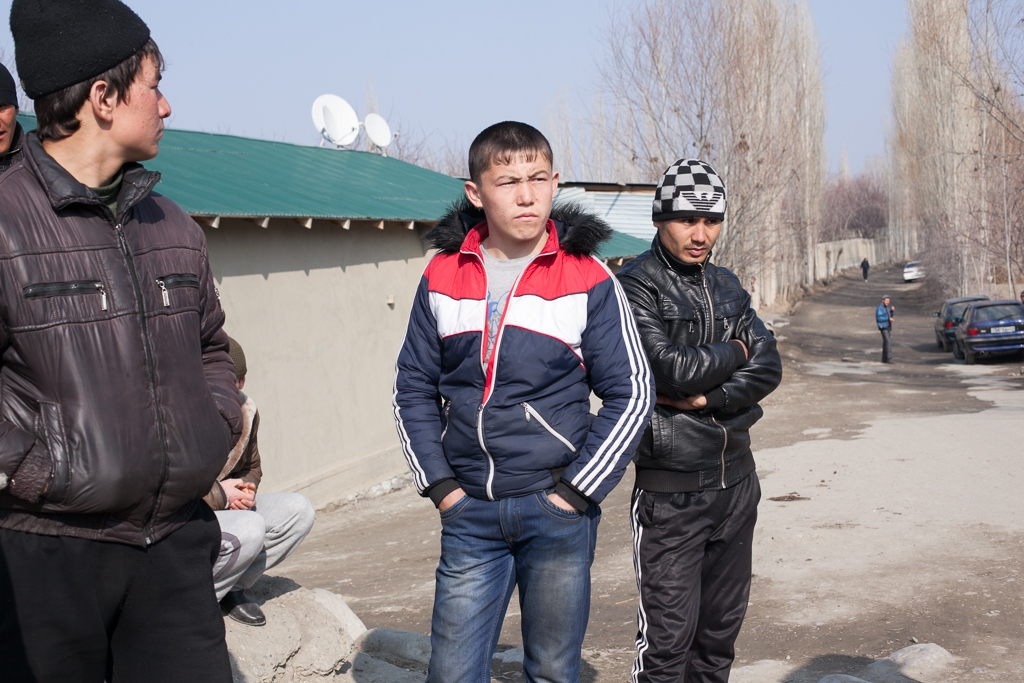 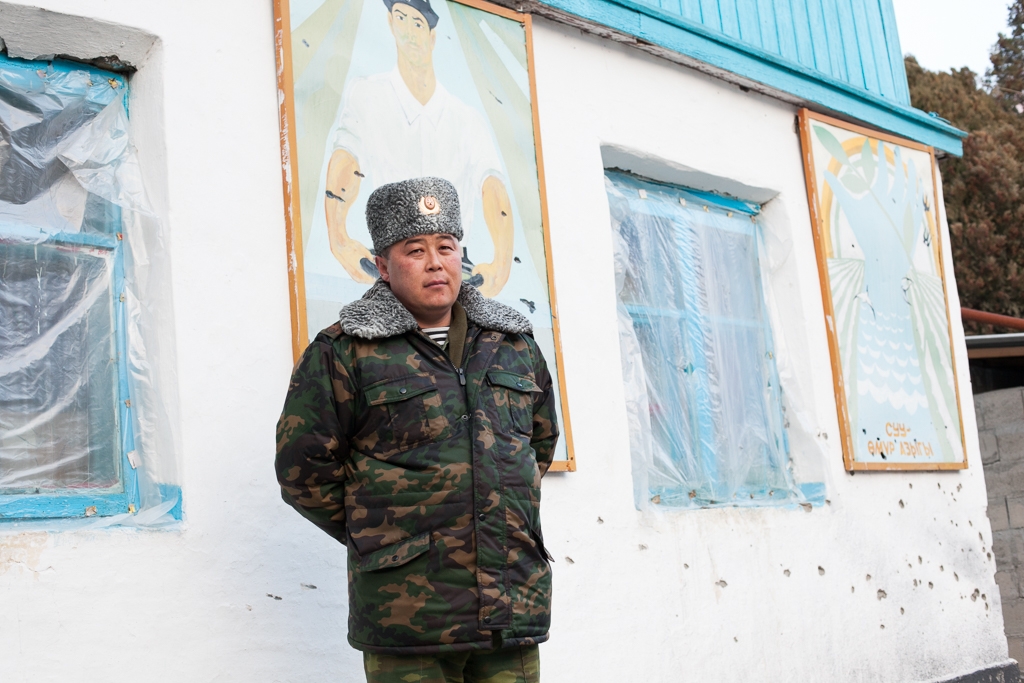 Kyrgyz Col. Erzat Shamshiev stands before a wall that took Kalashnikov fire during the shootout at Golovnoi. 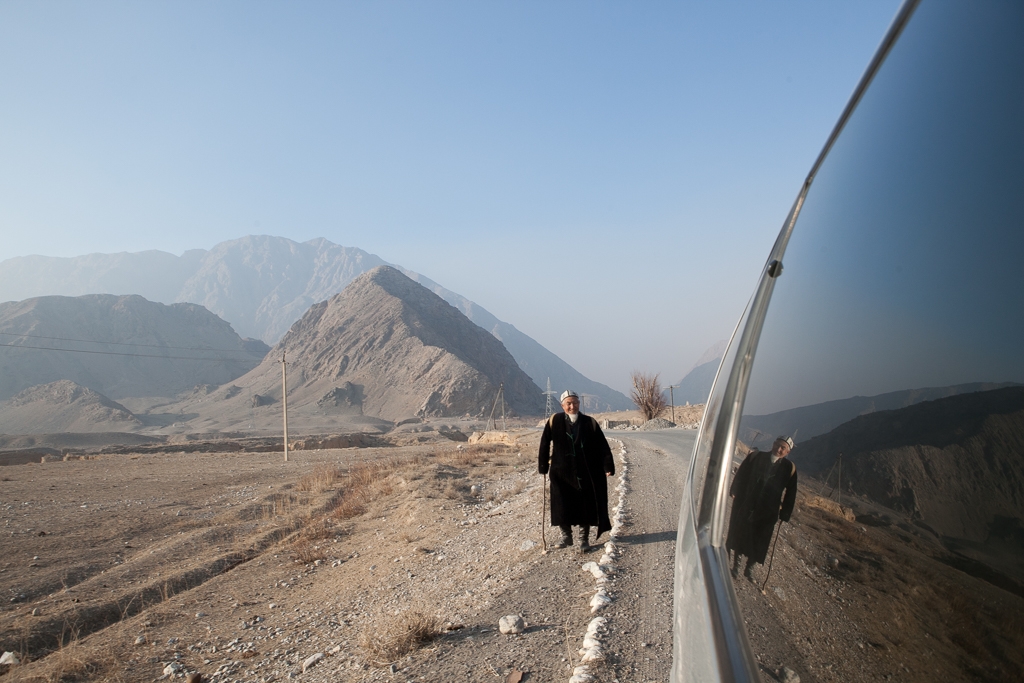 A man walks along a road passing through disputed territory that connects Kyrgyzstan and Tajikistan. 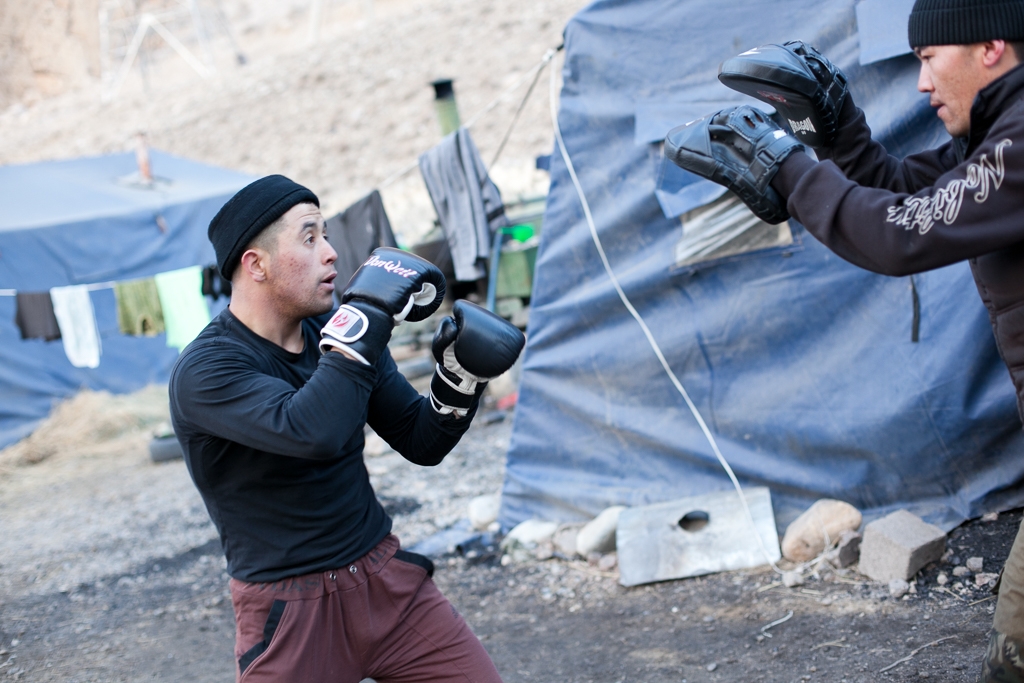 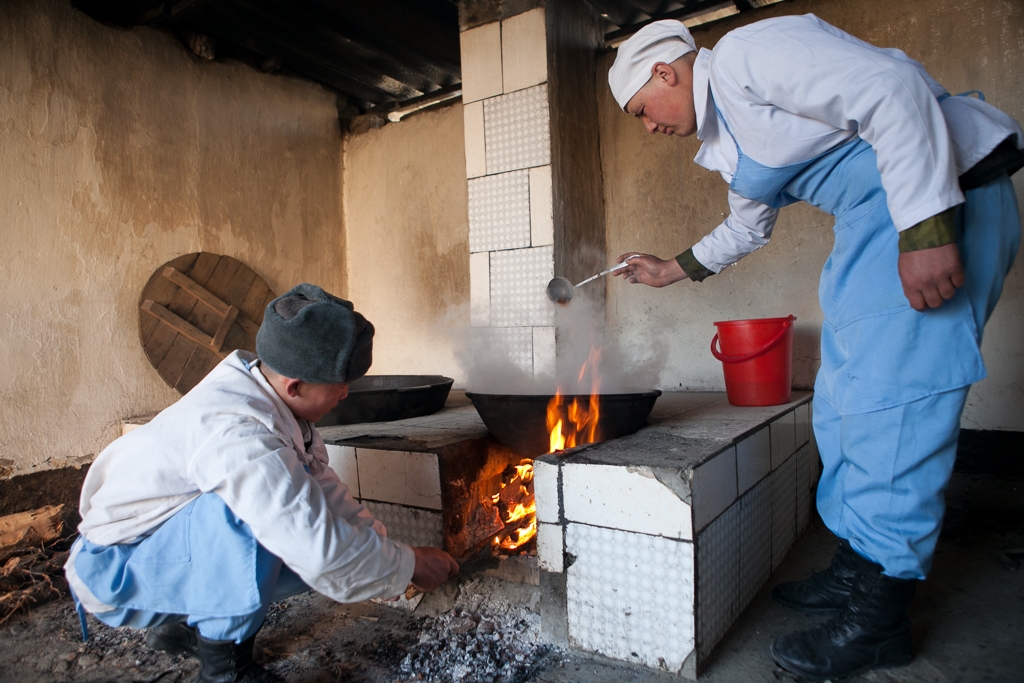 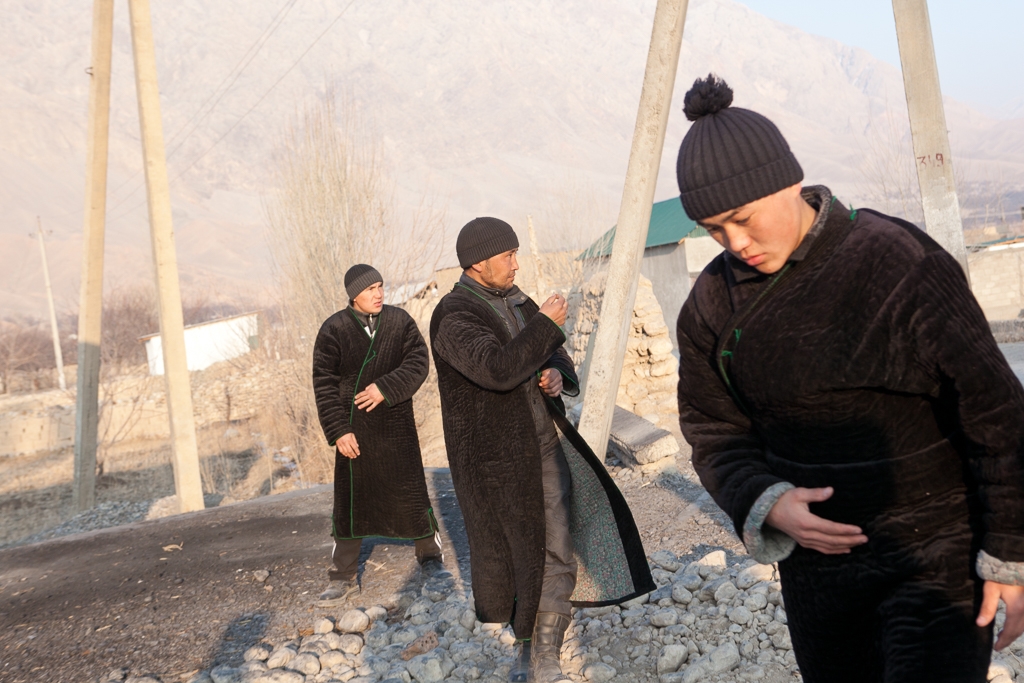 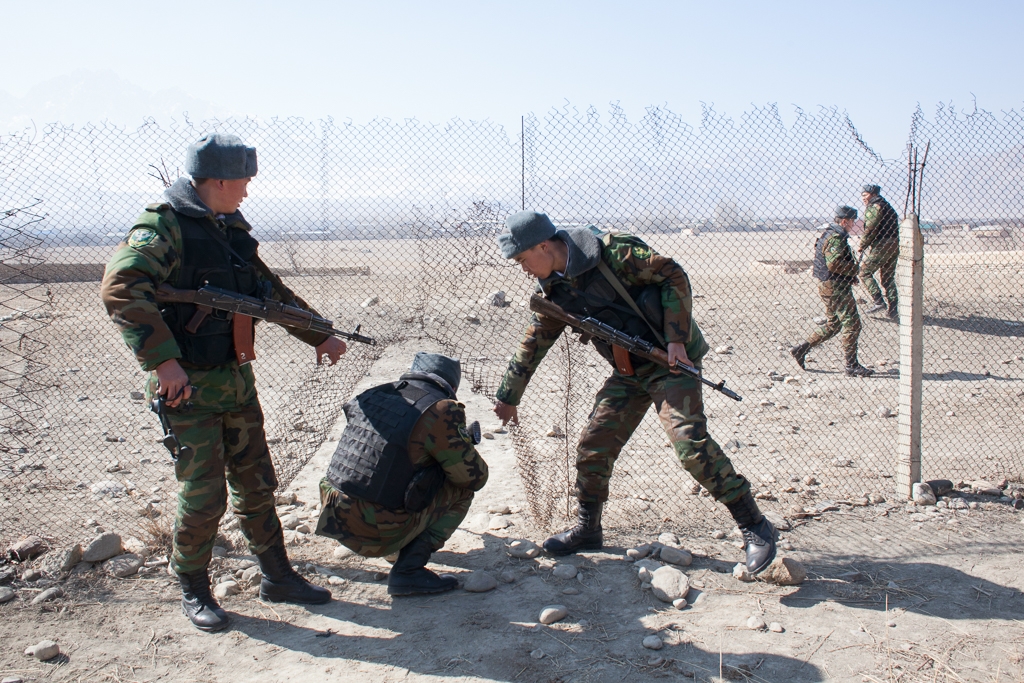 Kyrgyz border conscripts patrol in and around Ak-Sai and areas Kyrgyzstan disputes with Tajikistan's Vorukh exclave. 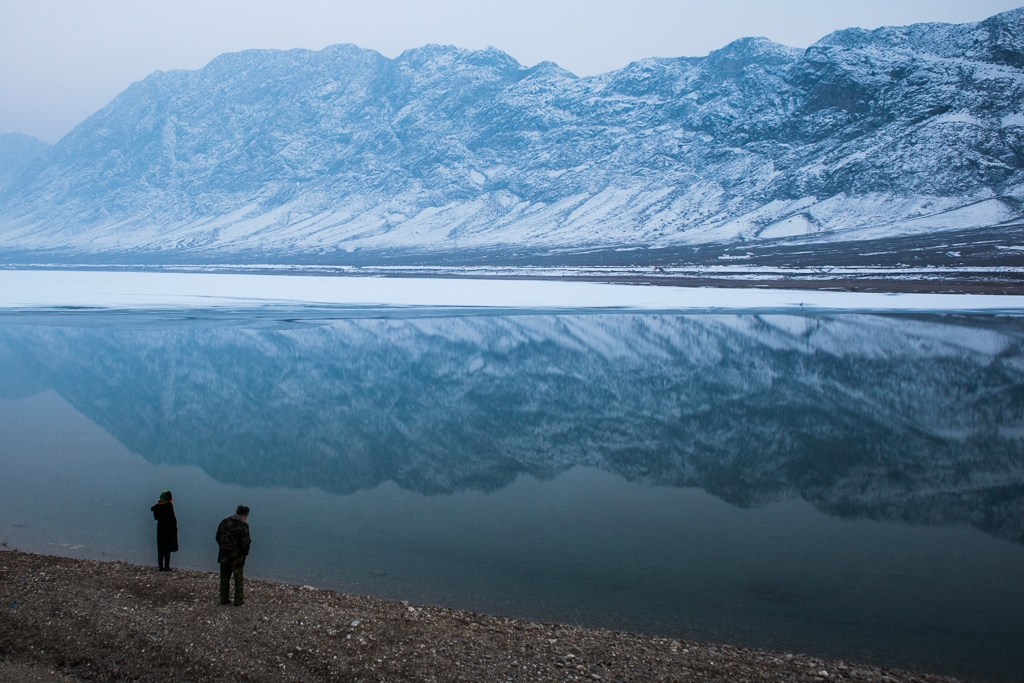 Downstream from the Golovnoi water diversion point is the Tortkul Reservoir, in Kyrgyzstan. 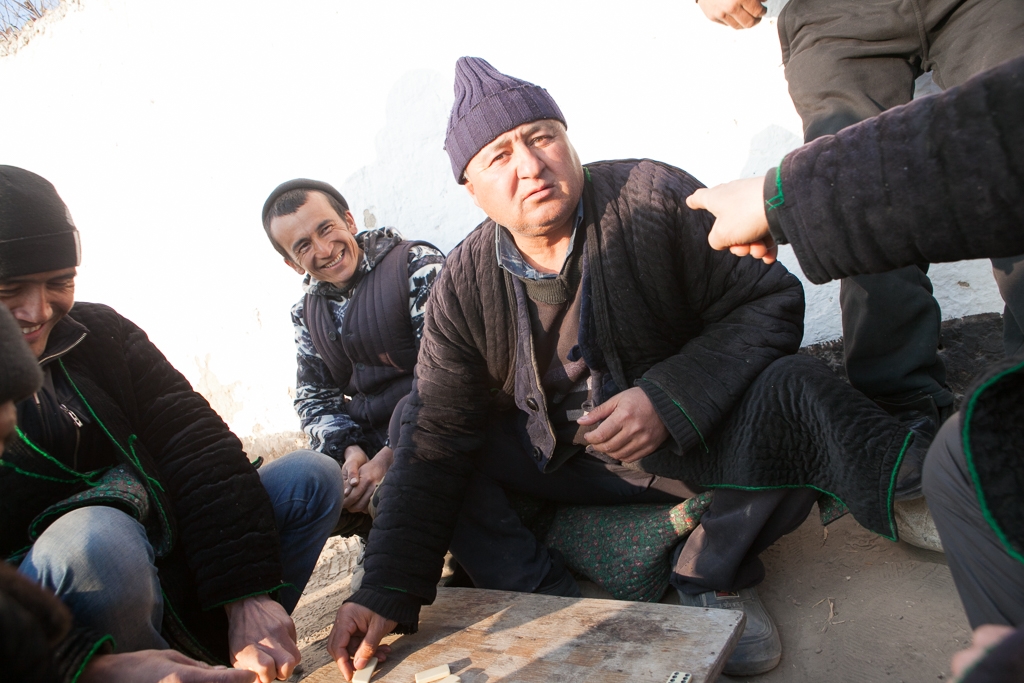 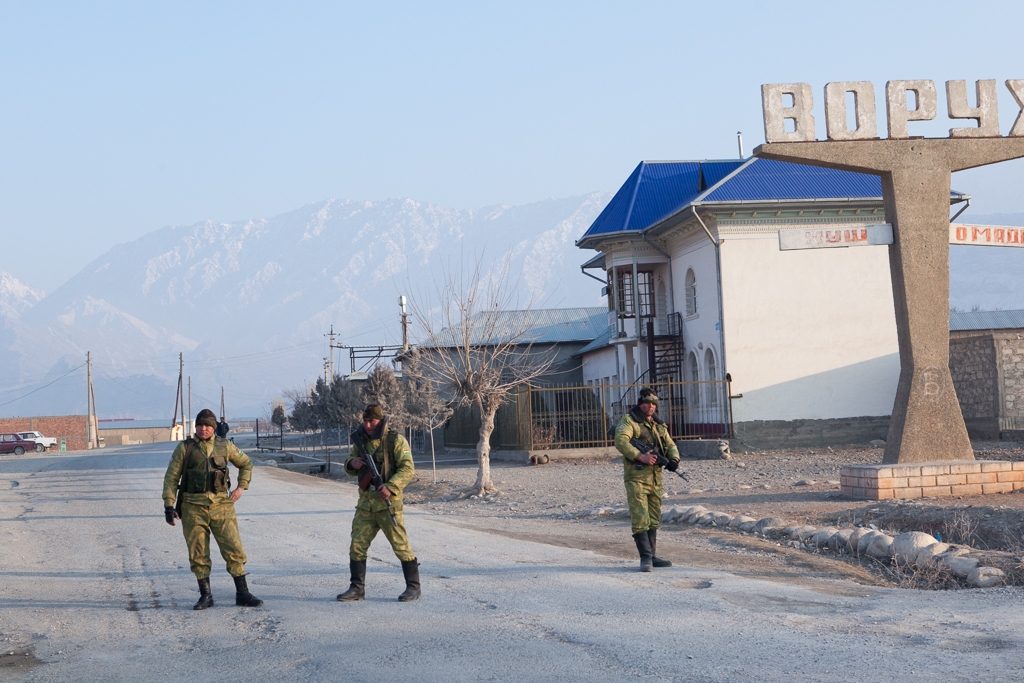 Tajik border guards block the de facto entrance to the Tajik exclave of Vorukh.
prev
next

Men in fatigues face off across a small bridge inside a gorge: On the higher ground, a dozen Kyrgyz special forces and border guards are encamped in an apricot orchard; less than 15 meters away, a handful of uniformed and unidentified Tajiks stare back through binoculars, their Kalashnikovs locked and loaded.

Known locally as the “Golovnoi” water diversion unit, the bridge covers a sluice controlling water to populated areas in both Kyrgyzstan and Tajikistan downstream. Yet it stands on disputed territory that, despite countless official meetings, has not been delimited since the breakup of the Soviet Union in 1991. Long a tense area, since January the mood here has darkened.

On an escarpment above the bridge, behind the Kyrgyz tents and sandbag parapets, behind piles of tires the soldiers burn at night to keep warm, several bulldozers and cement mixers sit idle. They had been building a new bypass road that, as it inched toward Golovnoi last year and into disputed territory, ratcheted up tensions on the border by threatening to upset a delicate status quo. The new road would allow the Kyrgyz to stop using an existing route the two ethnic groups currently share; some Tajiks fear this would embolden the Kyrgyz to obstruct passage on that shared road, action that could cut off a settlement of some 30,000 Tajiks.

Golovnoi (see map here) was the scene of a shootout on January 11, by most accounts the worst border violence ever between the two generally peaceable neighbors. Both sides say the other fired first; at least eight were wounded. The Kyrgyz contend the Tajiks used mortars and rocket-propelled grenades. As the standoff now enters a third month there is little to suggest tension will ease anytime soon.

Kyrgyz and Tajiks have lived together in these disputed areas for generations. Today, their homes are arranged in a “checkerboard” pattern—there is no defined border and citizenship coincides with ethnicity. As the population grows, and arable land in the surrounding valleys grows scarce, the increasing militarization of the border raises the potential for violence. On the ground, decisions are made by heavily armed, 18-year-old conscripts barely able to communicate with each other; most speak little Russian, once the common language. On both sides they earn less than $6 per month.

“Ten years ago, we’d hang out with Kyrgyz friends, play football together, visit each others’ homes. Not anymore. Just this morning we were standing here and the Kyrgyz border guards came and cursed at us and told us we can’t stand here,” says Abdujalil Abdurahimov, 28, a Tajik resident of a mixed village he calls Somonion and the Kyrgyz call Kok-Tash, a grouping of fenced-in homes without indoor plumbing and limited electricity just downstream from Golovnoi. “How much longer should we stand this?” he added, as a crowd of young Tajik men gathered around to voice their agreement.

Both Kyrgyz and Tajiks complain of harassment from border guards representing the other country, about villagers of the other ethnicity throwing rocks at their cars, or young men picking fights. Each year the situation gets worse, and each year more residents seem convinced a clear border is the answer. Abdurahimov, who like most of the young men in the village goes to Russia annually to work (many a Moscow apricot vendor hails from these villages), says one problem is the fast-growing population. By his count, 10 years ago Somonion/Kok-Tash had five families; today it has 150.

Upstream from Somonion/Kok-Tash and the Golovnoi sluice, the two countries share a road leading toward a Kyrgyz village and a Tajik town. In bygone years, such interdependence encouraged peaceful interaction. But nowadays, soldiers from both countries patrol it. And that seems to be fueling tensions. A concerned crowd gathers when a car breaks down in the disputed territory, or when local Tajik residents climb up to fix a road sign they say had faded so badly that a dangerous curve was causing more accidents than before. Here, any small dispute that elsewhere might be easily resolved can quickly mobilize locals against each other.

“I wouldn’t say we were friends, but we had relations. Now, since the [January] conflict, nothing. We don’t even trade groceries anymore,” says Turat Akhmedov, 62, a Kyrgyz resident of Ak-Sai. “The problem is that they want us to go through their territory, to be dependent on them. They won’t let us build our own road.”

The bypass road the Kyrgyz are financing and building with Chinese workers circles around the shared road and a disputed two-kilometer stretch of apricot orchards and rice paddies to Ak-Sai. This Kyrgyz village is strategically placed: Through it passes all traffic to the Tajik exclave of Vorukh and its 30,000 residents.

At a reinforced-concrete sign marking the entrance to Vorukh, Kyrgyz and Tajik police stop to chat (older than the conscripts, they speak decent Russian), but an aggressive group of young men appears and the cops ask everyone to retreat from the gravel road that marks the de facto border. An elementary school on one side of the street houses a unit of special forces from Kyrgyzstan’s Interior Ministry. In front, children are playing; out back the spetsnaz troops are cooking dinner in a mobile field kitchen.

Officials on both sides insist they have no desire to fight and wax lyrical about “thousands of years” of peace. But in multiple meetings since the January shootout, the only tangible thing the two sides have agreed on is to have more meetings. The Kyrgyz insist their road is not negotiable.

Kyrgyzstan’s chief negotiator, Deputy Prime Minister Tokun Mamytov, admits that drawing a border is no easy task. Since 2006, the two sides have not delimited a single one of the 460 contested kilometers along their shared frontier, which totals 971 kilometers. Negotiations are “deadlocked” because the Kyrgyz refer to maps from the 1950s and the Tajiks from the 1920s. The frontier mattered little when both republics answered to the Kremlin in Moscow. Throughout the Soviet era the border shifted as collective farms traded jurisdiction over land and crisscrossing canals transformed barren moonscape-like terrain into fertile farmland.

Mamytov, one of the country’s top-ranking security officials, describes how during negotiations the Tajiks tell him, “‘If you build this road, you won’t be under our control and we want you to be under Tajik control.’ They say we’ll be too independent, we must travel through Tajik territory.” (After promising to respond to written questions, the office of Mamytov’s counterpart in negotiations, Tajik Deputy Prime Minister Murodali Alimardon, refused to comment.)

Mamytov denies his government would ever cut the road to Vorukh as a punitive measure. But such fear on the part of the surrounded Tajiks is understandable. As the road construction moved closer to Ak-Sai and tensions mounted throughout 2013, local villagers on several occasions tried cutting off neighboring communities, both Tajik and Kyrgyz, after arguments. For now, Kyrgyzstan has suspended construction of the controversial bypass. That’s translated into a temporary peace, says Col. Erzat Shamshiev, the head of the Kyrgyz Border Service for Batken Province. Gesturing to a cliff that must be blasted to make way for the road, Shamshiev, who is 38 but looks much older, says, “Because there’s no construction here now, tensions have eased. But when construction restarts, we’ll probably have problems again.”

Asked which is more important, the road or peace, he quickly replies, “The road.” Pausing, he adds, “If there is no new road we’ll have to share a road and eventually there will be a conflict anyways.”