At the scene of recent and regular border clashes, our photographer found heavy weapons and a government intent on silencing inquiry. 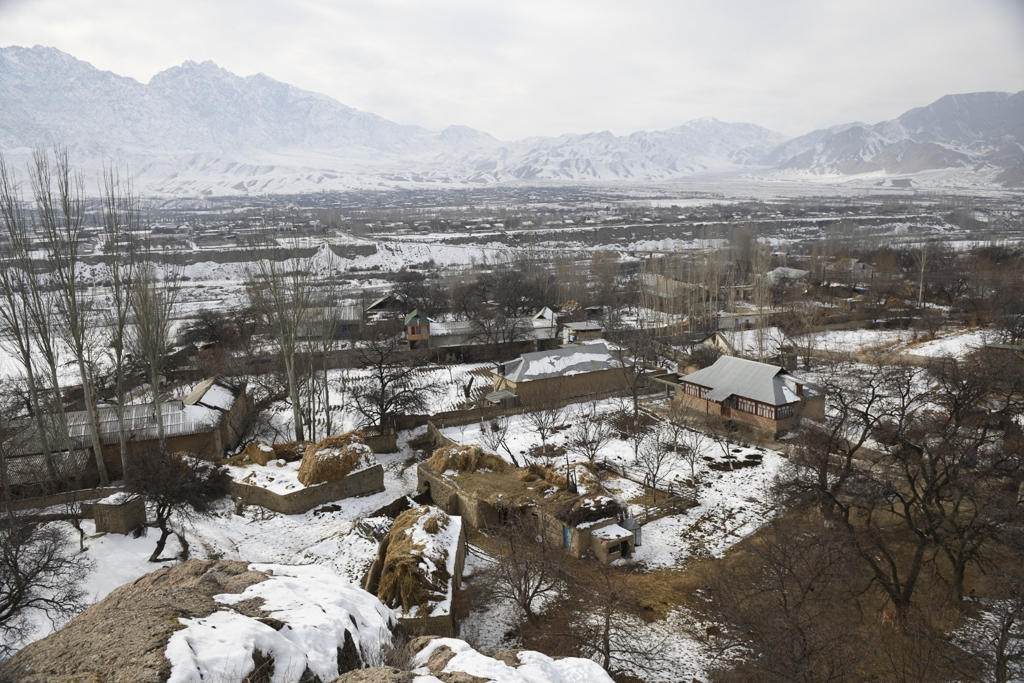 Kapchygai. Villages in this disputed corner of the Fergana Valley straddle an invisible border. (all photos by Danil Usmanov)

When fighting breaks out on Kyrgyzstan and Tajikistan’s border these days, residents quickly pack their bags and flee.

The weapons deployed by the armed forces of both countries have become so serious and heavy that remaining in place is to take your life into your own hands.

On the day after the most recent bout of fighting, which unfolded over several hours on January 27, the head of Kyrgyzstan’s government, Akylbek Japarov, was urging people to return to their homes.

Around 600 people, mostly women and children, had been evacuated from the village of Kok-Tash to the regional capital, Batken. On the day after the skirmishes, only 60-odd people would agree to Japarov’s plea. 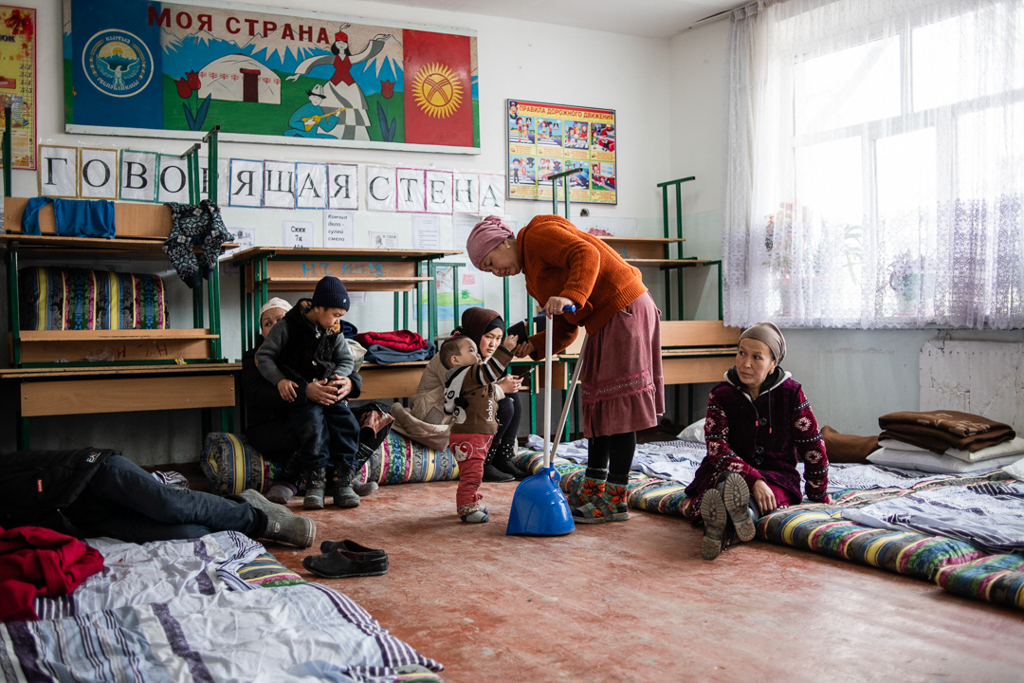 In their place of refuge, in Batken’s Bokonbayev school, the displaced families spoke to journalists about their fear of returning. One elderly lady told a Eurasianet journalist she had come to Batken from the village of Dakhna, which is just south of Kok-Tash. She urged reporters to visit to understand just how complicated the situation is there.

Around this persistent flashpoint, villages straddle an invisible border. The border is invisible because neither government has ever quite agreed on where it should be drawn. Officials from the two countries cite Soviet maps of differing vintage when arguing about where the line should run.

But it is even more complicated than that in places like Dakhna, a village on the banks of the narrow and lazy Ak-Sai River. 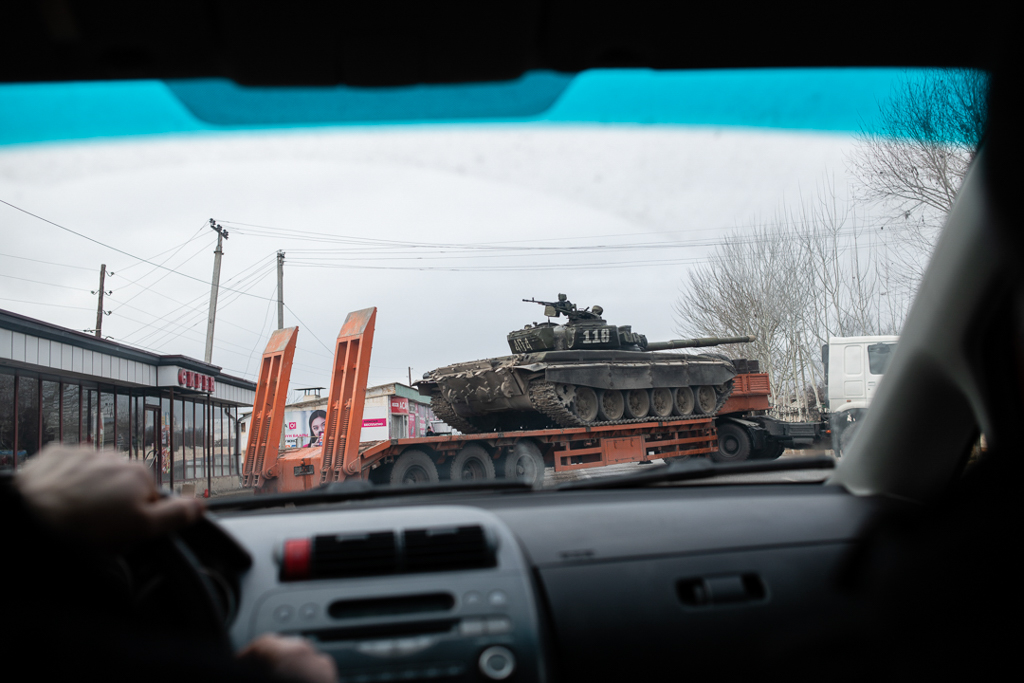 On the way there, visiting journalists spotted an armored vehicle loaded on a trailer seemingly headed in the general direction of Batken. Going from east to west, cars headed to Dakhna must first pass through Kok-Tash. There is only one large store in the village. Motorists fill their tanks out of plastic flasks of gasoline. Men hung around, sitting on benches, animatedly discussing the week’s events. Some of them agreed to accompany the visitors to Dakhna, which lies that little bit closer to Tajik territory.

As the car enters Dakhna, the predicament immediately becomes obvious.

This arrangement is what has led experts of this problem to refer to this as a “chessboard border.”

Older residents often fondly talk of earlier times, back when the Soviet Union still existed, when ethnic Kyrgyz and Tajiks lived in relative harmony. The distrust is now intense. Fences are built high and are sometimes strung with razor wire.

One resident whimsically illustrated the invisibility of the border by pointing to a row of small stones marking a turn into a narrow side road. Jumping quickly forward and back over the stones, he said: “Here I’m in Tajikistan, and here I’m in Kyrgyzstan.” 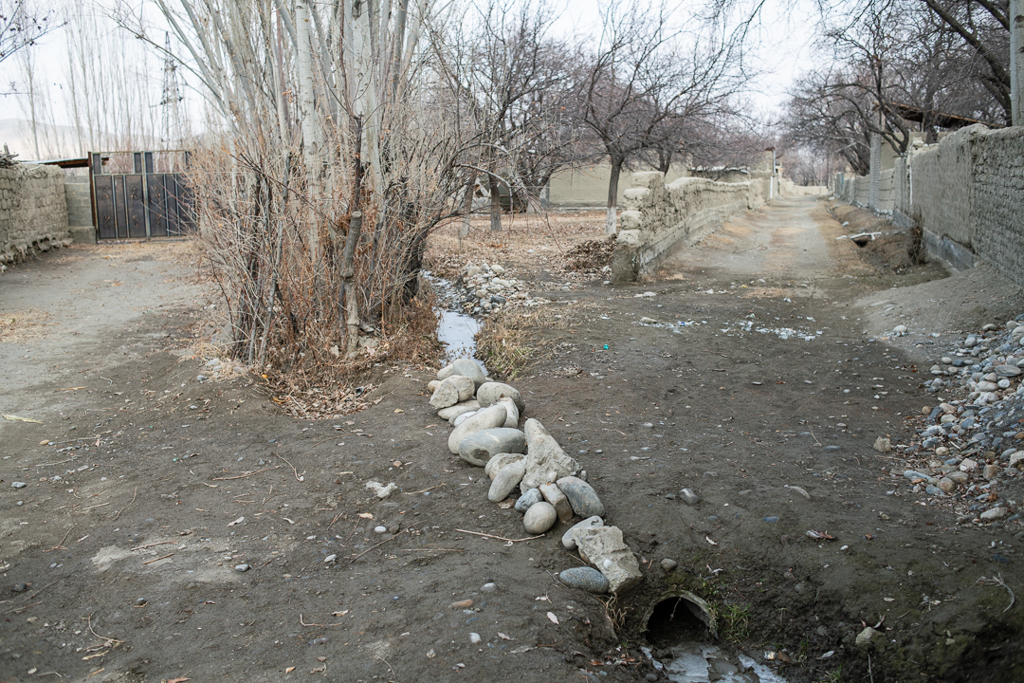 Conversation between the communities has dried up entirely. As one resident told Eurasianet, when Tajiks and Kyrgyz pass one another in the street, they avert their gaze. 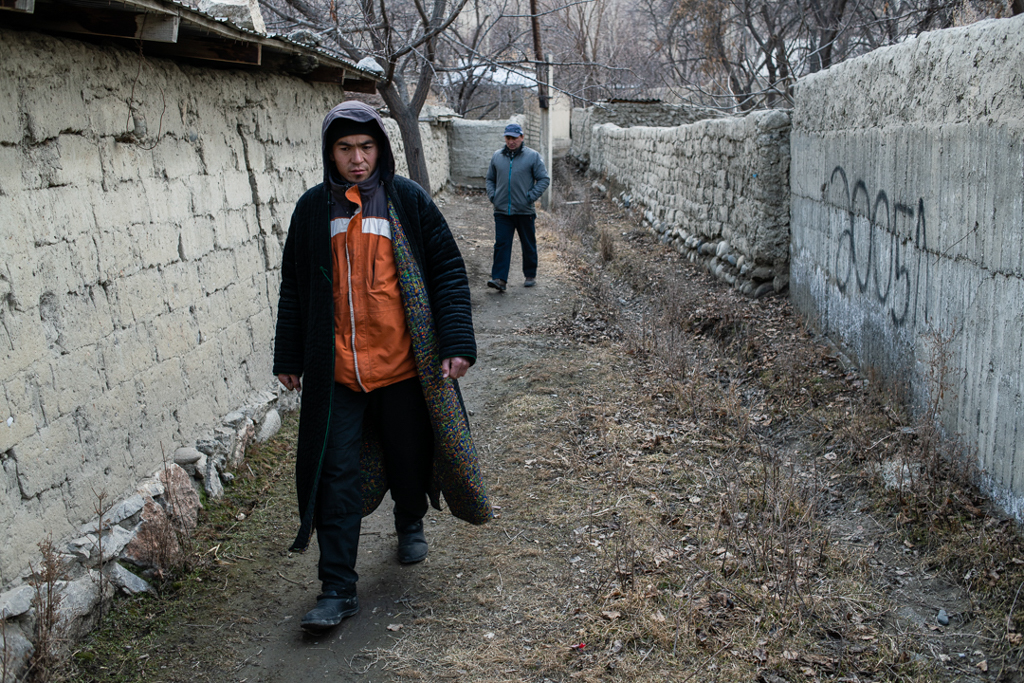 The clashes this time around were not quite as destructive as the ones that occurred in the spring of 2021. Eurasianet journalists on the Kyrgyz side spotted two burned-out sheds and a gutted car. Four cows burned alive in one of the sheds. Nobody is certain what started the fires. 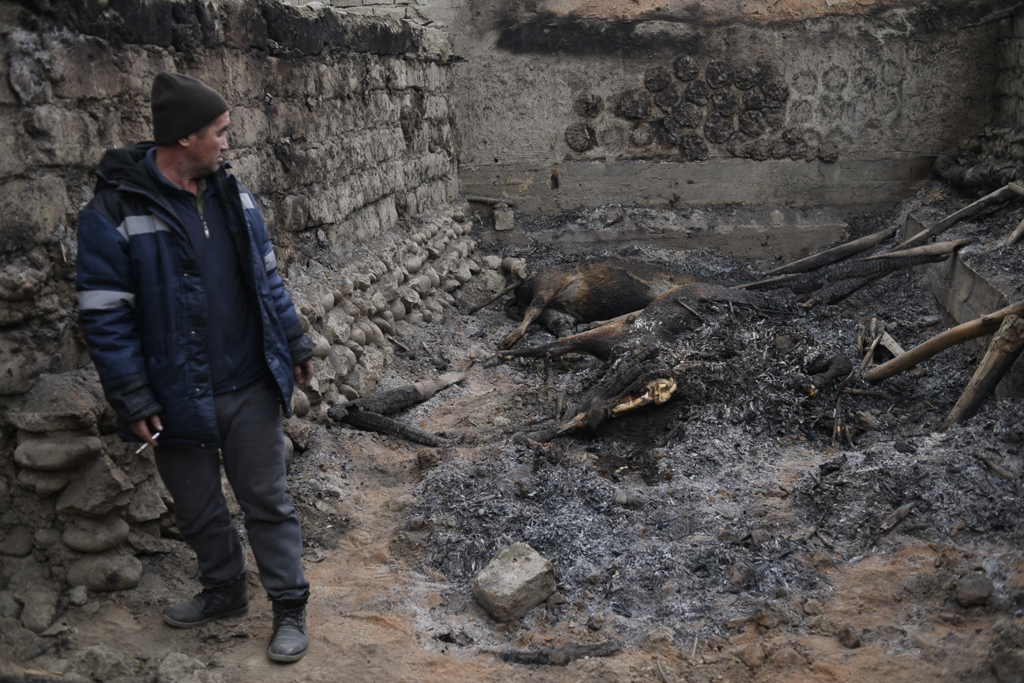 After a brief flurry of high-level negotiations between the two governments, the head of the Kyrgyz security services, Kamchybek Tashiyev, visited the settlement of Ak-Tatyr, which lies just west of Dakhna, to offer assurances to the local community. 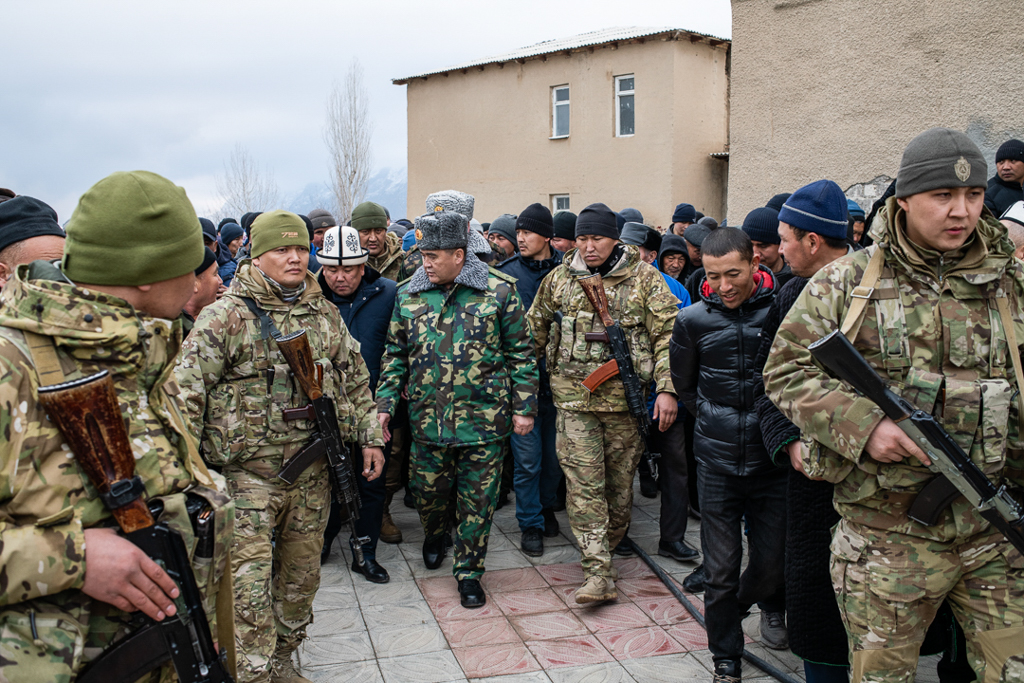 The assembly took place in the yard of the local school. Villagers stood around the perimeter, clambered onto ledges, or squatted at the front of the crowd to listen as Tashiyev talked into a microphone. He delivered many promises. 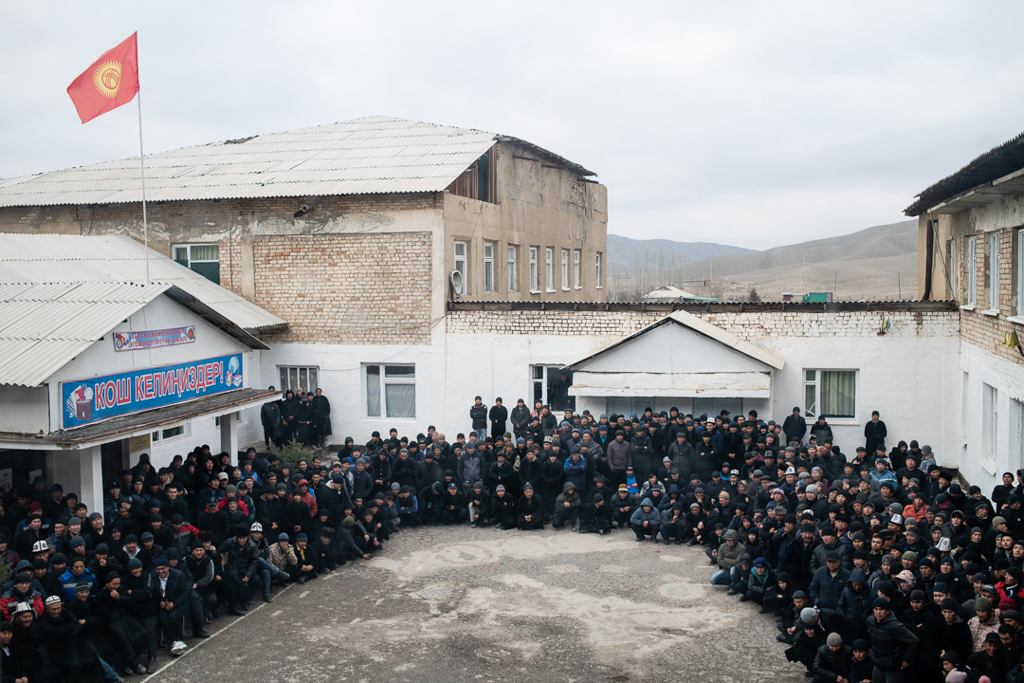 Money would be sent to the Batken region, he said, including for the drilling of new wells. And more weapons were on the way.

“In February, a lot of military equipment that was ordered earlier will arrive. You have never in your life seen such equipment. We have never had such equipment and machines before. It will all be delivered to Batken region,” he said.

The meeting lasted more than an hour, and the audience had many questions and observations for Tashiyev. One person noted that smuggling was still going on, despite official claims of a clampdown. Even when it was all over, residents followed Tashiyev and his retinue to their cars as they had more things they wanted to say to him. One man held out a letter as Tashiyev’s motorcade swept out, but nobody stopped to collect it.

The trouble last year began over water. This time, it is the road that is generating anguish. 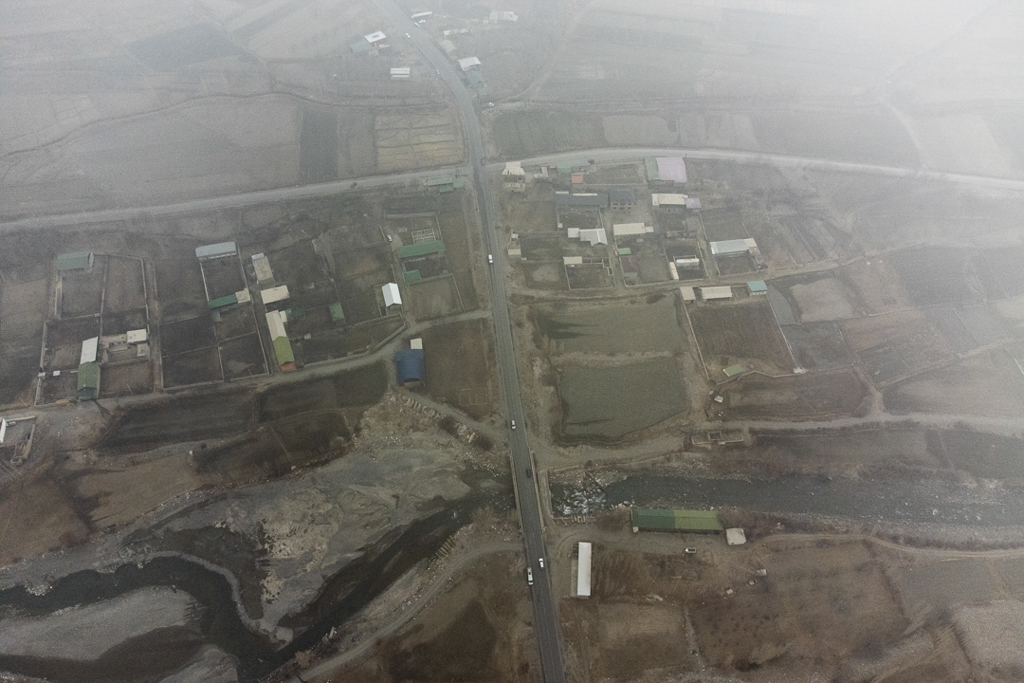 One focal point for this latest flare-up was an unassuming crossroads by the Kyrgyz village of Tort-Kocho – the name literally means “four roads.” The east-west axis is wholly Kyrgyz and joins Batken to the Leilek district in the bottom southwestern pocket of Kyrgyzstan. The norths-south road is a problem. It plunges south from the town of Isfara on the Tajik mainland, across that Tort-Kocho crossroad, through land that is sometimes Tajik and sometimes Kyrgyz, and then into the crowded and relatively prosperous Tajik enclave of Vorukh. 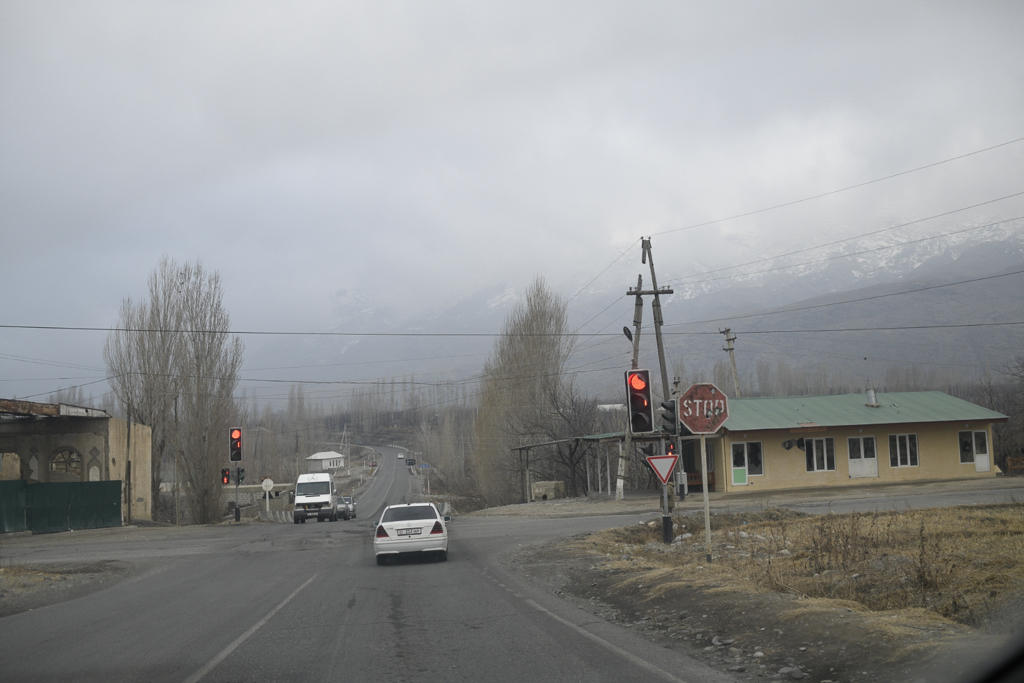 On January 30, a group of journalists traveled to Tort-Kocho to check on the mood. Police officers on the spot gave reporters clearance to move freely, but Kyrgyz border guards then intervened. While reporters and troops attempted to negotiate a compromise, a blast rang out somewhere to the east. A panicked-looking policeman ordered everybody to leave. It is likely the explosion was sappers detonating stray ordnance.

The last fully Kyrgyz village on the bottom end of the north-south road is Ak-Sai. A group of residents quickly gathered round to speak to the visiting journalists. They wanted to talk about insistent rumors that the Tajiks are planning to build their own road to Vorukh, a flyover that would obviate the need to use Kyrgyz roads.

Tashiyev had spoken about this speculation during his talk in Ak-Tatyr.

“I will speak to you about this openly. They are asking for a road to be built to Vorukh. So, yes, we cannot bar the way. There are 40,000 people living there. The road would go through Kapchygai,” he said, referring to a settlement adjacent to Ak-Sai. “But we will build the road ourselves. We have the funds for this.” 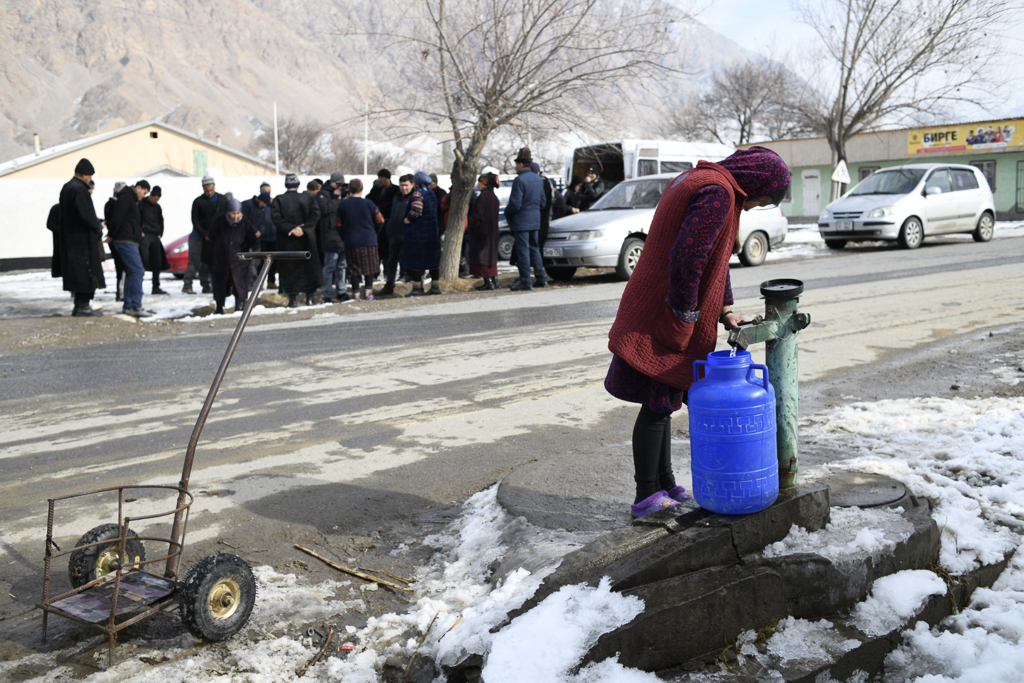 People in Ak-Sai and Kapchygai are deeply distressed at such talk. They worry that a new road might lead to Leilek district being cut off from the rest of Kyrgyzstan. Some also say that a flyover would be a prime spot for Tajik gunmen to take position in the event of a major conflict in future.

Minibuses packed with Tajiks traveling from Isfara to Vorukh regularly drive past Ak-Sai. While Eurasianet was there, passengers looked with undisguised curiosity at the crowd that had formed around the journalists.

Tashiyev dismisses concerns about Leilek becoming stranded as a result of any road construction.

“This is all false information. The status of the road, its use and other matters will be determined under an interstate agreement. There is no danger here,” he said.

Just for safe measure, however, men from Tashiyev’s agency have since his visit reportedly been paying visits to villagers who spoke out at the Ak-Tatyr gathering to warn them against making a fuss.

Uneasy normality has returned to this corner of Kyrgyzstan and Tajikistan. Only now there are more weapons floating about than ever before. The border is seemingly no closer to being demarcated. And anybody who is displeased about anything the government has planned is strongly encouraged to keep quiet. 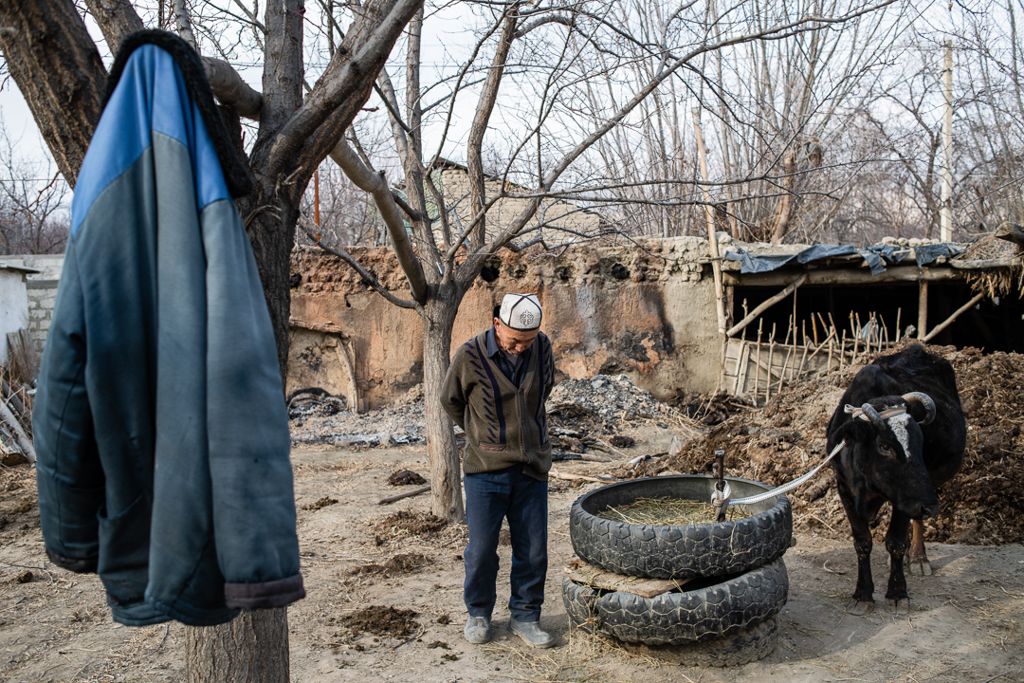