Our latest from the border: Eurasianet correspondents on both sides report burned homes, raw anger and pings of occasional gunfire. 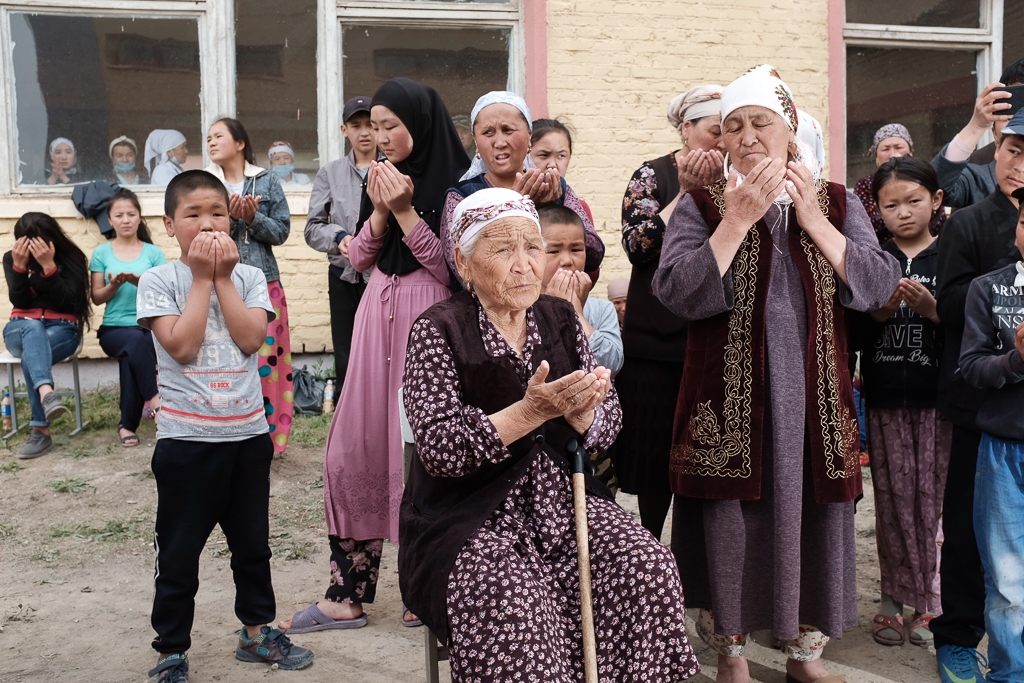 Women and children pray as they receive government aid at a school in Batken. (photos Danil Usmanov except where noted)

In spite of the occasional gunshots, fighting along sections of the border of Kyrgyzstan and Tajikistan has all but ceased.

Around the most combustible flashpoint, the non-demarcated sliver of land bridging mainland Tajikistan and its Vorukh exclave, which is surrounded entirely by Kyrgyz territory, moods were nonetheless still raw on May 1. Kyrgyz officials have said at least 34 were killed in fighting – that number may yet grow. The Tajiks are not releasing casualty figures.

Eurasianet correspondents traveling to the Kyrgyz settlement of Tort-Kocho, which lies adjacent to a key crossroad that runs south to Vorukh and west to the Kyrgyz district of Leilek, were met by angry villagers. Men wielding stones demanded journalists turn their cars around and refrain from taking photographs.

Suspicions about outsiders are running high. Anybody filming or snapping pictures is viewed as a potential spotter at the service of the Tajiks.

Around this time, the Kyrgyz Border Service had issued a statement to say that Tajik forces had blocked this very same road to Tort-Kocho. Nearby residents said something similar – that the Tajiks had piled up gravel to stop cars from getting past. This has always been a nightmare scenario for Kyrgyzstan as it would leave the sizable Leilek district entirely stranded.

Kyrgyz security officials in the same statement voiced their suspicions of a resumption of active military operations by Tajikistan – in defiance of commitments made a day earlier by both countries to pull back their forces from lines of contact.

“The movement of military machinery toward the direction of the Tajik-Kyrgyz border has been detected on the territory of Tajikistan,” the service said.

It is difficult for at least two reasons to speak in categorical terms about Tajik or Kyrgyz sides of the border, though. First, there is no definitively agreed border, which is the whole problem. And a more complicated matter is that villages, sometimes even neighborhoods and homesteads, are physically intermingled to a degree that wholly befuddles strangers.

Near Tort-Kocho is the Tajik-inhabited settlement of Khojai A’lo. Both locations are close to the water distribution facility, Golovnoi, that served as the initial trigger to clashes on April 28.

Much footage has circulated thus far on social media and messaging apps showing jubilant Tajik men crowing at Kyrgyz houses going up in flames. But journalists visiting Khojai A’lo on May 1 saw that this destruction of homes has been sustained by the Tajiks too.

Nizomiddin Shamsiddinov, a 60-year-old resident of Khojai A’lo, told Eurasianet that somebody called him while he was at his workplace on April 29 telling him to return home because of trouble on the border.

“When I arrived, I saw Kyrgyz people in civilian clothes pouring gasoline over houses and setting them alight,” Shamsiddinov told Eurasianet. “But they had hunting weapons. How can you fight against somebody when you don’t have weapons?”

Tajik soldiers patrolling around Khojai A’lo were uncharacteristically welcoming and upbeat, more so than they are in quieter times in fact, despite the events. When Eurasianet was passing through, Tajik forces had sent up a drone to get a sense of Kyrgyz positions. Occasional gunshots rang out – somebody appeared to be trying to shoot down the aircraft.

After a while, soldiers said that a Kyrgyz sniper had been detected in the hills overlooking Khojai A’lo and they warned locals to take shelter behind walls for safety. Pings of occasional incoming fire were the cue for troops to order away journalists.

But the unrest has not been contained to this area alone. Kyrgyz media cited local residents of Arka, a village 70 kilometers to the west, as saying several streets had been seized by Tajik troops who then hoisted the Tajik tricolor over captured buildings. Kyrgyz security sources alleged that Tajik troops had fired on houses in Arka belonging to Kyrgyz people. Sources in Dushanbe denied these reports.

Even as the odd gunshot was being exchanged, the heads of the two nations’ security services had consented to get around the negotiation table. The chairman of the Kyrgyz National Committee for National Security, Kamchybek Tashiyev, told reporters that a bilateral border demarcation committee had agreed on a four-point protocol.

“We are going through very difficult times. A tragedy has occurred. We hope that the decisions taken and reflected in the protocol are implemented,” Tashiyev said.

Those talks appear to have produced some immediate results. At 10 p.m., residents of villages in Kyrgyzstan’s Leilek district reported that Tajikistan was pulling back military hardware. It was earlier reported that the blockage on the Vorukh road had been lifted.

An agreement regarding border demarcation was signed by Tashiyev and his Tajik opposite party, Saymumin Yatimov, at 3 a.m. on May 2. Its contents were not immediately available.

Even higher-level consultations took place on May 1 over the phone between Kyrgyz President Sadyr Japarov and Tajik leader Emomali Rahmon.

“During a telephone conversation, the leaders of Kyrgyzstan and Tajikistan once again confirmed that all military equipment will be withdrawn from the border areas on both sides,” a Kyrgyz government readout of the conversation stated.

The presidents further agreed for a joint commission to audit all military equipment deployed along the perimeter of the border.

The government in Bishkek now also has the Kyrgyz people to reckon with. Several hundred rallied in the capital demanding immediate mobilization of anybody liable for military service. The crowd made demands to be given weapons so that they might “defend the motherland,” according to reporters on the scene.