Kyrgyzstan-Tajikistan: What’s Next After Border Shootout? 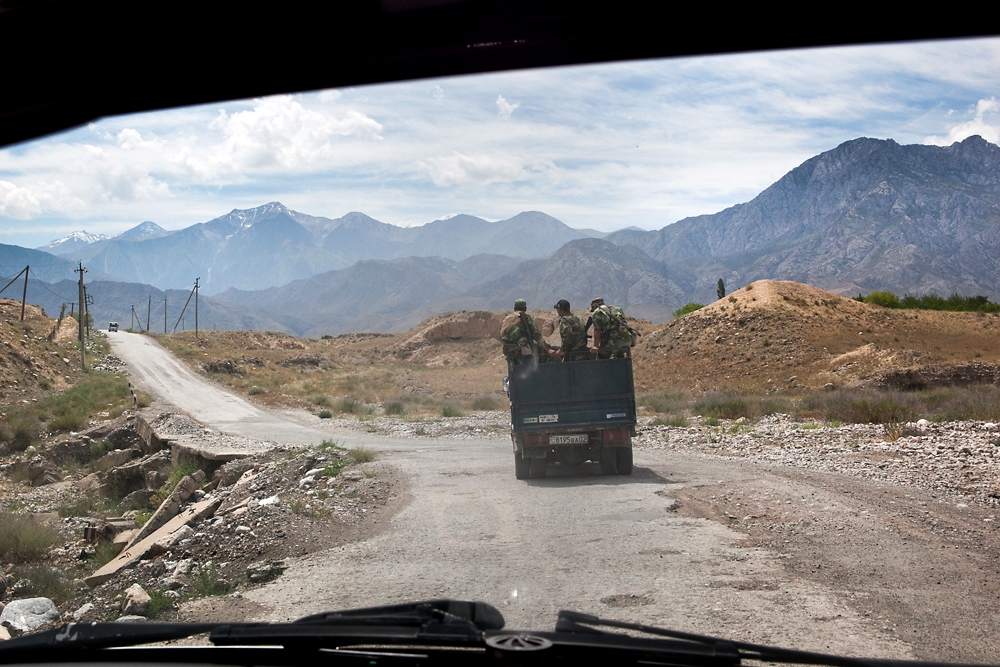 Kyrgyz border guards get a lift from a Tajik truck on a contested piece of land near Ak-Sai, Kyrgyzstan, and Vorukh, Tajikistan. Tensions are running high in the area following a recent shootout between Kyrgyz and Tajik security forces. (Photo: David Trilling)

Authorities in Kyrgyzstan and Tajikistan are each struggling to claim the moral high ground after a January 11 border clash left security forces wounded on both sides. The challenge now is for officials in the two countries to keep populist impulses at bay, experts say.

Some analysts fear the latest incident could spur the militarization of Kyrgyz-Tajik border areas. But most feel the fallout from the firefight, if properly managed diplomatically, is unlikely to fuel a broader conflict in the multiethnic Fergana Valley – as was the case in 2010, when escalating upheaval in southern Kyrgyzstan left hundreds dead.

Still, the situation will require deft handling in both Bishkek and Dushanbe. Kyrgyz authorities allege that Tajik forces dramatically escalated longstanding tensions with a premeditated mortar attack on strategic facilities.

The Fergana Valley is a jumble of twisted and undefined borders shared by three post-Soviet successor states: Kyrgyzstan, Tajikistan and Uzbekistan. In areas around Vorukh and Ak-Sai, the scene of the January 11 skirmish, Kyrgyz and Tajik homes stand in a checkerboard pattern, and citizenship almost always coincides with ethnicity. “We don’t have a border. Whoever is Kyrgyz is a citizen of Kyrgyzstan. Whoever is Tajik is a citizen of Tajikistan. The same goes for the property. If a Kyrgyz lives there, it’s Kyrgyzstan. If a Tajik, it’s Tajikistan,” a resident told EurasiaNet.org back in 2012.

The catalyst for the January 11 clash was an argument over Kyrgyz efforts to build a road in the area. The Tajiks contend the road passes through disputed territory. The Kyrgyz say it does not. Both sides say the other fired first.

Six members of Kyrgyzstan’s security forces and at least two Tajik border guards were wounded in the shootout. Both sides reportedly agreed late January 13 to withdraw troops from the disputed area, though Tajik authorities have not responded clearly to the allegations they used heavy weapons.

Tension in the area had been building for months. Ak-Sai and adjacent villages were scenes of increasingly frequent conflict in 2013, most recently when local Kyrgyz blamed Tajiks for arson at a Kyrgyz teahouse in mid-December. In response, civilians on both sides reportedly blocked roads leading to each other’s villages for several days. Earlier in the year, an argument over Kyrgyz road construction on disputed territory sparked a hostage crisis.

The January 11 clash was rare in that it involved troops on both sides. Often, such incidents involve troops from one country and civilians from the other.

The borderlands of Kyrgyzstan and Tajikistan are fertile ground for conflict, given that area residents have limited access to land and water; these conditions fuel economic uncertainty and interethnic animosities. Weak government also enables tension to fester.

Unlike the violence that erupted in 2010 in the southern Kyrgyzstani city of Osh, the area in which the Kyrgyz-Tajik firefight occurred is far from centers of power, and far from elite rivalries. The open border suits local traders and smugglers. Kyrgyz farmers can export their produce to larger markets in Tajikistan; Tajiks can purchase duty-free petrol.

Until now, the regular incidents around Vorukh and Ak-Sai were too remote to become nationwide issues, said Madeleine Reeves, an anthropologist at the University of Manchester who has conducted fieldwork in the disputed regions.

“Part of the reason that these border disputes haven't escalated (yet) is that the grievances here really are very local and place-specific – this is about very particular questions of livelihood (pasture and water access),” Reeves told EurasiaNet.org by email. “For people outside of these particular valleys – even people in Batken town [about 30 minutes away by car], and still less people in Bishkek – they don't immediately feel threatened by 'The Tajiks' as an ethnic group, still less by Tajikistan as a state.”

This is not to say, of course, that an escalation of conflict is impossible. If Tajiks deployed heavy weapons on January 11, as Kyrgyz officials claim, it suggests the conflict has entered a new, potentially more dangerous phase.

“We believe that this was a planned action by Tajikistan," the AKIpress news agency quoted Kyrgyz Deputy Prime Minister Tokon Mamytov as saying on January 12. An unnamed Kyrgyz government source told Vechernii Bishkek that Tajik mortars targeted strategic facilities like a small dam and electricity substation inside Kyrgyzstan.

Dushanbe has not responded publicly to the mortar-use claims. But in a January 11 statement, Tajikistan’s Foreign Ministry said that during the dispute “a 20-member Kyrgyz border guard detail first hurled obscene language at the Tajik border guard detail and then, without warning, opened massive fire targeting them.”

Long before the January 11 clash, the regularly occurring disputes exacerbated interethnic hostility. On reporting trips to Vorukh and the adjacent multiethnic villages, EurasiaNet.org found local residents hesitant to discuss issues and viewpoints in detail, while being quick to draw stark ethnic profiles of each other: to many Tajiks, the problem is that the Kyrgyz drink too much; to many Kyrgyz, the Tajik population is growing too quickly and taking “our” land. People on both sides complained about harassment from corrupt border troops from the neighboring country.

The lack of a clear border is a complicating factor. Negotiations on demarcating the frontier have been deadlocked for years because “no one wants to take responsibility,” said Raya Kadyrova, head of the Foundation for Tolerance International (FTI), a Batken-based NGO working on conflict-mitigation. On January 10, Deputy Prime Minister Mamytov told journalists in Bishkek that the two sides had not demarcated one kilometer of their shared border over the previous seven years. According to Kyrgyz statistics, of the 971 kilometers dividing the two countries, just over half – or 519 kilometers – has officially been agreed upon.

It is tough to draw a line through multiethnic villages, said Dushanbe-based political scientist Parviz Mullojanov, who added that any agreement must ensure the border remains open and cross-border resources remain accessible to local residents. Mullojanov said he does not see increased conflict happening unless one side starts pushing for a unilateral resolution.

“If either government starts forcing the situation, there might be conflict. Or, if either side starts supporting the demands of their citizens for control over water or land resources, then it may grow out of control,” Mullojanov told EurasiaNet.org.

Offering some hope that escalation will be avoided, authorities in Dushanbe and Bishkek speak with each other regularly. And even though demarcation efforts are stalled, just days before the shootout talks appeared to make some headway: the two sides on January 8 announced the formation of joint border patrols.

Given recent developments, Kadyrova of FTI expressed concern the Kyrgyz will be inclined to move heavier weapons into the region “to demonstrate muscle.” While she emphasized that neither country wants a conflict, the odds seem high of future clashes between poorly trained and poorly disciplined troops. Into this mix, Russia is preparing to deliver over $1.2 billion in weapons to the two countries.

“These [border] issues are so painful, and they won’t be resolved in the short term. So of course clashes will take place,” Kadyrova said.