Kyrgyzstan: Taking power one building at a time

The threat of serious violence hangs heavy over these small farces of impromptu constitutional procedure. 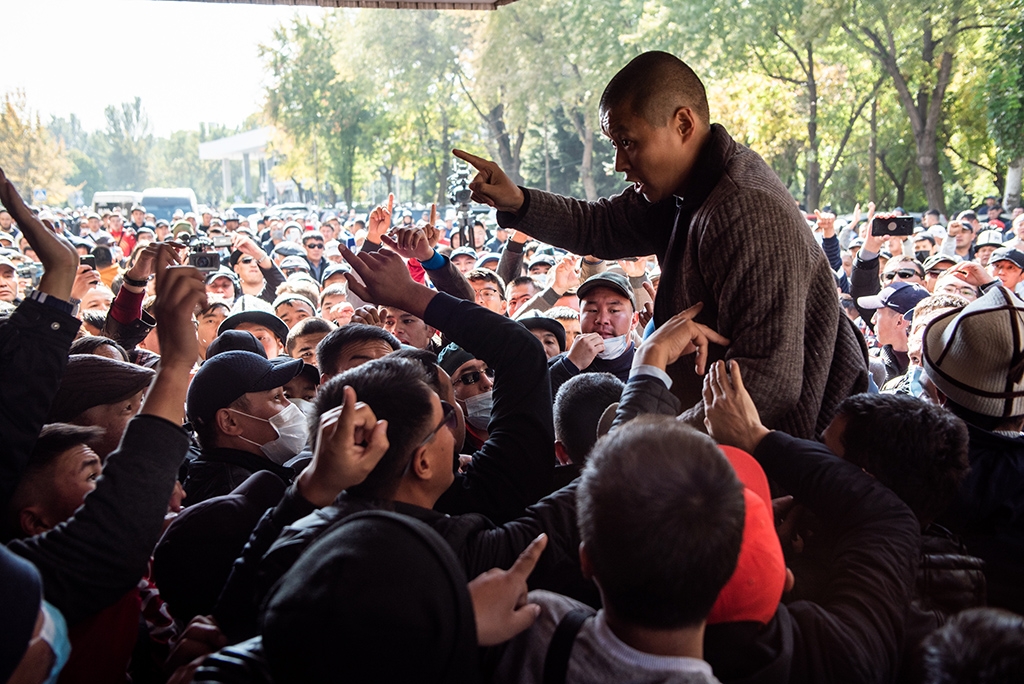 Power in Kyrgyzstan today is about controlling a building. Or a microphone. Or a mob.

The country entered its third day of institutional disorder on October 7 as fierce political rivals advanced competing claims about who should get to run a government, whenever one is formed.

And an argument can seem stronger if it is made in the right premises. The White House, which hosts both the president and parliament, has been rendered unusable by a fire that was set at the height of unrest triggered by the weekend’s tainted elections.

That place’s symbolic authority has instead been reassigned to the Government House, a stolid and impregnable Soviet-vintage construction about 10 minutes away on foot.

But maybe nowhere in Kyrgyzstan is freighted with so much political importance as Ala-Too, the square adjacent to those buildings and the site of two revolutions, in 2005 and 2010, and the starting point for this ongoing turbulence.

That place was, accordingly, picked as the pitching platform by one of the proto-revolutionary camps aspiring to take charge in a vacuum of authority created by the disappearance of President Sooronbai Jeenbekov. 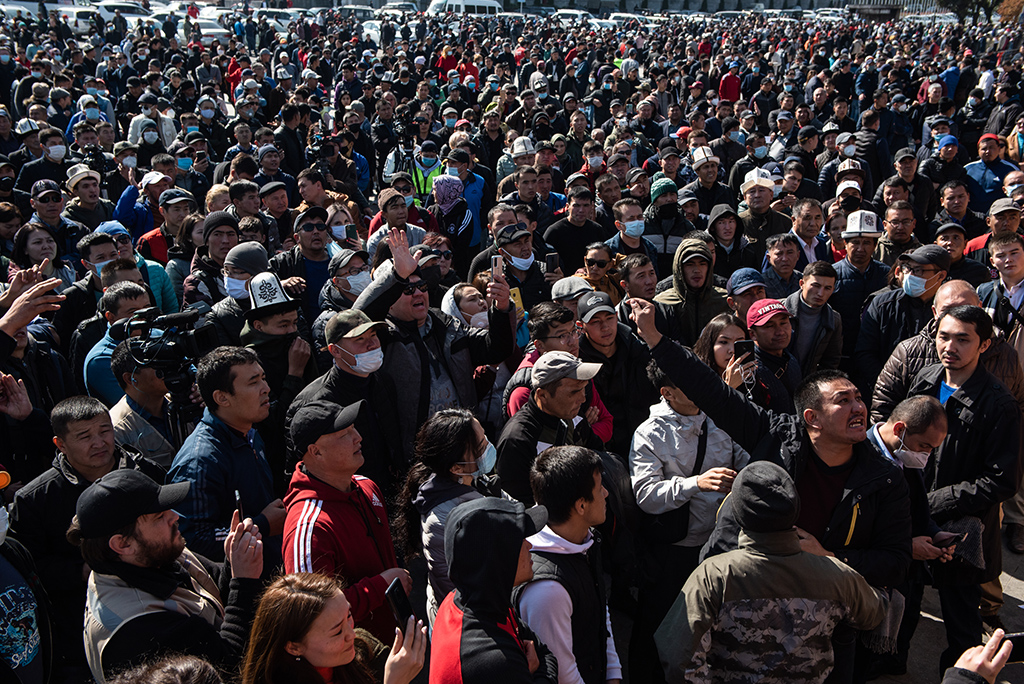 To be exact, the rowdy gang that assembled on the tribune in the middle of Ala-Too determined that Sadyr Japarov, a rabble-rousing former MP who was convicted in 2017 on kidnapping charges and then sprung from prison by rioters earlier this week, not be made prime minister. Japarov effectively appointed himself on October 6 in a strange and secretive meeting of parliamentarians – it is not known quite how many – at a mid-range Bishkek hotel.

“There are people who are not happy that yesterday, some so-called members of parliament picked Sadyr Japarov, who was just sprung out of prison, and his conviction is still outstanding by the way, as the new prime minister,” Seitek Kachkynbayev, a member of the Ata-Meken party told Eurasianet.

Sixteen parties were in the running in the October 4 election and they all have varying and shifting roles in the confounding drama paralyzing Kyrgyzstan. A good many of their representatives addressed a lively audience of a few hundred on Ala-Too, shouting loudly about what should happen next.

Dozens were crowded on the platform at any given time, jostling for space, often tugging the microphone out of one another’s hands, and sometimes climbing precariously on a thin ledge only to be pulled back in an action-filled tableau as if modeled on Michelangelo’s lost Battle of Cascina. A three-line-deep human chain stood behind them to halt the arrival of provocateurs or antagonists. It wasn’t enough to stop members of the populist Chon Kazat party trying, and occasionally succeeding, to barrel through. One of their ranks was only seconds into a speech before he was pelted with empty plastic bottles thrown by listeners and forced to surrender.

The animus for Chon Kazat may stem from insistent talk that their toughs are busily going around Bishkek claiming control over businesses and government bodies. This kind of mayhem has become the new normal since the weekend.

Nobody has proven so enthralling or loud an orator as Ata-Meken politician Tilek Toktogaziyev, an energetic, shaven-headed 29-year-old. This dynamism earned him the approbation of the crowd and a proposal that he instead be put forward as a prime minister-nominee instead of Japarov.

Giving that initiative a gloss of institutional legitimacy required endorsement from any kind of representative body, even one that was self-appointed. The transition-management Coordinating Council confabulated at the start of the week in a rare burst of opposition unity has fallen apart as its chairman has gone to ground and its members never appeared especially comfortable in one another’s presence. A streamlined People’s Coordinating Council made up of only a section of the anti-Jeenbekov coalition was cooked up in its place.

Toktogaziyev was delivered by his burly supporters to a session summoned by this People’s Coordinating Council at the Government House. Getting into that building, however, required negotiating the clusters of Japarov backers itching for a fight.

First Toktogaziyev’s host and supporters tried a western side entrance, blocking the advance of furious Japarovites by their sheer physical presence as they crowd-surfed Toktogaziyev toward a door that proved unresponsive to his furious knocking. They then tried the eastern entrance, where somebody decided to let in Toktogaziyev and his acolytes. Other People’s Coordinating Council participants gradually made their way in later.

After some hours of discussion in the People’s Coordinating Council – an assembly no less self-appointed than Jeenbekov’s hotel cabal, although it did at least grant journalists full access – Toktogaziyev’s nomination as prime minister was sealed. Despite concerns from a security detail that Japarov supporters might manage to hurl stones up a height of three stories, Toktogaziyev relayed the news to his waiting followers below from a window in the room where the People’s Coordinating Council meeting was held.

The Government House is not even a matter of control. Japarov and his ally, Kamchibek Tashiyev, were in the building earlier in the day and sauntered out without incident.

The threat of serious violence hangs heavy over these small farces of impromptu constitutional procedure. Japarov supporters are not bluffing with their intimations of bodily harm.

In person, though, Japarov adopted an insouciant pose, insisting he was too busy with the business of becoming prime minister to worry about what his rivals were doing elsewhere.

“I have been working all morning. But because of the situation, I am forced to worked in another place,” he said, alluding to the Government House. “Some forces are trying to carry out a counter-revolution. I am told that Tilek Toktogaziyev and [Ata-Meken politician] Elvira Surabaldiyeva have gathered people and got into the Government House. But I am the only legitimate prime minister, as appointed by parliament.”

In all the drama, it was hard to pay attention to President Jeenbekov, who assured the public in a video message that he was doing everything possible, from his secret hideaway, to resolve the crisis.

“As president, I am making every possible effort to resolve this crisis,” he said. “To this end, I am conducting personal negotiations with a variety of political forces.” 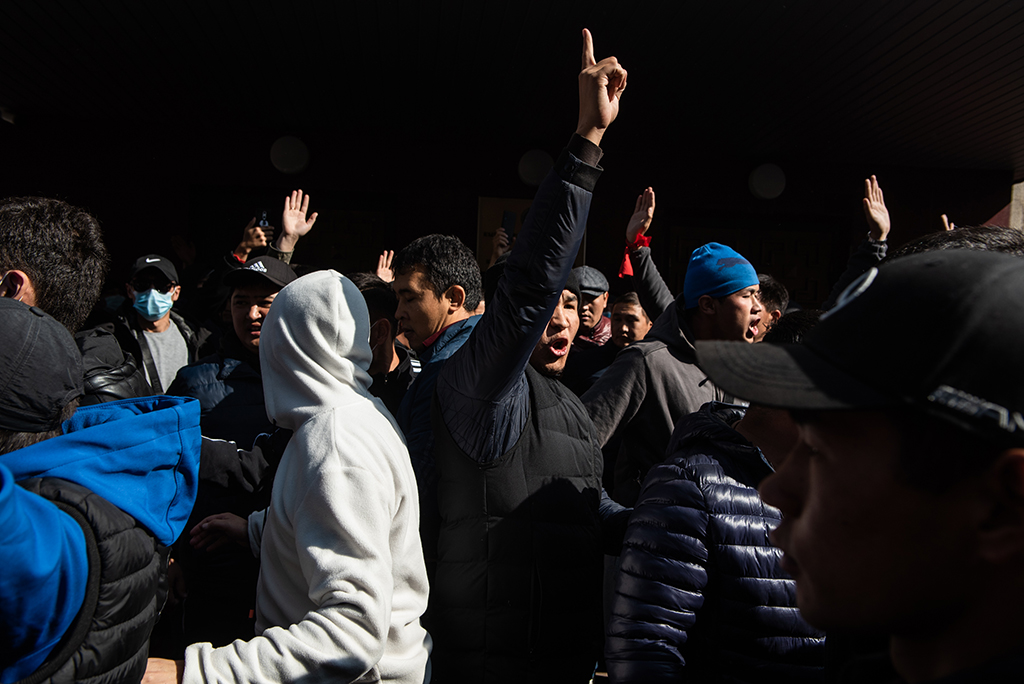 By the evening, the drama had proceeded elsewhere altogether, to a suburban resort on the southeastern edge of Bishkek. That was the appointed venue for yet another secretive conference of assorted parliamentarians. It was mostly by dint of the mobile phone camera-filming of Surabaldiyeva, the Ata-Meken member, and other leaked video footage that the public learned what happened there. It was nothing dramatic in the event. The main outcome was that consensus would be as elusive as ever.

Even after midnight, civil defense brigades comprised of young volunteers were standing guard around the Government House to ensure that no self-declared state official would be able to march in on the back of the mobs.

“They come from downtown, and they come from the city slums. Ten years ago, we might have thought some of them might become looters, but here they are defending their city and their country.”