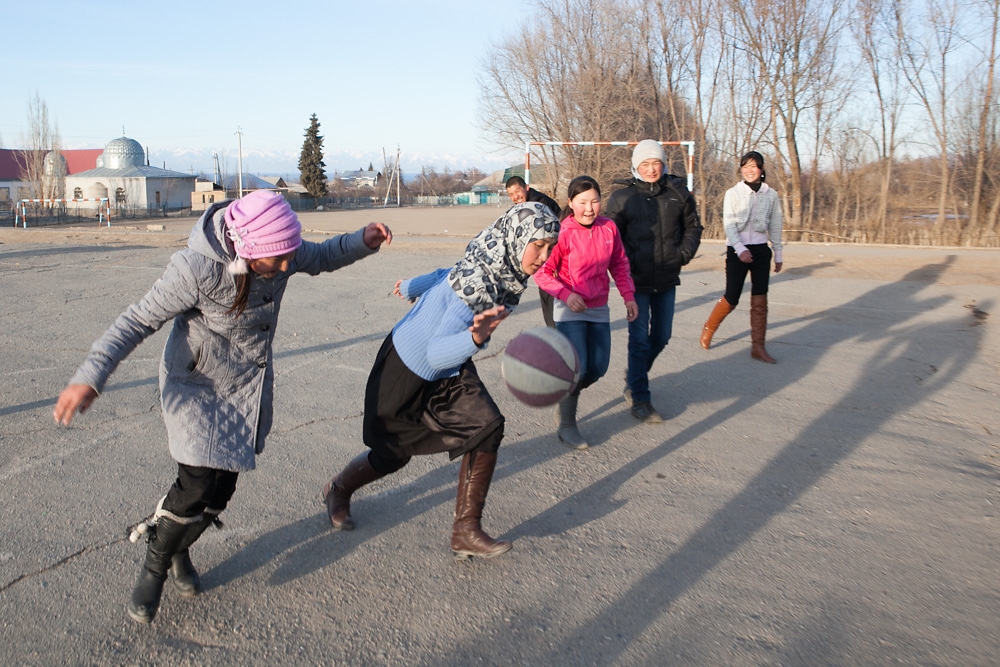 Students play basketball outside a school in Barskoon, eastern Kyrgyzstan, in February 2013. Average teacher wages of less than US$100 is driving many teachers to quit the profession and instead take on better paying unskilled work. (Photo: David Trilling)

Minovar Ruzieva, 38, was an English teacher in Osh until last summer. The mother of four now sells Chinese clothes at a local bazaar. Like many other teachers in Kyrgyzstan, she could not survive on her “scant salary,” so she took unskilled work to make ends meet.

“I quit working as a teacher because I was paid only 3,800 soms [$68] per month,” Ruzieva told EurasiaNet.org, pointing out that a kilo of beef would cost 10 percent of her salary. “That salary is enough to buy one nice dress. I managed to tolerate such miserable pay thanks to my husband’s earnings, which support our family. But I am sure a single mother with a child or two would not be able to survive on such a salary.”

Dismal pay, combined with low social status, is driving younger teachers to leave the profession. In addition, some older teachers who were trained during the Soviet era are retiring, and they are not being replaced. As they go, the quality of public education is plunging, especially outside of Bishkek, leaving a generation of Kyrgyz graduates lacking the skills needed to find well-paying jobs.

“We have 20-to-25-year-olds who cannot even correctly write their names!” said Gaisha Ibragimova, president of the Association of Educational Institutions in Kyrgyzstan, a Bishkek-based lobby group.

Lawmaker Kanybek Osmonaliev, chairman of parliament’s Education, Science, Culture and Sports Committee, says there are about 80,000 schoolteachers in the country, a shortage of at least 2,500.

“The main reason for the shortage of teachers is the low salaries,” Osmonaliev, a former physics teacher, told EurasiaNet.org. “Nowadays teachers get on average 5,500 soms [$99] per month. We need to raise their salaries by at least 30 percent.”

On October 15, at a parliamentary hearing where lawmakers discussed teachers’ salaries, they failed to take action. After a heated debate, including threats to dismiss the entire Education Ministry staff, Erkin Sakebayev from the president’s governing Social Democratic Party concluded “there is no need to take a decision because the government will not fulfill it due to the lack of funds.”

Oksana Kiseleva, an administrator at the Olympus School, a public school in Osh, said the shortage of teachers is a “very serious problem.” If in the Soviet heyday schools had their pick among highly qualified teachers, “now we are forced to take anyone who comes, anyone available, regardless of their skills.”

Because of the low salaries, schools across the country lack teachers of geography, mathematics, biology and the Russian language, Kiseleva told EurasiaNet.org. “Today many teachers work at local bazaars, and basically it is only pensioners who work at schools. A very large percentage of retired teachers still teach,” Kiseleva said. “First of all, they work because their pensions are small, but also because school administrators manage to persuade [teachers to postpone retirement] because we do not have enough.”

The teacher shortage is just one of the causes of the collapse of Kyrgyzstan’s education system. Schools are also crowded and poorly maintained. “Most children do not have textbooks,” the International Crisis Group (ICG) wrote in 2011. The curriculum is “outdated and overloaded […] irrelevant and incoherent.”

Corruption is also a problem, and not just with teachers frequently demanding informal payments from parents or requiring high school students to pay for good grades. Under the former president, Kurmanbek Bakiyev, a state tender for printing textbooks was handed to a company with ties to his son, Maxim, according to the ICG report. The price of textbooks rose, money disappeared, and when the ruling Bakiyev family was chased from the country in 2010, few of the textbooks had reached classrooms.

Local politicians look to foreign donors to fix the problems and are reluctant to accept responsibility, or even acknowledge shortcomings in the system. In 2005 and 2009, Kyrgyzstan scored last in the OECD’s Program for International Student Assessment exam, or PISA; over 80 percent of Kyrgyz 15-year-olds did not meet minimum expectations in literacy, mathematics and science. Rather than strive to make improvements, Kyrgyzstan simply stopped offering the exam.

But for many, the teacher shortage is the most visible problem.

A spokesman at the Ministry of Education and Science, Amantur Akmatov, maintained the ministry is succeeding in filling the teacher shortage, cutting it in half overall the last year, bringing the deficit to 1,200 teachers. But he deferred questions about how the salary gap was funded to the Finance Ministry.

Experts do not trust the Education Ministry’s numbers. Ibragimova, the educational association chief, asserted that Kyrgyzstan lacks 3,000 teachers, especially in science and the Russian language, which is critical since so many Kyrgyzstanis join the migrant exodus to Russia in search of work. These days people “believe that only the biggest losers, people unable to do anything else with their lives, become teachers, and they think it is a shameful and disgraceful profession,” Ibragimova said.