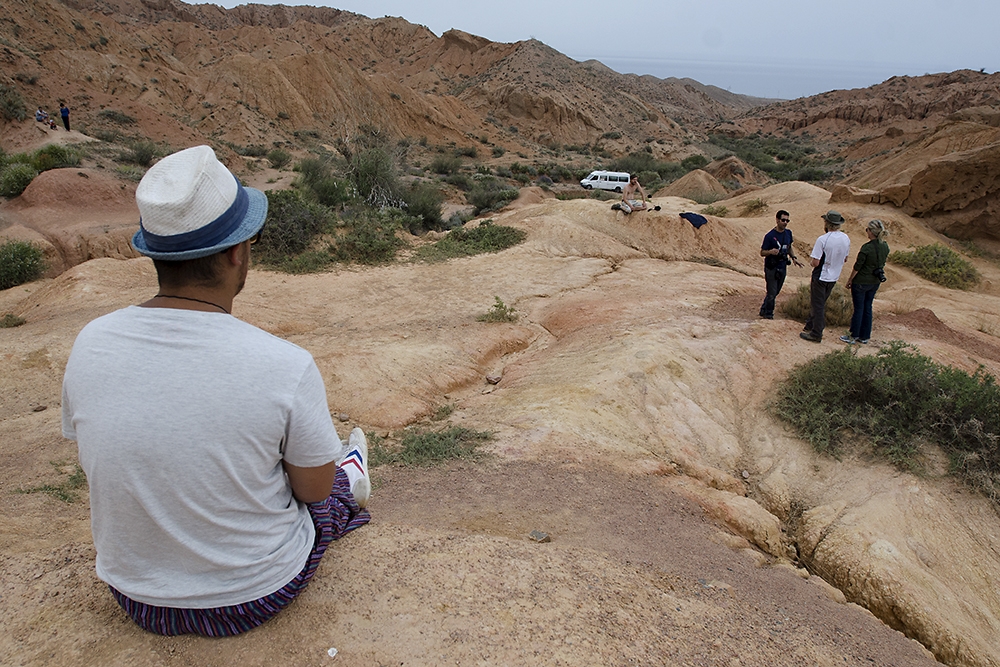 Tourists from the United States, Slovakia and England visit the Skazka “Fairytale” Canyon in eastern Kyrgyzstan south of Lake Issyk-Kul in July 2013. Kyrgyzstan’s potential change in its tourism-friendly visa policy could significantly affect the number of visitors to the Central Asian country, where figures show there was a 20 percent increase in the number of tourists visiting the country in 2013 compared to 2012. (Photo: Dean C.K. Cox)

A steady drumbeat of terror threats in Kyrgyzstan is spurring talk about scrapping the country’s Westerner-friendly visa policy.

Senior officials have expressed divergent public positions on the issue — a hint of infighting behind the scenes — and some of the statements have a vividly Kremlin-tinged flavor.

Kyrgyzstan in 2012 waived visa requirements for citizens of more than 40 economically developed countries for a period of 60 days. The move augured greater openness to the outside world and was hailed as an enlightened step in a region where stringent travel restrictions tend to stymie income from tourism.

A coterie of officials from various branches of the Kyrgyz government now contends that the relaxed rules endanger the country’s security. Geopolitics is further poisoning the mood and there have been some enthusiastic calls for restrictions to be imposed on citizens from Turkey — the new foe of Bishkek’s closest ally, Russia.

Calls for scrapping the visa-free regime began soon after Abdil Segizbaev, the new head of the State Committee for National Security, publicly cast doubt on its usefulness during an anti-corruption-focused roundtable on November 27.

“Now there is an acting visa-free regime with 45 countries. I cannot fail to mention this in view of current threats. [...] Particularly worrying are indications that citizens of Western European countries, who have the opportunity to take advantage of the visa-free regime to visit Kyrgyzstan, are fighting in the ranks of [the Islamic State group],” Segizbaev said.

According to the security chief, “over 200 foreigners suspected of involvement in the armed conflicts in Syria and Iraq” have come into his agency’s “field of vision” in the last two years. He did not elaborate.

Prime Minister Temir Sariyev tried to dispel concerns last week by dismissing talk of a change in visa policies. “Agreements on visa-free travel have been signed between Kyrgyzstan and an array of countries, all of which are economically developed. In connection with recent events in the world, law enforcement authorities are tightening control on public order and on individuals that are of concern. Despite all that, the visa-free regime will be kept in place,” Sariyev told a congress on tourism in the town of Karakol on December 12.

Government figures show there was a 20 percent increase in the number of tourists visiting the country in 2013, after the visa regime with 44 developed countries was scrapped (Japan was eventually added to the list, taking the total number up to 45). Tourism income in the first nine months of that year rose 45 percent compared to the same period in 2012.

Last week, Kyrgyzstan was chosen as the world’s number one “emerging travel destination” for 2016 by New York-based magazine Business Insider — a strong indicator that there is plenty of room for growth of the country’s potential as a tourist destination.

With that in mind, it was surprising that Segizbaev’s views on the visa policy earned support from the deputy head of the Tourism Department at the Culture Ministry. In a December interview with the Kyrgyz service of RFE/RL, Mikhail Kim mused that “Japan, Korea and other countries” could be excluded from a temporary reintroduction of the visa regime. But Kim did also make a “specific proposal” to suspend visa free entry for Turkish citizens for a period of six months.

The reference to Turkey quickly gathered traction among users of Kyrgyz social networks, who have been taking sides and engaging in vitriolic exchanges ever since the late November shoot-down of a Russian fighter jet along the Turkish-Syrian border.

“What is the reason for mentioning Turkey? Have they forgotten again that we are not Russia? Russia is in conflict with Turkey, not Kyrgyzstan,” the administrators of the anti-Moscow Facebook page Kyrgyzstan Against the Customs Union wrote.

Kim’s interview is now the subject of a Culture Ministry investigation after it emerged it did not represent the tourism department’s official position.

That some Kyrgyz officials are so closely adhering to policy positions held by Moscow is emblematic of a broader trend in Kyrgyz politics under pro-Russian President Almazbek Atambayev.

“We do not know where this noise [about the visa-free regime] is coming from, whether it is the Red Square or our own people trying to fulfill some kind of badly-thought-out security plan,” Emil Umetaliev, founder of the well-known local tourism agency Kyrgyz Concept, told Eurasianet.org. “But it is clear who the loser would be — the country.”

Entrepreneurs such as Umetaliev credit tourism with cushioning the blow to the economy caused by the fall in foreign investment in Kyrgyzstan over the last two years. Figures from the National Statistics Committee appear to support this view. In 2014, there was a 32.8 percent increase in investment in capital related to tourism, while the value of services provided by hotels and other places of temporary accommodation rose 23.6 percent against 2013, and was up almost 60 percent from 2012.

“When a developing country has a visa free regime with different countries, it is a symbol of openness, not just to tourists, but to investors too,” said Umetaliev. “The tighter the visa regime, the more likely there are political problems in that country.”

Popular mostly among backpackers with a sense of adventure, as well as aficionados of mountain sports, Kyrgyzstan is no longer the only country in the region to have a relaxed visa policy. Neighboring Kazakhstan has embraced visa-free travel for citizens of 19 developed countries covering a fifteen-day period until at least the end of 2017.

Astana, which tightened up security at airports and halted flights to Egypt after the bombing of a Russian jetliner that claimed 224 lives, has not announced plans to re-impose travel restrictions.

The hawks in Bishkek remain unimpressed. Artur Medetbekov, a former head of the agency Segizbaev now directs, complains that “just anybody” could now come to Kyrgyzstan.

“The idea was nice — that we would improve the national budget and develop tourism. But with the introduction of the visa-free regime Kyrgyzstan has instead become even worse. It did not give us anything,” Medetbekov told EurasiaNet.org.