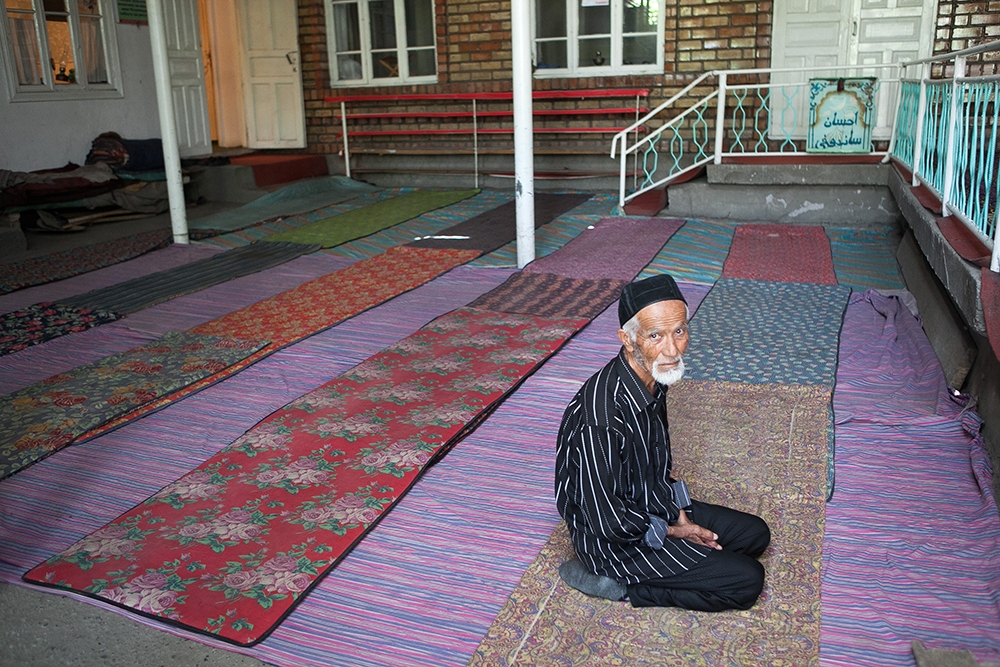 Since October 2014, the Muftiate, a quasi-government Kyrgyz agency also known as the Muslim Spiritual Board, has required all imams in the country to pass tests on Sharia law and Arabic. The Kyrgyz government is concerned that imams, such as this religious leader at a mosque in Osh, could be spreading radical ideas. (Photo: David Trilling)

When Ismoil told his parents that he wanted to attend one of Osh’s newly opened madrasahs and become an imam, his parents thought it a bad idea. The year was 1994, and their dusty corner of southern Kyrgyzstan had only a handful of mosques – a legacy of the Soviet Union’s tight control over religion. His parents worried Ismoil would not earn enough to feed himself.

Twenty years later, Ismoil is a sought-after religious authority whose blessing is often courted by local politicians. He lives comfortably amid a religious revival in Kyrgyzstan.

But now imams like Ismoil – who declined to give his full name for fear of state reprisals – face a fresh challenge. The government is questioning their qualifications, worried that poorly educated imams could either be spreading radical ideas, or are not capable of countering them.

Since October 2014, the Muftiate, a quasi-government agency also known as the Muslim Spiritual Board, has required all imams to pass tests on Sharia law and Arabic. The tests are conducted by a special committee comprising Muftiate representatives, officials from the secular State Agency on Religious Affairs and members of Kyrgyzstan’s Security Council, which is chaired by the president.

The idea is to weed out imams with weak religious knowledge. In 2014, the State Agency for Religious Affairs found that 70 percent of 59 imams surveyed lacked a formal and thorough religious education.

The tests also enable government officials to gain a better understanding of how mosques around the country operate. Officials are concerned that a poor understanding of Islam among clergy could facilitate the proliferation of radical ideas.

At an October roundtable attended by Kyrgyz officials and clergy, Zamirbek Tursunbekov of the State Agency on Religious Affairs lamented the government’s “lack of control over imams.” “Today there is a need to train imams to preach traditional norms of Islam,” Vechernii Bishkek quoted Tursunbekov as saying.

The state has struggled to prove that its anti-radical campaign is not a cover for personal vendettas or ethnic prejudices. In March, police arrested Rashot Kamalov, the leading imam at a popular mosque in Kara-Suu, alleging he was involved in the recruitment of fighters for rebel groups in Syria. Kamalov’s lawyers and supporters say the charges are politically motivated, intended to silence a prominent government critic.

Muslims have long been viewed with suspicion by Kyrgyzstan’s secular authorities. The latest tightening of religious affairs started in earnest at a February 2014 Security Council meeting. Shortly after, police in Jalal-Abad began requiring imams to sign statements certifying they do not belong to radical groups.

The idea of testing imams seems to have wide support, especially in Bishkek and Osh, cities with large secular populations.

“One of the most urgent problems in terms of religion is that many imams have an insufficient religious education,” said Alisher Yusupov, a professor of economics and finance at the Kyrgyz-Uzbek University in Osh. “It is important to improve the quality of education in religious educational institutions. It is also necessary to address the shortage of qualified instructors.”

The tests are proving divisive in a country where few take government proclamations at face value. An imam in a small village near Bishkek, Kyrgyzstan’s capital, complained that the exams have been politicized.

“We had to go through tests in the past. What is different this time is that they [the tests] are more about internal politics. The current Muftiate leadership is trying to stuff the Muftiate with loyal imams while getting rid of those who are tied to previous leaders. Those imams who have connections are allowed to pass; and those who do not are dismissed,” said the imam, who spoke on condition of anonymity citing fear of reprisals.

Solijon, a religious construction worker from Osh, believes ethnic identity is also a factor. “After the 2010 events [ethnic bloodletting that disproportionately targeted minority Uzbeks], many Uzbek imams have been replaced by Kyrgyz imams. Official reasoning is that they failed to pass the tests. But this is a lame reason,” Solijon said.

It is not just imams who are under pressure. Amid official claims that several hundred Kyrgyz citizens have joined militant groups fighting in Syria and Iraq, authorities have begun questioning Kyrgyz citizens who received their religious education abroad.

An Osh-based human rights lawyer who represents suspected radicals told EurasiaNet.org that law enforcement bodies such as the police and GKNB (formerly the KGB) “have been interrogating those who studied and worked in Turkey and Gulf states because of suspicions that they have links to extremist groups.”

Authorities recognize that imams are still badly needed. According to government statistics, there are 2,362 mosques in Kyrgyzstan today, up from about 1,700 in 2011.

Moreover, though Kyrgyzstan has 75 madrasahs – Islamic seminaries – not all graduates become imams upon graduation. Alumni often opt to travel to Russia to work as labor migrants because as imams their salaries are too low, several seminary students told EurasiaNet.org.

In a February interview with Vechernii Bishkek, Bakhtybek Osmonov, a senior specialist at the State Agency for Religious Affairs, the secular government body, admitted that finding qualified imams is a struggle. “Sooner or later, imams must be replaced. But if all of them are dismissed, this will create a vacuum,” Osmonov said.