He tried to tell police they were making a grave mistake. They wouldn’t listen. Now Kazakhstan’s whole narrative about the recent unrest looks weaker. 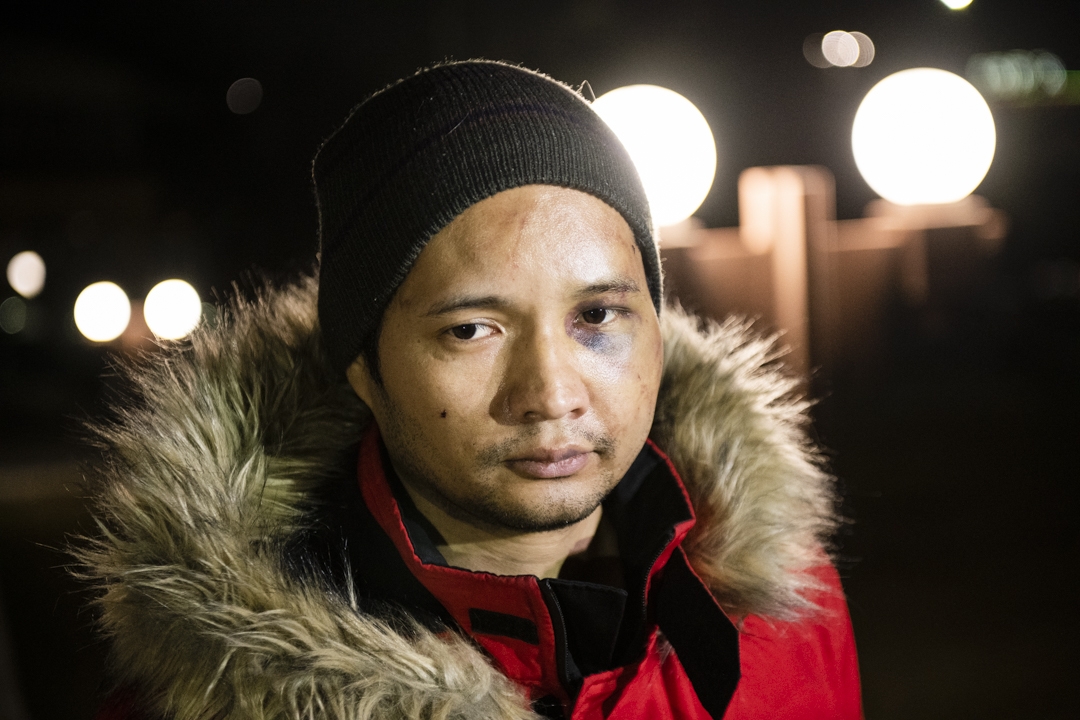 Ruzakhunov giving a press conference in Bishkek after his return. (Danil Usmanov)

Vikram Ruzakhunov crossed the border in a car with diplomatic plates from Kazakhstan into Kyrgyzstan in the early evening, soon after dark had fallen. With that his ordeal had ended.

The day before, on January 9, Kazakhstan paraded him on state television to offer a dazed confession. Ruzakhunov, who is a celebrated and renowned jazz pianist from Bishkek, told police interrogators that he had been paid 90,000 tenge ($200) to take part in the violent unrest that tore through Almaty last week.

“Since I am unemployed, I agreed to this,” said Ruzakhunov, who had scratches and bruises all over his swollen face. “On January 2, I flew to Almaty, they took me to an apartment in which there were also citizens of Tajikistan and Uzbekistan.”

As soon as the footage was seen in Kyrgyzstan, friends, colleagues and relatives erupted in dismay.

Pop singer Yryskeldi Osmonkulov said at a picket held in solidarity in Bishkek that Ruzakhunov had a good source of income and was hardly likely to take part in rioting for $200.

“When I saw it, I couldn’t believe it. It is just madness and nonsense,” Osmonkulov said. “He’s a musician who goes to festivals and gives concerts. Around the New Year season he probably had a performance to give [in Almaty].”

The pianist’s friend, saxophonist Aziz Gaparov, told Eurasianet on January 10 that he had spoken to Ruzakhunov on the phone before he flew out of Bishkek. Gaparov said his colleague sounded as though he was on a routine trip.

“I didn’t ask where he was going. He is a pretty busy man, and I didn’t want to waste his time. But his mother said that he was away for a concert. Aside from music, he is also involved in business and investment. I tried to reach him on [January 5], but I couldn’t get through,” Gaparov said.

That date saw the most intense clashes in Kazakhstan’s commercial capital, Almaty. Kazakh President Kassym-Jomart Tokayev later went on television to say that the violence had been perpetrated by a gang of international terrorists. When Ruzakhunov appeared on television, it appeared likely he could face grave criminal charges.

But Ruzakhunov was perhaps lucky in that the head of Kyrgyzstan’s State Committee for National Security, or GKNB, was quick to intervene on his behalf.

“We know for a fact that Vikram Ruzakhunov is not a terrorist in any way,” Kamchybek Tashiyev told journalists. “All the security bodies and the Foreign Ministry have issued notes to say that Ruzakhunov cannot be charged for terrorism. We are in touch with our Kazakh colleagues. We are not just sitting around.”

Upon return to Kyrgyzstan, Ruzakhunov thanked the Kyrgyz government for their intervention. He said he had gone to Almaty for business but was stuck in an apartment between January 4 and 6, just as the turmoil was escalating. Finally, once his food supplies had run out, he decided to try and make a dash for the border, Ruzakhunov said.

The swelling and scratches on Ruzakhunov’s face have sparked speculation that he was tortured into giving a confession, but he denied it was the case. He said that the injuries were the result of a “rough detention” by military personnel as he was trying to make his way to Kyrgyzstan.

“What you see on my face and so on, that will pass. I am just happy that I am alive and healthy. I will need some time to recover and return to my artistic work,” he said.

Ruzakhunov said the reason he offered the bogus confession was that he hoped it might be his ticket out of custody, since police would listen to no other reasons.

“The [security forces] have a lot of work to do. It is a difficult situation. They had problems with the internet, and I kept on telling them that I am quite a famous musician,” he said. “I had heard once that if you give a confession, there is a chance you can be deported.”

There is now some concern that the Kazakh authorities are detaining suspects at liberty with only the flimsiest pretexts. By January 11, almost 10,000 people were in custody in connection with the unrest. This figure is believed to include a significant number of foreign nationals.

Ruzakhunov said that he was sharing his cell with another five citizens of Kyrgyzstan. The report on Kazakh state television about his arrest showed a table laden with automatic rifles, bottles of vodka and a pile of Kyrgyz passports. If all the detentions were conducted as arbitrarily as Ruzakhunov’s, the elaborate terrorism narrative woven by the Kazakhs may quickly collapse into dust.

There was much indignation in Kyrgyzstan when President Sadyr Japarov on January 9 appeared to offer justification for the targeting of his fellow citizens by Kazakh soldiers and police.

“There are many of our citizens working in Kazakhstan. It is possible that some among them took part in the demonstrations,” he wrote on Facebook, shortly before his office announced he was set to embark on his New Year holidays.

Kazakhstan is the second most popular destination after Russia for labor migration from Kyrgyzstan. In 2019, there were 30,000 Kyrgyz nationals recorded as living in the country.

Uncertainty persists over the fate of another named Kyrgyz national in detention, Zakir Yuburov. When Kyrgyz social media first identified Ruzakhunov, the Kazakh authorities quickly responded with denials and insisted that the man shown on television was actually Yuburov. They eventually had to backtrack, but Yuburov’s fate is still unknown.

Yuburov’s relatives have told the media that he lives in Almaty and works selling kitchenware at a local market. His brother, Takhir, told Bishkek-based news outlet Kaktus that Zakir Yuburov was expected in his home town in Kyrgyzstan on January 7, but that he was detained at the border checkpoint. Since then, he has not been heard from, Takhir said.

“There is no way that my brother could have taken part in any demonstrations in Kazakhstan,” he said.

The Kyrgyz Foreign Ministry said it had reached an agreement with Kazakhstan on the immediate release of Yuburov and others, but as of January 11, no progress had been made.