Kyrgyzstan: The Ponzi that Broke a Village

"They purposely pick rural areas, where people are not so savvy." 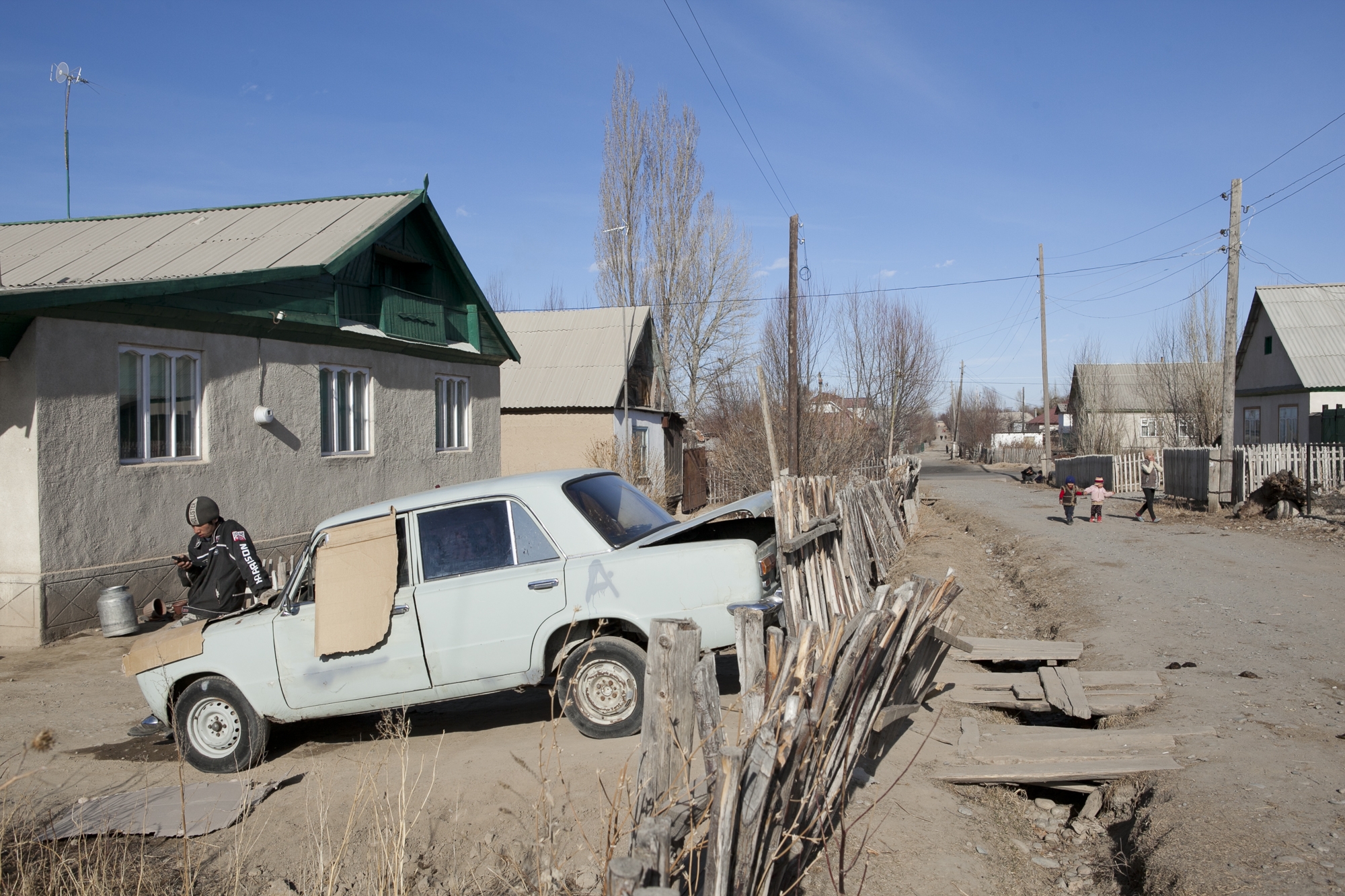 The southern shore of Lake Issyk-Kul is an isolated, impoverished region. (Photo by David Trilling)

When Sattylyk first arrived in Boz Beshik, a little village poised scenically on the southern shores of Kyrgyzstan’s Issyk-Kul Lake, the residents were delighted.

The Kazakhstan-based creators of the organization adopted the cloak of charity workers, promising people a way out of mere subsistence. To an untrained and uncynical rural community, the promise was too good to turn down. A more seasoned eye would have seen the classic get-rich-quick Ponzi scheme for what it was.

Kymka Suyumbayeva, 65, a member of the Boz Beshik village council and a school teacher of 30 years, was one of the first to get involved. Last February, Suyumbayeva was invited to attend a Sattylyk presentation in Karakol, the nearest large town, around an hour’s drive away. Her first impressions were positive.

“I thought this was a good company. It operates in seven countries, including Kazakhstan. They are doing some useful work and now they have come to us, to help develop the Issyk-Kul area. And it is true that we have women here sitting at home doing nothing and who have no jobs. We have no jobs in the village. Just land and cattle,” Suyumbayeva said.

For their $500 seed money, program participants – or “partners,” as they were called in the constellation of pseudo-investment terms deployed by the company – bought the right to a unit of investment known as a “wallet.” Anybody able to recruit another 14 people earned the title of “millionaire.” The amount of money involved would indeed translate into millions of tenge, the native currency of Sattylyk’s Kazakh founders.

Brimming with enthusiasm from the Karakol seminar, Suyumbayeva invited Sattylyk to her village and convened a public assembly at the school building.

“They took us out into the street, took photos, handed out gifts they had brought with them. People were so happy and immediately 16 of them signed up,” she said.

At the start of May 2017, Suyumbayeva and her husband bought their first wallet. Sure enough, by July, they had received a return of 270,000 som. Following a ceremonial handover of the money in a local restaurant, interest spiked. Teachers from the village school formed groups of three and pooled their monthly salaries to buy wallets. Shepherds sold yaks and sheep, farmers used up all the money they had made from selling their fruits and vegetables.

People came to company representatives with hard cash in hand. Their names were written down in notebooks and the money was sent off to Kazakhstan.

But the reverse flow of money was quick to dry up. By September, this pyramid arrangement had already collapsed.

Sonya Shamyrkulova and her husband bought three wallets at the outset. Shamyrkulova, a pensioner, got the seed funds by taking out a loan with a microcredit organization.

In less than a month, they recouped almost $400 per wallet, an amount just shy of the initial investment. The speed with which the money was being returned to them persuaded the Shamyrkulov household to commit even further, which they did by agreeing to the company’s suggestion they parlay yet more funds into three more wallets.

“We thought that now we had three wallets, we would be able to finish renovation work on the house. We thought that we were seeing some people come out of this thing as millionaires, but that we were going to be trillionaires. We needed to pay in another 21,000 som, so my husband and I got together and sold our jewelry and rings to the pawnshop,” Shamyrkulova said.

Dreams of riches rapidly turned to dust. Shamyrkulova’s husband has had to go to Russia to earn enough to pay off loans they racked up. All of his pension money also now goes to settling debts.

“Every time we go to the [investor] general meeting, they tell us, that today or tomorrow, any time now, they are going to give us our money back,” she said.

Kumar Kurmanbekov, deputy head of the Interior Ministry department for the Issyk-Kul region, is leading the investigation into what amounts to little more than a Ponzi scheme, whereby new investors provide funds to disburse to old investors until the whole scheme inevitably falls apart. Kurmanbekov said the police have received more than 300 complaints about Sattylyk. And the defrauded parties come from all around the region.

"Many of them refuse to write formal complaints. They just spit,” Kurmanbekov said. “They handed over their money, but they cannot be bothered [to file a statement].”

The police are still trying to work out just how many people have been taken in by the scheme, but at current count, they know of 1,000 investors from villages along the lakeside. Interior Ministry officials filed a fraud case on January 22.

Despite that ongoing criminal probe, Sattylyk continues to take money off people around Issyk-Kul.

“We have told them they are being cheated, but they say: ‘No, we’re certain this can work, that we can make money this way,’” Kurmanbekov said.

Sattylyk is registered with the justice ministries of Kyrgyzstan and Kazakhstan alike as a cooperative dealing in “bulk trade of a wide array of goods.” Even Zhannatkan Attokurova, company director at Sattylyk, freely admits that description is inaccurate. Instead, she prefers to describe the enterprise she runs as a “charitable project” and says that nobody is “forced” to join.

Nobody has been formally charged. Law enforcement officers involved in the case say the fact that the company is based in Kazakhstan and that its founders live in Almaty is complicating their work.

Dinara Nazarkulova, a rights activist, said that the government needs to pay closer attention to the registration of these companies.

“They purposely pick out rural areas, where the local population is not so savvy. They don’t deal in actual goods and all their transactions are processed exclusively in cash,” Nazarkulova said. “This financial pyramid needs to be closed as soon as possible. Our Justice Ministry gives out licenses without even looking at what the company actually does.”

Even if there were to be a prosecution, history suggests the likelihood of money being returned is next to nil.

In 2003, Kyrgyzstan’s Interior Ministry filed charges of large-scale fraud against the management at Renton Group, a failed loan securities scheme. More than 2,200 people lost money that time around. In 2008, then-Prime Minister Igor Chudinov signed a decree requiring all victims be reimbursed, but the defrauded continued mounting rallies for years without result.

When she met with investigators, another Sattylyk representative, Nurai Busurmankulova, suggested that perhaps participants in their project could sell on their wallets to people living in Russia.

The idea did not go down well.

“They will defraud our compatriots in Russia, but it will be harder for people over there to get together to register their unhappiness, as we have,” said Nargiza Murzaliyeva, another defrauded resident of Boz Beshik.

Even in the highly unlikely event of some money being recovered, personal relations in the village are unlikely to return to normal any time soon.

“Before, we lived peaceably, we were always helping one another. Now discord has broken out and everybody is arguing between themselves, trying to find out who is to blame and who brought the pyramid here in the first place,” Murzaliyeva said.

When Suyumbayeva got her windfall as an earlier adopter, she quickly turned around and bought more wallets for her children. Even though her family is now among the victims, she feels ashamed.

“People are very bitter about all this. They see me … and say: ‘What kind of an organization did you bring to us?’ But I didn’t know it was going to turn out this way. I never intended to deceive anybody. I believed in this myself,” Suyumbayeva said.