Kyrgyzstan: The saga of small farmers battered by the drought

Water shortages have inspired all kinds of dark rumors. 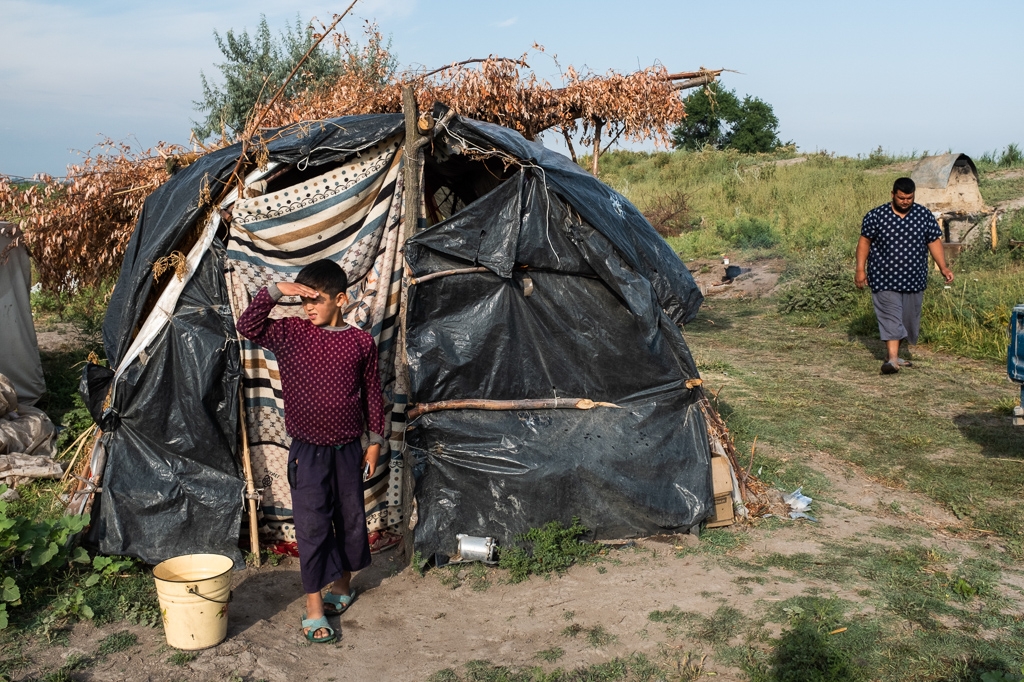 Daniyar Pazilov and his family spend the summer in tents on rented farmland.

It was 35 degrees Celsius outside. A hazy mirage shimmered over the hot summer soil in Petrovka, a village in the northern Kyrgyzstan region of Chui.

A sharp bout of torrential rain had soaked the fields a day before a recent Eurasianet visit, but not a trace remained of the moisture. The only evidence the downpour had happened were the two wet tents in which 35-year-old Daniyar Pazilov had been living with his family for the last four months.

Day and night, Pazilov stood guard and looked on hopefully, but with ever-growing alarm, over his fields of grain, vegetables and fruit. His home is a 12-hour drive away, in the southern region of Uzgen. He brought his wife, two sons, aged nine and 10, and his 34-year-old brother along with him.

One tent is just branches and plastic sheeting. The other is of Soviet vintage. Pazilov’s wife cooks the meals in one giant pot over a fire. There is nowhere to wash, and the toilet is just a plastic awning. 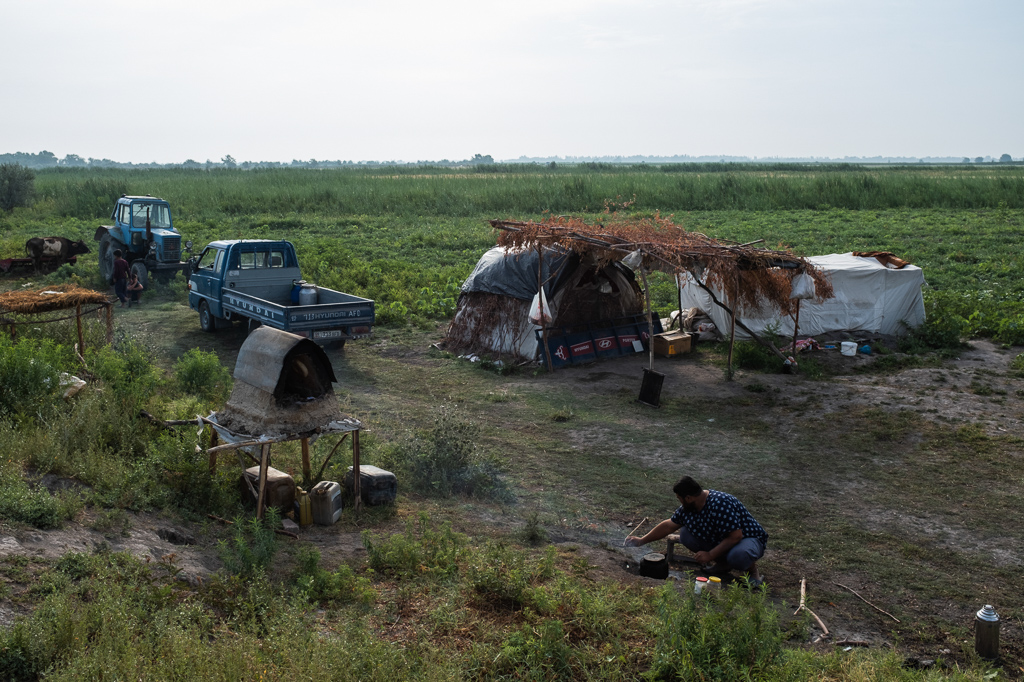 Last year, the inconvenience of this hardscrabble camp paid off. Pazilov made $11,000 off his watermelon crop. This time around, he rented more land, assured by the owner that nothing could go wrong.

He sowed seasonal vegetables and, again, watermelons, across the rented 40,000 square meters. He has not stopped regretting it since. Summer has been bone-dry. Investments are going up in smoke. Farmers like him have mounted protest pickets to urge the government to help, but it is no use.

“How am I going to cover my expenses? The watermelon won't even grow. […] They’re coming out all crooked because of the lack of water,” he told Eurasianet. “They promised us water, and so I planted them. My patience is at an end.”

Sure enough, watermelons at the bazaar can weigh anywhere between 10 and 15 kilograms. Pazilov's look like softballs. 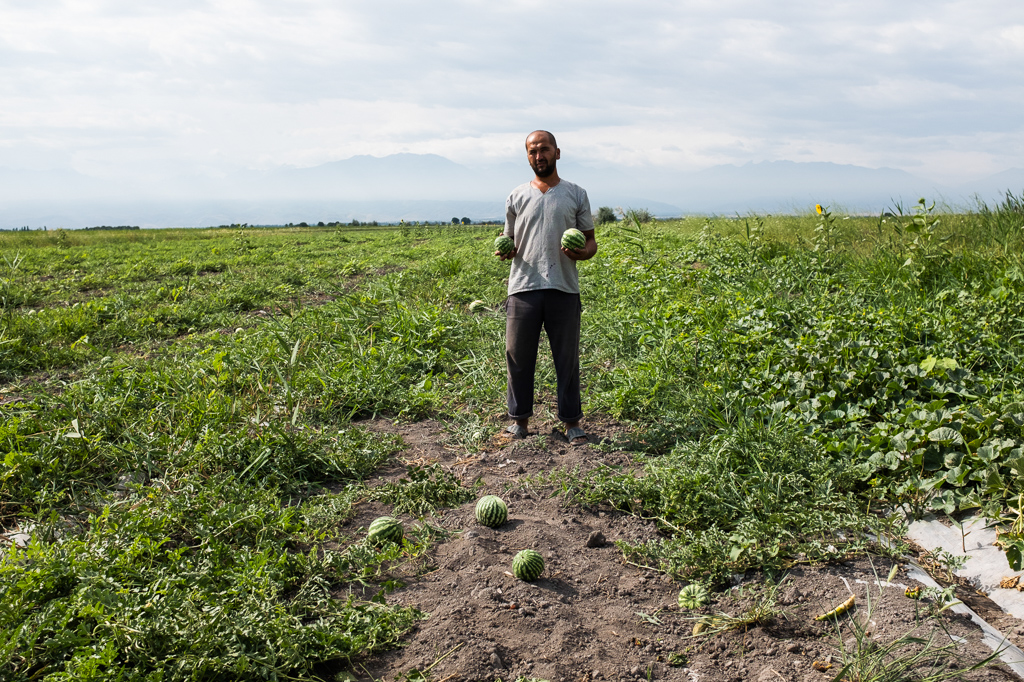 In Petrovka, as in many villages of the Chui region, water comes from the Great Chui Canal, the BChK, which is composed of a trio of canals radiating across northern Kyrgyzstan. Water is doled out among villages by the State Water Resources Agency. The last mile is overseen by another body, the Water Users Association.

Authorities set aside 600 liters a second for the 50 square kilometers of fields in Petrovka. That is a scant amount, farmers say. 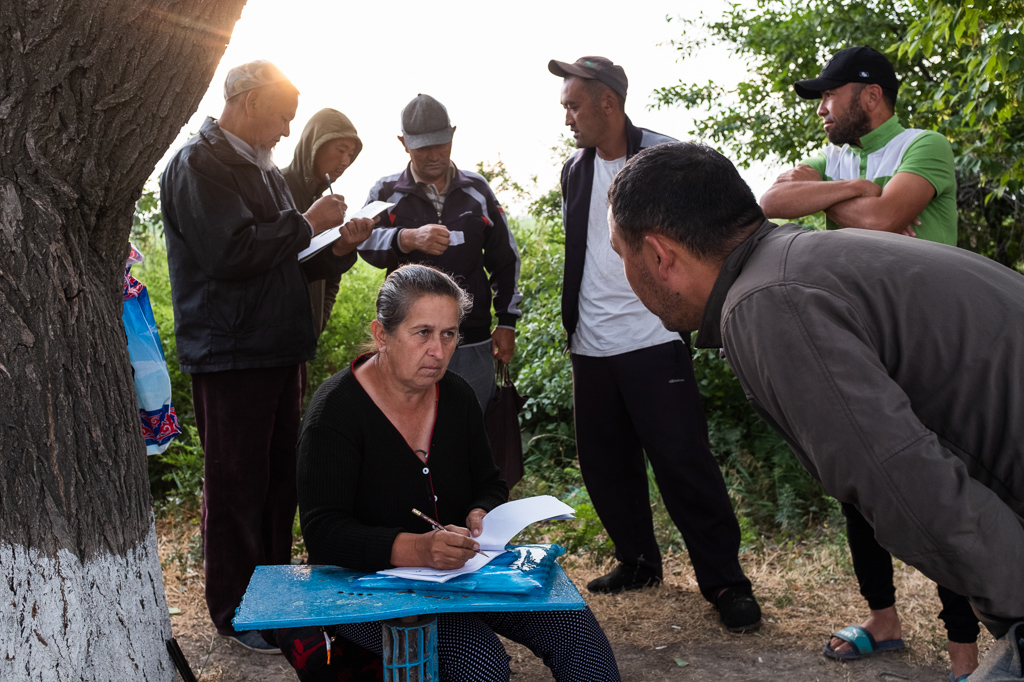 This is how it works in practice: The 20 or so farmers cultivating the area muster each morning at a water distribution point. They are entitled to as much water as they managed, at some earlier stage, to buy from the Water Users Association. Coupons in hand, they wait. Once their turn is up, getting water to their fields entails opening the corresponding channels by hand. 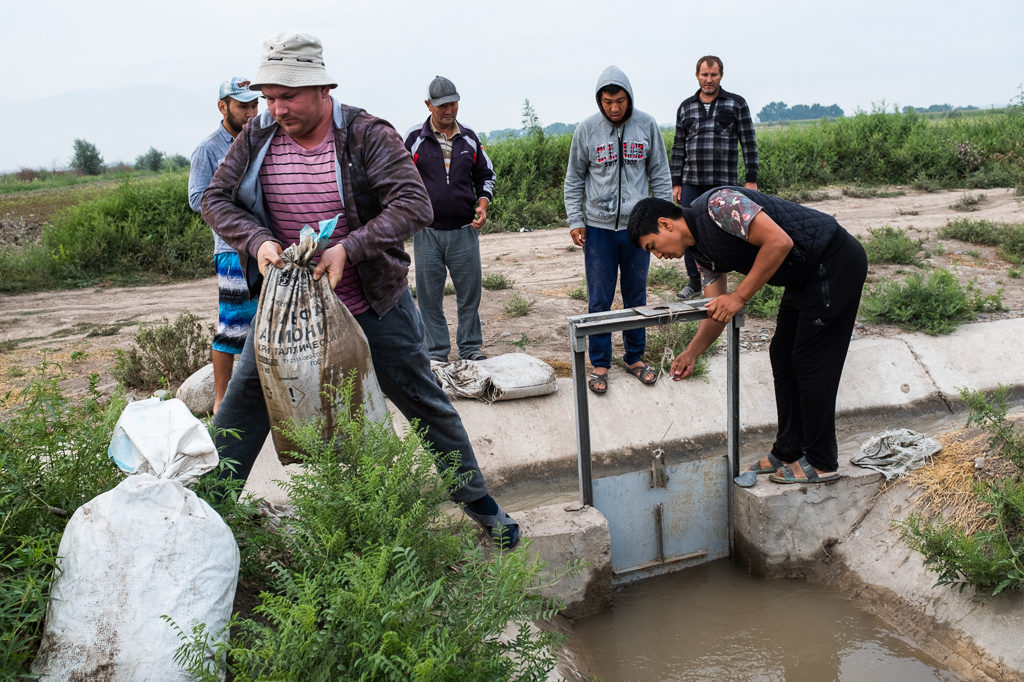 Conversation among the group is in a blend of Kyrgyz, Russian and Dungan. Sleepy and breakfast-deprived, the farmers grow increasingly agitated as they wheedle for more water and complain about how they suspect somebody of appropriating their share. 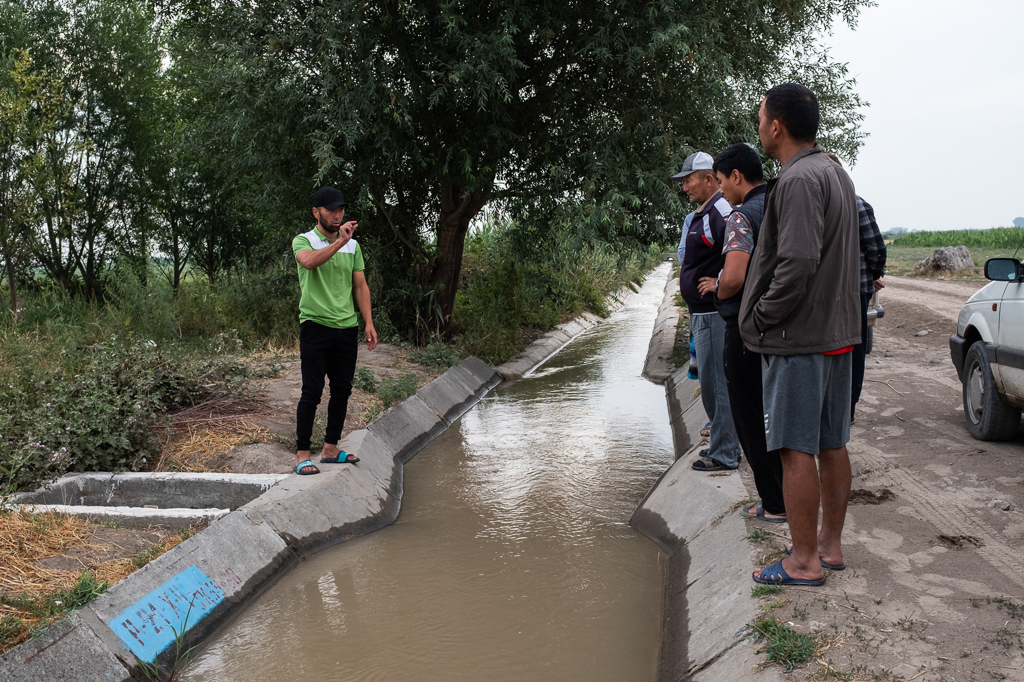 Pazilov said he had been turning up every morning. He was able to get a hold of three water coupons, for which he paid 2,000 som ($23). But he says water was only delivered to his field once. He blames foul play by representatives of the Water Users Association for this situation.

His field is, in any case, about one kilometer from the water distribution point. By the time it gets to him, the 20-liter allocation has usually dwindled to a weak trickle, enough to moisten a couple of rows.

Was he cheated? Hard to say. Even in normal times, trickery abounds as farmers try to get access to precious water. Pazilov willingly admits he is no angel on this front. He paid under the table last year to get more, but now he has no money to pay such inducements.

“I don’t know what more to do. If I stay, there is not going to be water anyway. But if I leave, it will be heartbreaking,” he said. 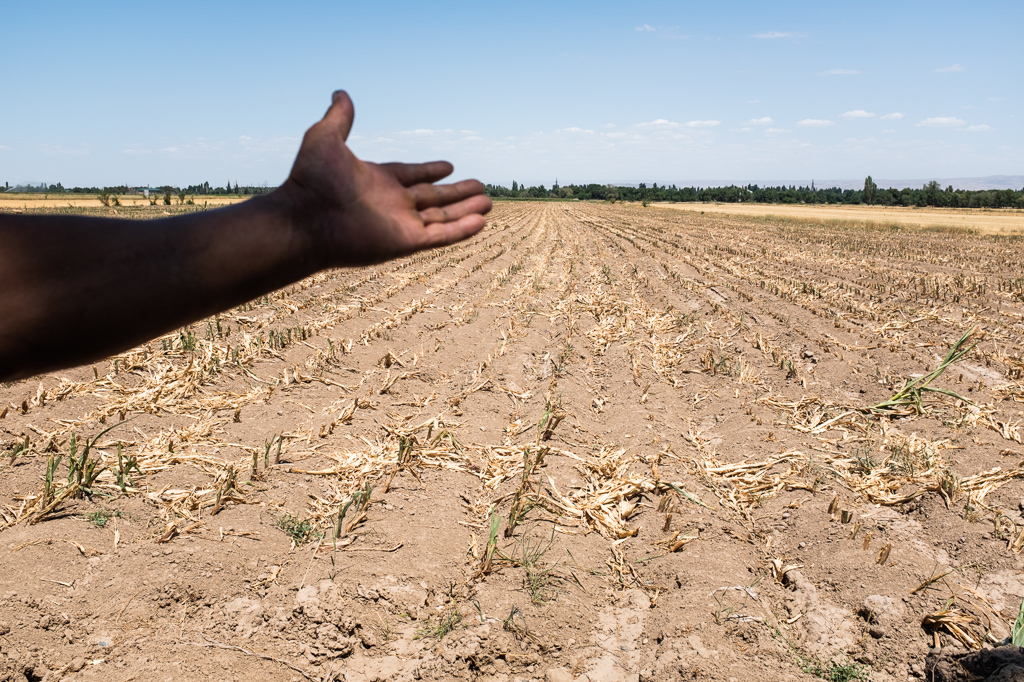 To get through the worst of times, Pazilov's wife has got a job harvesting watermelons on someone else's plot. That earns her 600 som ($7) daily. Pazilov does odd jobs too.

Next month, the family will return to Uzgen. If the watermelons don’t work out, Pazilov will go to Russia for work. In the worst-case scenario, the family will have to rely on the pensions their parents receive and wait till the next planting season.

Water shortages have inspired all kinds of dark rumors. One has it that the authorities have been secretly selling water to Kazakhstan, which has also endured a severe drought this year. Kyrgyzstan has under a 2000 agreement been sending 42 percent of the water that flows through the BChK to Kazakhstan in return for the latter underwriting the cost of maintaining irrigation infrastructure. The suggestion is that the amounts being diverted are greater that what has been agreed. 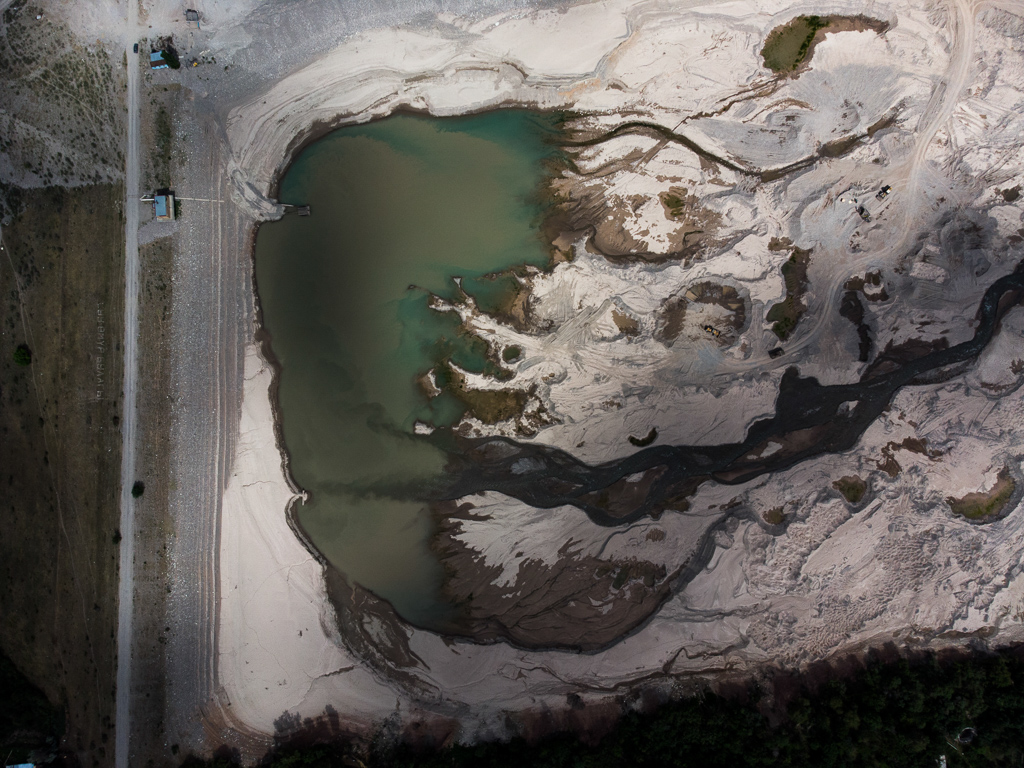 Akylbek Sulaimanov, the head of the Water Resources Department at the Agriculture Ministry, commented on these allegations back in June. The reality is, he said, that Kyrgyzstan is giving Kazakhstan less than it should.

Sulaimanov instead blame farmers for insisting on sowing moisture-loving crops.

He may have had people like Kanat Tokurov in mind.

Tokurov, whose fields are next to Pazilov’s, has a decade of farming experience under his belt. He planted clover and maize. The crops should go toward feeding his 100 or so heads of livestock. 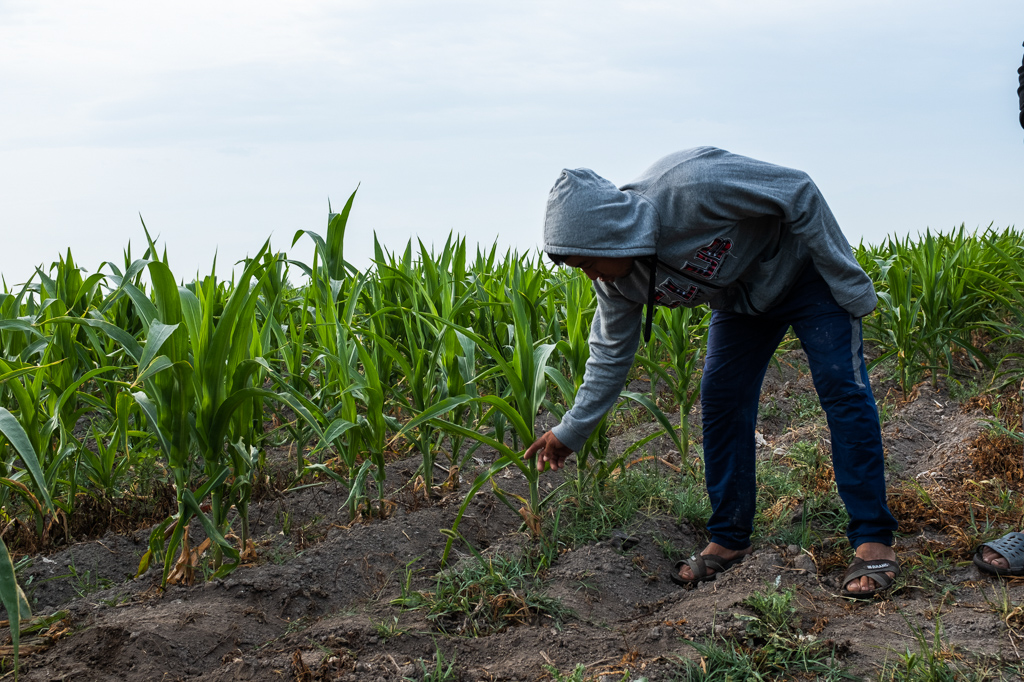 Tokurov denies that he was ever warned his crops could be hit by drought. When Eurasianet visited, his maize should have stood almost two meters tall and been ready for picking. Instead, it stood at around one quarter of that height. Standing next to the cans of chemicals that he poured into soil in the hope of retaining moisture, Tokurov said he may be forced to sell his livestock or spend more money to save them.

“If the maize doesn’t grow, I will have to give it all up and buy feed from other people,” he said. “My labor just isn’t justified.”

For all Sulaimanov’s censoriousness, the larger problem is structural. Literally.

Tilek Toktogaziyev, who served briefly as an agriculture minister in the months after last year’s political tumult, told Eurasianet that the aging irrigation network loses up to 400 million cubic meters of waters per year from the Great Chui Canal. 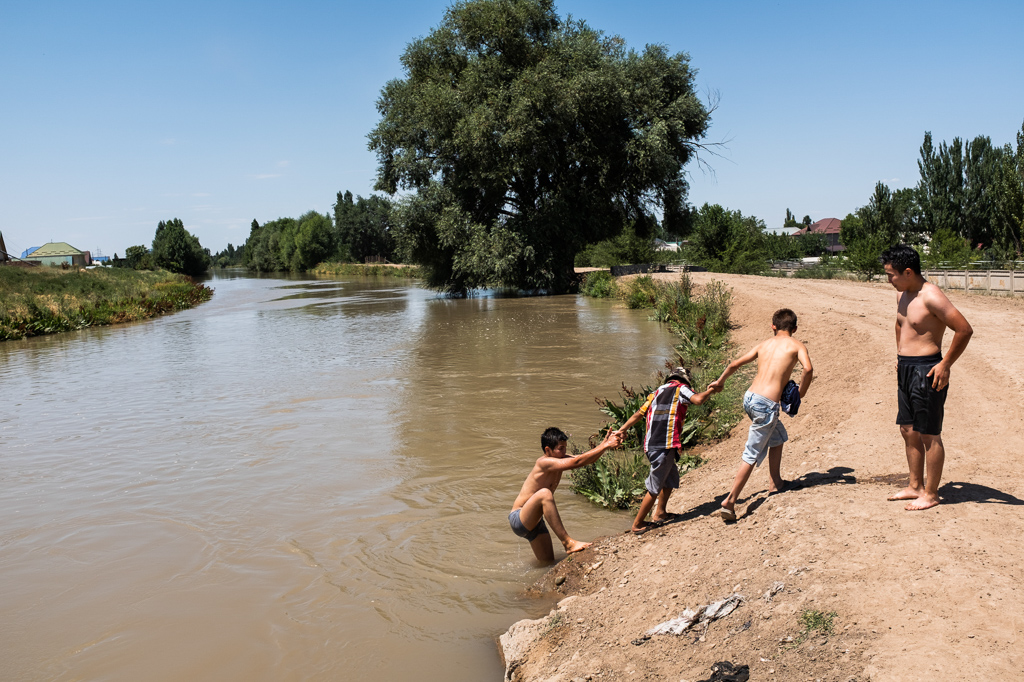 At the micro level, Toktogaziyev told Eurasianet, management of the channels that deliver water over the last stretch should be modernized, to avoid corrupt practices and fiddling that causes so many bitter arguments among farmers.

“The water distribution locks need to be digitized, so they are not having to be manually opened and closed,” said Toktogaziyev. “[Also], the canals need to be sealed with concrete, so the water does not seep away through the soil.” 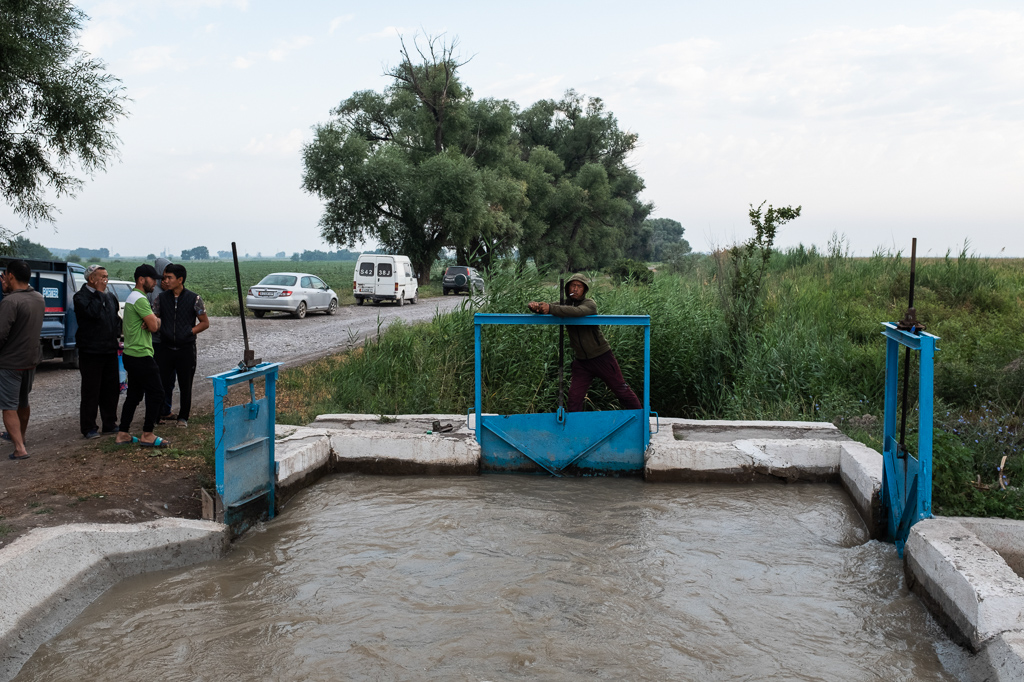 Atalyk Group, an agro-industrial holding company with fields not far from those small-time farmers in Petrovka, has coped with the drought by investing in sprinklers. People toiling on their diminutive patches of field can only look on with envy. 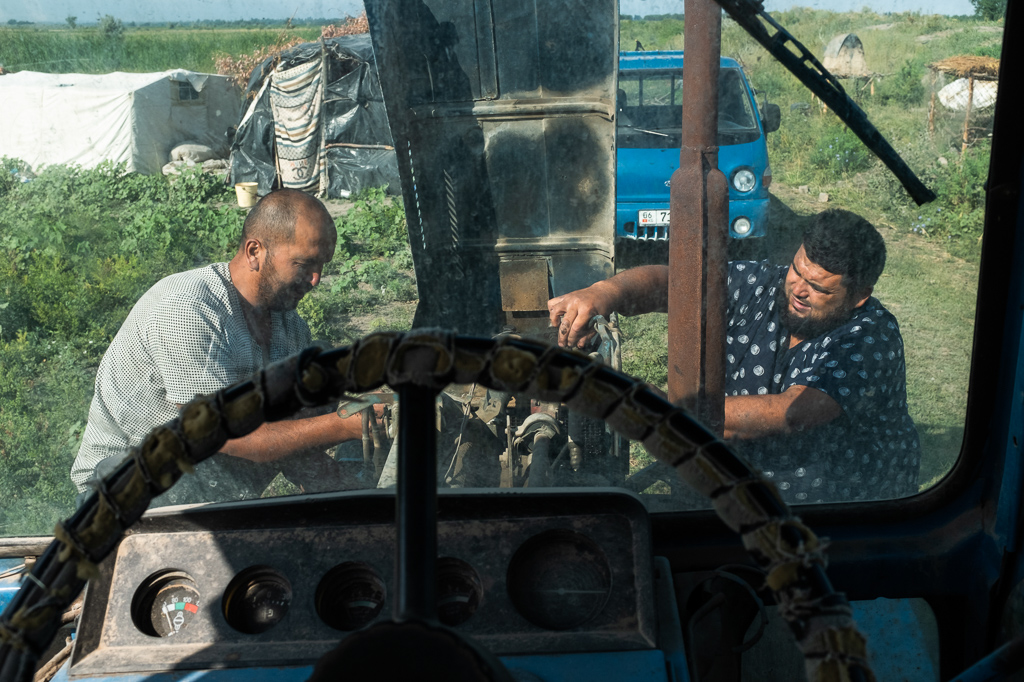 But Toktogaziyev argues that the small farmers could get their hands on the same equipment if they formed cooperatives. This would also help avoid conflicts, he says.

“This would make it possible for initiatives not to be top-down, but the other way round, so that farmers would be in a better position to ask something of the government,” he said.