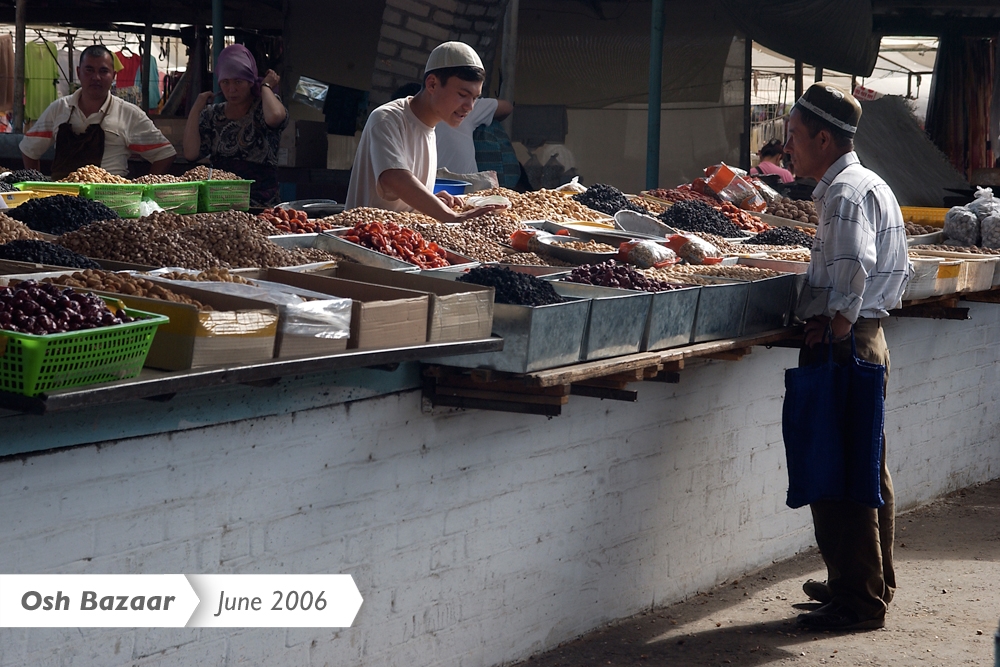 A shopper wearing the typical black Uzbek doppa visits a vendor of dried fruits and nuts. 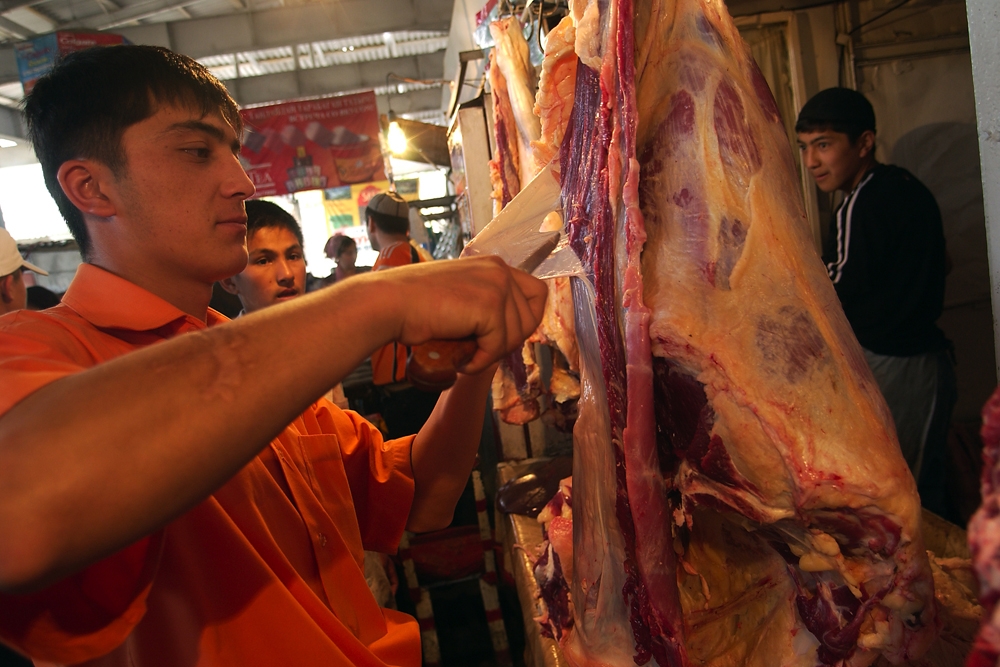 Butchers slice apart lamb and beef carcasses in a section of the market devoted to fresh meat. 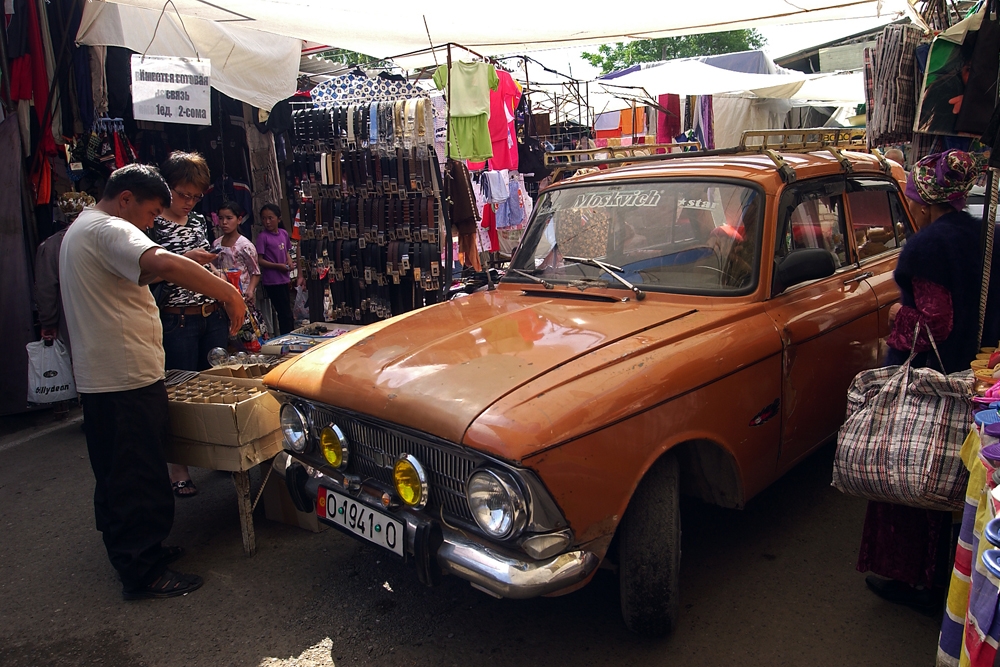 A car inches its way through the narrow passages between stalls. 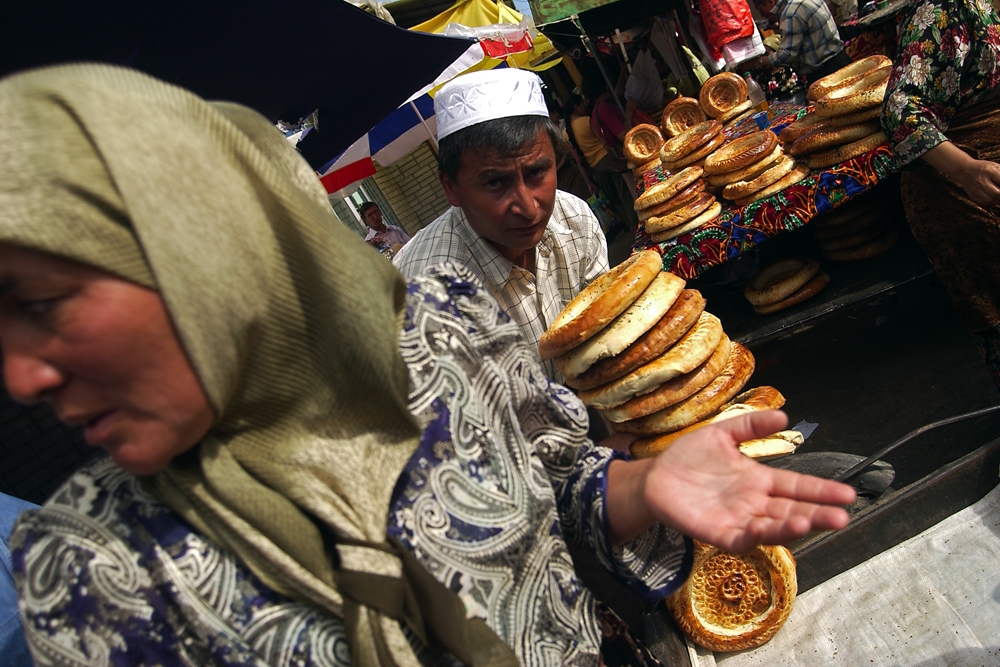 A man stacks flatbreads onto a cart he will pull through the market in search of customers. 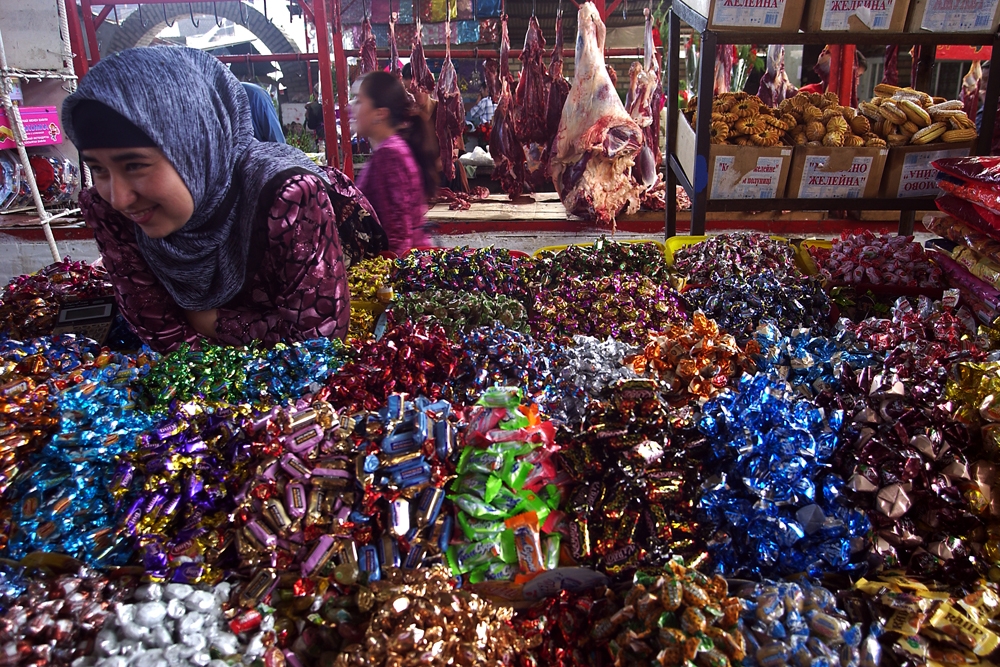 A woman awaits customers in need of varieties of chocolates and candies. 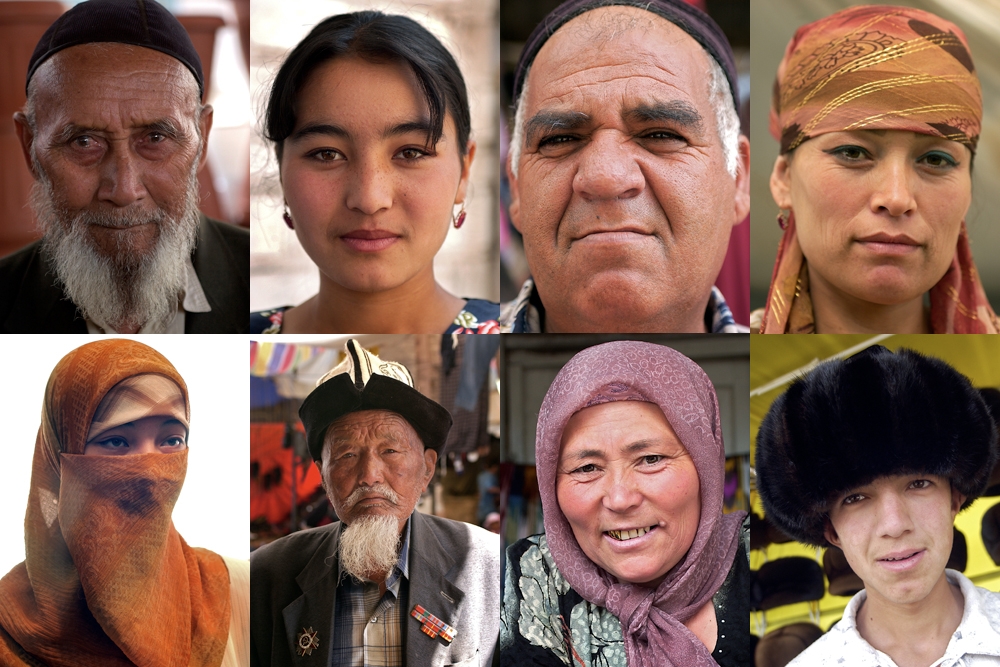 Shoppers and customers at the Osh bazaar include Kyrgyz, Uzbeks, Tajiks, Russians, Chinese, Lyuli, and many other ethnic groups. 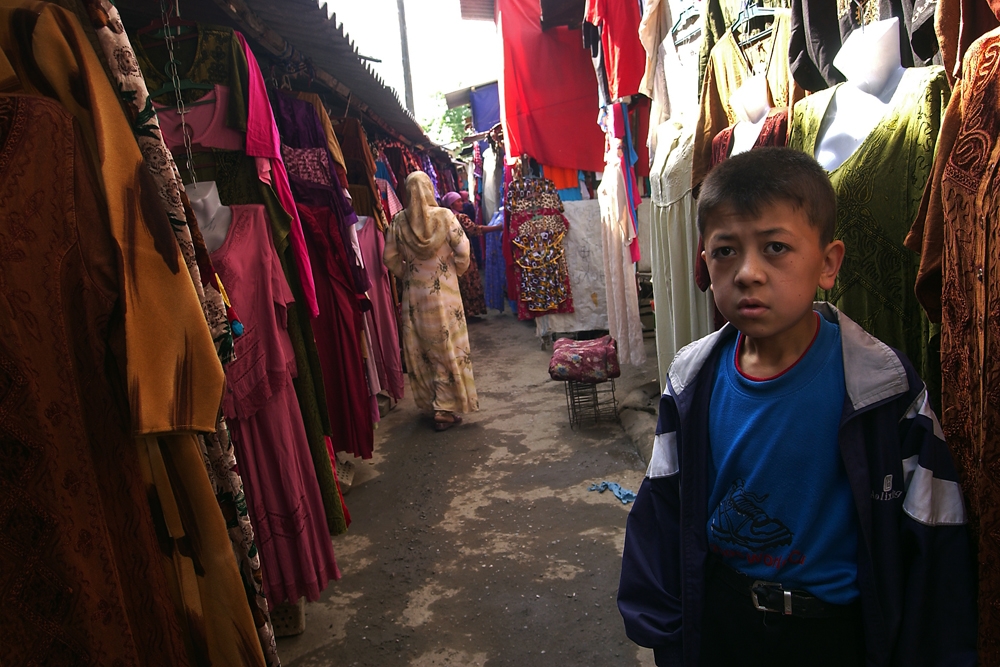 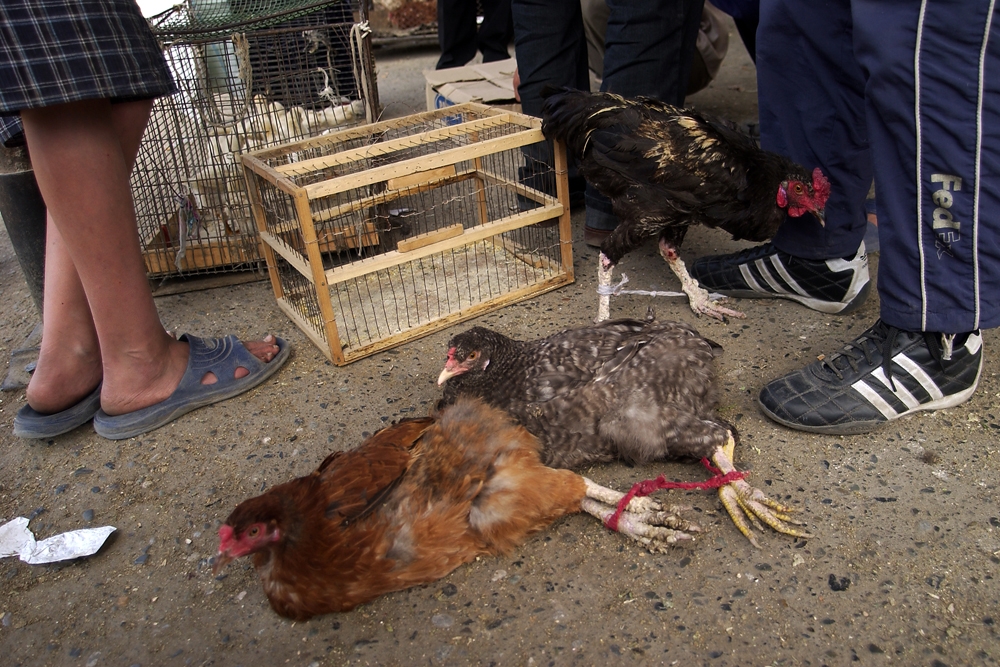 Live chickens and ducks are available to be butchered at home. 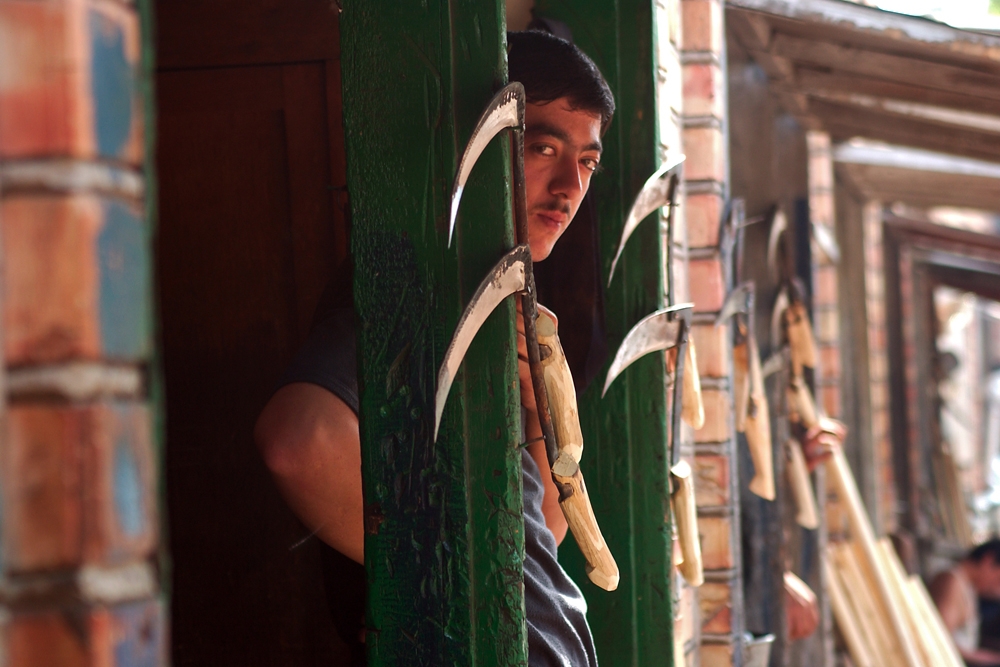 A blacksmith takes a break from hammering sickles and other sharp-bladed tools. 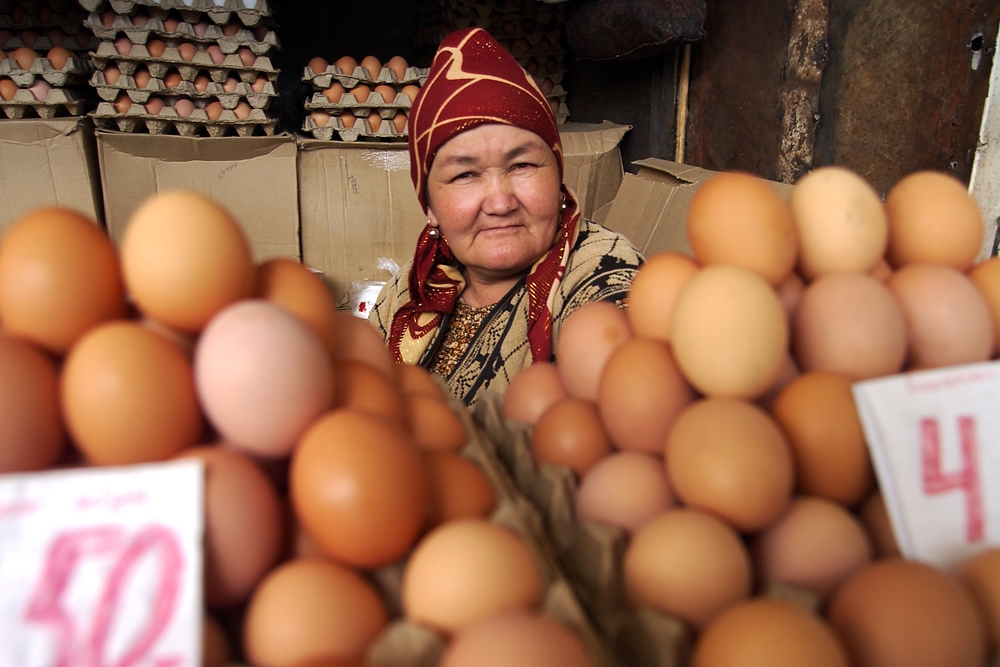 Most of the vendors selling fruits, vegetables and other food items - excluding fresh meat - are women. 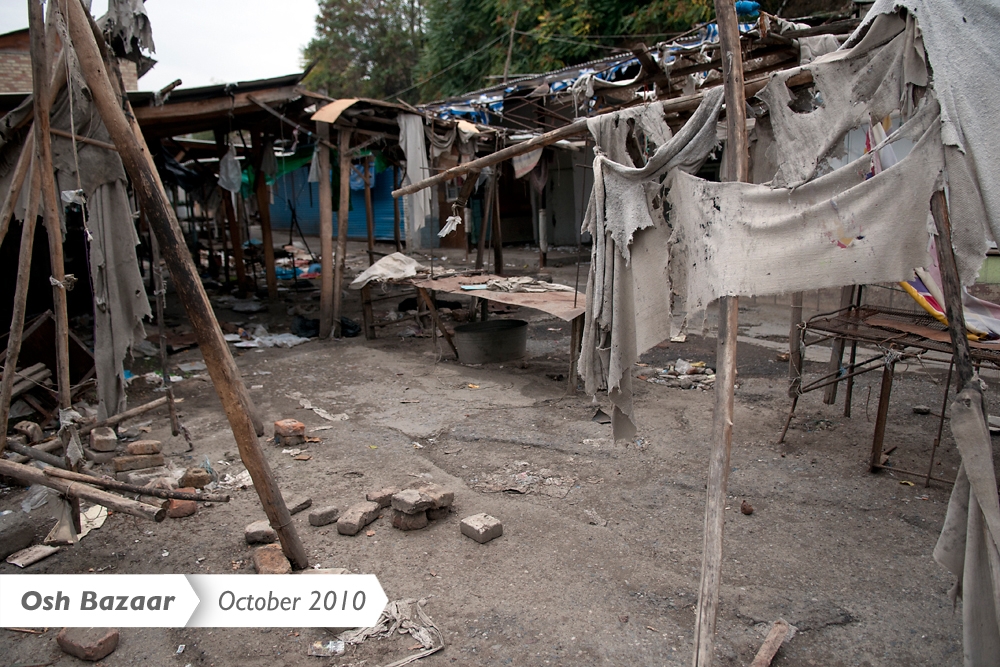 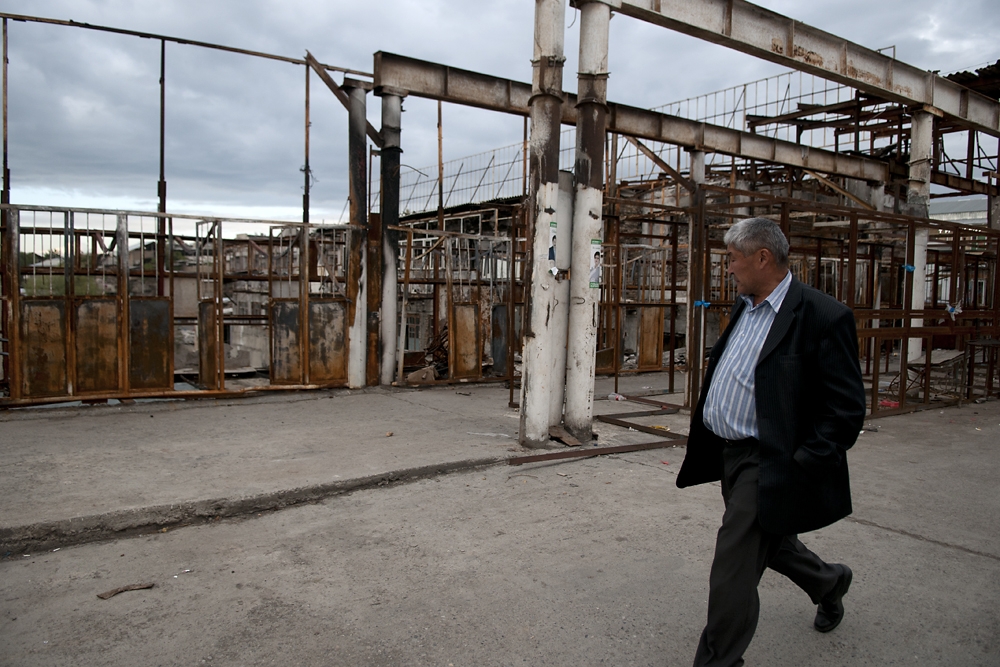 A man walks past the remains of a once-covered building in the bazaar. 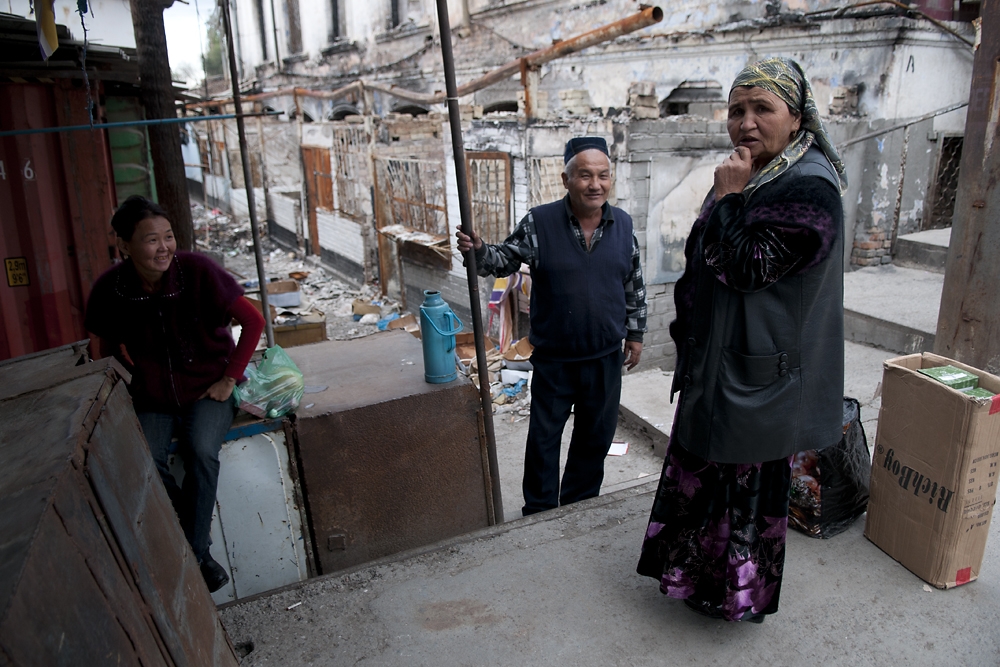 A few stall owners have returned to begin the rebuilding process. 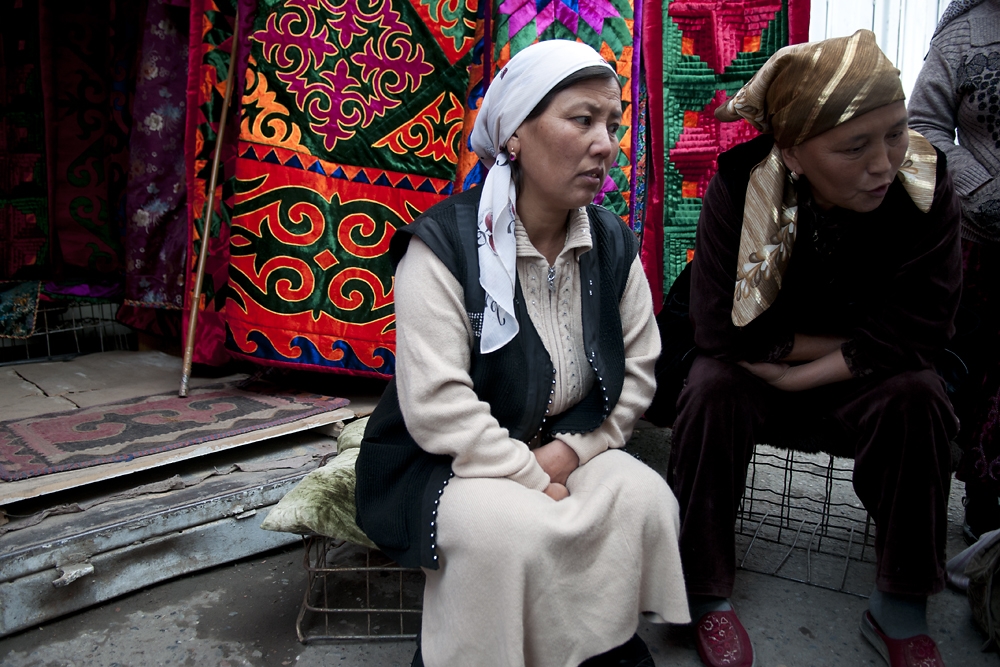 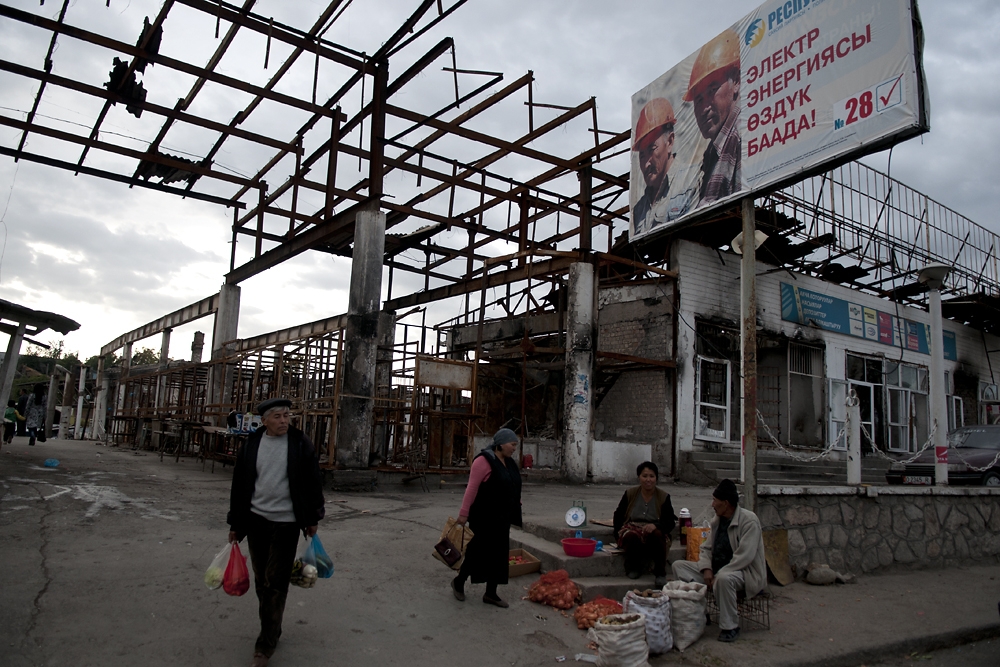 Sellers of potatoes and onions sit at one of the bazaar entrances and under a billboard advertising a political party campaign. 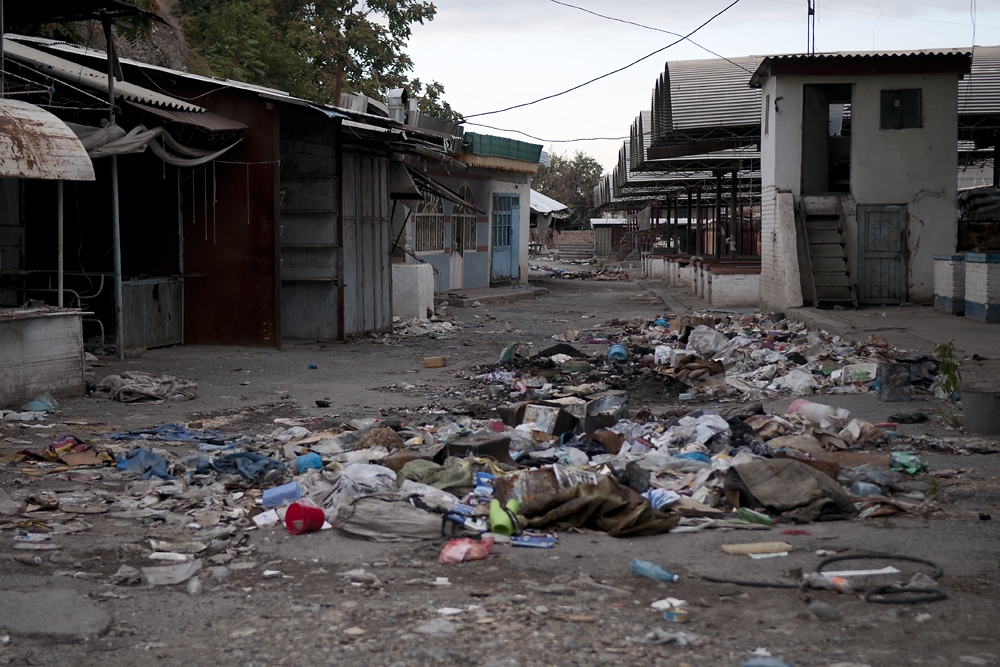 Garbage litters the concrete paths throughout the market. 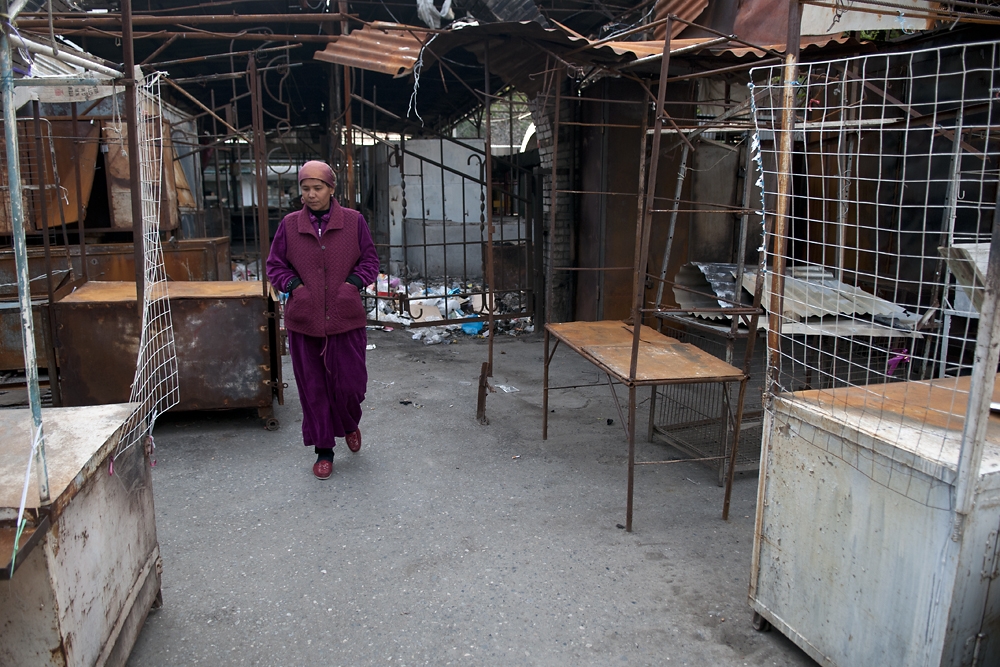 Almost all of the stalls in the bazaar remain empty and rusting. 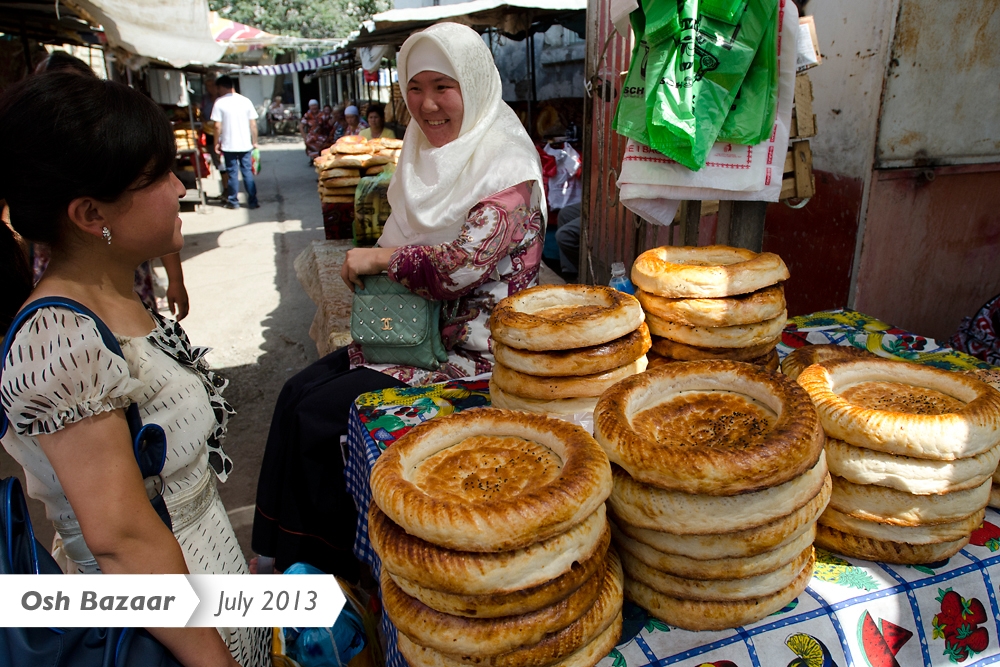 As the Osh bazaar continues its recovery, flatbreads are found in ample supply. 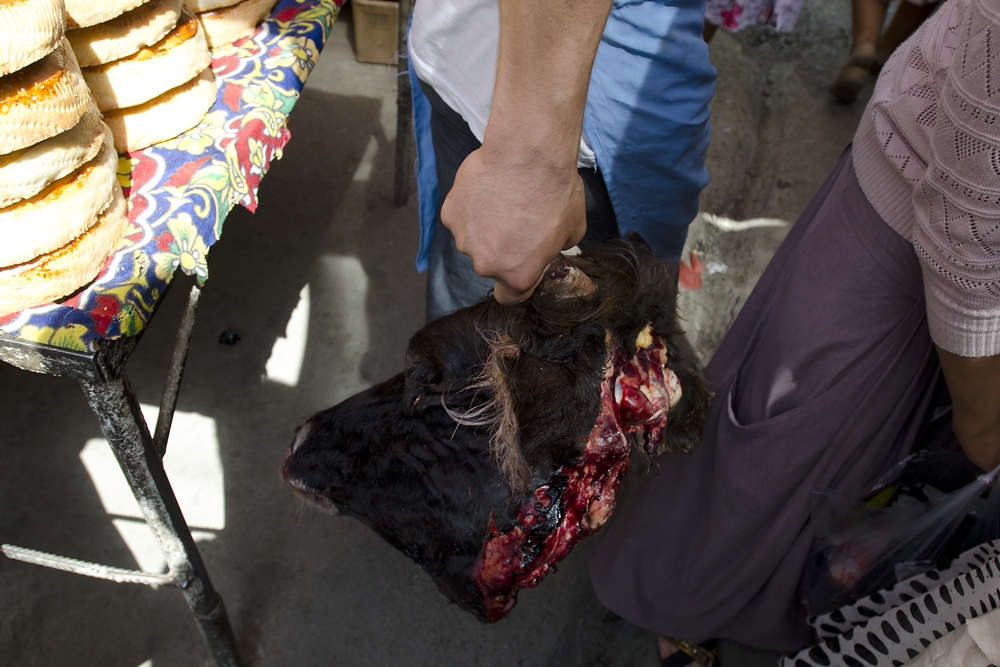 With a severed cow's head in hand, a butcher squeezes through a packed crowd of shoppers. 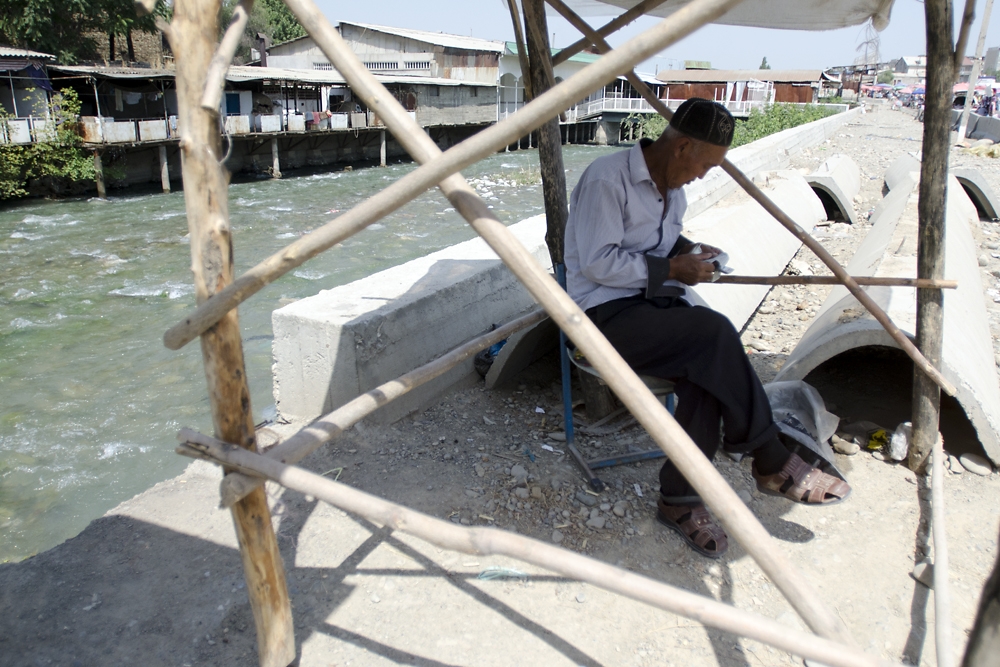 A man counts Kyrgyz som while sitting in the shade next to the Ak-Buura River, which cuts through the market. 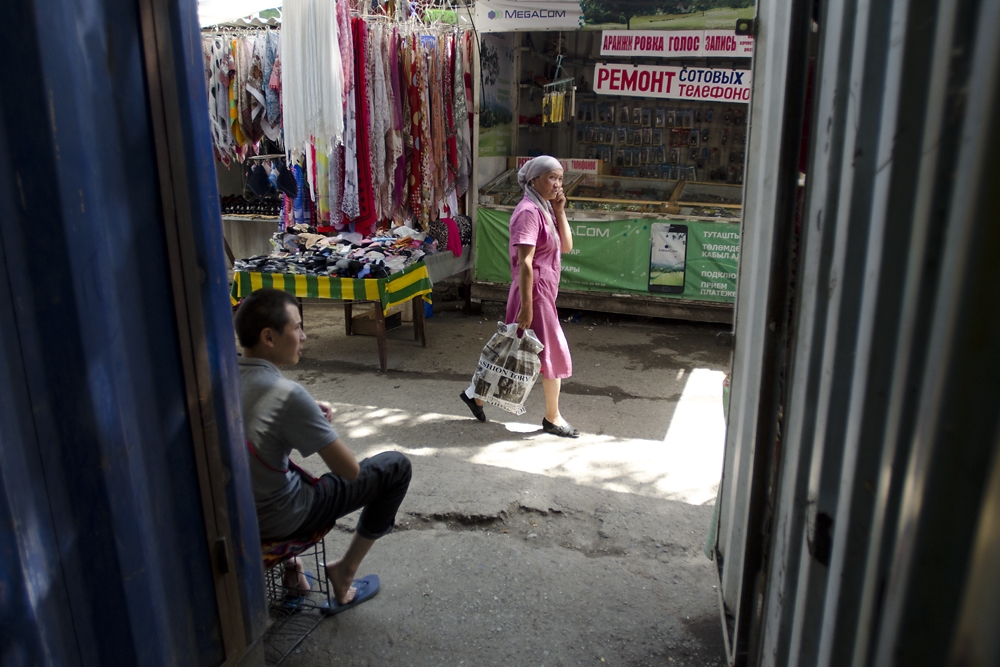 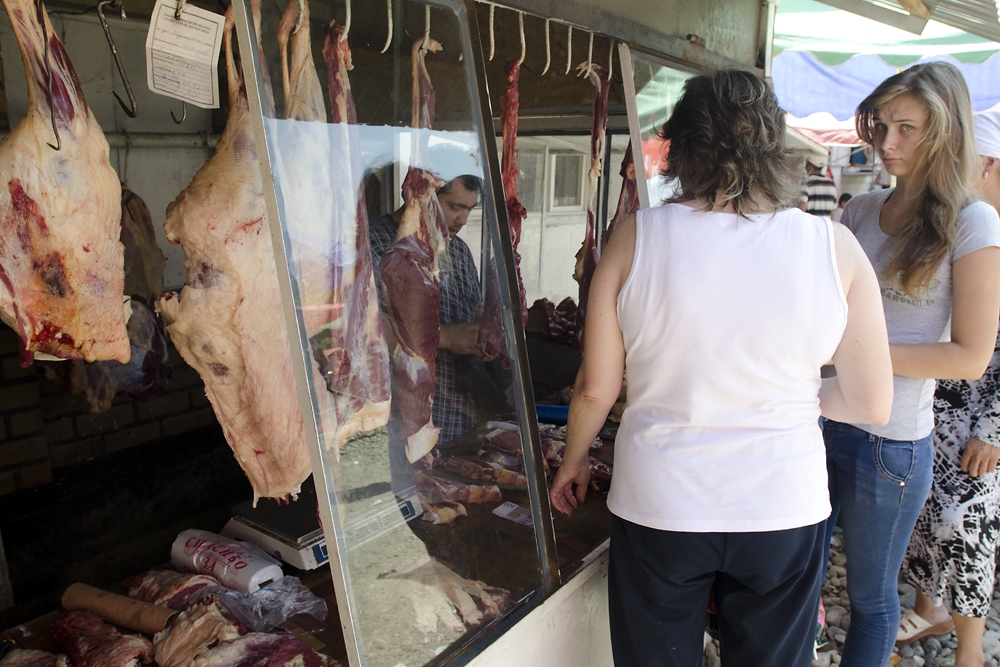 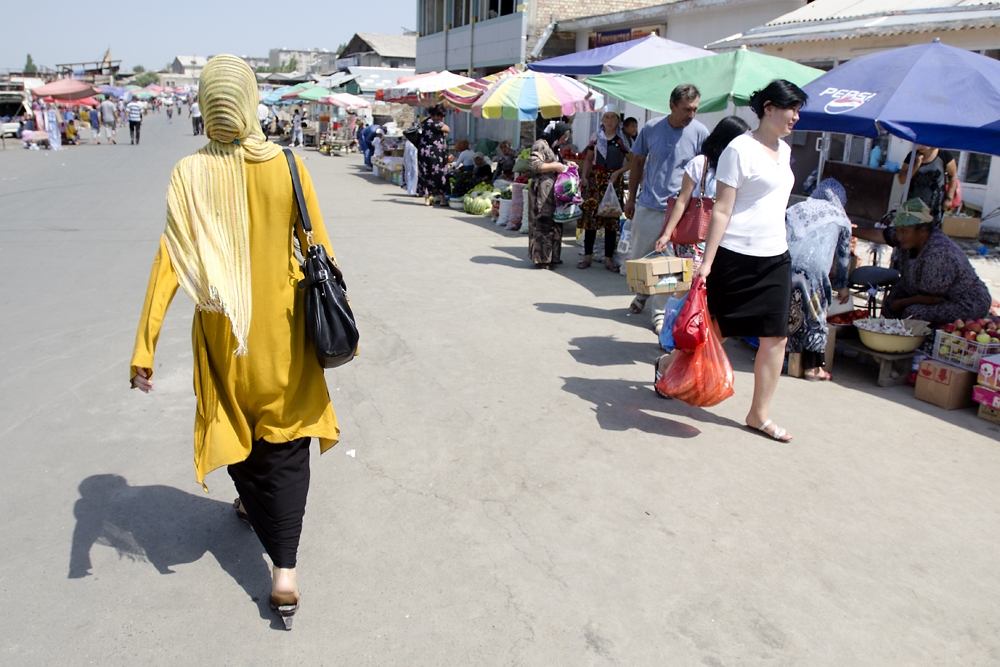 Although again the center of shopping in Osh, the famous bazaar seemed only half the size of what it once was. 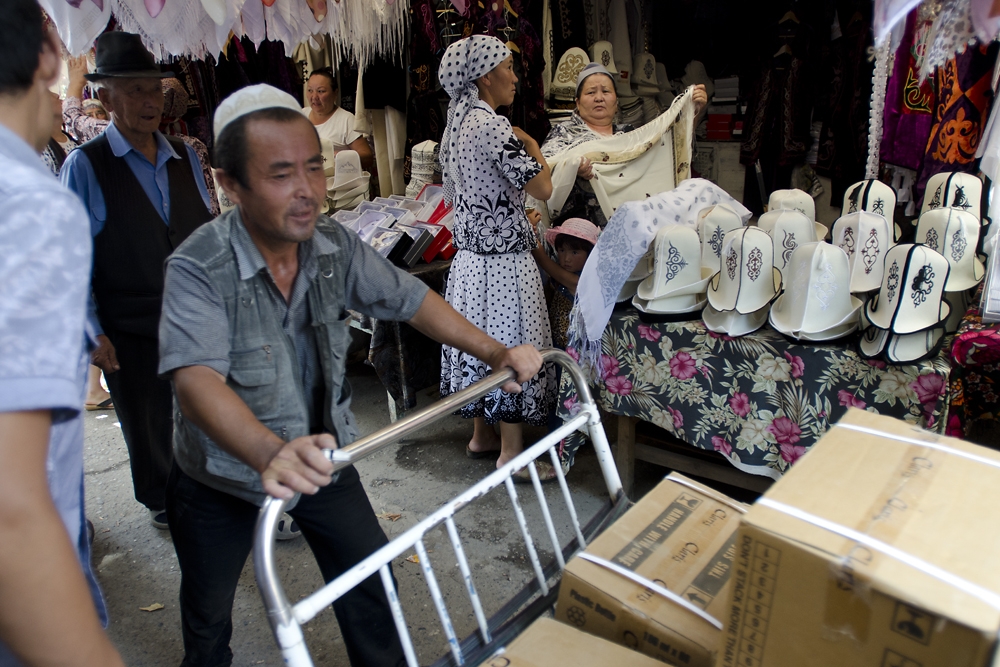 It was a local Uzbek reporter and friend who accompanied me to the famous Osh bazaar in Kyrgyzstan’s southwest during my first visit in June 2006. The sprawling shopping complex – centuries ago a key stop on the ancient Silk Road through Central Asia – straddles the Ak-Buura River north of the city center.

The smells of spices and rich hues of powdered dyes, the shoulder-to-shoulder crowds squeezing through narrow walkways, the banging by smiths of hammers on red-hot metal destined to become knives, and the haggling of smiling vendors and shoppers underscored the multicultural intensity of the market.

Kyrgyz, Uzbeks, Tajiks, Russians, Chinese, Lyuli, and many other ethnic and religious groups bought and sold goods – brought to market from Osh farmyards, Chinese factories and points in-between. During an afternoon of documenting the sights, I planned to purchase a traditional Uzbek hat, called a doppa, to add to the traditional Kyrgyz hat, called a kalpak, I had acquired several days earlier in the capital Bishkek. The flat doppa (also called duppi, kalpoq, or tubeteika) is worn by ethnic Uzbeks and others throughout Central Asia, but seen much less frequently now in southwestern Kyrgyzstan four years after the ethnic unrest hit the country in 2010. The real ones are typically made of black satin or velvet fabric and embroidered with white silk or cotton threads often in the shape of four chili pepper pods (kalampir).

But by the time I left Osh in the summer of 2006, I had forgotten to buy my doppa.

Four years and four months later, I was back in Kyrgyzstan’s largest southern city, reporting stories on the recovery of Osh following the clashes between Kyrgyz and Uzbeks in the summer of 2010. Osh’s once grand bazaar was now a torched and desolate landscape. Heaps of garbage littered the concrete paths between the scorched stalls, where torn fabric coverings and plastic sheets flapped in a light breeze. There was almost absolute silence in the middle of a market that once reverberated with the loud rumble of commerce, with sputtering cars and trucks, and with cackling chickens. Solitary men and women, empty-handed, now found ample room to navigate the market of shattered stands.

In one small corner, near the mini bus station and taxi stand on the main road on the southern edge of the bazaar, about 20 stalls sold eggs, bread, some meat, and a few varieties of vegetables. What seemed to have recovered the quickest were a dozen metal shipping containers filled with tourist souvenirs of brightly-colored handmade satin table cloths, carved wooden trinkets, and Kyrgyz kalpak hats – but no Uzbek doppas.

I left dejected at seeing how this once flourishing multicultural and multi-ethnic market had been plundered, ripped apart, and burned to the ground. It was also disappointing to once again leave the market without an Uzbek doppa.

During my most recent visit to Osh in August 2013 on a trek across Uzbekistan and Kyrgyzstan, I visited the market again – this time with several friends on a London-to-Mongolia car rally in need of stocking up on food and buying souvenirs.

I had a very personal, and what I thought would be a simple, quest – return to the bazaar to buy that hand-stitched doppa I had neglected to purchase during my first visit seven years earlier and could not find in late 2010. Instantly I saw that the bustle from 2006 had returned. Sellers hawked fuzzy ducklings, melons the size of basketballs, fresh-cut beef and lamb, an endless supply of candies and sweets, thousands of crates of ripe multi-colored fruits, trolleys stacked with flat breads, imported household goods, bright headscarves, and almost everything else imaginable.

While the ancient market apparently had returned as the main shopping destination for Osh residents, the number of stalls had not yet reached pre-2010 levels. The spread of the bazaar seemed half the size of before. The most noticeable difference from before the destruction was the lack of cultural diversity. When once I had seen dozens of men wearing the Uzbek doppa hat and women donning traditional Uzbek rainbow-colored dresses called kuilak, the market seemed noticeably absent of the Uzbek influence it once had.

Weaving my way around the stalls, I finally asked a man, who spoke limited English, where I could find an Uzbek hat – a doppa. He paused, stared at me incredulously and muttered before walking away, “This is a Kyrgyz market. You will not find those here.”