Kyrgyzstan: Top cop goes from hero to zero amid suspicions of set-up

The officer who negotiated the end to a bloody standoff with Kyrgyzstan’s former president is now being held for abuse of office. The flimsy evidence suggests the government needed a fall guy. 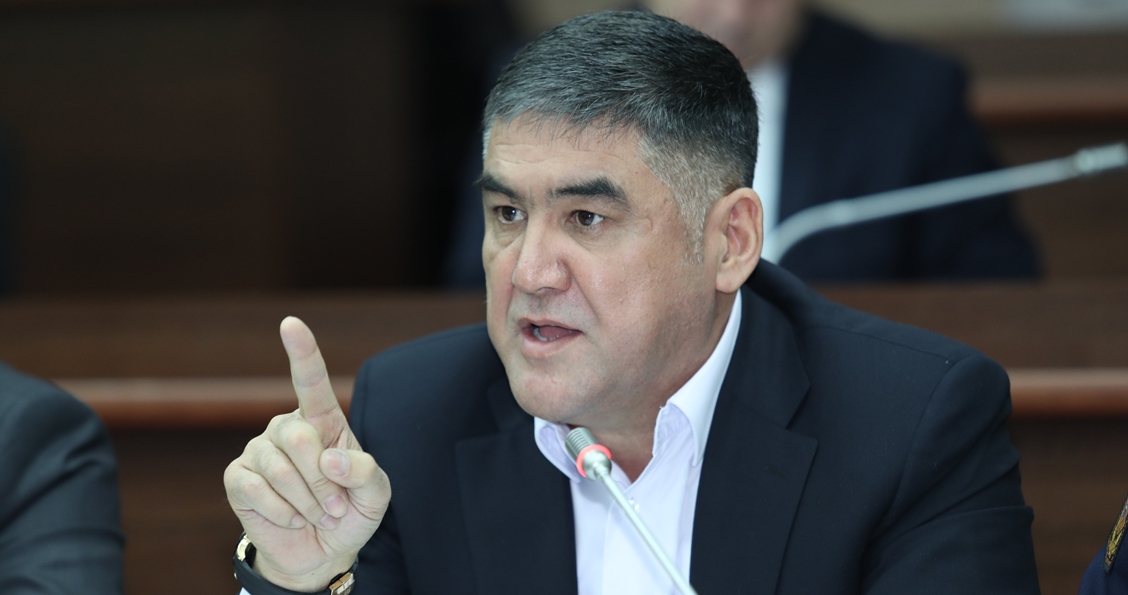 One week is all it took for one high-ranking police officer in Kyrgyzstan to go from national hero to criminal suspect.

Talking through serried bars blocking the way to an upstairs safe room, Asanov, who was then deputy head of the Interior Ministry, pleaded with his ex-boss to give himself up.

“Nobody will touch your guys. I will keep my word to the very end,” said Asanov.

A while later, Atambayev emerged from his bunker to reach a waiting car belonging to the State Committee for National Security, or GKNB. When he reached the ground floor, Atambayev was surprised to see the Interior Minister, and Asanov’s boss, Kashkar Junushaliev. “So, you’re here too, Kashgar,” Atambayev said.

It was a low-key ending to almost 48 hours of high drama. On August 7, special forces troops were dispatched to the Koi-Tash compound to enforce a police summons for questioning that Atambayev had ignored three times. They met fierce resistance from hordes of men loyal to Atambayev. One soldier was shot dead, in circumstances that remain unclear. Many dozens, among both government forces and Atambayev’s men, were injured.

The day after, shell-shocked officials were grilled by angry parliamentarians. Orozbek Opumbayev, the head of the GKNB, got most of the flak over the failed raid. Tensions were high amid uncertainty over whether the government would risk another, possibly even more bloody, operation.

On day one, media were able to provide live, from-the-scene video accounts of what was happening in Koi-Tash. On August 8, authorities took more precautions. Many journalists were prevented from reaching the scene. Telecommunications were down around the area. Toward the evening, it became clear that a repeat episode of mass violence had been averted. Atambayev came along of his own will.

Five days after the crisis ended, Asanov was fired. The Interior Ministry said in a statement he had “betrayed the country’s interests.” On August 14, news emerged that military prosecutors were investigating the ex-deputy minister on suspicion of abuse of office. The Pervomaisk court in Bishkek ruled that he should remain under house arrest until October 13. His former bosses then stuck the knife in, saying Asanov had exploited the whole episode to engage in reputation-boosting theatrics and had disobeyed the orders of his superiors.

Asanov’s ex-wife, Zhypargul Barigbayeva, said that her former spouse was being accused unjustly and that he had always put the interests of his country even above those of his own family.

“Kursan Asanov got caught between two sides and has been unjustly accused. People should first value a man’s work and service. He served for 33 years,” Barigbayeva said. “He rose from a rank-and-file soldier to a general in rubber boots and many times risked his life for his country.”

Asanov was also targeted in less direct ways. In the evening of August 13, a video began to circulate on the WhatsApp messaging app. The video alleged that Asanov had cut a secret deal with Atambayev. Following these confidential exchanges, Asanov is alleged to have been given a pink carrier bag emblazoned with the word Monaco.

“Like a rat, he carried away a CARRIER BAG containing (1) cash (2) jewels and gold (3) secret documents,” read one video intertitle, written in yellow and red Comic Sans font.

Commenting on this bag, Kunduz Zholdubayeva, an aide to Atambayev, said it contained only documents that the former president might need during questioning.

Prosecutors have now widened their probe into Asanov. His 22-year-old bodyguard, Damirbek Paizylduu uulu, was detained on August 21.

And at the end of the month, prosecutors issued an arrest warrant for Asanov’s 22-year-old son, Mukhammed-Ali, who had left for Moscow and enrolled in a college course there. It was Mukhammed-Ali who took possession of the mysterious carrier bag and thereby became an accomplice to the unlawful handling of documents, investigators say.

On the day the warrant was issued, the General Prosecutor’s Office released a video, mixed with ominous music, showing the movements of Mukhammed-Ali and Paizylduu uulu as caught by a slew of security cameras.

The narrative laid by prosecutors is that Atambayev’s people secretly handed over potentially incriminating documents to Asanov, who is then alleged to have passed these on to his bodyguard. And then Mukhammed-Ali later arranged a nighttime rendezvous with Atambayev’s assistant in Bishkek to give back the papers.

But people who have scrutinized the prosecutor’s video account are perplexed by multiple inconsistencies. The timestamps indicate, for example, that the alleged chain of actions was edited out of sequence, possibly to imply suspicious behavior where there was none. In one section of footage that purportedly shows Mukhammed-Ali in his car passing a package, neither he nor the plates can be clearly seen.

Felix Kulov, 70, a seasoned security veteran who has variously served as prime minister, interior minister and head of the security services, has said Asanov may have been fingered as the fall guy to cover the blushes of the officials who bungled the Koi-Tash operation.

“If the minister [Junushaliev] was in charge, he should have given Asanov the order to return to his post when he had come out of the negotiations [with Atambayev]. But instead, the minister just disappeared. But then at the press conference, he declared that Asanov acted of his own initiative,” Kulov told independent news website Kaktus. “Questions arise here about the subjective perspective and jealousy of the minister.”

Kulov argues that as a former MP in Atambayev’s SDPK political party, Asanov was uniquely positioned to talk the former president into ending the confrontation.

“Atambayev had a certain level of trust in him. Atambayev would not have trusted Junushaliev from the outset, because he had back in the day fired him and replaced him with his bodyguard,” Kulov said.

Asanov’s lawyer, Ikramidin Aitkulov, took a similar line and said that his client was being hounded simply for being too popular.

“The talk is about how the leadership of the Interior Ministry and the GKNB should leave their jobs for allowing this to happen. They understand this and want to pin the blame on Asanov, so they can stay in their jobs,” Aitkulov told Eurasianet.

As it happens, Aitkulov, a well-known lawyer with around 15 years’ experience working with and for government bodies, including the GKNB, was himself informed on August 22 that he is being investigated on suspicion of fraud. He has been placed under house arrest until October 21.