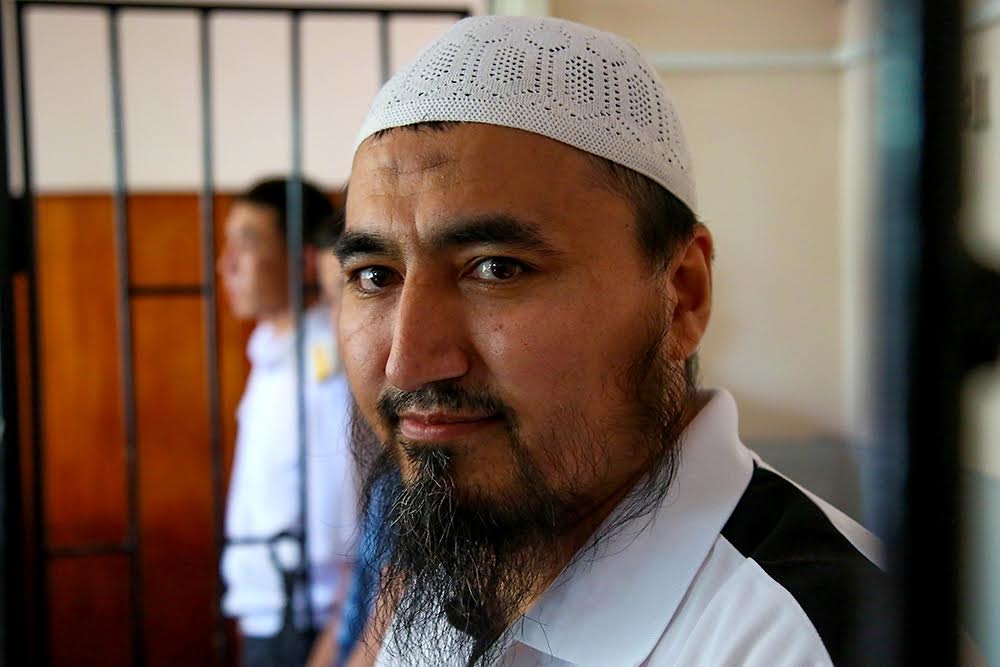 Imam Rashot Kamalov awaits the start of a court hearing in the town of Kara-Suu on August 4. Kamalov is facing charges of inciting religious hatred and disseminating extremist materials, accusations that he denies. (Photo: Peter Leonard)

Squeezed onto narrow benches in an airless courtroom in a provincial town in southern Kyrgyzstan, dozens of men from Imam Rashot Kamalov’s congregation looked bewildered as a disorderly hearing unfolded.

Kamalov stood silent in the defendant’s cage as his lawyers pleaded helplessly for a fair hearing on the charges of inciting religious hatred and disseminating extremist materials. At a hearing on August 4 in Kara-Suu, the presiding judge summarily dismissed witnesses hoping to speak on Kamalov’s behalf, and ignored expert testimony presented by the defense team.

The accusations against the 37-year-old imam of Kara-Suu’s As-Sarakhsi Mosque are not unusual for Kyrgyzstan. But Kamalov is a prominent and hugely popular religious authority. His stature ensures that his trial is a landmark in a crackdown on independent Muslim voices.

The state’s case so far hangs on one piece of evidence found during a raid on Kamalov’s home by armed special operations forces in February. The search turned up a disk carrying a video recording of an 18-minute long sermon, titled “About the Caliphate,” delivered by Kamalov at the As-Sarakhsi Mosque during Friday prayers on July 4, 2014.

Speaking in his office in the city of Osh, Kamalov’s lawyer, Khusanbay Saliev, characterized the prosecution’s arguments as flimsy. The word “caliphate,” a term describing the universal state envisioned by the faithful in the early days of Islam, has come to be associated by those poorly acquainted with the religion with fanatical goals pursued by the Islamic State and other radical groups. Kamalov’s accusers suggest the imam was inciting his listeners to embrace such an extremist vision.

Saliev insists his client’s sermon drew on only established and mainstream religious works. “We appointed our own experts, and what they have said is that his words were canonical. That is to say, they were taken from the Koran or from the hadiths recognized by the Hanafi school,” he told EurasiaNet.org. Hadiths are the body of accounts of the Prophet Muhammad’s words and deeds, which serve as a supplement to the Koran.

Saliev said the prosecution’s position is further weakened by rules on how extremist content is identified. “Under the law as it currently stands … [extremist] material needs to be forbidden by a court decision. That material must then be sent to the Justice Ministry, which should then incorporate them into a register and issue warnings to the public,” he said.

Kamalov’s sermon is not on any list of state-proscribed material. “So now he is being tried for possessing extremist material that was not even recognized as extremist,” Saliev said.

Prosecutors have sought to address this inconsistency with testimony from a specialist with the State Commission for Religious Affairs. At a preliminary hearing on July 23, lead prosecutor Nurlan Abdyrazakov read out the written testimony, which concluded that Kamalov’s words were an unambiguous incitement to installing a caliphate, and therefore a threat to Kyrgyzstan’s security.

Making his argument, the specialist, Kanatbek Abdyraimov, quoted a passage from Kamalov’s sermon in which the imam said: “Those who say that there will be no caliphate shall be cast out of the religion. We must bow before those that created the caliphate.”

Kamalov’s lawyers say the words were indeed uttered, but that they were taken out of context by Abdyraimov. In a letter addressed to President Almazbek Atambayev on May 6, Kamalov wrote that his sermon was intended specifically to convey that “what Islamic State is doing and what is happening in Syria is not a caliphate.”

The defense is presenting its case under trying conditions. Such is the lack of space and staff at the Kara-Suu district court that hearings are being scheduled only once weekly. On August 4, post-lunchtime proceedings began late after a previous hearing ran over. As about 30 Kara-Suu residents piled into the cramped courtroom, they each took turns walking up to Kamalov’s cage and exchanging greetings and smiles. After some minutes, Judge Koichubek Zhobonov marched into the unventilated room with the top buttons of his white shirt undone and a black robe draped over his shoulders.

Two middle-aged women in turn took to the stand to testify about the search of Kamalov’s home, but the judge dismissed the pair because their names were not included on the list of pre-approved witnesses. One woman loudly berated the judge as she was escorted from the hall.

Throughout the hearing, the men sitting in the gallery grumbled protestations, drawing angry rebukes from the judge. Only one witness was allowed to testify in the end — 60-year-old Kara-Suu resident Nuridin Yusupov, who said that DVDs of the imam’s sermons were openly sold in the local market.

Yusupov told the court that Kamalov specifically made a point of telling the people of Kara-Suu to prevent their children from going to Syria to fight and that he had not called for the building of a caliphate.

In what they hoped would be a clinching maneuver, Saliev, the chief defense attorney, and his two colleagues presented several written testimonies. One was a note from the Spiritual Board of Muslims of Kyrgyzstan explaining the concept of the caliphate. Another was a forensic examination of the State Commission for Religious Affairs testimony by a Bishkek-based religious affairs expert. A third document comprised a series of recommendations to the Kyrgyz presidential administration by Moscow-based rights activist Vitaly Ponomaryov, who was present at the hearing.

Ponomaryov was denied the opportunity to speak when the judge upheld a prosecution objection arguing that no testimonies from foreigners were required, as there was enough expertise in Kyrgyzstan.

The judge gave a cursory glance to the papers before handing them over to the two-man prosecution team, one of whom spent much of the hearing typing into his mobile phone. To the indignation of the defense team, Zhobonov declined to admit any of the statements as evidence. As Saliev exasperatedly argued that the judge was not being fair, prosecutors laughed audibly.

With that, matters were brought to a close and a further hearing scheduled for August 11. That was canceled without advance warning, however. It is unclear when the trial will conclude.

Kamalov suggested in his letter to President Atambayev that he is being targeted for reprisal after speaking out against the security services and the police during a public assembly in Osh in mid-January that gathered to discuss religious extremism. A few weeks after that assembly, authorities detained Kamalov.

“I was given the chance to speak, so I said that certain law enforcement officials have turned the war against this problem into a private business,” Kamalov wrote. “This is leading to a loss of trust in the authorities and causing young people to leave for Syria in the belief that the caliphate and sharia laws are in force there.”