Debates about women’s bodies recur periodically in Kyrgyzstani social media skirmishes; now there are signs that policymakers are eager to get involved. 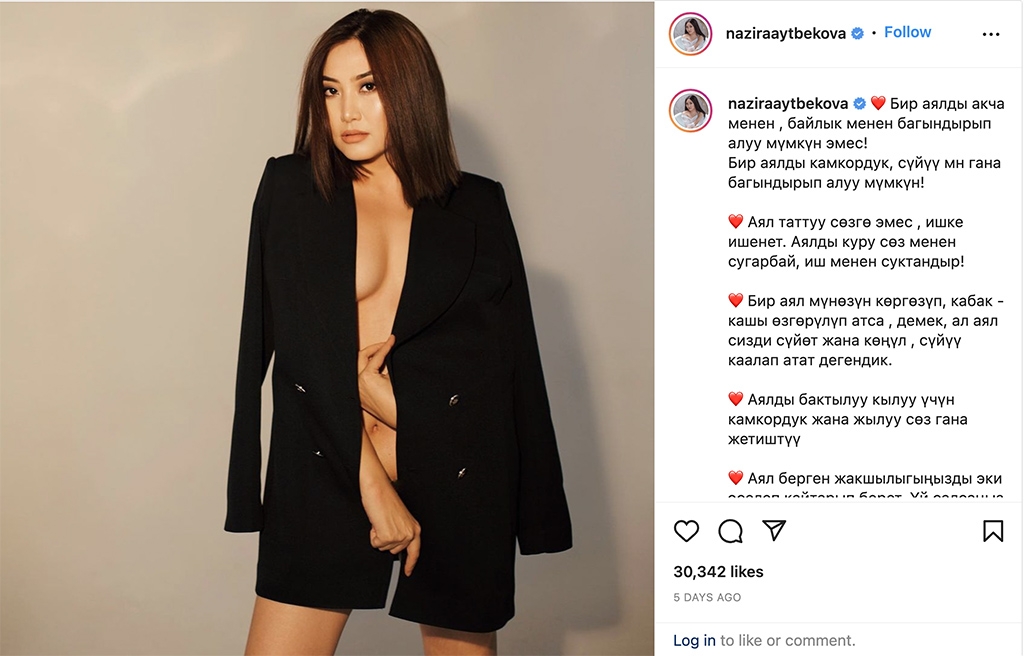 The patriarchy is not pleased. (Nazira Aitbekova/Instagram)

The Instagram post that dragged Nazira Aitbekova, a well-known TV presenter in Kyrgyzstan, into a whirlwind of a morality debate was anodyne, motivational poster-style fare.

“It is impossible to win over a woman with money and wealth!” she wrote. “A woman can only be won over through love and care.”

It was the image accompanying the text, which showed Aitbekova wearing nothing but a jacket draped strategically over her shoulders, that got many followers hot under the collar.

Traditionalists rushed in droves to condemn what they deemed an exhortation to licentious behavior. “Her parents and family must be mortified by this shameless bastard,” one commenter wrote.

Aitbekova was not cowed. Instead, she doubled down with a follow-up post on December 8 in which she articulated an indignant manifesto against the concept of uyat, the Kyrgyz word meaning shame.

That response generated only more heat as thousands took to Aitbekova’s Instagram to leave messages of support or condemnation.

But negative comments, including from other celebrities, prevailed. Comedian Meder Kamchybekov advised Aitbekova to seek consolation in religion. “Having intimate relations without marriage is bad. May God give you faith and lead you to religion,” Kamchybekov said in a comment that garnered around 1,000 likes.

Corporate accounts got involved too. The social media manager for Leader NK, a private education company, advised Aitbekova to “be a good person in clothes and avoid meddling in other topics.”

The presenter responded to this wave of criticism with yet another post. “You need naughty girls like me! If you don’t get this kind of shock therapy, we will turn into Afghanistan!” she wrote, before announcing an online solidarity campaign under the hashtag #Чечингиле (#getundressed).

This appeal made little headway, with only a small number of people obliging by uploading images of themselves to various social media platforms.

Asanova also loaded a post on Instagram with an old picture of Aitbekova dressed in traditional female Kyrgyz garb and remarked that this clothing suited the presenter much better. In another post, Asanova didn’t mention Aitbekova by name, but alluded to her in veiled fashion: “You are a Kyrgyz. As a Kyrgyz, you are defined by your language, your pure heart and your national dress.”

In remarks to Eurasianet, Asanova noted that she was not seeking to get embroiled in a personal dispute with Aitbekova, but that she was simply adopting a civic position.

Psychologist and sex educator Aikanysh Eraliyeva told Eurasianet that she saw in the welter of abuse leveled at Aitbekova evidence of a patriarchal desire to control women’s bodies and sexuality.

“Kyrgyzstan is a patriarchal country. Discussions about sexuality and bodies are off-limits. We are not taught in childhood and at school to talk about the body and personal boundaries,” Eraliyeva said. “And where there is no opportunity for freely expressing one’s own sexuality, photos like these will cause a sensation.”

Eraliyeva added that Aitbekova touched another nerve in Kyrgyz public life by engaging in excessively confrontational and even courageous behavior.

“After all, people do not like courage in others, and the manifestation of sexuality is also a matter of freedom, courage, and free choice. When we don’t like other people’s freedom, society liberally uses instruments of power and control. They say uyat,” she said.

Debates about decency in public life recur periodically in Kyrgyzstan through such social media skirmishes, but there are signs that policymakers are eager to get involved too.

In one of the first decrees that he adopted after coming to power, President Sadyr Japarov in January outlined his vision for a state-directed “spiritual-moral development” agenda. An action plan published by the Culture Ministry last week focuses heavily on patriotism, traditional values and work with young people.

“Our main objective is to inculcate the population with our nation’s cultural and historical values,” ministry representative Urmat Aitaliyev told journalists.

There are commentators who would like to see the state’s influence over this area of life extending to content disseminated through social media platforms. Blogger and journalist Aziret Osmonov, for example, has said the government should instruct people with large online followings on how to ensure their content is sufficiently moral, and that they should be held to account where lines have been crossed.

“The larger the audience, the greater the responsibility. It is because such explicit photos are not in keeping with our cultural attitudes that there has been such a sensation,” Osmonov told Eurasianet. “I believe that before any such post is published, our mentality and the views of our people should be taken into account.”