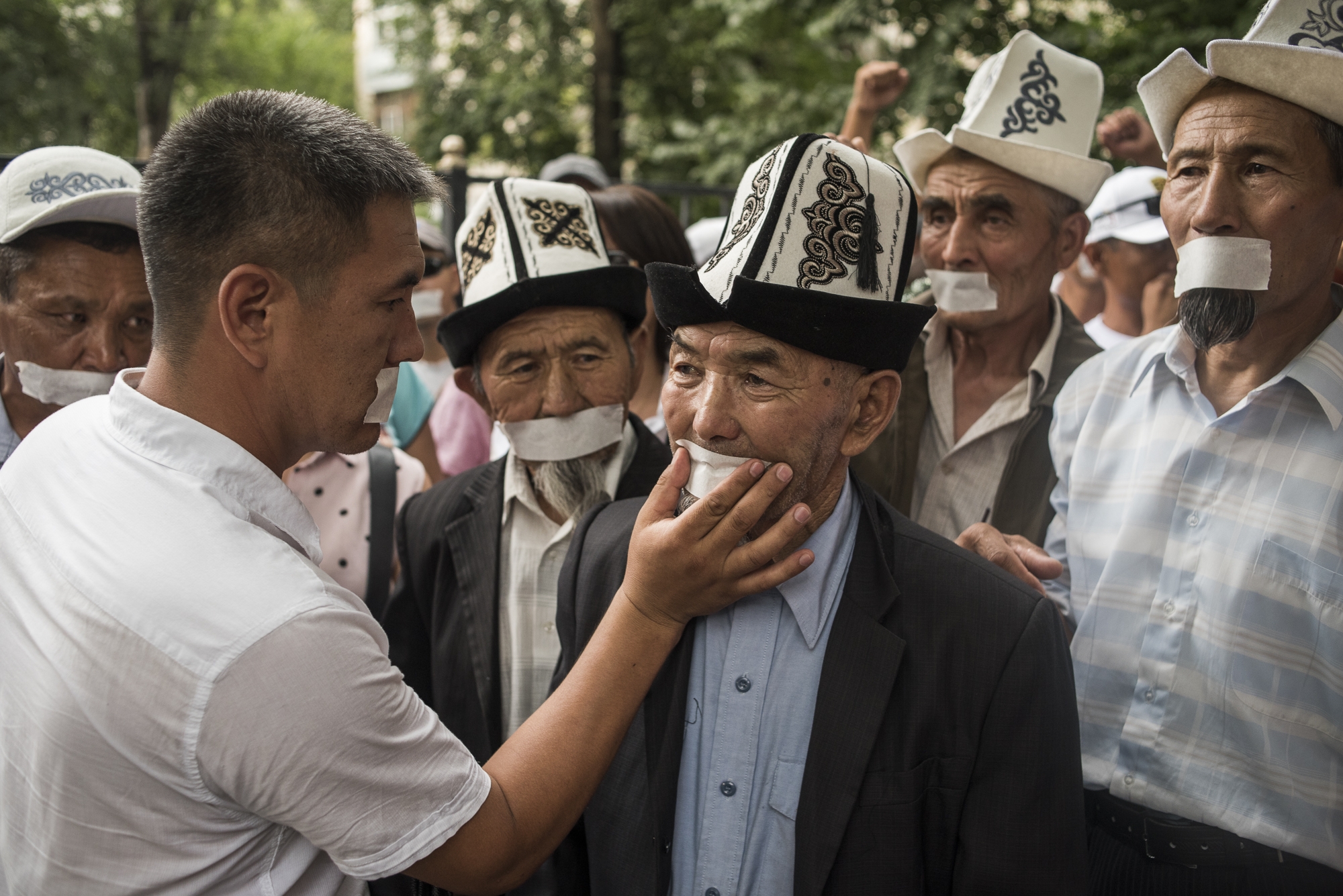 Demonstrators at a rally to protest the sentencing of opposition politician Sadyr Japarov on August 2. (Photo: Danil Usmanov)

A judge in Pervomaisky district court in Bishkek sentenced former member of parliament Sadyr Japarov to 11-and-a-half years in a high-security prison at the end of a trial that saw prosecutors advance accusations the defendant fomented unrest in the town of Karakol in 2013. In the end, however, Japarov was only found guilty on only one count — organizing the kidnapping of Issyk-Kul governor Emil Kaptagayev and subsequently using him as a hostage during a standoff with the authorities.

The alleged victim, Kaptagayev has in turn, for the duration of the trial, denied having any recriminations against Japarov and criticized the proceedings. Hours after the verdict was passed, Kaptagayev posted a Facebook status update to say: “Fairness in the justice system has died.”

Japarov has described the trial as a “political hit” and accused the judge of rushing through the proceedings and denying the defense the right to question two of its key witnesses in the dock.

“Just because they are putting me in jail, it doesn’t mean there will be any fewer politicians. Tomorrow somebody else will be dealing with these issues. It is only that this time will come later, that is all that makes me bitter,” he said.

Japarov’s lawyer has said they will appeal the verdict.

Japarov, a member of the nationalist Ata-Jurt party, returned to Kyrgyzstan in March after spending four years in neighboring Kazakhstan, where he was evading arrest for his alleged involvement in whipping up the 2013 disturbances in Karakol. The protest in question was mounted in a call for the nationalization of the huge, partly Canadian-controlled Kumtor gold mine, which accounts for a large chunk of the country’s economy.

At the start of April, prison officials said Japarov had attempted to commit suicide in prison. The state prison service stated that in the early hours of April 2, Japarov “slashed himself in the neck and left arm.” His cellmates reportedly immediately summoned officers in the detention facility when they saw the former member of parliament had lost consciousness.

Also on August 2, at the close of another trial at a court in Bishkek sentences were handed down to yet more opposition politicians found guilty of purportedly planning a coup in the spring of 2016. Members of the self-described People’s Parliament, former Agriculture Minister Bekbolot Talgarbekov and one-time presidential candidate Torobay Kolubayev, got 14 years in jail apiece. Ex-Finance Minister Marat Sultanov was sentenced to 10 years in jail. Other would-be co-conspirators Toigonbek Kalmatov and Alexander Gusev got five- and six-year suspended jail terms, respectively.

The trial for all these political activists was held behind closed doors, meaning no activists or independent observers could be present. As far as is known, the bulk of the prosecution’s case hinged on a series of wiretapped conversations that were posted online on YouTube without explanation in March 2016. Some of the accused insisted their remarks had been taken out of context, others said that sections of the recordings had been doctored.

“There was no real evidence of preparations for a [planned] seizure of power. The main thing we see is that the decision of the court was an order from the [Kyrgyz] White House,” said Adil Turdukulov, the head of the Bishkek-based Committee for Freedom of Speech.

And the government isn’t done yet.

There is yet another trial still ongoing against the most prominent opposition figure of the lot — Omurbek Tekebayev. The corruption trial is set to come to a close imminently and, given how the other cases have unfolded, a guilty verdict is all but certain.