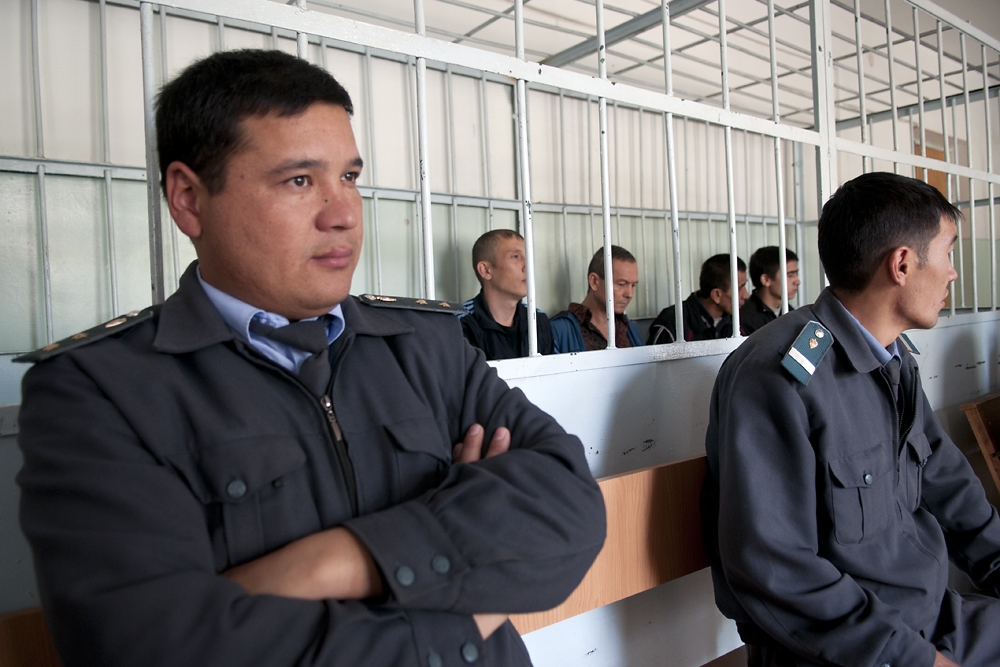 An Uzbek dies in Kyrgyz police custody. Officials deny wrongdoing, while human rights activists voice alarm. THEN WHAT? The cycle is all too familiar in southern Kyrgyzstan. Since ethnic violence between Kyrgyz and minority Uzbeks in June 2010, suspicious deaths of Uzbeks in police custody have emerged as an alarming trend, activists allege. A close examination of some recent cases, suggest thuggery is a common theme: many Uzbeks who died in custody were reportedly subjected to extortion attempts. In one recent instance, Mamataziz Bizrukov, 63, died in police custody on September 1 in Osh. Police say he suffered a heart attack. But Osh-based human rights activists argue Bizrukov was tortured and repeatedly beaten in his kidneys in an attempt to extort money. In a vexingly similar case, on August 7, Usmonzhon Kholmirzaev, an ethnic Uzbek Russian citizen, was taken from his home in Bazar-Korgon, about two hours north of Osh. Police demanded $6,000 from him, his wife alleged. After his family paid $680, he was released, but he died two days later from injuries allegedly sustained during incarceration. “They beat me to death,” he told his wife shortly before expiring, according to an account published by New York-based Human Rights Watch. “Kholmirzaev’s torture in police custody and his subsequent death are harrowing examples of the extent of corruption and impunity in Kyrgyzstan’s law enforcement,” said a HRW representative in an August 11 statement. “Do we need another person to die for Kyrgyz authorities to stop police from engaging in torture, extortion, and other deplorable practices?” Overall, HRW has documented seven deaths in recent months “in which police in southern Kyrgyzstan beat ethnic Uzbek detainees, tried to extort $2,000 or more, and threatened to press criminal charges, including charges related to the June 2010 violence, if victims failed to pay.” Thanks to HRW’s watchdog work, along with a statement of concern from the Russian government, the Kholmirzaev case drew the attention of the Kyrgyz Prosecutor General’s Office and the Interior Ministry. Central authorities eventually fired the Bazar-Korgon police chief and launched criminal cases against four local police officers, who have been charged with employing torture and abuse of power, but not with murder. They remain free pending judicial proceedings. A study released in May by the Kyrgyzstan Inquiry Commission (KIC), an independent body headed by Finnish politician Kimmo Kiljunen, found that of 470 documented deaths during the 2010 violence, 74 percent of victims were Uzbek. Yet “Uzbeks are more than 30 times more often accused of murder than the Kyrgyz,” said the report. The government dismissed the findings and banned Kiljunen from returning to Kyrgyzstan. Inter-ethnic relations in southern Kyrgyzstan continue to be marked by “deep mistrust,” explained Nick Megoran of the University of Newcastle. “Many Kyrgyz fear that Uzbeks want to separate Osh from Kyrgyzstan and evict the Kyrgyz, and, at the same time, many Uzbeks feel that they are treated as second-class citizens.” Megoran, who has researched nationalist tendencies in Uzbekistan and Kyrgyzstan, believes that “for trust to be rebuilt, justice and the rule of law need to be established.” At the moment, justice is hampered by a systematic bias in arresting and convicting ethnic Uzbeks, rights activists say. In Bazar-Korgon, a majority-Uzbek town near the Kyrgyz-Uzbek frontier, tension between police and residents is palpable. The murder of a Bazar-Korgon police officer amid the 2010 upheaval, and the subsequent arrest and conviction of his alleged killers in a trial marred by glaring irregularities, has left the town among the most tense in southern Kyrgyzstan, observers say. As the harassment continues, a sense of disillusionment has settled over Uzbeks in Bazar-Korgon. “The country is in ruins,” said resident Bakhtiyor Usmanbayev. He and his Uzbek friends do not trust the police. “The town’s police force is ethnically Kyrgyz, but the population mostly Uzbek.” Usmanbayev said. “After the murder of one of their colleagues, they [police] have wanted revenge. They don’t care if you are innocent. Just being an Uzbek makes you guilty in their minds. If we have a problem they would be the last people we would go to.” Human rights activist Azimjan Askarov, long a critic of police abuse in Bazar-Korgon, was tried for the murder and given a life sentence with four other ethnic Uzbeks. The Supreme Court dismissed an appeal, despite censure from Washington and Brussels. At Independence Day celebrations in Bazar-Korgon on August 31, turnout among Uzbeks was noticeably low. That angered local Kyrgyz, who criticized what they saw as a lack of patriotism among members of the minority group. “They don’t care about our nation. They would join Uzbekistan if they could,” a man calling himself Adylkan, said, reflecting widespread concerns among Kyrgyz, especially in the divided south. For many in Bazar-Korgon, the psychological scars of 2010 won’t fade anytime soon. “This town is majority Uzbek, but the Kyrgyz dominate,” said Usmanbayev. “As long as this is the situation, we [Uzbeks] will not have justice.”